What to do in Pavia

That Pavia 35 km south of Milan has not yet been swallowed by its cosmopolitan neighbour is a bit of wonder.  But Pavia, which for a brief period of a hundred years was the capital of the Lombard Kingdom, has retained a strong identity of its own. Here are our suggestions of what to do in Pavia.

Maybe it was the autumn colours, but at first sight the landscape around Pavia looked like a 17th century Dutch painting. Flat and wet with a grey mist rising over the plains and among the sparse naked trees. The city itself was also rather anonymous with broad boulevards and predominantly modern housing, but we decided to give it a try and stayed overnight at a hotel near the station.

Pavia is home to an ancient University, and it is supposed to possess ‘a vast amount of artistic and cultural treasures’, so there was something to discover. Even through the fabled Charterhouse of Pavia is a long way out of town. 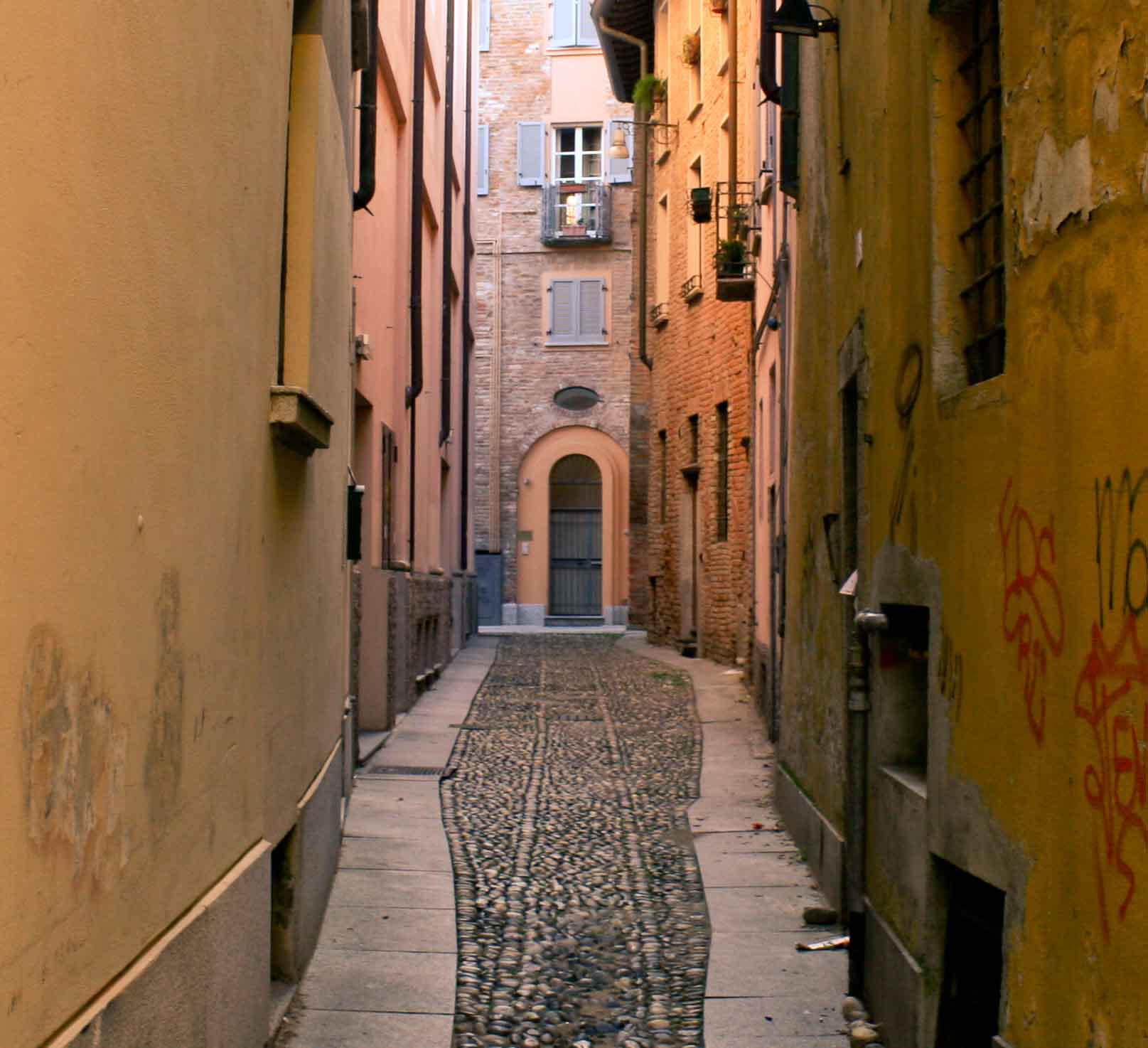 Narrow streets and cobblestones characterize the old part of Pavia.

Pavia’s main sights include no less than 7 important churches, but like many other travelers in Italy we had reached the point, where the idea of visiting another church becomes slightly sickening. Sometimes the architectural, historical and artistic riches of the country seem intolerable, and I for one need to sit by a lake side and feed ducks or go window shopping in chain store to revive my sense of adventure.

In other words – we did not enter any of the churches and therefore missed the relics of S. Augustine of Hippo that have been traded to a crypt in S. Pietro in Ciel d’Oro. As the patron saint of brewers, printers, theologians and sore eyes, he is quite a cult figure due to his conversion from a former life of loose living, which according to Catholic Online included parties, entertainment, and worldly ambitions.

We did get to see most of the churches from the outside though, and they were predominantly red brick. 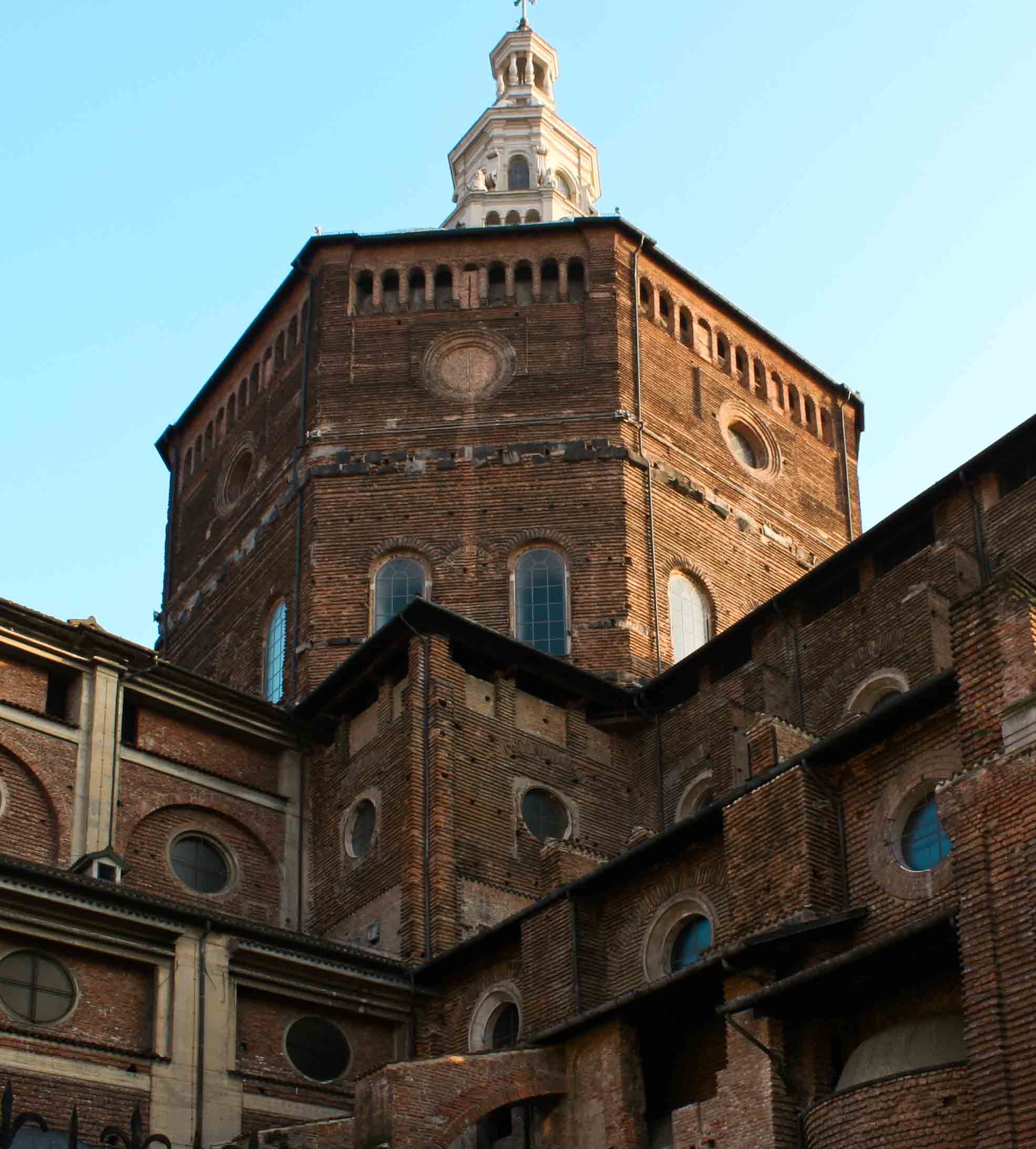 The cathedral of Pavia.

It was easier to compensate for the unholy mood by following the pilgrim route. The original Via Francigena was designed as a secure passage way from the Kingdom of Pavia to Rome. Later it was extended to Cantebury in England, and it became one of Europe’s main pilgrim routes, and as such it has experienced a recent surge in popularity. It still goes straight through the main shopping streets of Pavia, making is quite easy to combine spiritual experiences with more worldly pleasures. 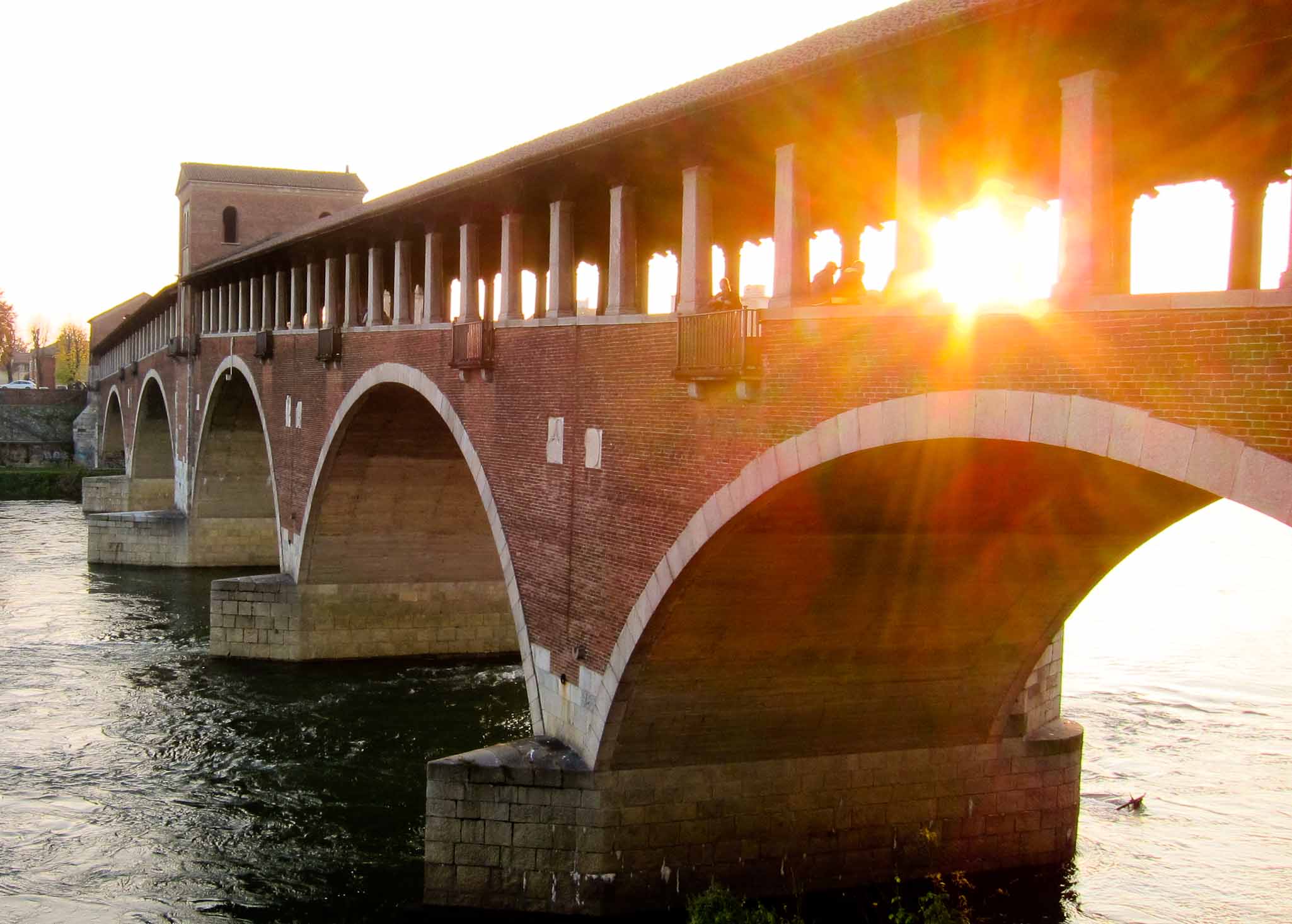 The Ponte Coperto in Pavia with a small chapel in the centre.

Hang around the covered bridge

Signs to Via Francigena can be seen all around the unusual covered bridge in the centre of the city, and the bridge itself is an interesting place to hang around. Pavia is located where the Po and the Ticino rivers meet, and the bridge has been there since Roman times. The current Ponte Coperto was built after the previous bridge had been demolished during WWII, and like its predecessor it holds a small chapel in the centre. A structure, that was cherished by Albert Einstein who spent a year in Pavia and is commemorated with a quote on the bridge. 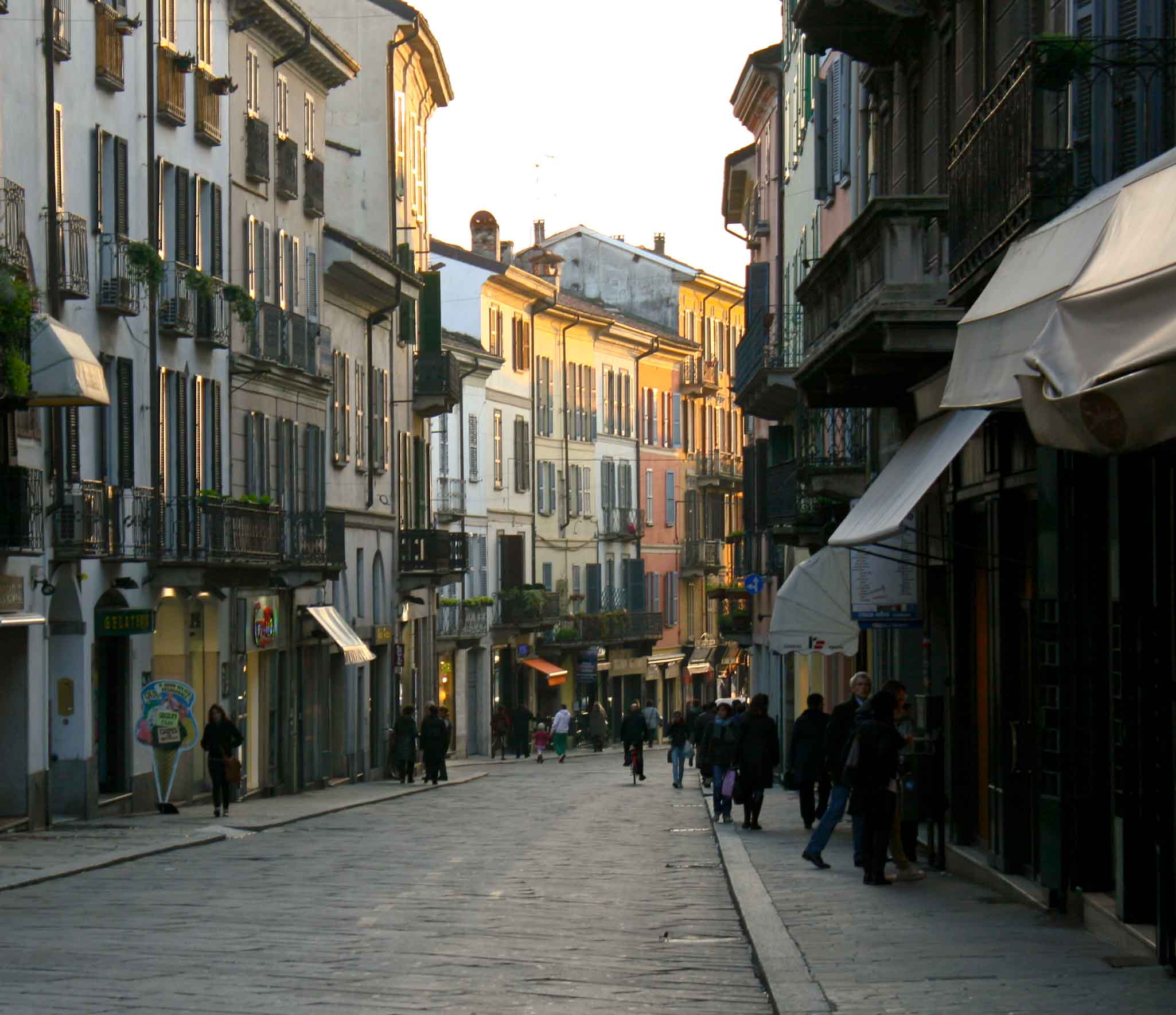 If you like artisan bakeries and breweries, shopping in Pavia is a treat.

Being close to Milan you would have thought that some of the fashion shops had rubbed off on Pavia, but that doesn’t seem to be the case. There are the usual chain stores you can find in any city all over Europe and also a few specialty shops selling Christmas decorations or artisan beer. It was the pastry shops, however, that really made me drool. 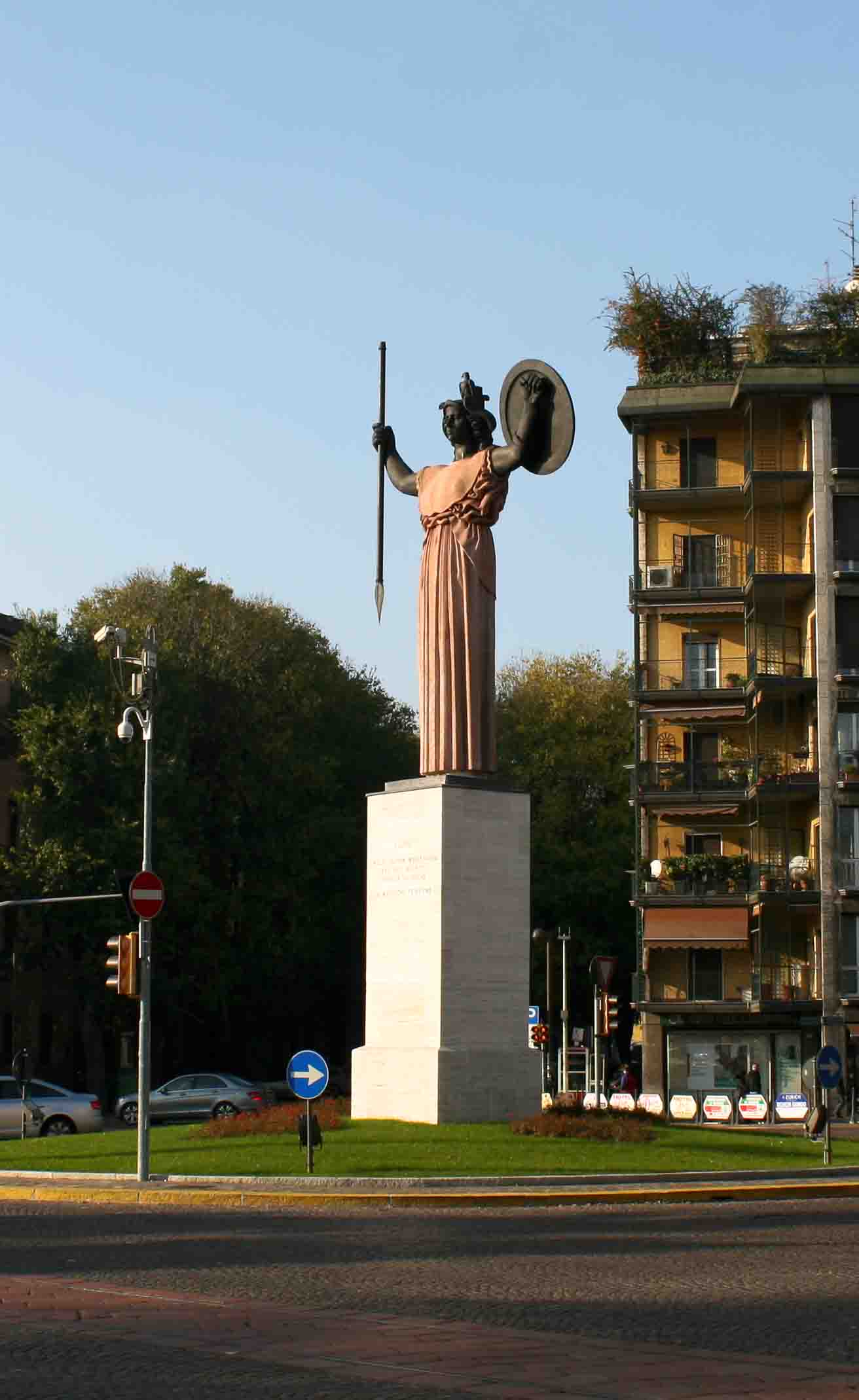 The Roman goddess of wisdom guards a roundabout in Pavia

Statues with a twist

The last thing I noticed about Pavia was their statues. In front of the cathedral there’s a looted antique equestrian monument called Regisole, which is ritually vandalized with yellow paint once a year, as a sure sign of a student fraternity and their sense of humour.

A strong Minerva with the traditional spear, shield and helmet stands as a policeman guiding the traffic in a busy roundabout. This Roman goddess of wisdom, art, trade and defense is considered a symbol of the city, along with another important female statue ie. the Lavendaia sul Ticino who keeps washing clothes in the river in the traditional fashion.

Finally there is the national monument dedicated to the city by the Cairoli family. The 7 brother in the family were all deeply involved in the Risorgimento and the unity of Italy, three of them formed part of Garibaldi’s Spedizione dei Mille and four died in battle as the sculpture vividly illustrates.

In other words, there are plenty of adventures and discoveries to be made in Pavia. Even when you seek to avoid the so-called main sights.