Watch Out For the

All over Italy ancient street shrines, known as Madonnelle, guard street corners and intersections. And they used to provide more than spiritual light.

It is said that there are thousands of Madonnelle in Rome alone, and they are almost as numerous in other big Italian cities. The figurines and paintings perched high up on the corner of houses and palaces, with a small canopy to protect them from the sun and the rain, have been part of Italian cityscapes for hundreds of years. They were originally installed to protect passers-by. And unlike other Madonna icons that gaze lovingly down at the Christ Child, the Madonnella directs her gaze at the viewer. This establishes a personal connection between the two.

The tradition of public devotional imagery on street corners derives from the ancient Roman custom of placing a painting or statue of a domestic deity – called lare – at each compita, meaning “crossroads.” Popular belief held that demons would come out of the underworld at night and hang around crossroads in order to haunt whoever they happened to meet. After dark, oil lamps in front of the street shrines would light up dark corners. As a result, the deities were seen as protectors of the community. When Christianity replaced paganism, the Madonnelle were used to bridge the gap and continue the tradition of placing lares compitales shrines at every crossroad. Now people just mumbled a prayer to the Madonnella, they happened to be passing, in order to protect themselves from evil. 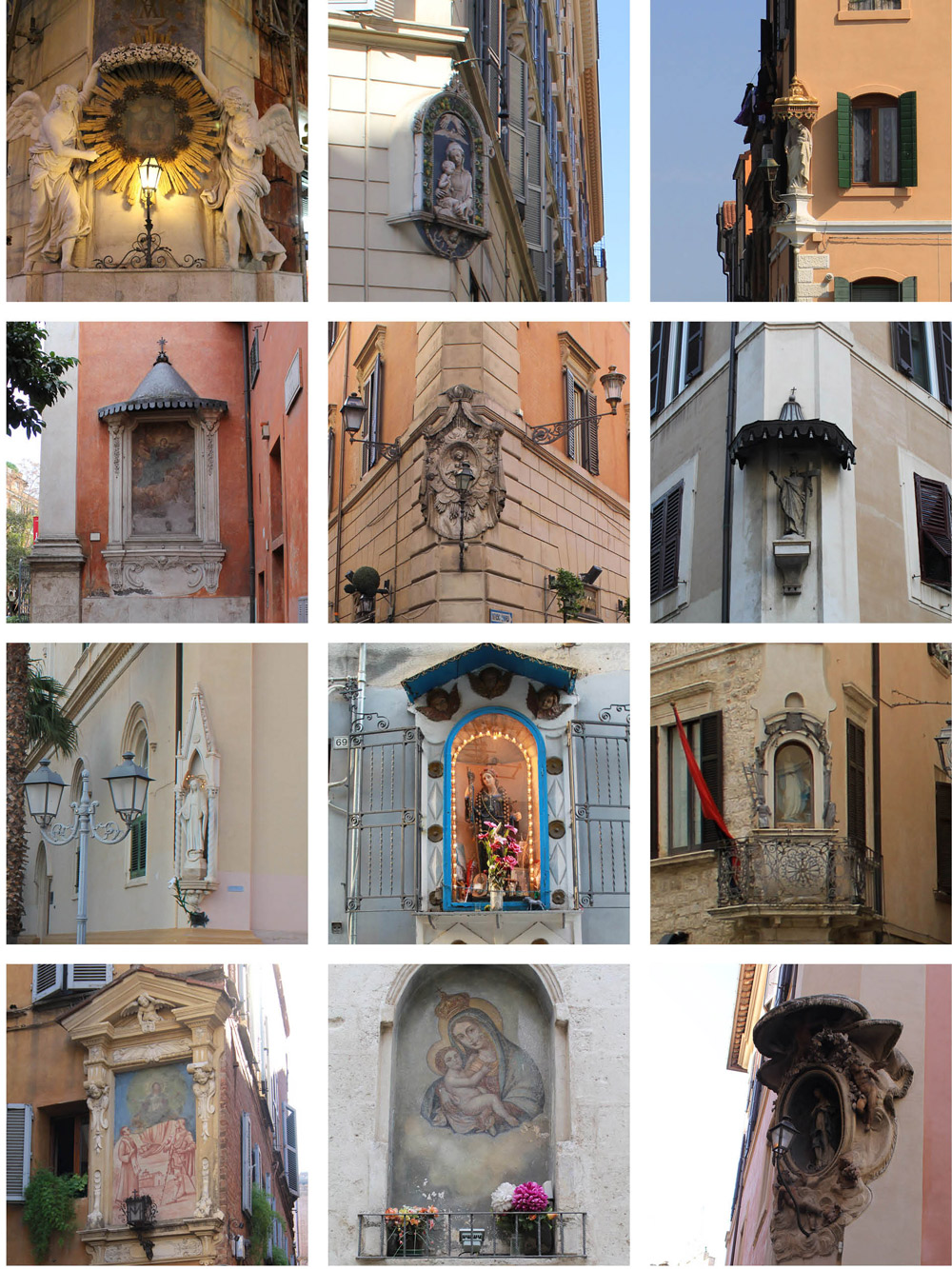 Most of the Madonelle were captured in Rome, but the top-left is from Chioggia, third line right to left is from Taranto, Palermo and Ascoli Piceno, bottom line right is from Siena and the middle one from Oria.

As the name indicates, the Madonnella is typically – but not just – a Madonna, Around the 16th century the church started to worry about the sacrilegious atrocities witnessed at night by these icons of innocence. In consequence, many of the so-called ‘edicole stradale’ were moved into the churches.

The people, however, demanded the presence of the Holy Virgin in the streets and soon new shrines were in place. They needed  the small lanterns placed in front of the Madonnelle to see them through the darkness after the sun went down, and saw the Madonnella as the protector of their community. Reflecting the style of the times, the new Madonnelle, which can still be seen today, were mostly baroque or neoclassical.

Miracles in the Streets

This goes for the Madonna of the Lantern at the base of the church on Tiber Island. In 1577 it is said that river water flooded the entire islands, but the lamp in front of the shrine kept burning. It even managed to remain lit underwater.

The Madonnelle have also been known to hit down hard upon vandals, who sought to damage the sacred images. Legend has it that a bocce player once became so infuriated by defeat that he threw a ball at a fresco of the Madonna leaving a mark under her right eye. For the next 40 days, his arm was paralyzed, and he could only move again after repentance.

The strangest and most famous prodigy took place in 1796, when several Madonnelle in different parts of Rome began to move their eyes. This was interpreted as a bad omen, at a time when the Pontifical State was threatened by Napoleon’s army. The phenomenon was carefully investigated by the religious authorities, who confirmed that a miracle had occurred in at least five instances.