A town close to but not quite part of Cinque Terre

Porto Venere is sometimes described as the sixth village of Cinque Terre, and it does share some characteristics with the five villages, but that’s not the only reason a Porto Venere merits a visit.

The main attraction in Porto Venere as in Cinque Terre are the breathtaking views. The coast from Monterosso al Mare to the Gulf of La Spezia is stunning with tall cliffs dropping, cutting or folding into the sea, ancient watchtowers, terraced lemon and olive groves, secluded sandy coves, and clusters of colourful houses surrounding natural harbours. Located on a rocky promontory, Porto Venere is mostly barren, but there are other sights waiting to be explored apart from the scenery. Here are a few suggestions of what to see. 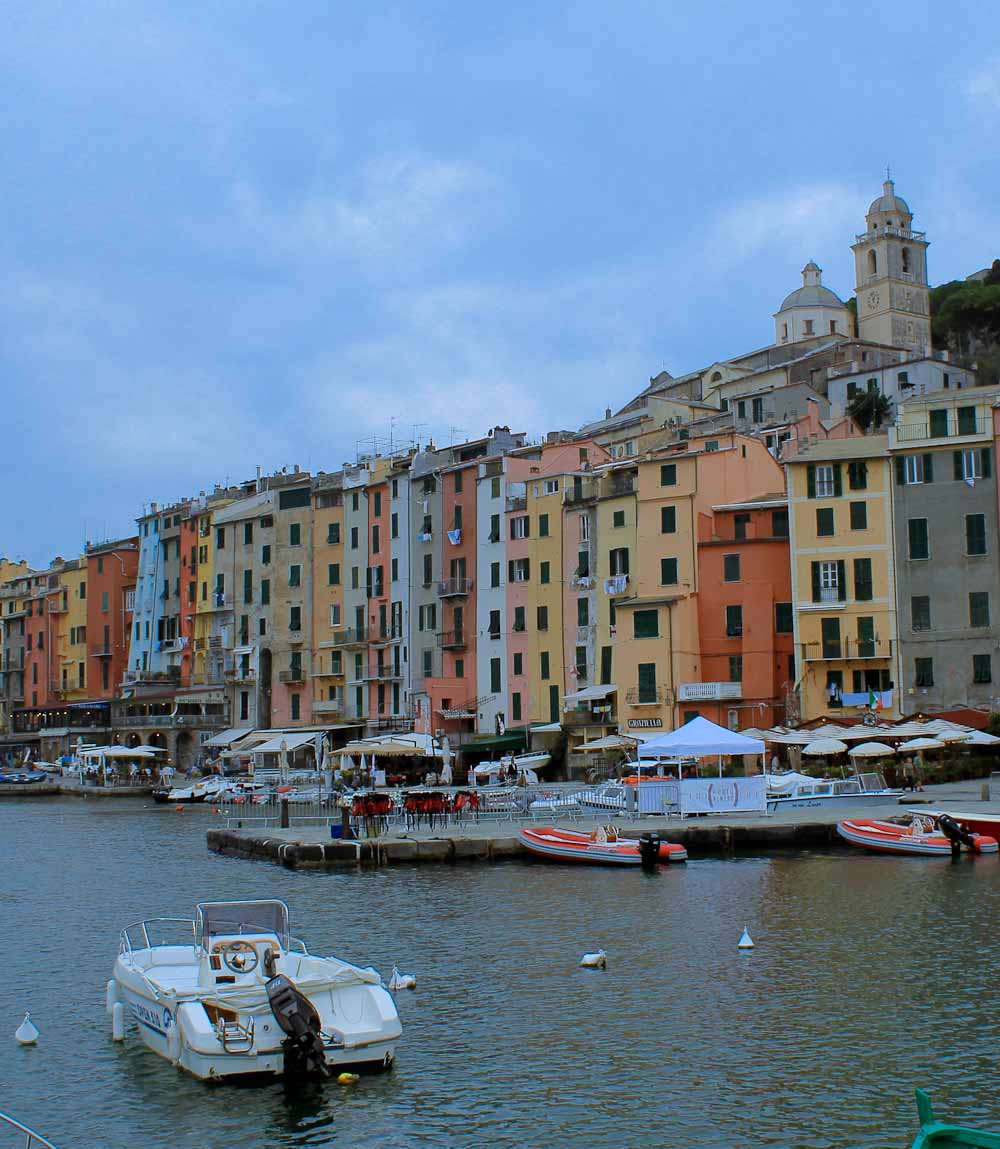 Porto Venere’s most photographed and striking feature are the densely packed towers lined up at the harbour front as a defensive wall around the city. These seven and eight-storey palazzata a mare have been built into the rock with internal staircases connecting the seafront with the higher main street at the back. It is interesting to observe, how the red, orange, yellow, blue and salmon coloured houses have no balconies, tiny windows and no alleys – apart from the internal stairways – providing access to via Capellini at the back.

According to Porto Venere Pro Loco, the idea of constructing houses with a double function as habitation and fortification stems from the Genovese, who bought Porto Venere in 1116 AD, and went on to protect it from attacks from their rivals from Pisa. I do doubt, however, that the present case fortezza are that old. 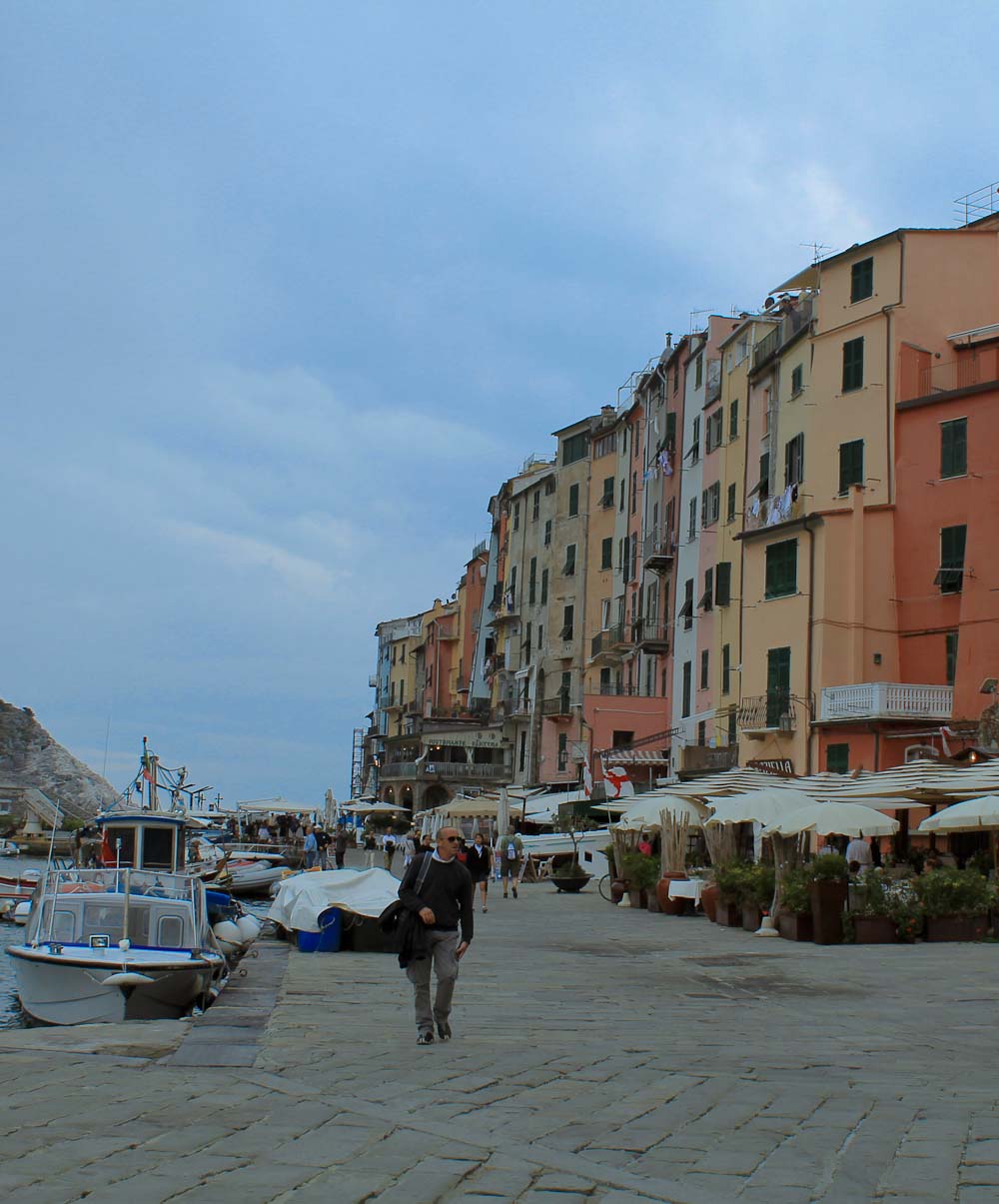 The promenade where locals and tourists mingle during the evening stroll.

In front of the palazzata there’s a marina and a lungomare seafront filled with outdoor restaurants and bars. This is where tourists, sailors and locals go to sip Aperol Spritz, enjoy a plate of seafood pasta, test new gelato flavours or fare la passegiata that is the art of strolling leisurely along the promenade in order to chill out and chat with family, friends and acquaintances.

From the promenade there are ferry services to La Spezia, Cinque Terre, Rapallo and the enchanting Palmaria island just across a narrow strait. 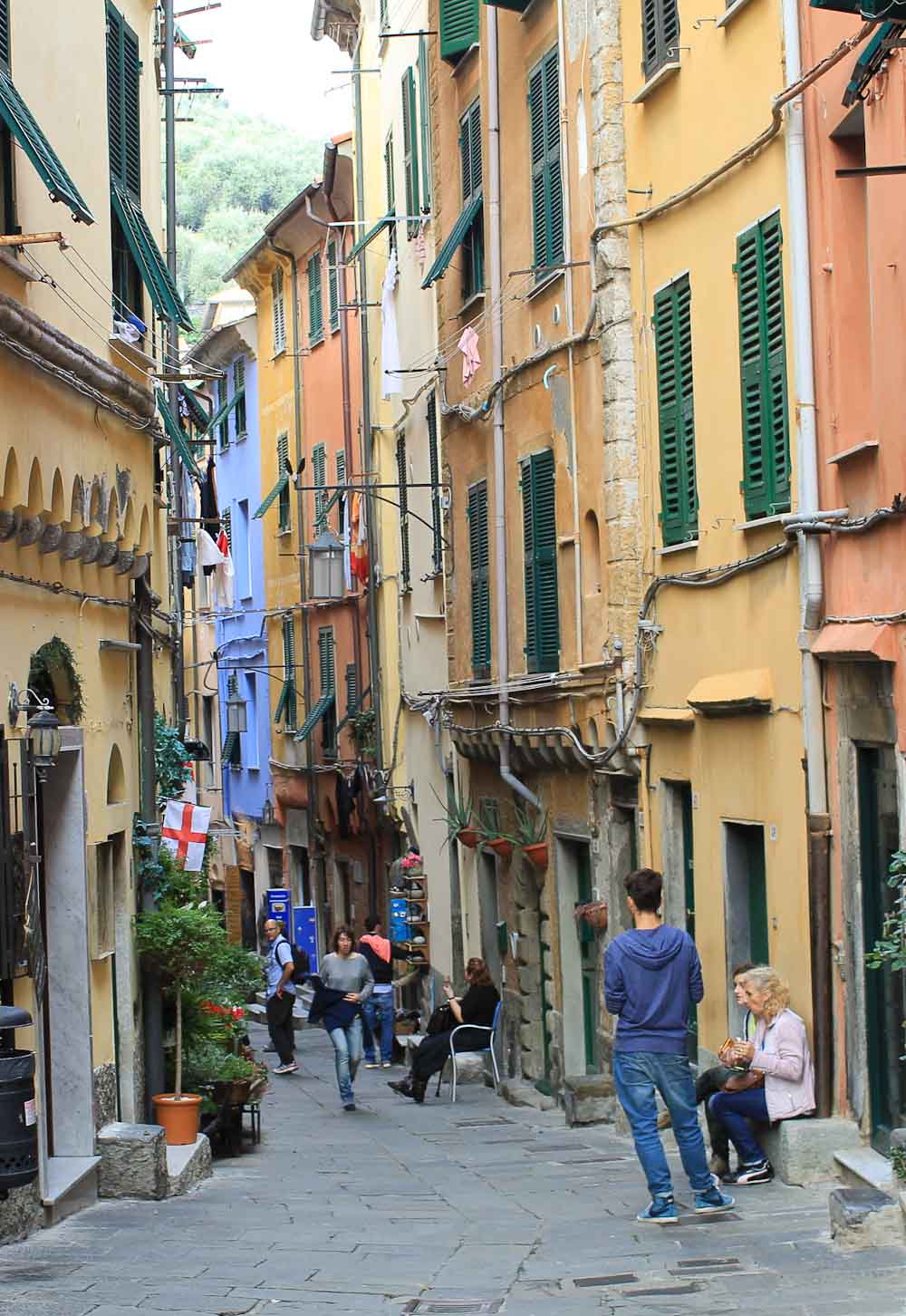 The alleys of Porto Venere are generally too narrow to accommodate motorized traffic.

Behind the fortified houses on the seafront you’ll find a Medieval tower and a city gate leading into i caruggi. In the ligurian dialect Il caruggio signifies a narrow alley, and in Porto Venere the main alley has been named via Capellini after the geologist Giovanni Capellini whose family originated in Porto Venere. As the main shopping street, via Capellini offers an assortment of souvenir shops and fast food vendors, but it is also the corridor to the other sights of Porto Venere and to smaller stairways and carrugi leading to what appears to be the residential parts of town.

Almost every house in the quiet streets has a ceramic number plate or other inventive decorations that deserve to be noticed. 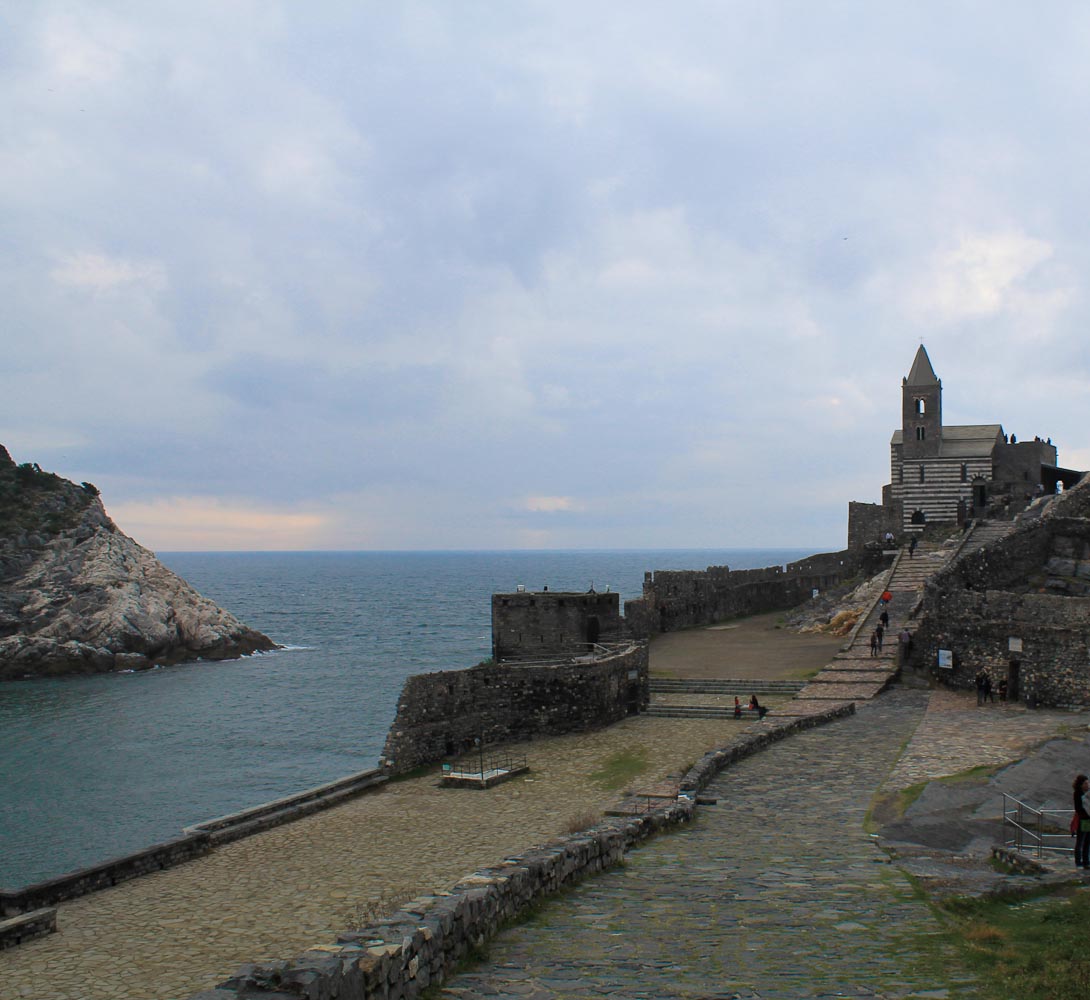 Chiesa di San Pietro is located on a cliff jutting out into the sea.

If you continue along via Capellini you will reach the tip of the peninsula, where the ancient Romans raised a temple to Venus, hence the toponym Potus Veneris. The Genovese replaced the temple with one of their characteristic striped Gothic churches, but some of the Roman remains are still visible to the right of the entrance.

The church is located on a cliff almost totally surrounded by water, and on a clear day it provides a perfect vantage point for views of the Cinque Terre coastline and the Palmaria island.

I you happen to be in Liguria on August 17th, make sure not to miss the Festa della Madonna Bianca in Porto Venere, when the whole town and in particular the cliff around Chiesa di San Pietro is illuminated by Roman torches. The religious festival links to a miracle that occurred in 1399, when a blackened image of the Holy Virgin resumed shape and colour due to intense praying. The sacred painting is said to have reached the shores of Porto Venere encased in a sealed trunk of Lebanese cedar tree in the year 1204. 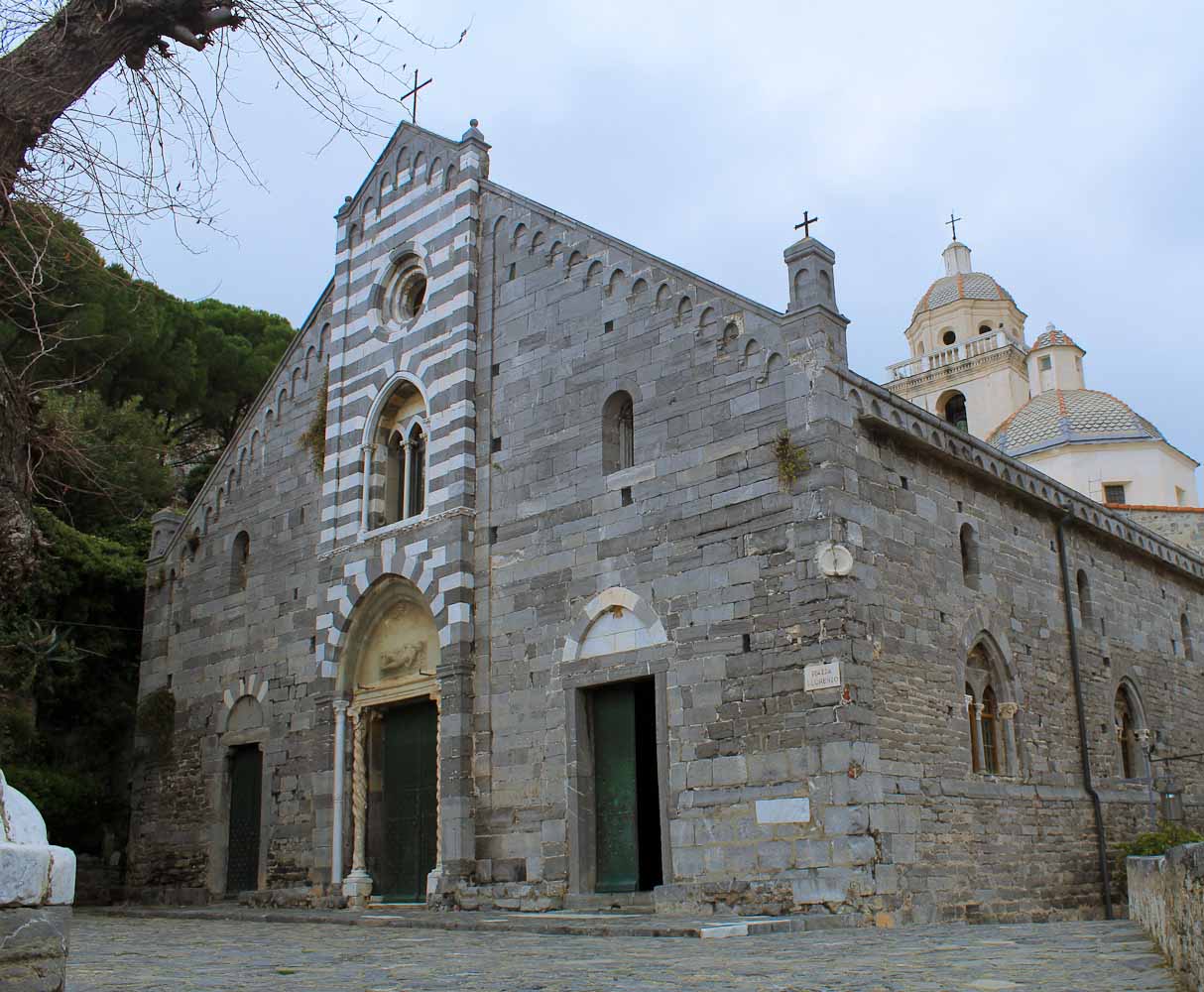 Chiese di San Lorenzo with the patron saint lying on a grill above the door.

The miraculous painting of the Madonna Bianca with pronounced golden crown and a very mature looking Chist on her lap can be seen in the other church built by the Genovese just after they purchased the town in 1116 along with the trunk in which the painting arrived. Apart from the painting the thing that captivated me most about the San Lorenzo church was the array of diverse stones and building materials that make up the facade.

Above the main entrance there is a relief of a man on a grill in memory of the martyrdom of Saint Lawrence. Legend has it that he was roasted on a gridiron as punishment for distributing alms to the poor. After having suffered pain for a long time, the martyr declared that he was well done on one side and requested to be turned over. In consequence, he became the patron saint of cooks, chefs and comedians among others. 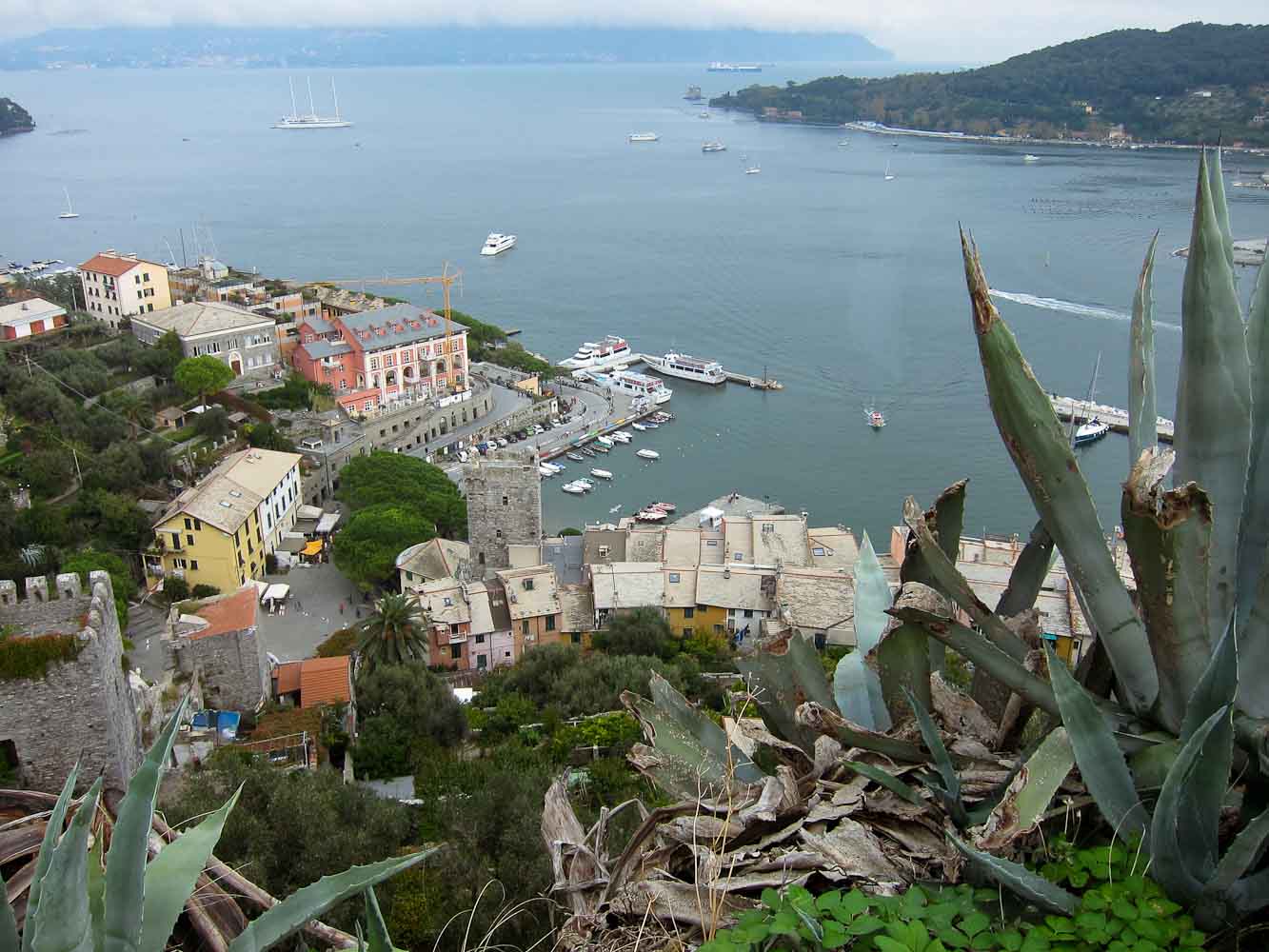 One of many spectacular views from Castello Doria, high above Porto Venere. Here you see the Palmaria island and in the distance the other side of the Gulf of Poets.

Continue to walk up to the highest point in Porto Venere and you’ll reach the muscular Castello Doria. The precise origin of the structure is unknown, but it served as a stronghold for the Republic of Genova from the 12th to the 16th century, and it was used as a prison during the Napoleonic era.

Towards the sea the pentagonal castle is an impenetrable wall of bricks with only one point of access which crossed a no longer existent drawbridge. The castle is open to the public and it is worth paying the admission fee for the spectacular views alone. Although there is not a lot to see inside the castle, you are free to roam the grounds and battlements with incredible panoramas of Porto Venere and the Gulf of Poets. You can also explore the remains of two windmills that were used to grind flour in the 16th century. Today, it takes a good imagination and a knowledge of their past to see the purpose of these roofless, cylindrical structures. 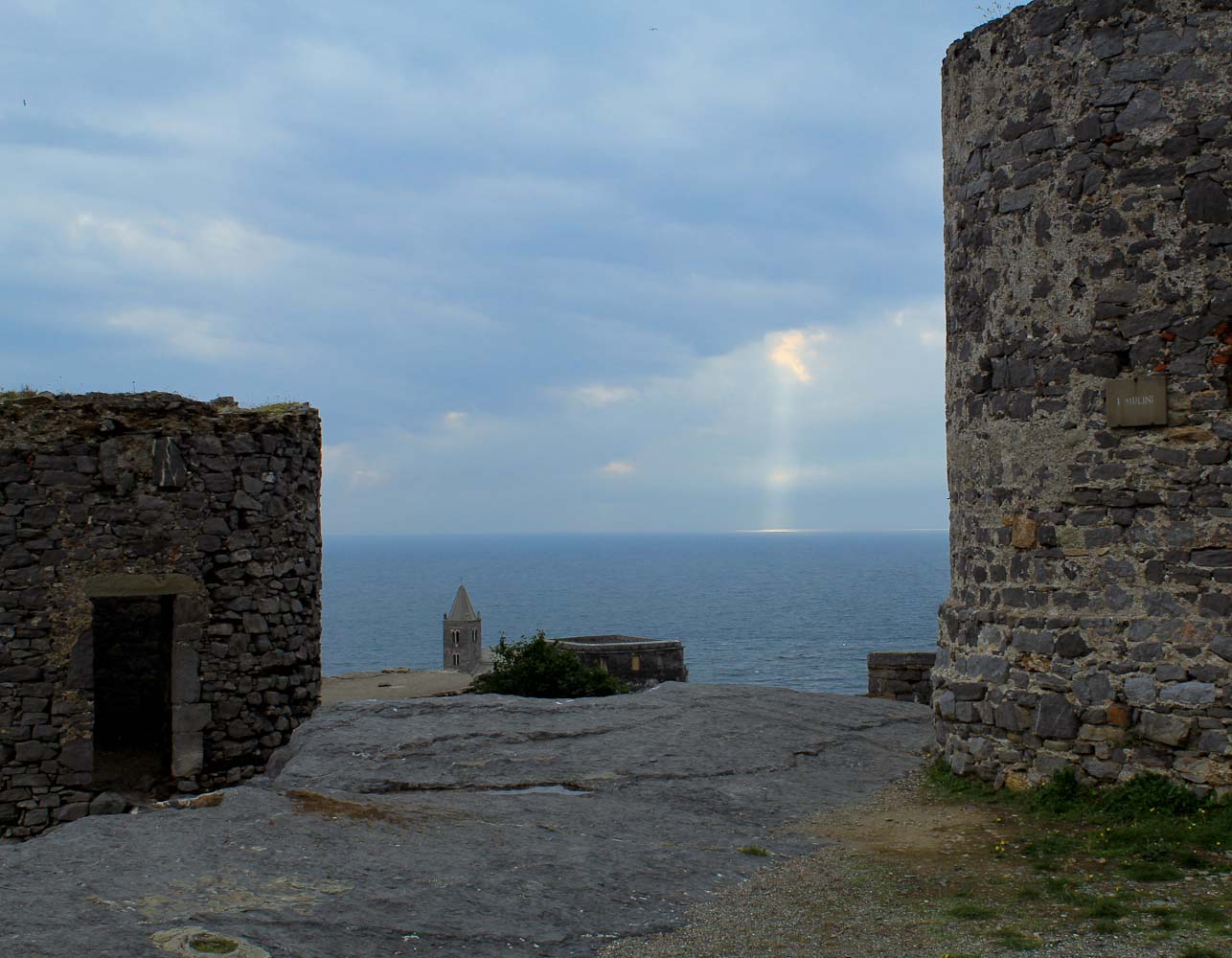 The remains of two Medieval windmills.

No visit to Porto Venere is complete without a stop at Grotta Arpaia. Above the entrance to the stairs leading down to this rocky precipice, there is a voluptuous bronze sculpture called ‘Mother Earth’ by Scorzelli and a plaque saying that ‘This grotto was the inspiration of Lord Byron. It records the immortal poets who as a daring swimmer defied the waves of the sea from Portovenere to Lerici.” The distance between the two towns on either side of the Gold of Poets is 7.5 km, so the swim across the bay to see his friend Shelley was quite an accomplishment.

Byron spent a short time in Porto venere in 1822, and some claim his stay here inspired him to write the famous one hundred-and-seventy-eighth verse of his epic poem that reads like a 200 year old travelogue written in Spenserian stanza:

There is a pleasure in the pathless woods,
There is a rapture on the lonely shore,
There is society, where none intrudes,
By the deep sea, and music in its roar.
I love not Man the less, but Nature more,
From these our interviews, in which I steal
From all I may be, or have been before,
To mingle with the Universe, and feel
What I can ne’er express, yet cannot all conceal.

Even today Byron’s cavern is a suggestive spot, where you might experience a certain kind of romantic melancholia, even if the number of visitors spoil the peace and solitude, but it would be nice to bring along a copy of “Childe Harold’s Pilgrimage” and read Canto IV on Italy, while sitting on these black grey cliffs looking out over the Ligurian coast.

A storm gathered over the Ligurian coast adding drama to the views from Byron’s cavern.

Oyster mushroom bruschette with garlic and peperoncini
Scroll to top