Visit Pordenone to experience the charming ordinariness of an authentic Italian city. Here are 5 highlights of one of three provincial capitals in Friuli-Venezia Giulia.


I was probably a little disappointed with my first impression of Pordenone. Knowing the neighbouring cities of Udine, Bassano and Treviso, I had expected more narrow streets, cascading flowers and elegantly symmetrical columns and pilasters.Instead I found myself surrounded by two-toned functionalism and a satellite suburbia feeling from the moment we left the vintage decor of Hotel Italia.

From this point of view, Pordenone is the perfect antidote to Venice, 90 km further to the southeast. A place, where children are sent to school in white collared grembiule frocks every morning, families shop in the local Eurospin, and pensioners stroll arm in arm to their favourite cafe. For the outsider it’s quite boring. There are no UNESCO World Heritage sites around here, no major museums, outrageously priced restaurants or unmissable sights. Some might try to present Corso Vittorio Emanuele II as a “water-less Grand Canal”, but the idea is misleading. And there is nothing refined and canal-ish about the Noncello river.

Pordenone is a perfectly ordinary north Italian city. It lives a quiet life that does not attract great masses of tourists. If you do stop by, regardless, here are a few suggestions of what to do or what I found to be the highlights of our visit. 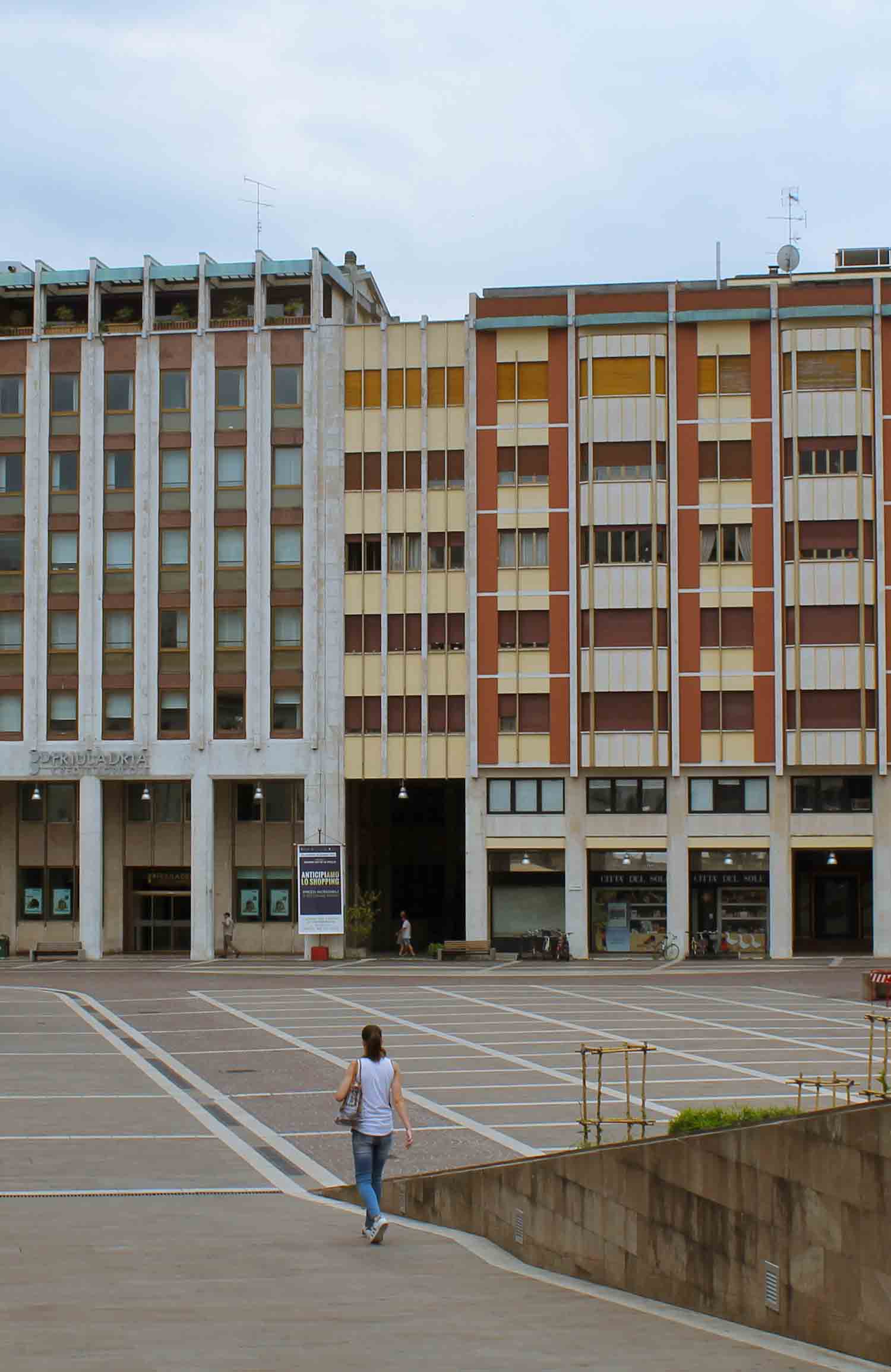 The architecture around Piazza XX Settembre is chilling but effective as a historical marker of a new beginning.

We cold started our exploration of Pordenone on Piazza XX Settembre in what is best described as a chilling urban desert. The few people present in this huge central square, scurried along the the edges of monumental buildings with no colours or ornaments to mitigate their severe dominance. Apart from the EUR in Rome, I don’t recall a more coherent expression of architectural rationalism, and a starker contrast to the beauty of La Piazza in Venice.

In Italy, the rationalist movement of the 1920s and 1930s wanted to create space defined by the materials and the purpose of the structure. They believed that the challenges of the real world could only be solved by logic and reason, leaving no room for vain and superfluous decorations.

The architect behind Piazza XX Settembre in Pordenone was Cesare Scoccimarro, who at a young age had become creative director of the Fantoni Group. In Pordenone, he was given several assignments, including the Casa del Mutilato from 1937, which is strangely bombastic in spite of a relatively small footprint. The name of the building and the Virgil quote on the architrave spells war memorial. This is the house of the invalid veterans of the first World War, who followed wherever fate led them ‘Quo fata trahunt retrahuntque sequamur’.

As such Piazza XX Settembre tells the story of a new beginning in Pordenone after the sacrifices made by a generation on the battlefields. It’s the belief in order and simplicity, that follows a period marked by total chaos. Yet the hopeful and optimistic note is drowned by the intimidating proportions and signs of power that ensured the support of the PNF and signalled the strength of the state to the population and potential invaders from the north east.

This explains the freezing atmosphere. I left Piazza XX Settembre with an impression of the consequences the people of Pordenone had suffered for being in the front line of European politics. 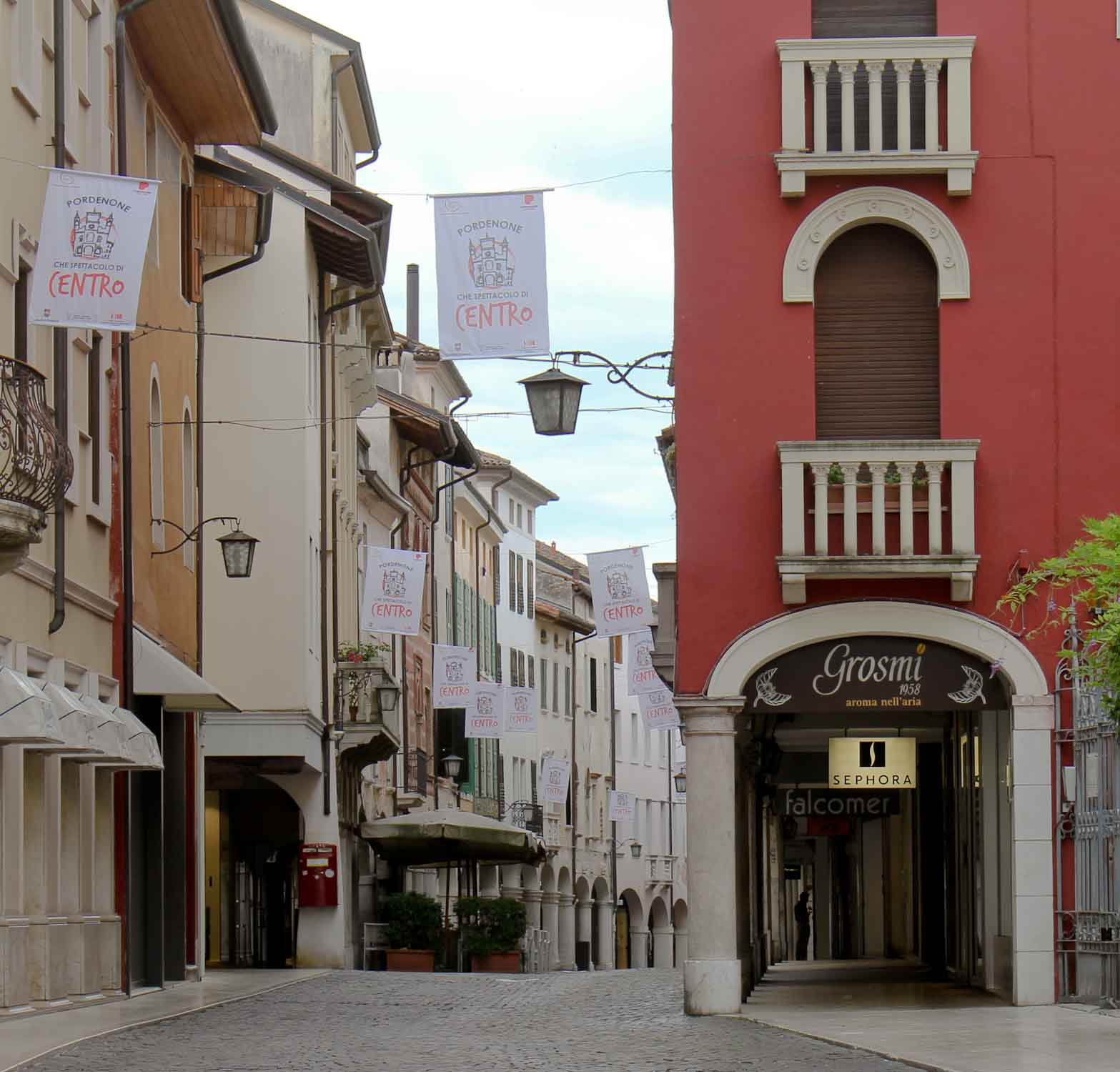 Corso Vittorio Emanuele in Pordenone is not a waterless Grand Canal, but a charming Medieval main street.

Our spirits lifted considerably after turning a few corners. Corso Vittorio Emanuele II in Pordenone may not be a waterless Grand Canal, but it’s a porticoed beauty lined with richly decorated palaces, where you’ll find all the Medieval creativity and folly missing on the urban scene between the wars.

I found reminiscences of Arezzo in the exterior wall papers, saw traces of Anagni in the earth toned colour schemes and heard echoes of Bolzano in gateways leading into the dense and hidden Medieval heart of the city. Apart from frescoes in intricate patterns and subtle colours, Corso Vittorio Emanuele II led to the discovery of great shops, classy outdoor cafes and serious restaurants. If you are planning a night out in Pordenone, this is the place to go.

On Pordenone city council’s homepage there’s a brilliant description of the historic houses, where you can read where Napoleon slept, when he visited Pordenone in 1797, and find explanations for the symbols and scenes depicted on various facades. 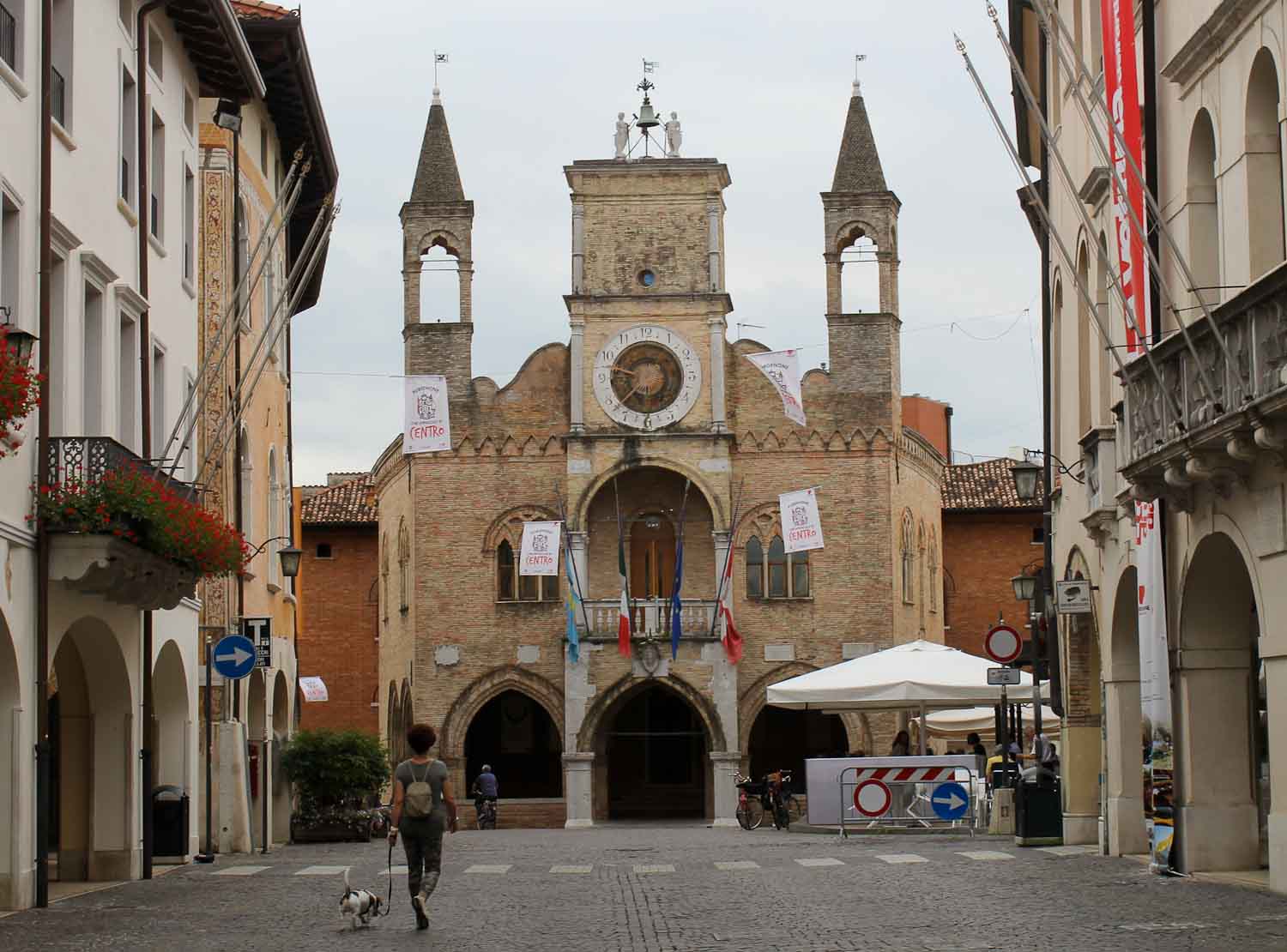 The Medieval town hall calls for a selfie stick.

As we approached the river Noncello, the main street was blocked by the quaint, old Town Hall that floated like an island in the middle of the road. The trapeze shaped building dates back to the 13th and 14th centuries and it displays several Gothic traits with pointed arches, three towers and the double loggia of a ground floor veranda beneath a stately balcony.

The astronomical clock that apart from keeping track of the time displays the location of the moon and the sun in the sky was added later, along with the two stone figures who strike the hour on a brass bell.

I liked the obstructive nature of this building and started to envisage witchcraft, armoured knights, distressed damsels and the romantic cavalry. If I’d had a selfie-stick, this would be where I’d try to use it. The romance was a construction though, for in reality the Medieval setting should denote deprivation and death, as Pordenone suffered continuous outbreaks of plague and cholera that halved the population several times over during that particular period in history. 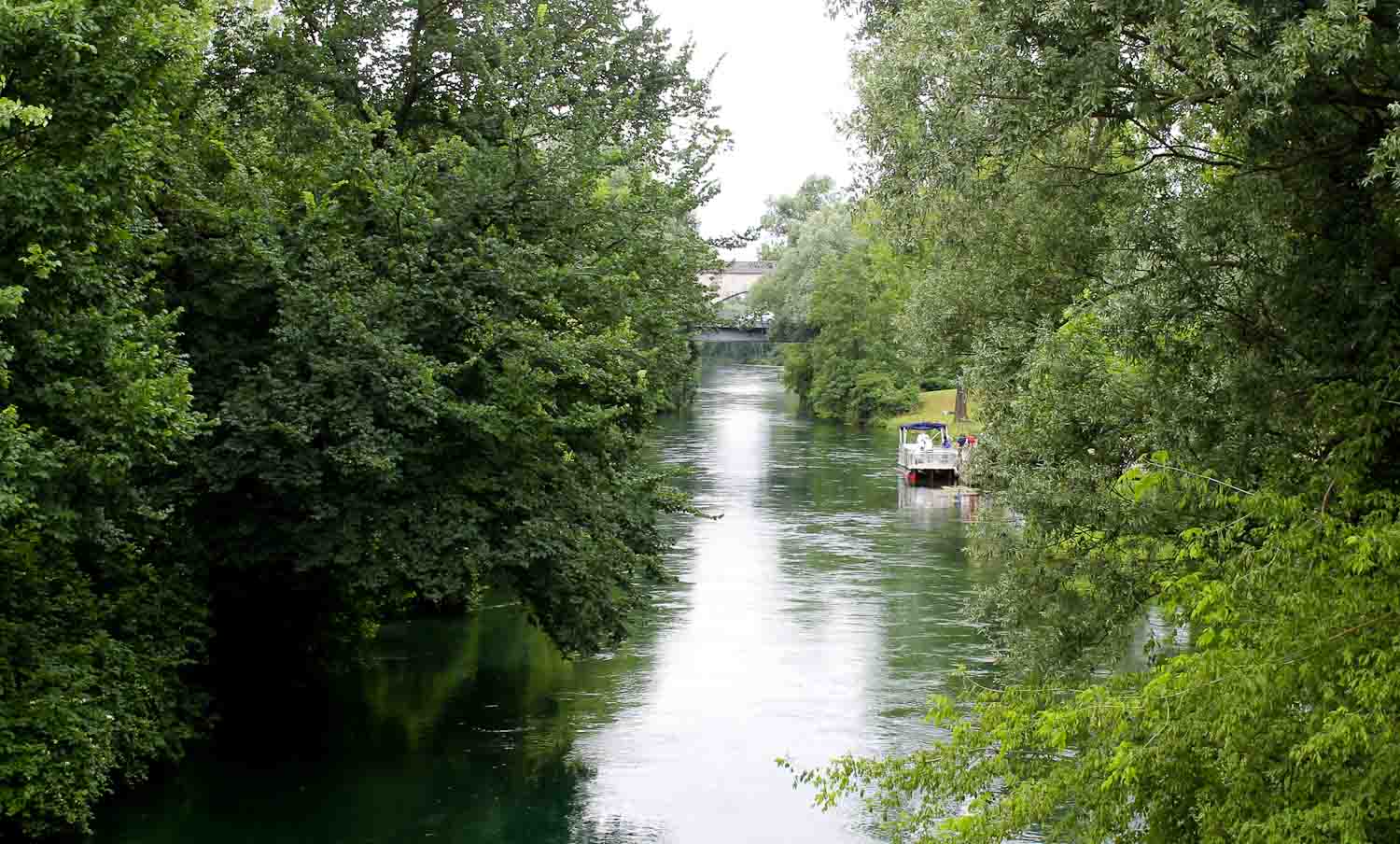 In the summer there are free excursions on the Noncello, or you can explore the river from a rented canoe.

What’s in a name?

We continued past the cathedral with a surprisingly long and lean clock tower to Via della Santissima. It wasn’t until I stood on the bridge over the Noncello river that I started wondering, where the Port in Pordenone had come from.

It turns out that the name derives from the latin Portus Naonis meaning the port of the river Naone Noncello, and that the area has been inhabited since Roman times. The river was the life nerve connecting Pordenone to Venice and the Adriatic Sea, and for centuries boats ferried passengers and goods to the city.

Today, it is mostly canoes that traffic the Noncello. A narrow waterway overgrown with trees and bushes. In summer a tour boat offers free boating excursions for those who have booked tickets beforehand.

Unfortunately, we were not aware of this offer, so instead we explored the Riviera del Pordenone. It was a warm summer night, when Italy played Germany in the UEFA EURO quarter finals and there were big screens and football fans everywhere. We all cheered loudly every time Italy scored in the penalty shoot-out. Yet there was no animosity or trouble, when Germany won. People just sighed and went home. The next morning the Riviera had been taken over by a food festival offering a variety of corncobs, strudel, waffles, sfogliatine, spices, flowers, honey, donkey milk and other local produce.

This day at least, the banks of the Noncello river lived up to its former importance as a commercial centre.

During our visit to Pordenone, we stayed at the Albergo Residence Italia that turned out to be a sight on its own. The bleak exterior and nondescript rooms left no impression on me what so ever, but I’ll never forget the circular bar-slash-breakfast room with low red leather or plastic chairs, blue carpet and wall fittings and a hideous plastic and steel lamp.

It was like having breakfast in an action film set from the 1970s. A windowless room designed for a life of drink, women and gambling. I half expected to see a retired Roger Moore or Tony Curtis from The Persuaders enter the scene, but nothing happened and the only explanation I received from the friendly woman in the reception was a smile and a shrug and the epitaph ‘vintage’. This pretty much sums up our first visit to Pordenone.