Unesco World Heritage lists Crespi d’Adda as an ‘outstanding example of the 19th- and early 20th-century ‘company towns’. And the quiet, ordinary town of ordinary lives in the early 20th century is not an ordinary tourist site.

We had gone out of our way to visit this ‘remarkably intact’ shrine for industrial history, and were more than a little disappointed to find the place half dead and deserted. Company owners caring for their employers by providing housing, shops, doctors and child care is obviously a thing of the past.

Factory sheds with fake doors and the star-shaped ornament that is repeated over and over again throughout the town.

The construction of a welfare village

Today there are locks on the gate to the cotton mill and a high wall surrounds the castle-like mansion where Cristoforo Benigno Crespi resided with his family, but you can still walk around the neat streets and admire the well-kept houses and the fenced-in lawns that look so utterly out-of-place English on Italian ground. An industrial utopia realised on 1 km2 along the banks of the river Adda.

Main gate to the textile factory in Crespi d’Adda

The cotton mill was established in 1875 shortly after the Risorgimento had turned Italy into a unified market, and as the factory was 4 km from the nearest village Cristoforo Benigno Crespi built three-storey multi-family houses for his workers. In 1889 his son Silvio took over the management of the mill. Silvio had been to England and was inspired by English middle-class housing and the ideals of industrial paternalism, and soon the workers could move into regular rows of almost identical detached and semi-detached houses with a small garden and vegetable plot. Crespi d’Adda was the first town in Italy to have electric lightning, there were public lavatories and wash-houses, a medical clinic, a consumer cooperative, free kindergarten, school, church, theatre and a sports centre. The employer provided everything to give the up to 3.200 workers at the mill a good and harmonious life. And for 50 years there were no strikes or social disorder around the mill.

Identical houses for the factory workers with fenced in gardens.

From cradle to grave

The Crespi family was forced to sell the entire town during the Great Depression in 1929, but the company town lived on with new owners until the factory closed down in 2003. And in 1995 in was included on the list of Unesco World Heritage in Lombardy.

We walked up and down the three parallel roads looking at seemingly inhabited houses without meeting anyone apart from a couple of New Hampshire chicken. Tried the cooperative shop to find a guided tour or a leaflet offering background information. And gazed at the gentrified villas, where company executive had their homes. After about half an hour we thought we had seen it all, and ended up doing the cradle to grave walk along the main street, where there is a church at one end and a cemetery at the other.

Like the rest of Crespi d’Adda, the cemetery is very anglicized though guarded by a pompous oriental pyramid mausoleum, where descendants of the Crespi family are buried. Here among the cross shaped headstones planted in the lawn for workers and their children, we finally met a man who had lived and worked in Crespi d’Adda 40 years until the factory closed down. He was more than a little nostalgic, proud of the quality of the denim produced at the mill and very grateful to his former employers for all the free welfare services provided. In between the stories of his life, he kept repeating that Crespi d’Adda had been an absolutely wonderful place to live and work. And I’m sure he meant it.

The anglicized cemetery with a sinister Art Nouveau mausoleum.

Other sights and sites of Unesco World Heritage in Lombardy 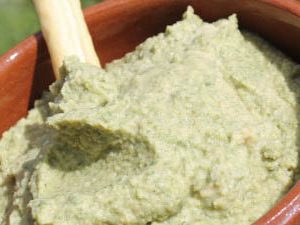 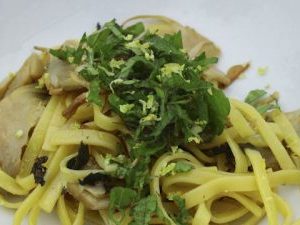 Pasta with artichokes
Scroll to top