Right in the Centre of Basilicata

Tricarico in the Matera province of Basilicata is an old city with a decreasing population and a strong sense of self.

“Did you know that Tricarico is right in the centre of Basilicata. There’s exactly 80 km to the Tyrrhnian coast by Maratea, to the Adriatic coast at Molfetta and to the Ionian coast at Metaponto. We are the natural, geographical regional hub.”

We are being lectured on local history by a carpenter with intelligent eyes in a weather worn face, who wants us to admire the wooden cabin, he has helped to raise in preparation for the annual feast of Our Lady of Mount Carmel. It’s the 16th July and Tricarico is buzzing with activity. The nutman selling peanuts, walnuts, hazelnuts, almonds and lupini beans has already set up shop along the road leading up to Piazza Garibaldi, where construction workers are building a stage for the major’s speech later in the day, after a Madonna statue has been dragged through town by a pair of oxen. The wooden cabin – so extraordinary on these latitudes – will serve as a beer hut, perhaps redeemed by a belief in the Sabbatine Privilege according to which the Madonna della Carmine will save sinners from purgatory as long as they wear the Brown Scapular, and commend devotion to the saint especially on Saturdays, which are dedicated to her.

Tricarico was founded as a bulwark against the imperialism of the Greek hero Diomedes.

The myth of origin

The apparent contradiction between alcohol and a feast for a catholic saint is not a topic that occupies our new found friend. He is far too eager to share his knowledge of and passion for the city and the area that surrounds it, now that he has finally found an audience of two ignorant foreigners. Apart from being the centre of Basilicata – or Lucania as locals prefer to call the region – Tricarico has a rich history going back to the era of the Greek hero Diomedes, who founded Vasto, Manfredonia and Venafro.

According to mythology, Diomedes returned to his native city after the conquest of Troy, but to avenge a wound suffered during the war the goddess Aphrodite had cast a spell over him, which meant that neither his wife nor his subjects recognized the homecoming king. For this reason, Diomedes decided to leave the city with his men embarking for Italy in search of new lands. He first came to the Tremity Islands and then drove along the Adriatic coast establishing Greek colonies and founding cities. He arrived in Puglia with a large army, married the daughter of King Dauno and gained half the kingdom, but that did not satisfy his ambition. Diomedes began to harass the neighbours and take possession of their territories and cities, including the ancient cities of Trica and Argo. Both were destroyed, but the survivors, who escaped from the slaughter, moved to safer places by founding a new city which they gave the Greek name Tricargos meaning ‘three mountains’, later latinized to Tricaricum. 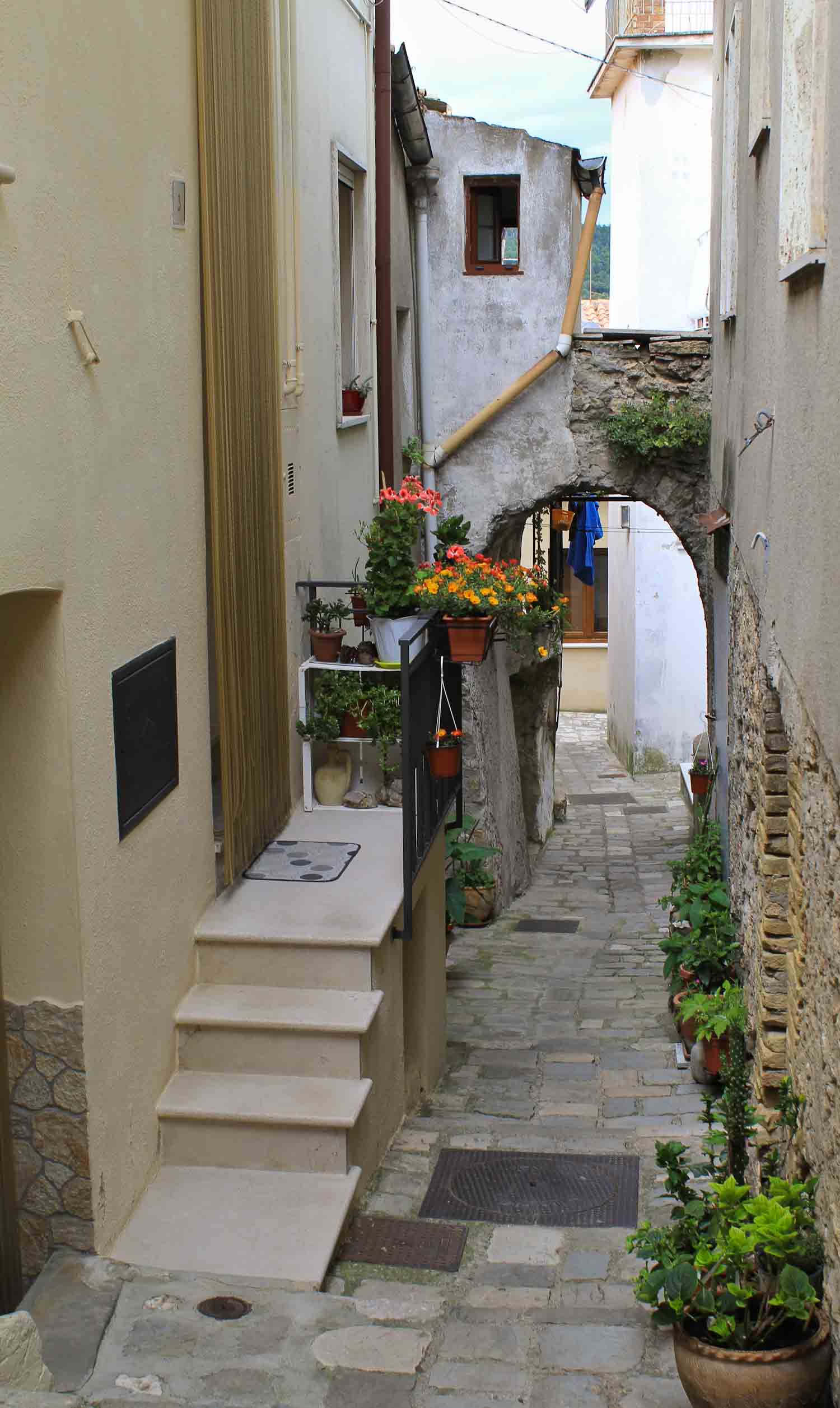 Flower pots on the door step indicate that people are still living in the Medieval centre of Tricarico.

Flowers on the doorstep

While the man has told his his tale with lots of digressions, it has started to drizzle, and the mist and heavy grey skies obscures the panoramic view that normally allows you – we are assured – to see all the way to Taranto – with binoculars in clear weather.

Fortunately, we have already visited the old part of Tricarico, where stone slabs pave streets so narrow you have to step into a doorway to let a three-wheeled Api pass. Most of the houses are derelict or in a sad state of disrepair with crumbling plaster, boarded up windows, helter skelter roof tiles and visible cracks, yet I heard the sound of a play station coming from one of the living rooms, the smell of detergent and home cooking emanated from some kitchens, there were voices and children playing in the streets, and potted flowers on the front steps indicated that people are still living in what remains of the Medieval version of Tricarico, despite the lack of modern conveniences and a decrease of 40 percent in population over the last 60 years. 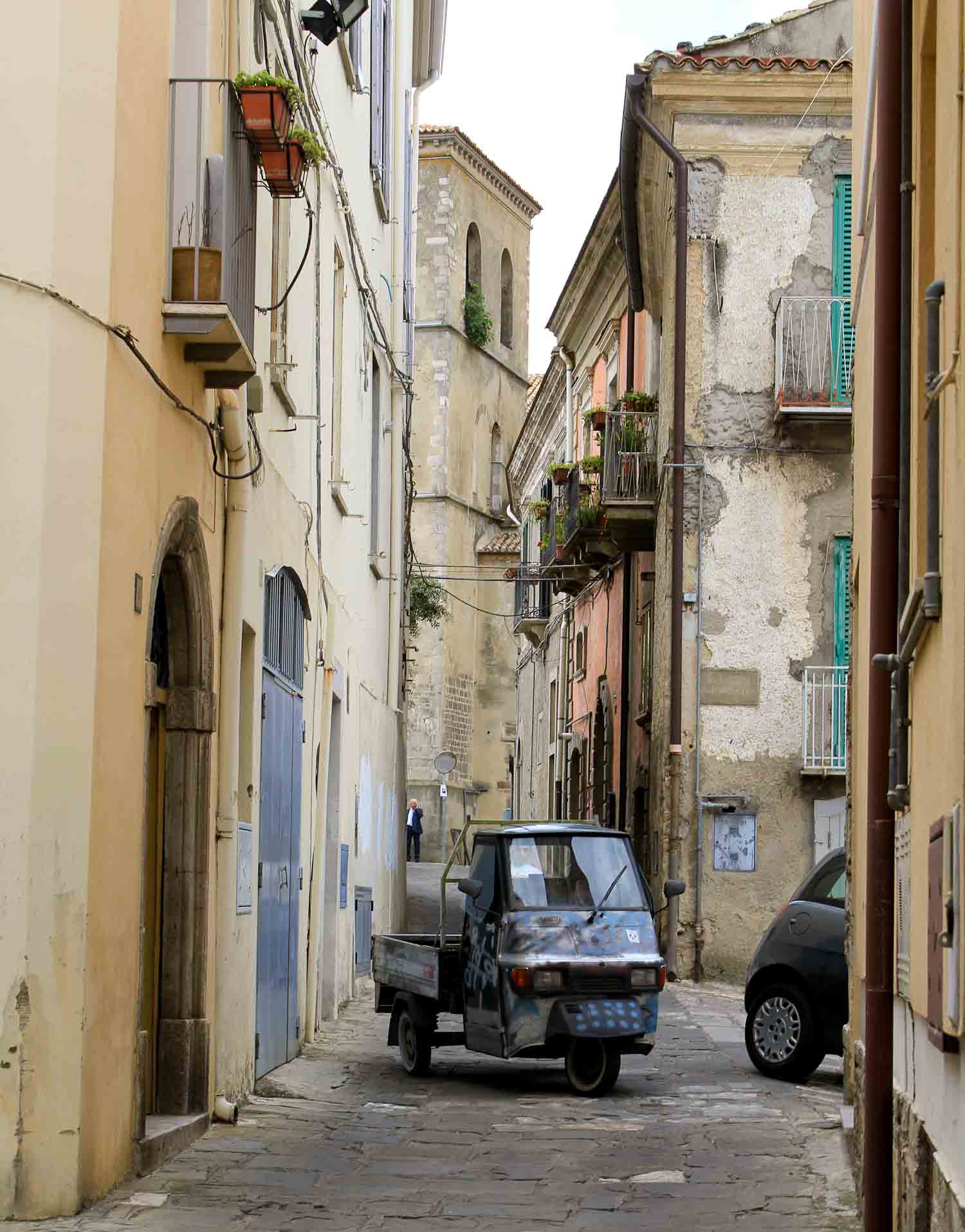 The large Medieval part of Tricarico is in a sad state of disrepair, but the centre still holds.

As the drizzle turns to rain, we shake hands with the carpenter, but before we leave he points to the raptors hovering over the open land and offers another fascinating bit of trivia:

“You know, you can always distinguish eagles from falcons and kites by the shape of their wings”, he says. “Eagles have large rectangular wingspans, the wings of a kite are triangular, while the falcon looks pointed like an arrow head. That’s common knowledge in Tricarico.”

On the way down from Tricarico, I try to employ my new ornithological insight, but at this precise moment there are no birds of pray in the sky. Instead I come to think of the first verse in William Butler Yeats’ poem ‘The Second Coming’, which reads:

Turning and turning in the widening gyre
The falcon cannot hear the falconer;
Things fall apart; the centre cannot hold;
Mere anarchy is loosed upon the world,
The blood-dimmed tide is loosed, and everywhere
The ceremony of innocence is drowned;
The best lack all conviction, while the worst
Are full of passionate intensity

Luckily the centre that is Tricarico still holds, thanks to people like the wise and friendly carpenter and a large, lively nucleus of ancient houses.