Tribute to Modugno
and the Greatest Italian Pop Hit Ever

Many historic buildings in Italy are used for local exhibitions of varying quality. In Taranto, the castle housed a homemade tribute to Modugno and ‘Volare’ – the greatest Italian pop hit ever.

– Please enter. The exhibition is open and there is free access, says an elegant lady, using her shoulders and weight to open the heavy, old door to the Spanish castello. With a surplus of ancient defence buildings and very little gunfire, many city councils transform historic knights’ castles to modern cultural centres, presenting exhibitions of a highly versatile nature and quality.

Anything goes in a tribute to Modugno.

The present exhibition takes up two rooms and includes a series of happy amateur, naive paintings, some collages, a guitar and some black and white photographs. There does not seem to be a specific theme to the paintings, although a preference for Magritte’s flying men and the characteristic Greek blue colour can be traced. The photographs depict a man in a white suit with top hat and walking stick on a white staircase illuminated by a single street lamp. They communicate an atmosphere of “clown-crying-when-audience-has-gone”, but I still have no idea about the theme of the exhibition. It does not dawn on me, until I see the collages.

The collages resemble the result of a theme week in fourth grade. There are some clippings from old photo magazines, a vinyl record and notes to the greatest Italian pop hit ever, the song ‘Nel blu dipinto di blu’ better known as ‘Volare’. The exhibition turns out to be a tribute to Modugno, the singer who won the San Remo Festival in 1958 and 1959 with his southern Italian accent; American-inspired swing rhythms and Elvis hip wriggle. He first topped the charts with the story of a man who dreams he flies out of the blue painted blue, and a year later entered the contest with a rainy day, cry face song called ‘Ciao, ciao bambina’.

Photographs from the Tribute to Modugno exhibition.

The 50th Anniversary of a Song

This year marks a Domenico Modugno’s 50th anniversary, which is why the Circolo Culturale in Taranto, has invited 42 artists, some of them from Modugno’s hometown Polignano, and a handful of professore and professoressas to contribute to the exhibition.

Modugno, who died in 1994, is still a local hero in southern Italy, despite the fact that he moved to Torino at the age of 19 and later settled in Rome. In tribute Polignano a Mare (BA) were Modugno was born has just unveiled a bronze sculpture of Modugno with outstretched Jesus arms, and the town of San Pietro Vernotico (BR), where Modugno had his childhood and youth, will probably do something similar. At the same time Modugno pops up regularly in small, semi-private exhibitions in council offices, cafes and castles.

The Castelli, that throughout history have resisted one enemy attack after the other, have now succumbed to a simple but extremely catching pop song. 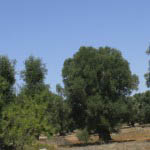 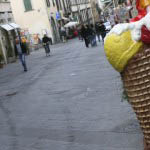 The best ice cream in Italy
Scroll to top