Tracing Fellini through Rimini: A word made up of straight lines like marching soldiers caught between towering mountains and the dark open void of the sea.

Rimini signifies holidays and beach parties for most people, but the city with 141 000 inhabitants on the Adriatic coast is also the hometown of Italy’s celebrated film maker Federico Fellini and the place that sparked his imagination. In ‘La mia Rimini’ Fellini guides us through Rimini, as he experienced it from 1920 until he moved to Rome in 1939, but the magic atmosphere prevails.

On a foggy day outside the tourist season, my impression of Rimini confirms Fellini’s perception of an unreal city. A place and a word made up of straight lines like marching soldiers caught between towering mountains and the dark open void of the sea, where the inhabitants are forever caught between arrogance and blasphemy in a strange mix of superstition and belief in God.

Fellini was born in via Fumagalli, in a house he does not remember himself and on a road I fail to identify on the map. The guided tour therefore starts at the station (A) and goes down to the olive tree in Piazzetta Plebiscito (B), which I suppose to be near the house where Fellini grew up. He recalls an episode from the garden, where he suddenly caught sight of two actors practicing their lines in a murder mystery, only to interrupt rehearsals with a commonplace question about whether there were figs on the fig tree. The boy didn’t know, but later he came to see the event as a sign of predestination.

Scary women
Close to Piazzetta Plebiscito we find Via Clementini, where Fellini observed his first love from a distance. A young well-developed girl with full breasts, who would sometimes come and stand by the window.

From here we might head north along Via Guglielmo Oberdan, until we reach Via Clodia (G) by the river, where there was allegedly a house full of prostitutes before WW2. Fellini describes how these heavily painted and easily recognizable women with their mysterious gold-tipped cigarettes were displayed on the Corso once a fortnight.

At the nursery, Federico Fellini was surrounded by the hooded nuns of San Vicenzo, who frightened him. During a procession he had been told to guard his candle for Jesus, but when the candle blew out and the band began to play, the boy broke down in tears. Still, it was not in Rimini but in the near by town of Fano, that Fellini met unforgettable Saraghina from the film 8½.

Adolescents around the Corso
Fellini returned to Rimini for secondary school in via del tempio Malatestiano (C), which has now been turned into an art gallery and a public library. At that time, the building seemed gigantic with never ending stairs and a headmaster, who tried to literally kill students and made them learn the Iliad by heart.

The drama was enacted by the boys in the evenings, until they discovered the fun of disrupting lovers on the beach and studying the comings and goings at the chiesa dei paolotti in Via Battara (D), where munks, nuns and other frequent visitors performed mysterious rites that included the blessing of animals.

Fellini was was a skinny young man, who did not like to pose in swimming trunks at the beach, and that was a great handicap at a seaside resort like Rimini. Instead he opened a shop selling caricatures and art near the Duomo (E) and hung around bars on the Corso with artists and intellectuals. As a university town Rimini has a large student community, and Friday and Saturday nights are still an open invitation to cafécrawls and partying in the streets. And Rimini is still a town divided by the seasons.

Locked in memory
From the Corso we might just drop by Castel Sismondo (F) behind Piazza Cavour and Teatro Galli. In Fellini’s day La Rocca contained a gloomy prison with inmates shouting from the windows. Especially, when there was a travelling circus camped beneath the prison walls. Today, La Rocca is a conference and exhibition centre and the area in front of the castle transforms into a marketplace every Wednesday and Saturday.

From the castel there is a long walk along the river down to the port, the beach and the Grand Hotel (H), where Fellini stayed, whenever he returned to Rimini in later life. Here he found a fairy tale wealth and luxury that made the visits bearable. He preferred Rimini to be an imaginary place locked in memory.

And after tracing Fellini through Rimini, the town will also be stored in your memory, although I for one look forward to every new visit.

After tracing Fellini through Rimini you might want to visit

A village in Emilia Romagna 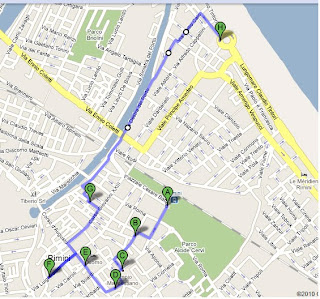