The Tombs of the Scaligers

Squeezed into a corner plot a short distance from Piazza Erbe and the mysterious whalebone in Verona, you stumble upon the Tombs of the Scaligers. One of the most outstanding and bizarre examples of Gothic and funerary art.

There are various ways to attain immortality, and Cangrande I, the founder of the Scaligeri dynasty, must have given his legacy some thought. Born in Verona in 1291 as the third son of Alberto I della Scala, he grew up to become a nobleman and warlord, but his military conquests and bravery and brutality on the battlefield, was not of the long-lived kind.

Still, Cangrande wanted to make sure that people would remember him after his death, and as he did not have wanderlust of Marco Polo, the poetic nerve of his friend Dante or the mathematical genius of Pythagoras, he decided to follow the example of the Egyptian Pharaohs and built himself an outstanding funerary monument. 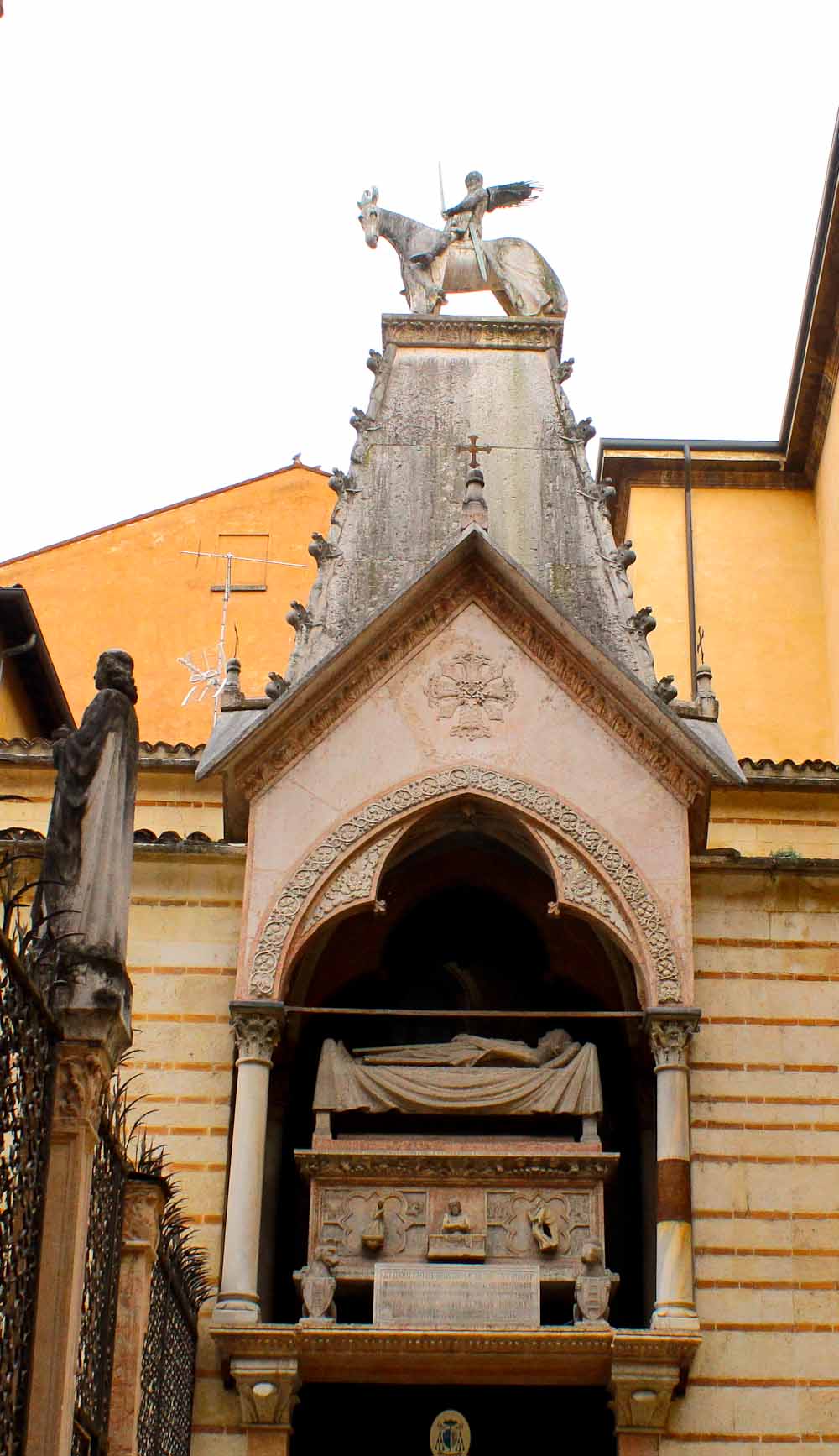 Cangrande’s tomb over the church door. The smile on his face has waned over the years.

Smiling in the Face of Death

When Cangrande died – presumably from poisoning in 1329 – his body was encased in a marble tomb placed above the entrance to the church of Santa Maria Antiqua in Verona. The tomb was topped with an equestrian statue of himself, wearing a helmet in the shape of a dog’s head and a big smile upon his face. Here was a man who stretched his easy-going, joviality to the very end.

Cangrande had no legitimate sons, so his titles passed to his nephew Mastino and Alberto. As a whole the Scaligeri were not an attractive family. They were fabulously rich, generous to those they liked, but full of distressing neuroses with propensity for fratricide.

It is said that Mastino was an odd and unstable character. Once while riding with a bishop, who was also his uncle, he suddenly drew his sword and killed the unfortunate prelate. Mastino excused himself by saying the bishop was plotting against him, but he was nevertheless filled with remorse and would never again go out without a veil covering his face. In consequence the effigy on his tomb, which is an elaborate structure cornered by four statues of the Virtues, is the only one with the visor down.

Mastino fathered 9 children including Cangrande II, Cansignorio, who also have prominent tombs in the enclosure, as well as the strong-willed Beatrice della Scala, who gave her name to the church of Santa Maria alla Scala in Milan, and by extension, the La Scala opera house which was built on the same site four hundred years later.

The Mad Dog Who Built Castelvecchio

Cangrande II was nicknamed Can Rabbioso or ‘Mad Dog’ and he ruled Verona with an iron fist. Cangrande II was so busy accumulation wealth for himself and his successors, that he impoverished the city. This made him highly unpopular and he built the Castelvecchio and a fortified bridge as a safe retreat in case of revolt. This, however, did not prevent him being assassinated by his brother Cansignorio, who succeeded him. 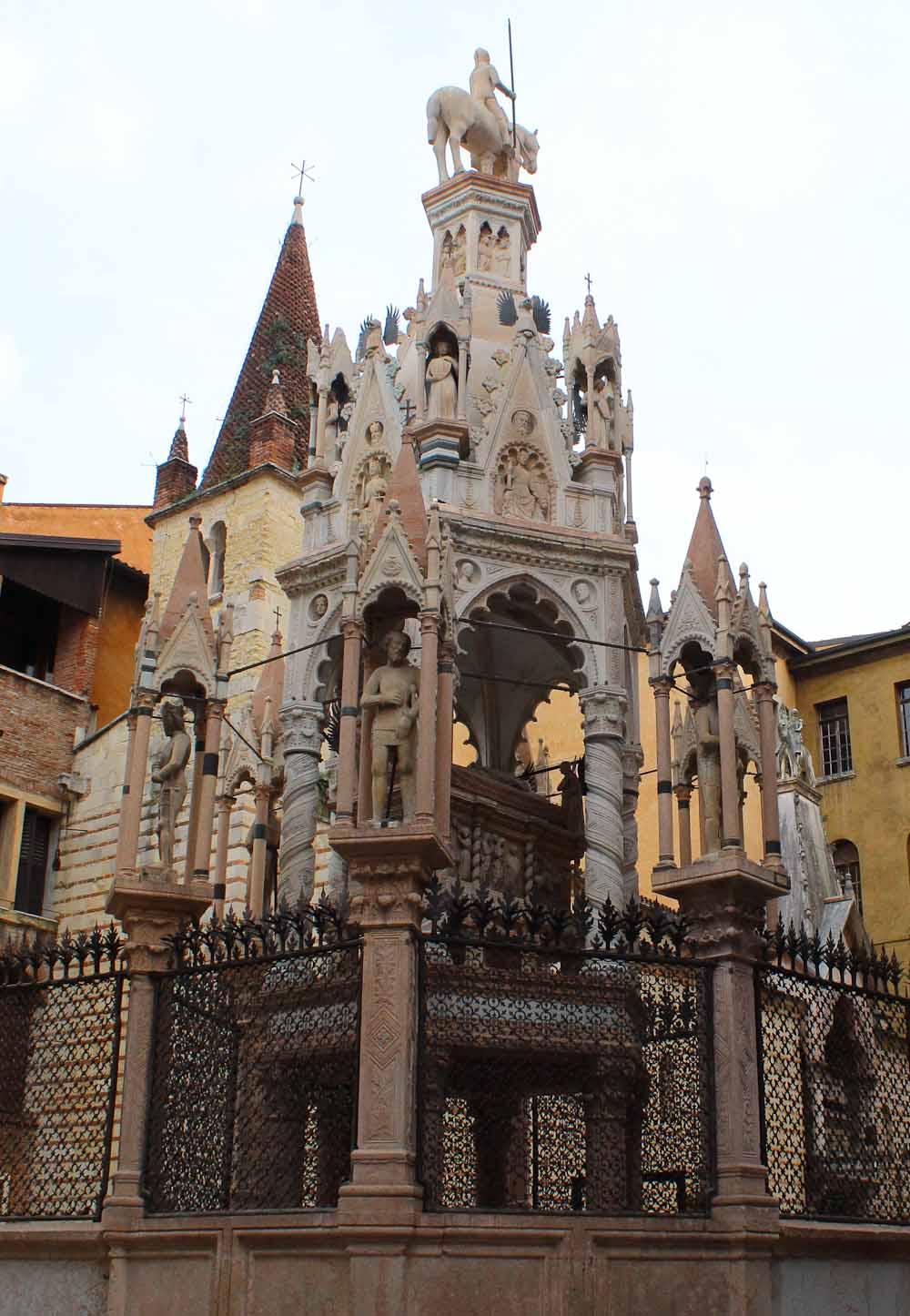 The most richly decorated Scaliger tomb belongs to Cansignorio.

Cansignorio, also known as Marmorina due to his love for antique marble and roman statues, has the most richly decorated tomb with sculptures portraying warrior saints, Gospel figures, the Virtues and the Apostles, along with a large equestrian statue of himself. In spite of his ruthlessness towards his brothers (he later had another brother assassinated to give the succession to his own illegitimate sons), he was considered a moderate ruler by Medieval standards. Cansignorio is said to have reduced taxes and sold corn at less than cost price during bad times. He beautified Verona with palaces, aqueducts and bridges and founded the state treasury.

The fratricides committed by Cansignorio had not been specifically absolved on his deathbed, and it was therefore decided to give him posthumous absolution. Mass was said in the courtyard among the tombs, and the Bishop of Verona climbed a ladder to sprinkle holy water on the sarcophagus.

The remaining two tombs of the Scaligers belong to Alberto, who co-ruled with Mastino. His sarcophagus is the one without a baldachin, and Giovanni della Scala who was a distant cousin to Cangrande II and served as a diplomat in the family business. His monument is built into the wall of a house.

Surrounding the Tombs of the Scaligers is an iron grill where each link has the form of a little fice-runged ladder (scala). The shape is said to be a reference to the story that the first Scalinger either made or sold ladders. 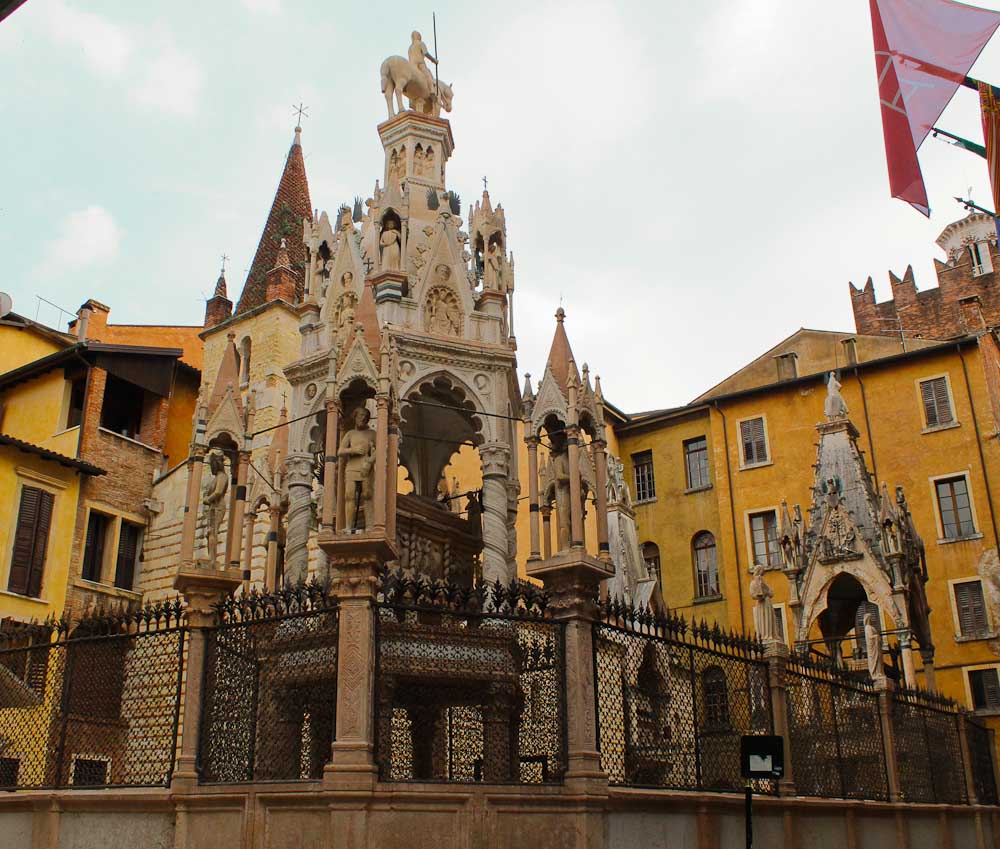 It’s virtually impossible to capture the five Tombs of the Scaligers in one picture, but I gave it a try.

Before he erected the first tomb of the Scaligers, Cangrande was a noted patron of the arts and learning in general. Poets, painters and historians were welcome in Verona during his reign and particularly Dante Alighieri was a frequent guest.

In return Dante lavished praise on his host, who was described as little short of perfect. Dante dedicated the Paradiso to Cangrande, and is said to have sent him cantos of the poem as he wrote them, and in Canto XVII of the Divine Comedy, lines 70–93 he writes explicitly about the Scaligers and “the great Lombard’s courtesy, who bears Upon the ladder perch’d, the sacred bird” and of Cangrande

“.. who was at his birth imprest
So strongly from this star, that of his deeds
The nations shall take note. His unripe age
Yet holds him from observance; for these wheels
Only nine years have compasst him about.
But, ere the Gascon practise on great Harry
Sparkles of virtue shall shoot forth in him,
In equal scorn of labours and of gold
His bounty shall be spread abroad so widely,
As not to let the tongues, e’en of his foes,
Be idle in its praise. …”

Cangrande also appears in Giovanni Baccaccio’s Decameron, where he is portrayed as a wise and generous ruler, while posterity is more ambivalent and subdued in the appraisal of the Scaligers.

The Contemplation of Death

Henry James, for instance, did not know what to think, when he spent some of his Italian Hours in Verona in 1972.

“The Tombs of the Scalingers, with their soaring pinnacles, their high-pointed canopies, their exquisite refinement and concentrations of the Gothic idea, I can’t profess, even after much worshipful gazing, to have fully comprehended and enjoyed. They seem to me full of deep architectural meanings, such as must drop gently into the mind one by one, after infinite tranquil contemplation. But even to the hurried and preoccupied traveller the solemn little chapel-yard in the city’s heart, in which they stand girdled by their great swaying curtain of linked and twisted iron, is one of the most impressive spots in Italy.”

A sentiment echoed by Lord Byron, who remarked that “such a sepulchre renders the contemplation of death less dreadful than our dreary deep and underground vaults.”