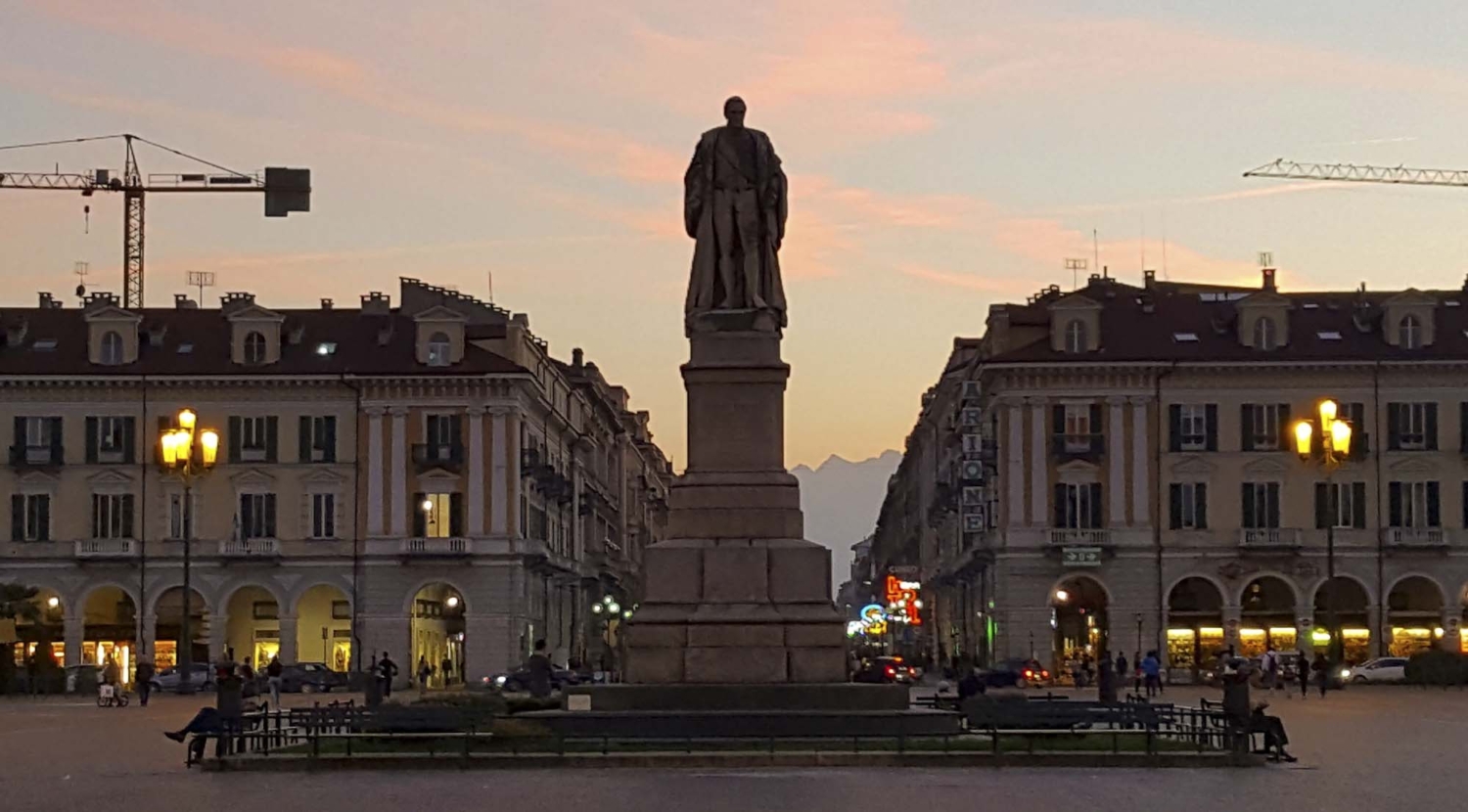 5 things to do in Cuneo

There are round towns, square towns and star shaped towns, but Cuneo in Piedmont is probably the only triangular town in Italy. The geometry of the place is so evident that the word cuneo means ‘wedge’ in Italian, and the people of Cuneo are said to match the place by being orderly and meticulous by nature.


The geographical peculiarities are still visible today. The historic centre of Cuneo is laid out like a checkerboard. The broad boulevards, Corso Nizza and Via Roma, divide the city into an eastern part and a western part, and right in the centre there is a ginormous square, called Piazza Galimberti.

Most tourists who visit the Cuneo province in Piedmont become so engulfed in the food and wine attractions of Alba, Asti and the Barolo villages, they miss out on the allure of the provincial capital. That is a shame, because Cuneo merits a stopover anytime.

Enjoy the surroundings
One of the main attractions of Cuneo are the proximity to great hiking and biking trails along the rivers in Parco fluviale Gesso e Stura or in the surrounding hills and mountains, from where you can observe the peculiar geography of the place.  According to one legend, Cuneo was founded in the 12th century at the confluence of the rivers Stura and Gesso. by a group of men rebelling against the absolute power of the feudal regime, and in particular against the “ius primae noctis” practice allowing feudal lords to have sexual relations with all subordinate women on the night of their wedding.

In order to remain free and not obey others except on their own initiative, the rebels constituted a self-governing commune on a natural plateau defended by two steep banks to the Stura and Gesso rivers. From this position wayfarers could be observed from afar, and the inhabitants only had to defend the southern side of the town. 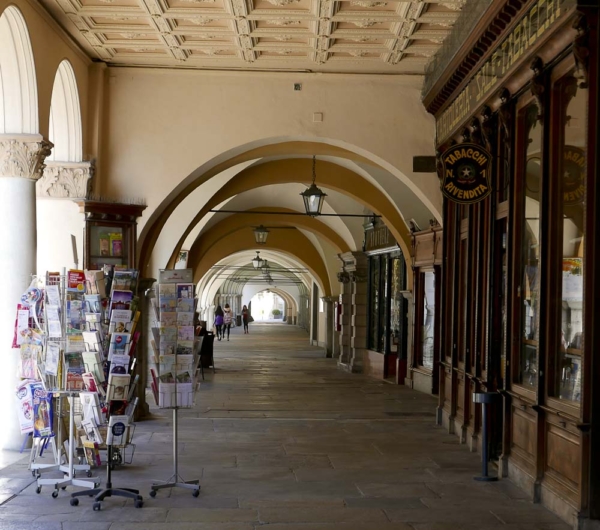 Walk through the centuries
The founders of Cuneo settled at the pointed end of the wedge, at the end of what is today via Roma. Every year since then new rows of houses have been added and the town has grown a few metres with the peculiar result that you can walk through the centuries along the main boulevards. Starting from Piazza Torino you’ll see the bishop’s Palace, the baroque Church San Ambrogio and the Torre Civica from the 14th century. The pedestrianized Via Roma is lined with portici arcades of gradually increasing proportions. Stop to take a look at number 29, a Medieval tower which has recently been refurbished, revealing interesting brick patterns and Gothic cornices around the windows.

Further along patches of the original decorations have been preserved. In number 56 there are images of a white unicorn from the owner’s coat of arms and Sybils which were a favourite icon of the renaissance.

Once you have crossed the huge neoclassical Piazza Galimberti and continue along Corso Nizza you move closer to the architecture of modern times, but you might still find interesting historic buildings like the fabulous art deco Palazzina Galliano 1912 on Viale degli Angeli. 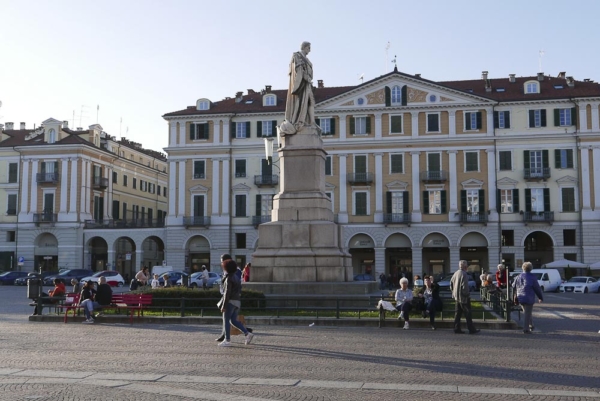 Spend time in the living room of Cuneo
On the way through town you might make a stop at the Piazza Galimberti, the gigantic open square often referred to as the living room of Cuneo. The piazza was constructed in 1800 after Napoleonic troops had broken down the city wall. At that time the square was only half the current size, but it was soon extended to accommodate an increasing number of inhabitants due to the booming silk trade, which was Cuneo’s main industry.

The piazza was originally named Piazza Nuovo and then Vittorio Emmanuele, but in 1945 it was decided to honour the great local hero of the Italian resistance, Tancredi Galimberti, and name the piazza after him. Galimbert was born in Cuneo in 1906, and killed by the fascists in 1944. He lived in number 6, which has now been turned into a private museum. In front of the museum there’s a stone with a famous quote from an announcement he made from his balcony in 1943.

The statue in the centre of Piazza Galimberti erected in 1879 is weirdly enough another local hero from a previous century. Giuseppe Barbaroux was born in Cuneo in 1772, he was a legal mastermind and became a lawyer and ambassador for the Savoy Kingdom in Rome. He was also given the task to reform the legal system which included abolishing certain established privileges. This made him hugely unpopular, and he ended up taking his own life in 1843 .

The bronze sofa with a reading man on the edge of Piazza Galimberti is a tribute to the fictional character of Ulisse in the James Joyce version. The book he is reading says “ragiono e canto” as a reminder of both the rational and the irrational aspects of life. 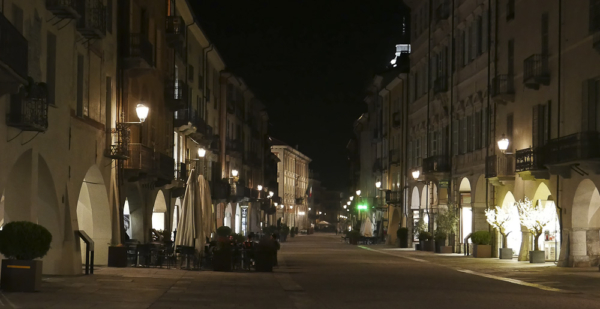 All restaurants are located side by side in via Dronero

Eating out in Via Dronero
The place to eat in Cuneo is Via Dronero, where all the trendy restaurants rub shoulders. We were lucky to get a table at ‘I 5 Sensi’, where they offered a memorable ‘Menu Degustazione’.

We had steak tartare from Piedmont calf with egg yolk, brown stock and 7 month’s old Castelmagno cheese, salt cod with aioli, jerusalem artichokes and purple potato cream and crisp fried pasta with pears, smoked leeks and gorgonzola cream for starters. Then a serving of the most delicious ravioli plin with chestnut sauce and pancetta crumble. The meat course was pork spiced up with ginger and paprika and slow cooked in local beer from Bra. And the meal ended in chocolate cake with a bleeding heart, almond crumble and granita ice cream on green apples.

No doubt that the food is one of the main attractions of Cuneo. 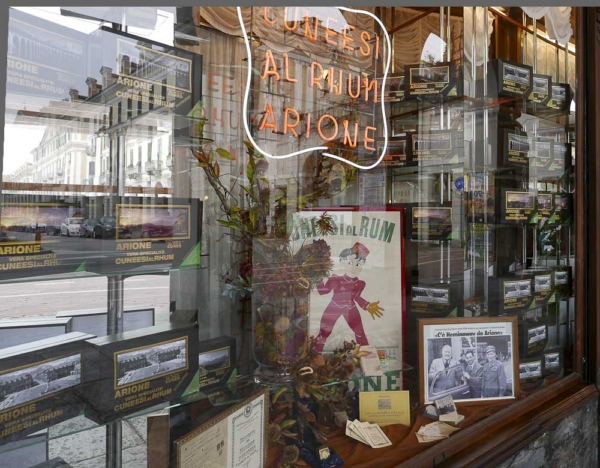 Shop souvenir chocolates like Hemingway
After a dinner like that there is no room for more food, but you shouldn’t leave Cuneo without tasting their celebrated filled chocolates called ‘Cuneesi al Rhum’ from Pasticceria Arione on Piazza Tancredi Galimberti. Cuneesi al rhum are small meringues with a dark chocolate coating and rum-flavored chocolate filling that were first produced in 1923, and became famous outside of Piedmont in 1954, when Ernest Hemingway stopped to purchase chocolates on his way from Milan to Nice. Even today 70 years later a photo of that legendary visit is still displayed in the window of Arione.

Where to stay
We stayed at the Best Western Plus Royal Superga Hotel, just off Piazza Galimberti on Via Carlo Pascal 3. It’s a quiet, good medium standard and the location is perfect for exploring the city.