The strange symmetry of

Castel del Monte is one of the must-see sights of Puglia. A mystic kind of place hinting at Medieval astrology, mythology and complex mathematics.

Castel del Monte is a World Heritage site sitting on a 540-meter hill, 18 km from small town Andria in Puglia. A weird, mystic kind of place, which I can’t quite place and therefore haven’t written about before. Still, it is one of the must-see sights of Puglia.

The mystery begins as you approach the site. Castel del Monte can be seen from afar floating over the flatlands as you drive along narrow country roads, only to disappear when you park the car and start climbing the hill, side by side with soft drink and souvenir vendors and busloads of Italian school classes and other tourists. On top of the mount there’s this majestic castle baked by the sun and surrounded by a 360 degree view of nothing – apart from yellow-brown fields and a scattering of olive trees.

It makes you wonder why anyone would place a castle here? What did they use it for? And who planned the layout that plays around with astrology, mythology and complex mathematics? So far, no one has managed to figure out the answers.

“8” as the designing principle

Castel del Monte was built by the Frederick II and completed the year of his death in 1250. Its design uses an octagonal floor plan flanked by eight towers and eight rooms on the castle’s two floors, making it a ‘unique piece of medieval architecture’ according to the accolade of UNESCO. In the centre is an eight-sided courtyard once fitted with an octagonal fountain. The eight towers contain spiral staircases, and nearly all the 16 rooms have intercommunicating doors. There is just one single entrance and exit.

There are no traces of a kitchen, a moat or a drawbridge, and the castle is not located near trade routes or points of strategic importance. The structure does not seem to have been a residence nor to have served a military purposes, and interior decorations were far too valuable for a prison. 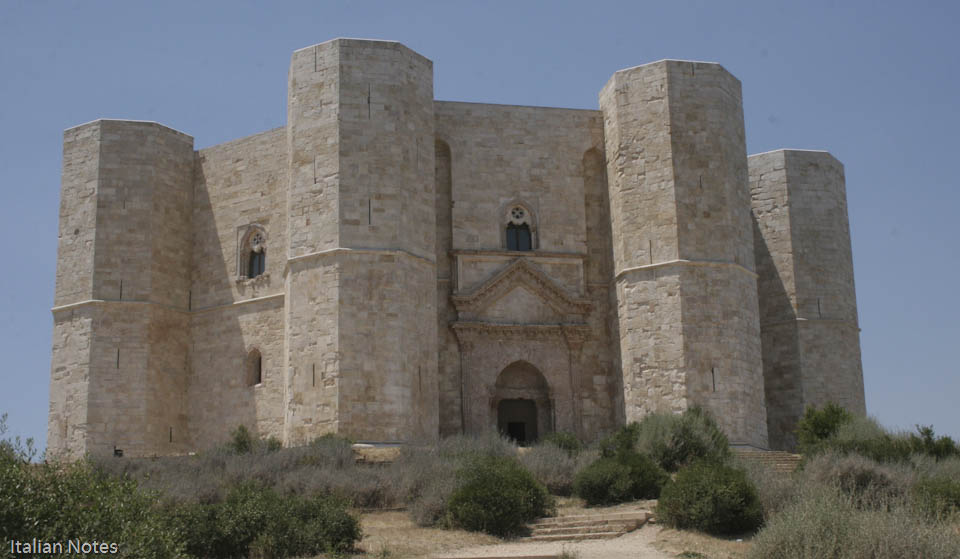 The most probable explanation for the castle’s purpose has to do with Frederick II passion for falconry. Hunting with birds was a hobby he picked up during a crusade to the Middle East, and in 1248, he wrote an authoritative guide to the sport. He is also credited with introducing the bird’s leather hood to Europe.

Castel del Monte contains a “Falconer’s Staircase” leading to the roof, where birds could be kept, yet the castle seems a bit too pretentious for a simple hunting lodge. The complex design and perfect proportions also suggest an interest in astronomy, astrology and physics.

Hints to the Fibonacci Sequence

Before the crusade, Frederick II founded the University of Naples and met the great mathematician Leonardo Fibonacci, who introduced the Arabic numeral system in Europe. This does not explain the obsessive repetition of the number eight in the construction of Castel del Monte, but it has led historians search for a concealed meaning. The figure eight has been seen as a symbol of infinity and resurrection, and they have even pointed out that shadows in the octagonal courtyard form the Golden Ratio used in the Fibonacci Sequence. It’s all very mystifying.

Still, the astrological or mathematical invocations did not do Frederick II much good. He died from dysentery in 1250 (don’t add up the figures), 16 years before the fall of the Swabians in south Italy. Castel del Monte was briefly used as a prison and as a place of refuge, but it soon became abandoned to brigands and shepherds. Today the state has taken over along with innumerable visitors walking around the mostly empty and windowless rooms as if they haven’t got a clue of what the fuss is about. Still, Castel del Monte is the kind of place that stays with you as a magic vision.