The EUR district of Rome

The interrupted dream of Benito Mussolini

In the 1930s, Benito Mussolini dreamt of celebrating 20 years of fascism with the opening of a grand new city centre in what is now known as the EUR district of Rome.

The vision of the EUR district of Rome started with a proposal from the governor of Rome, who wanted to host the World’s Fair in 1942. Mussolini liked the idea and saw it as an opportunity to celebrate the twentieth anniversary of the March on Rome and the beginning of the Fascist-era, and for this purpose he wanted to build a shining new city of permanent buildings designed by the most prominent Italian architects available. With green recreational areas, modern infrastructure and monumental buildings the new city centre should last eternally as an updated version of the Rome’s historic centre.

An autonomous agency called E42 (Esposizione 1942) was formed to drive the project. The agency owned jointly by the municipality of Rome and the Ministry of Economy later changed its name to EUR as an abbreviation for Esposizione Universale Roma, and they started to develop an area of 4 km2 in the south-western outskirts of Rome with the help of such architects as Marcello Piacentini, who also designed Il Torrione in Brescia, and the rationalist Giuseppe Pagano Pogatschnig. 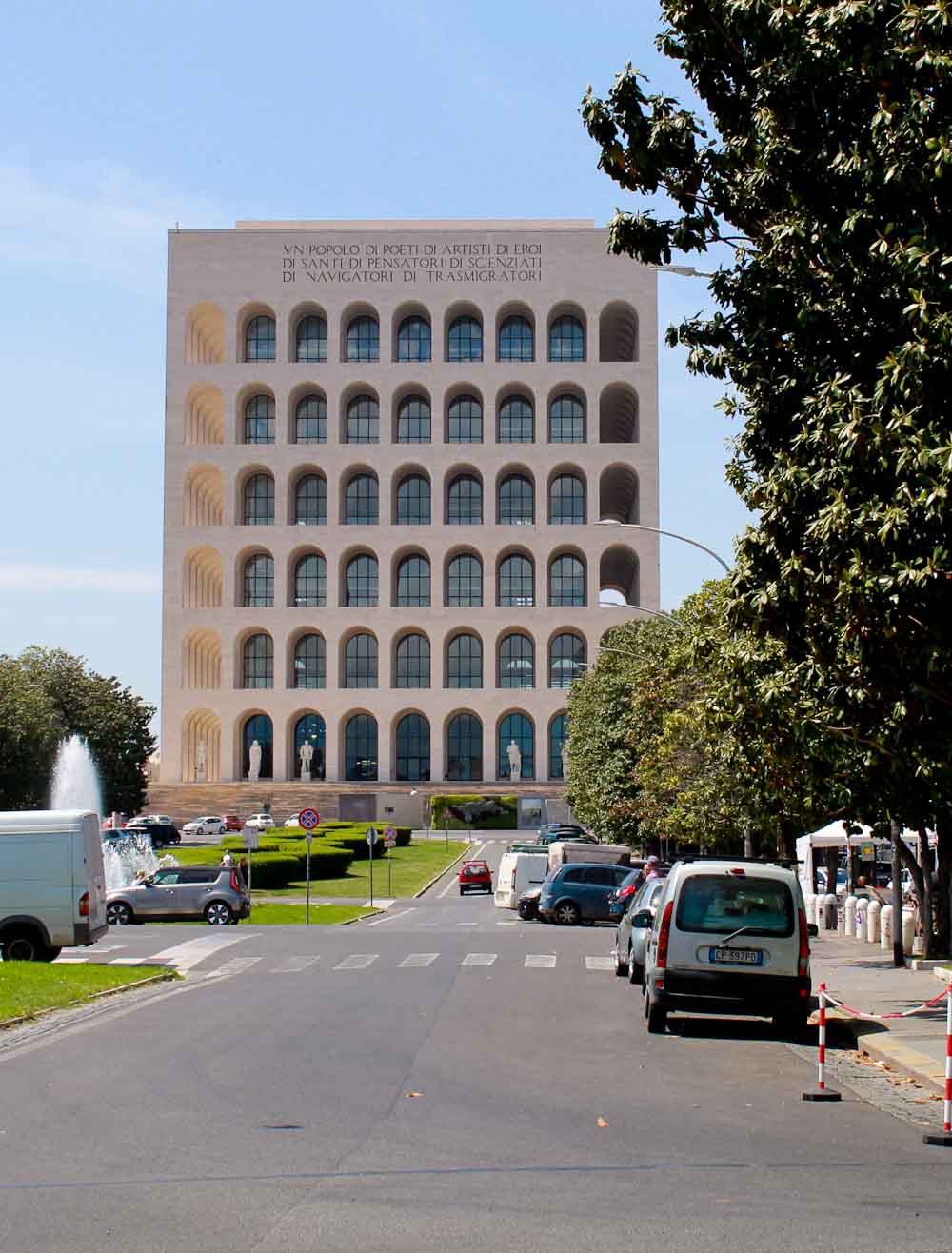 Palazzo della Civiltà Italiana aka the Square Colosseum was the first building to be inaugurated in the EUR district of Rome. The straight geometric lines, white marble and enormous proportions characterize most structures in the area.

In 1938 the first plans that included the iconic Palazzo della Civiltà Italiana aka the Square Colosseum were presented. This building was inaugurated on 30 November 1940 as the centerpiece of the planned Expo, but soon afterwards works had to stop and the project was left uncompleted due to World War II.

During the war the EUR district of Rome was severely damaged and Palazzo della Civiltà Italiana was left empty and abandoned for over a decade. In this period the temptation to eliminate all traces of the fascist-era was great, but instead it was decided to finish the project as a monument to the fallen fascist ideology and develop it further as a basis for a visionary out-of-town business district, years before such areas were planned in London and Paris. In consequence, unfinished buildings were completed and supplemented with new designs and in 1960 the Olympic Games were held in the EUR district. 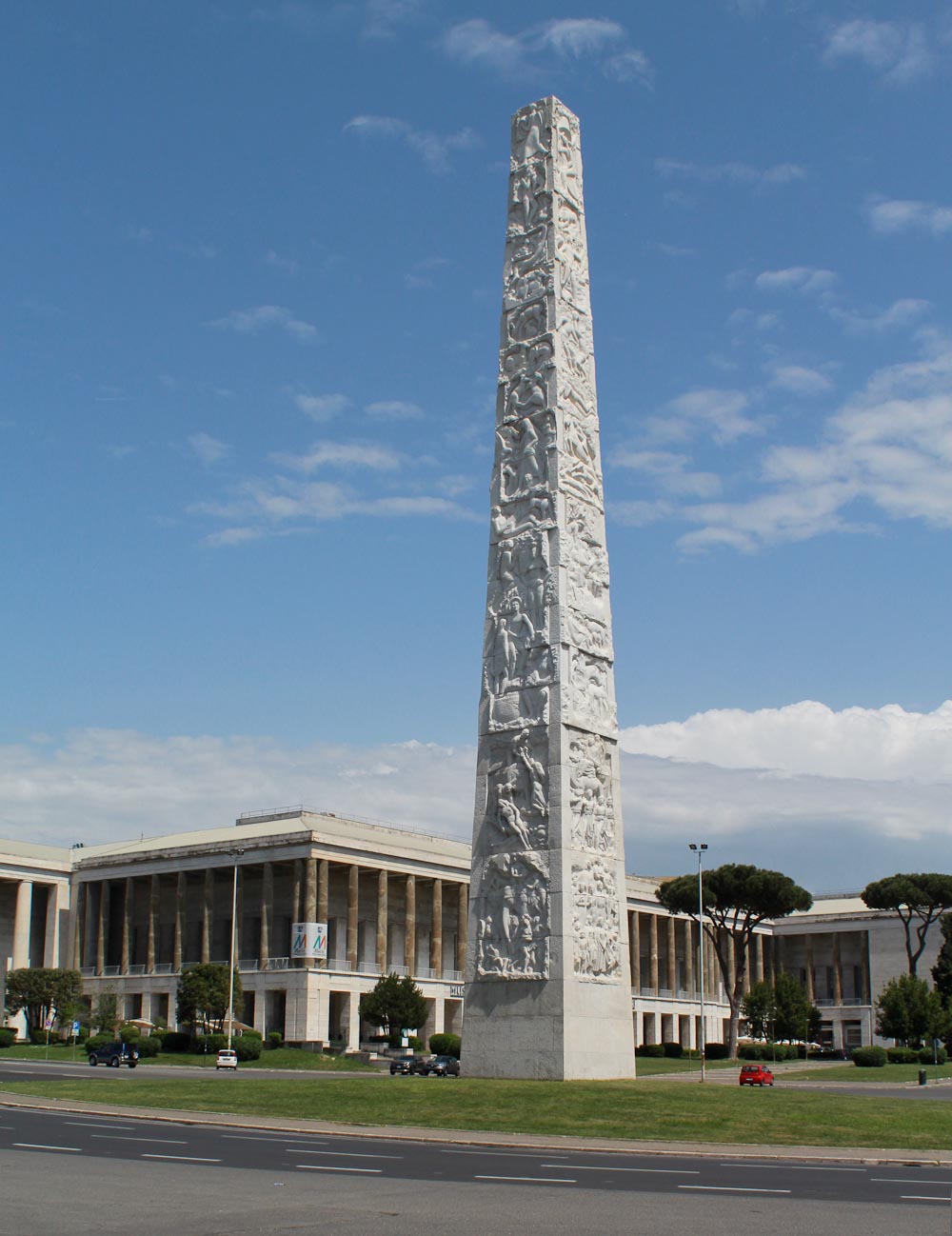 Piazza Guglielmo Marconi with the stela in Carrara marble by Arturo Dazzi, dedicated to the inventor of radio. The central piazza on the broad avenue connecting Rome and the sea is surrounded by museums.

Since then the EUR has gradually expanded with new parks, sport arenas, museums and residential areas, but it has maintained the coherent neoclassical and rationalist urban style along with its Utopian quality. As such, it it a fantastic and fascinating place to visit and a great many movies have been filmed on location in the EUR district of Rome.

The blue metro line B runs directly from the centre of Rome to the EUR district with a frequency of 3-9 minutes depending on the time of day, and it’s a great place to stop, if you have got a couple of hours to spare before catching a plane from the nearby Fiumicino airport. Especially, during the weekends, when the offices are closed and there is plenty of space to take in the enormous proportions and perspectives of these unique buildings and urban designs.