The Contrasts of Carrara

The Tuscan city Carrara is full of strange and beautiful contrasts that are a delight to experience and explore.

On our way to Carrara, we stopped by the coast to soak up the last rays of the sun. It was a fine autumn day, but heavy grey clouds lined the eastern horizon, so there was no need to hurry inland. Unfortunately, wide stretches of the broad sandy beaches were basically inaccessible. The sea and the sand had been fenced in by beach clubs, one of which held the promising name ‘Paradiso’, but like all the other summer establishments this paradise was closed. A first hint of the many contrasts and contradictions that came to define my impression of Carrara. 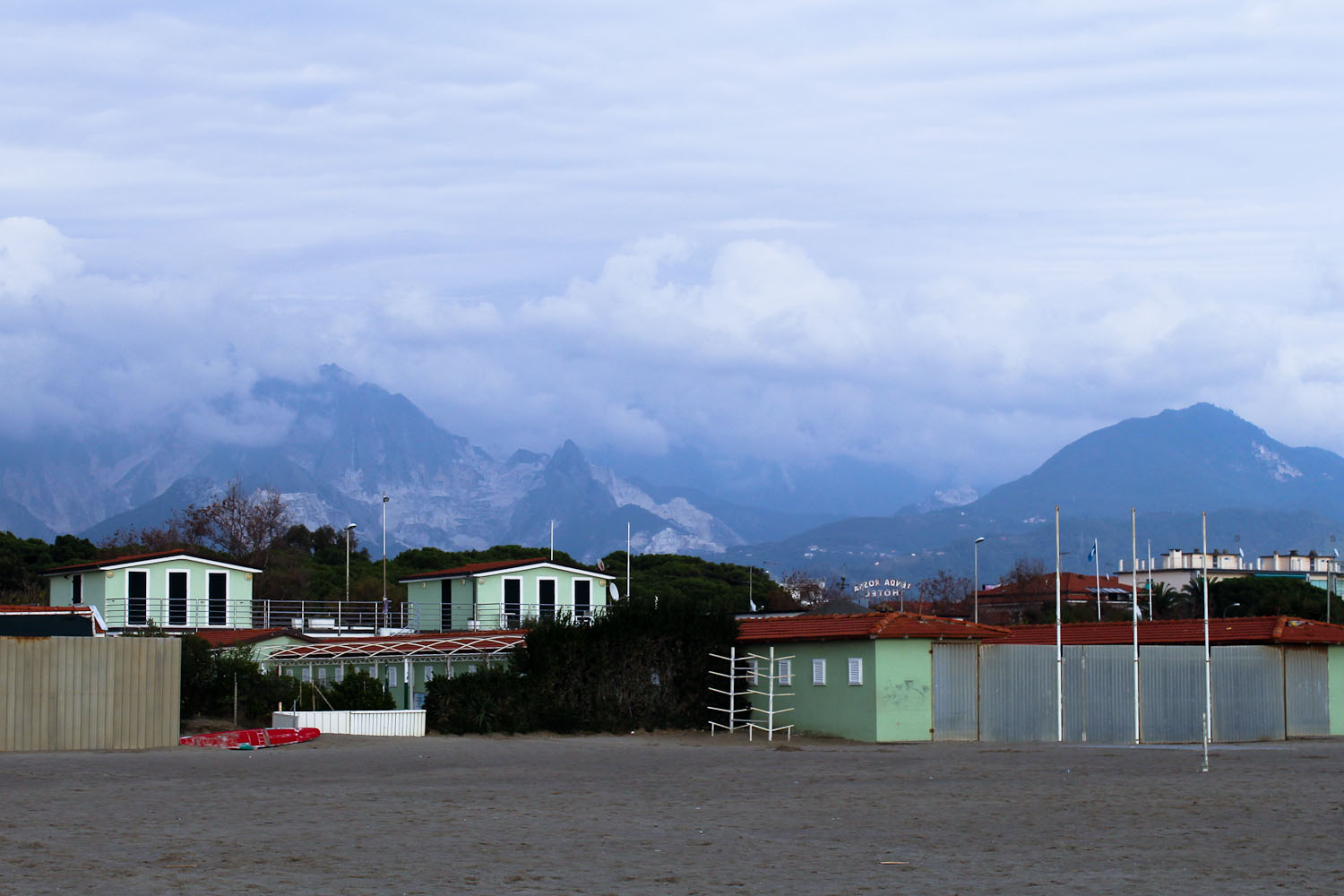 Seen from the seaside, the marble mountains look like ski-resorts.

I’d wanted to visit Carrara since the first time we drove by on the motorway and saw a line of discos and beach establishments on a background of what appeared to be snowcapped mountains. You know it’s an illusion, but the intestines of the earth that have been exposed by centuries of mining look so glittering white, you have to go there to convince yourself that this is not newly fallen snow merging summer and winter.

But before going up to the quarries, we wanted to explore the city, and it soon became evident that in Carrara things are not what they appear to be.

We had booked a room in a small hotel located on the bank of a tiny river. The river was little more than a stream dividing two rows of houses in the old centre of Carrara, and I thought the tinkling water was beyond charming with pieces of marble making rivulets in the water, but the landlady woke me up from my reverie.

To her it was a challenge to maintain a house with part of the foundation under water, and besides the river Carrione was not exactly an innocent stream. In fact it has flooded the town and caused several deaths three times over the past five years.

I looked up on the white mountain tops above town and repeated to myself: ‘Ceci n’est pas une piste’. 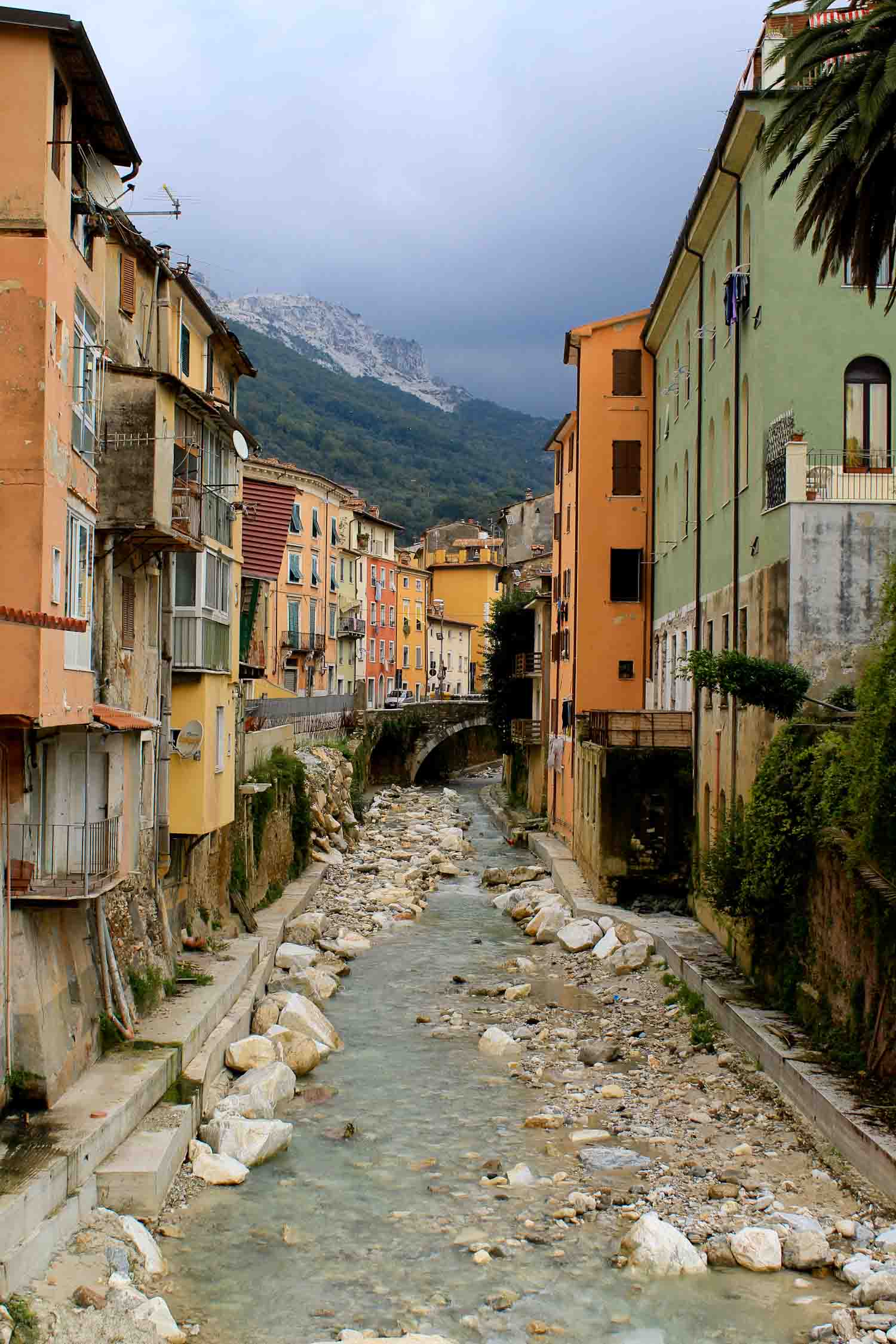 I’ve rarely seen a road in Italy as straight as Viale XX Settembre that leads from Marina di Carrara up to the city. It’s almost 6 kilometres of unswerving, no nonsense, geradeaus, well regulated traffic.

Once you’ve passed the city, however, the road strikes back with a vengeance. It twists and turns is way to the village of marbled lard Colonnata and further up the mountain to the stone quarries on top.

I’m sure a Freudian analyst could derive some sort of meaning from this. Personally I’m not sure which stretch of road represents the id and the superego. 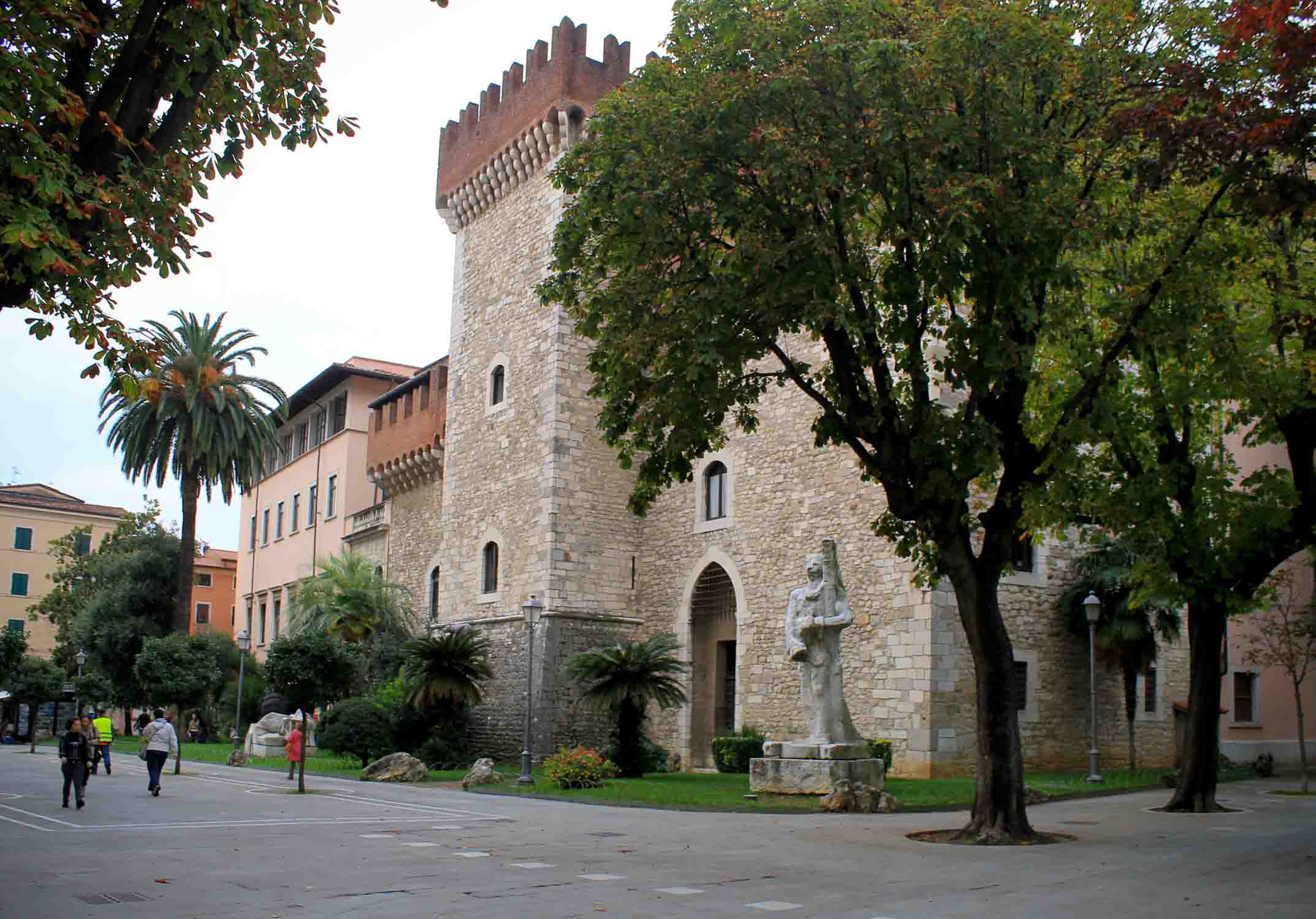 Palazzo Cybo-Malaspina that houses the academy of art in Carrara

As a traditional mining town, most families in Carrara are to some extent economically dependent on the quarry. Through generations they have invested years of hard, invalidating labour in the enterprise of prying white rocks from the mountain. Some of these white rocks have been used to created immortal works of art and beauty like the Pantheon in Rome and Michelangelo’s sculpture of David, but most of the production feeds an insatiable demand for luxury bathrooms and consumer products such as paper, plastic and paint.

The mundanity of modern marble production may explain why outdoor public art in the commercial part of Carrara is made from stainless steel like the numbered rings and spheres marking the – possibly temporary – beginning of a pedestrian street. 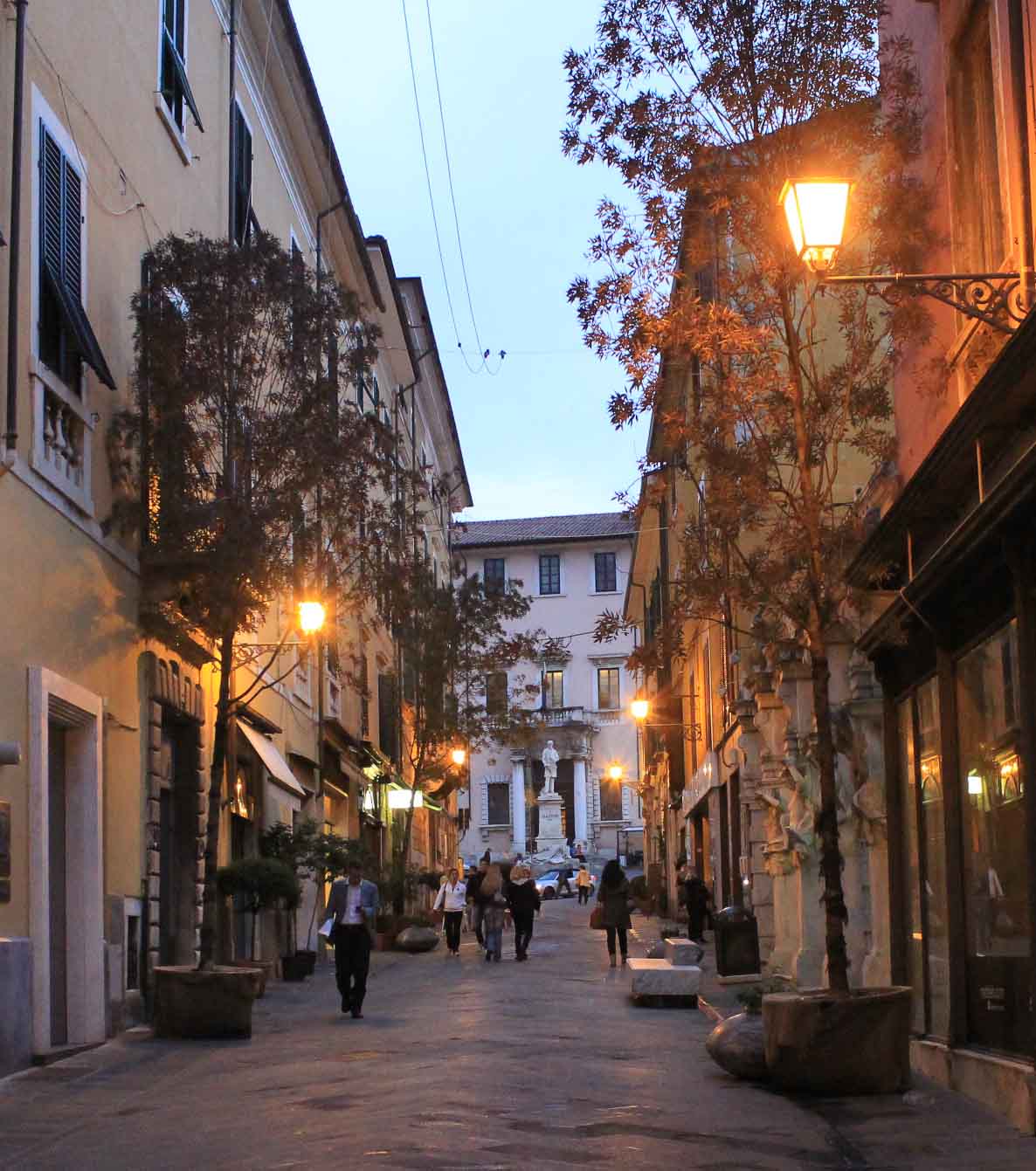 Walking around Carrara I was impressed by the quiet, orderliness. The streets are relatively broad, motorized traffic has successfully been banned from the inner city, houses in general look comfortable and well-maintained, and there are the usual groups of men hanging around the piazza for a peaceful chat.

Based on immediate observations, I’d say Carrara makes a cushy nest for the local borghesia and nobility, but the subdued affluence stands in stark contrast to Carrara’s reputation as the cradle of Italian anarchism.

Towards the end of the 19th century, work at the marble quarries was so hard that any willing and able bodied man could find employment. This attracted a number of ex-convicts and fugitives from justice along with some violent revolutionaries, who had been expelled from countries in central Europe. They started organising labour union in mines and carving sheds and founded anarchistic groups, which eventually led to the Lunigiana revolt in 1894. The revolt was suppressed violently by the carabinieri and 11 protesters were killed.

Today the anarchistic movement is mainly visible, if you visit Carrara on Labour Day, May 1, but there are small glimpses of lawlessness all over the city, if you know where to look. On Piazza Gramsci there’s a monument to Alberto Meschi and the anarchistic movement, and by the cathedral there is a venerated statue of the martyr Giordano Bruno, who rejected all Catholic beliefs that rested on mere authority. There’s an anarchist bookshop called Circolo Gogliardo Fiaschi in Via Giuseppe Ulivi, where you can find used and new books on anarchic philosophy along with texts on local history. And some restaurants like Osteria Capinera have occasionally got local dishes with a reference to anarchy on the menu. 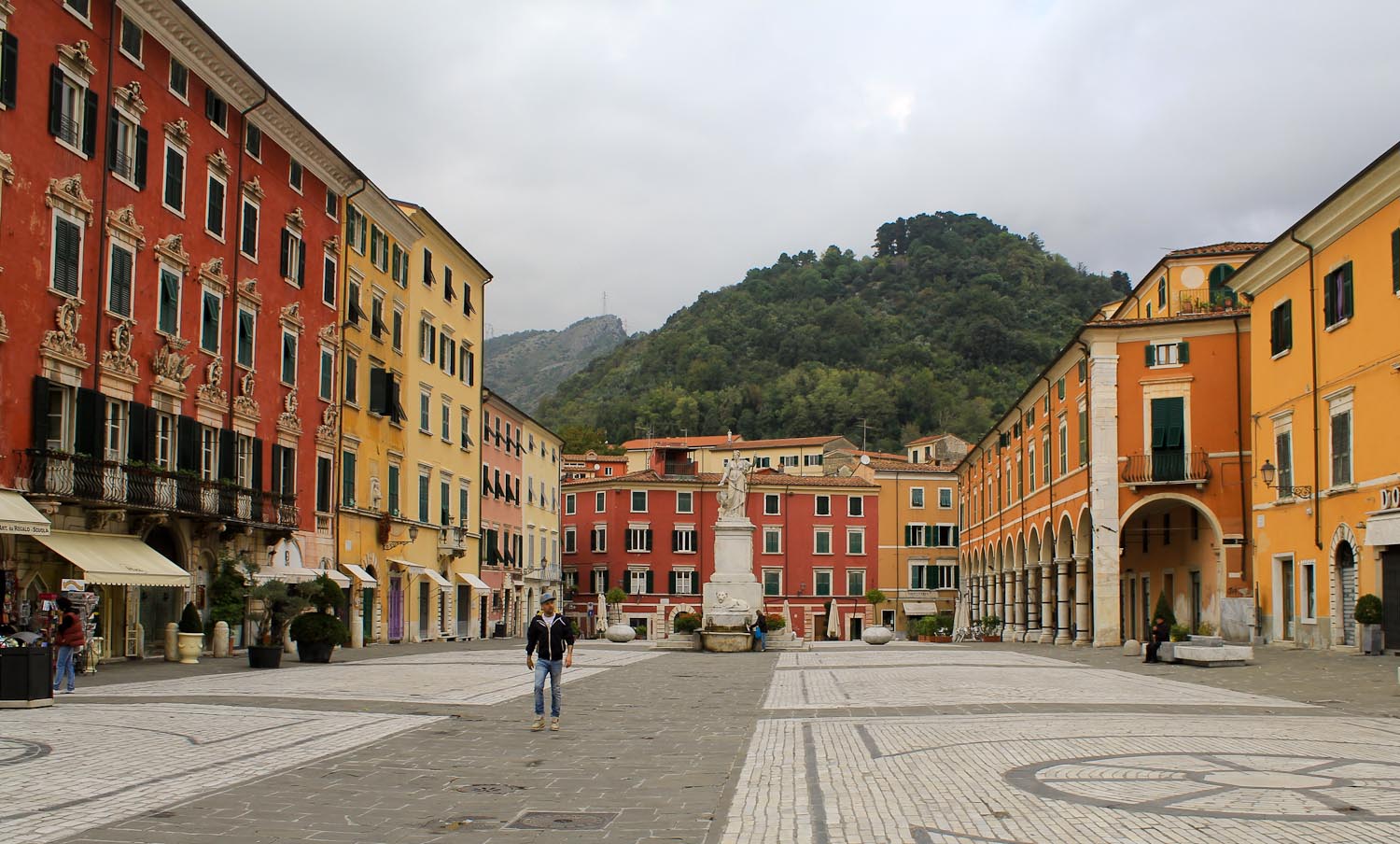 It is said that there are 40 kinds of marble in the Apuan Alps, each one named for its particular colour and texture. A lot of these stones are displayed either at the marble museum Museo Civico del Marmo on Viale XX Settembre, in the Museo della Scultura on via Canal del Rio or during the annual marble weeks. And the marble comes alive in the historic buildings, pavements,monuments and sculptures throughout the city of Carrara.

It’s great to walk around town looking for slabs of mountain, appreciating the different shades and shapes. Take the beautiful Piazza Alberica as an example. The pavement consists of a pattern of marble squares that form ten large decorative panels, and in the middle there’s a wonderful fountain with marble basins and sculpted lions guarding a statue of Maria Beatrice d’Este, the duchess of Massa.

The soft grey and white paving are surrounded by bold dashes of colour. The houses lining the piazza are painted in strong red colours of blush, crimson and rose alternating with amber, peach and saffron, giving the cold marble city a wonderfully warm and welcoming expression.