Cima ripiena
This recipe for stuffed breast of veal  supposed to derive from Liguria, but I have left out the offal to make it less traditional but more mainstream.

Originally this recipe is supposed to derive from Liguria, where they have a pendant for brains, sweetbread and other exotic ingredients, if you are a stranger to offals. For this reason, and because I always seem to end up with much more stuffing than the meat pocket may possibly contain, I have weeded out about half the official ingredients, and still most people tend to like it.

I also replace the cut with a leaner kind of meat like rump or round steak, if the breast looks too fat, but this is a matter of taste, as some (mainly men) might find the dish too “dry”. Both ways it should be praised for looks. And it can be prepared well in advance.

Preparation
Soak the dried mushrooms for a couple of hours. Save the water for broth.
If you have not asked the butcher to cut a pocket in the meat, you do it yourself by making a horizontal incision into the middle of the steak with a sharp knife. The pocket should be as deep as possible.
Chop carrot, mushrooms, garlic, herbs and pancetta finely. (Bacon can be used as a pancetta substitute, though I find the taste too smoky)
Mix bread crumbs and parmesan with pine nuts, salt, pepper and all the finely chopped ingredients.
Stir in the beaten egg:
Fill the stuffing in the pocket in the meat and sew up the opening or tie it up with kitchen string.
Bring 2 litres of lightly salted water to the boil. Add whole onion, leek, carrot, bay leaf, herbs, pepper corn, soaking water from the mushrooms, etc. to make a broth.
Immense the stuffed veal in the broth and let it simmer gently for an hour and a half, or until tender.
Leave the meat in the broth to cool, before carving it in thin slices.

Run the broth through a sieve and use it to make risotto or soup for primi piatti. 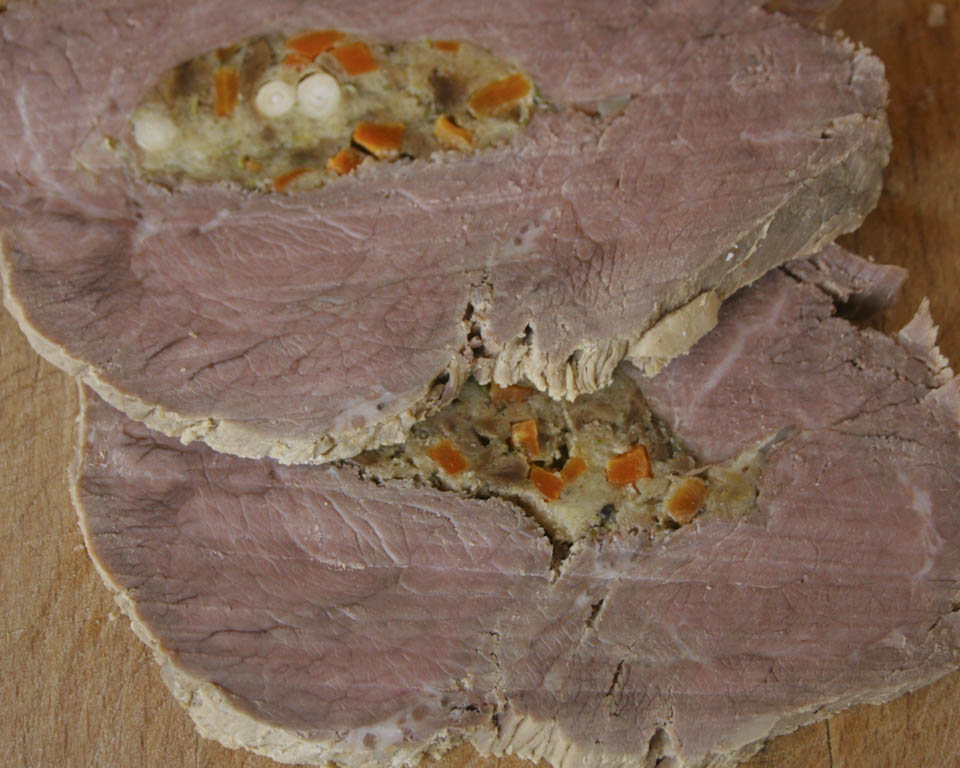 Terracina history: From a City in the Swamps to a Holiday Paradise
Scroll to top