Stories from Piazza Navona in Rome

The iconic Piazza Navona is a must-stop on Roman itineraries, because it captures the essence of the city. Here are some stories that might make your visit to Piazza Navona more memorable.

Nothing is more quintessential Roman than Piazza Navona. Here you’ll find tourists and locals, highbrows and lowlifes, palaces and pizza joints, classic art and caricature, hustlers, buskers, pickpockets, dandies and aristocrats gathered in one place of picture-perfect beauty in pink, yellow and red hues. And although the presence of levitating Indians, street painters and New Orleans Jazz bands may seem like a recent corruption, the present atmosphere on Piazza Navona has probably not changed all that much since medieval times. 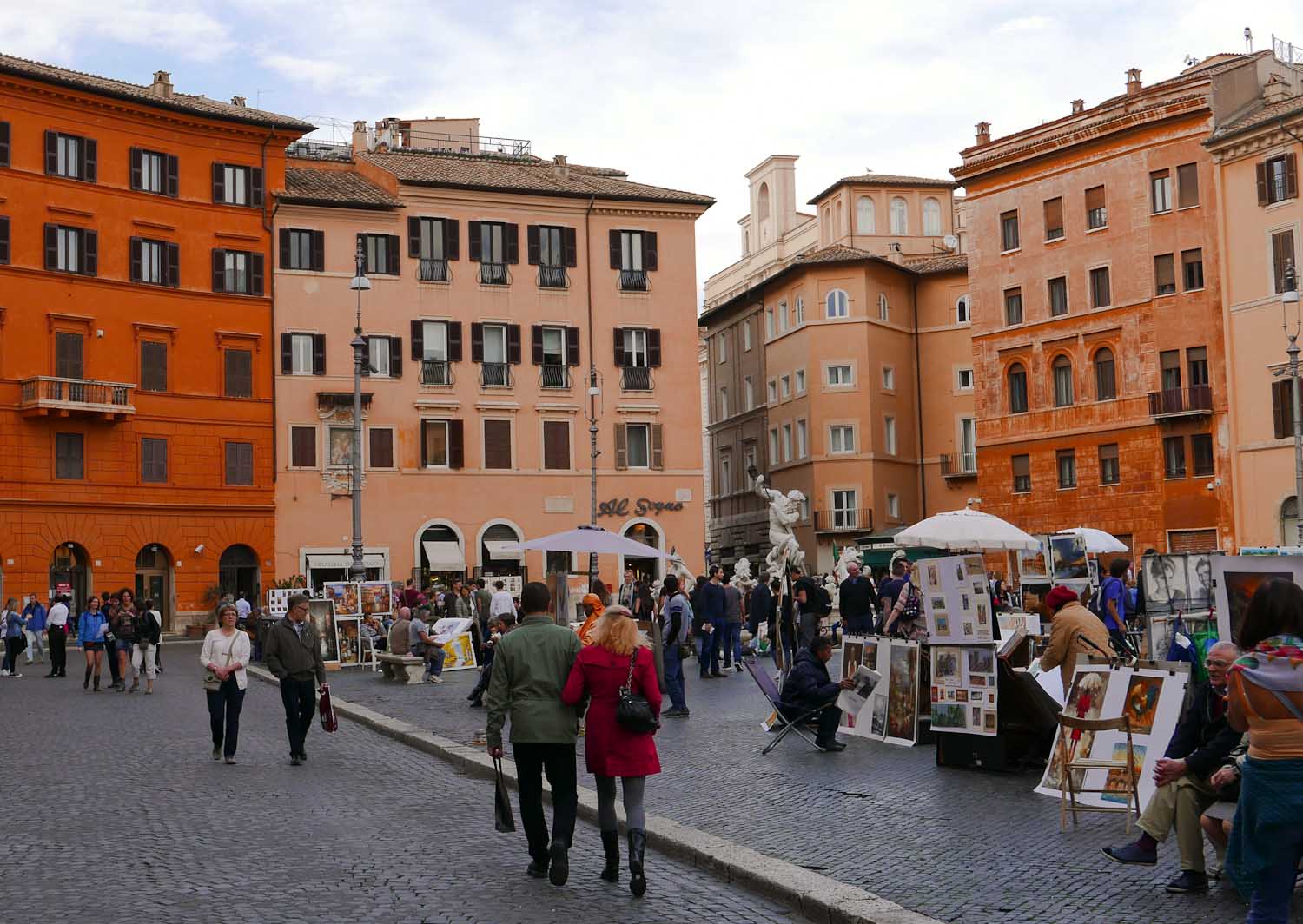 The Baroque piazza was built in the 15th century as a market place and circus, where people in the surrounding houses could watch various types of contests and spectacles. As a market place the scene is more magnificent than useful. There was no shade or shelter to protect the peasants from the sun and the rain.

Market vendors opposed the construction of the fountains on Piazza Navona, and in consequence they were expelled from the piazza. The eccentric Pope Innocent X, who excommunicated people for taking snuff in Saint Peter’s, thought the vendors detracted from the magnificence of the square, and when the vendors refused to move, they were chased from the piazza by the papal police. Particularly Roman Jews deplored the closing of Piazza Navona, since they were allowed to sell used articles of clothing there at the Wednesday market.

There are three fountains on Piazza Navona with Bernini’s Fontana dei Quattro Fiumi from 1651 in the centre. With the reign of Pope Innocent X Bernini had suffered a fall from grace, but the pope was tricked to entrust the design of the prestigious fountain to the sculptor, and when the great fountain was inaugurated Innocent X spent two hours examining the piece.

According to the obscure author M. Valery’s book Travels in Italy from 1839, the Pope was sad to note the absence of water at the inauguration, but Bernini promised to do his utmost to serve and before the Pope had left Piazza Navona, water rushed through. To celebrate Innocent X immediately sent for one hundred gold coins to be distributed among the workmen. 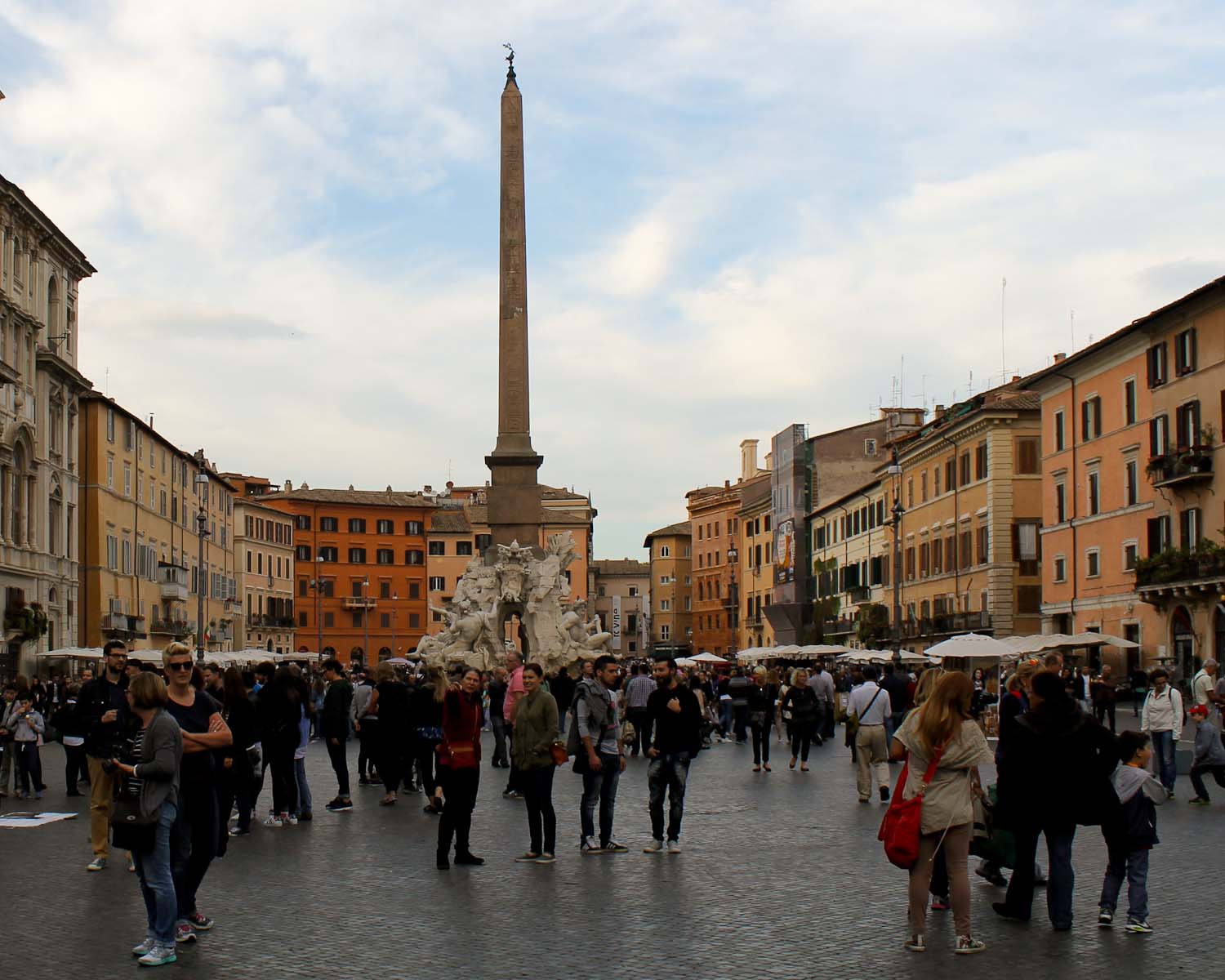 The four rivers fountain with a tall obelisk

Four rivers and their symbols

The obelisk of the fountain was transported to Rome during the reign of Caracalla and had been buried under the ruins of his circus. The four giants and symbolic animals represent the largest rivers of the four quarters of the world, the Ganges with the serpent represent Asia, the Nile and the lion is symbolic of Africa, the European Danube figure is paired with a horse and the Americas are represented by the river Plata and an armadillo. A veil covers the head of the Nile as an illusion to the then unknown source of the river. In addition, some claim that the cowering Rio de la Plata was an epigram against Bernini’s implacable rival Borromini, so that the figure might not see Borromini’s front of the church of Saint Agnes, regardless of the fact that the fountain was completed years before Borromini began work on the church.

The other fountains, Fontana del Moro and the Fountain of Neptune in either end of Piazza Navona were created by Giacomo della Porta around 1574-1575 and elaborated on by Bernini 100 years later. Initially these fountains without the statues were part of the city’s infrastructure supplying fresh water for drinking and washing to the public, like the celebrated Trevi Fountain, but in the 19th century their visual and political importance increased and the imposing statues were added. 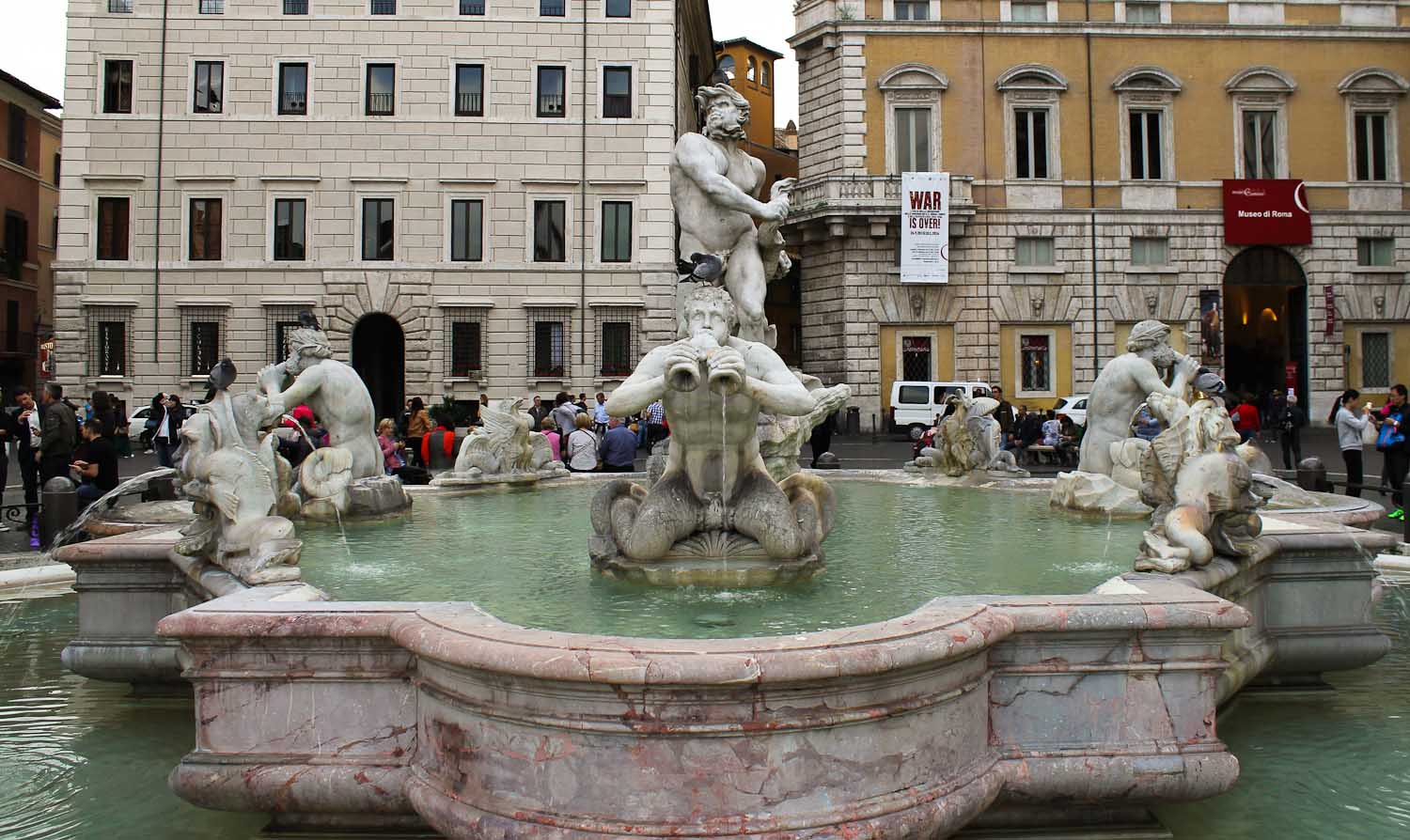 On Saturdays and Sundays in August drains from the fountains on Piazza Navona were blocked in the afternoon, so that the piazza was overflowed with water to clean away market waste. The shallow lake was crossed and recrossed by carriages, applauded and cheered forward by crowds gathering in the windows.

The expulsion of evil

On the night before Epiphany the people of Rome gathered just after supper with puppets, pasteboard figures and makeshift musical instruments and marched towards Piazza Navona making a hideous din. The noise is in honour of the old. hag Befana, and though her name is clearly a corruption of the Christian Epiphany, Sir James Frazer suspects her to be of heathen origin. He sees the noisy rite in Piazza Navona as a relic of an annual expulsion of evil that would free the people from all malignant influences and allow the to make a fresh start.

Pin it for later! 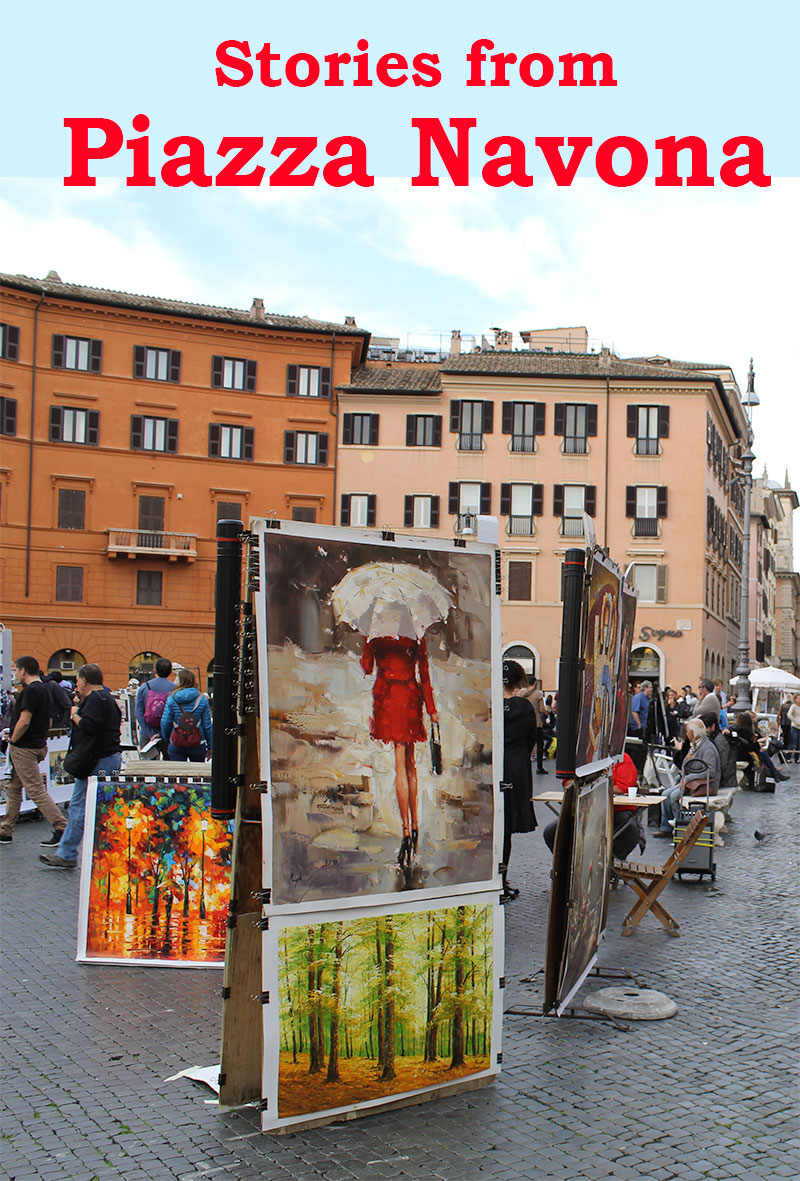 Nasturtium pesto with walnuts and cheese
Scroll to top