Most travelers in Italy have seen St Peter Basilica in Rome. Even from a distance you cannot very well miss the characteristic pillars and domes. And the interior of the church is grand, stupefying and free for all.

As long as you are decently dressed. No shorts and tank tops for men or sleeveless miniskirts for women are allowed past the Swiss Guards. This can be quite hard in summer. I think we had to try three times, before the entire family could pass the dress code at once. Still, the visit was absolutely worth the uncomfortable attire, because there are so many interesting details and stories hidden all around the building. Here are 5 things you might not know about St. Peters Basilica in Rome.

The inside of the Basilica can hold up to 60 000 people, and Michelangelo’s dome soars 119 metres above the altar, which means it could accommodate London’s ArcelorMittal Orbit. The vast dimensions explain why people seem to shrink when they enter the church.

There are more than one hundred tombs in St. Peter’s including the Tomb of St. Peter whose remains have been officially identified and located.  Among the other celebrities laid to rest in the Basilica you’ll find 91 popes, St. Ignatius who holds the patronage against throat diseases and for churches in North Africa and the eastern Mediterranean, Holy Roman Emperor Otto II and a former Queen of Sweden. The most recent interment was Pope John Paul II. 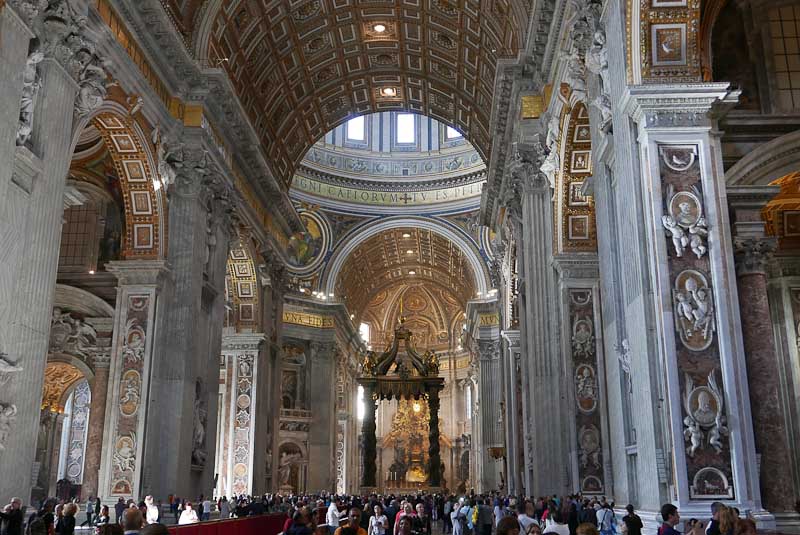 The sheer size of the basilica is daunting.

Michelangelo’s Pietà is regarded one of the most important works of art in the Basilica. The sculpture has been covered by a layer of bulletproof glass, since some vandal attacked it with a hammer in 1972.

Bernini, who also sculpted the four rivers fountain on Piazza Navona, designed a total 140 statues depicting saints for St. Peter’s Basilica. They top the outside colonnade. Each statue is 3.10 metre tall and it took a lot of workers more than 40 years to complete them.  St Peter’s Basilica Org. has a list of which saints can be found where.

The Vatican and St. Peter’s Basilica is guarded by 120 single, Swiss Catholic, beardless males with feathered hats and blue, yellow, orange and red striped uniforms. In spite of the slightly comic outfit the Swiss Guard is a regular army with soldiers trained to protect the Pope. The Swiss Guard was founded in 1506 and new recruits are sworn in on May 6 every year.

An unsuccessful daytrip from FCO Airport