I had read about and seen pictures of the Sicilian salt mills beforehand, but nothing compares to the personal experience of this magic place.


Driving along the coast from Marsala towards Trapani you’ll come to a place, where shimmering heaps of white crystals, red roofed windmills and contained ponds grow in the horizon. It starts out as a mirage and gradually becomes more and more tangible, until you find yourself surrounded by the oldest chemical industry in the world.

From Seawater to Salt

The salt pans near Trapani and Paceco are an absolutely breathtaking nature reserve, where the history, industry, wildlife and scenery complement each other in the most memorable way.

All the ponds differ in size and depth and serve a specific function in relation to the crystallization process.

The windmills look like something out of Don Quixote, but as we learned during our visit to the salt museum many of them are – after recent renovations – still in use. The salt mills consist of a truncated cone base, a red cupola and a wooden framework of six trapezoidal wings to which sails that rotate in the wind are fastened.

Inside the windmill, a complicated system of cogwheels and gears makes it possible to turn the cupola and the sails, exploiting the energy of the wind to grind salt and channel water. 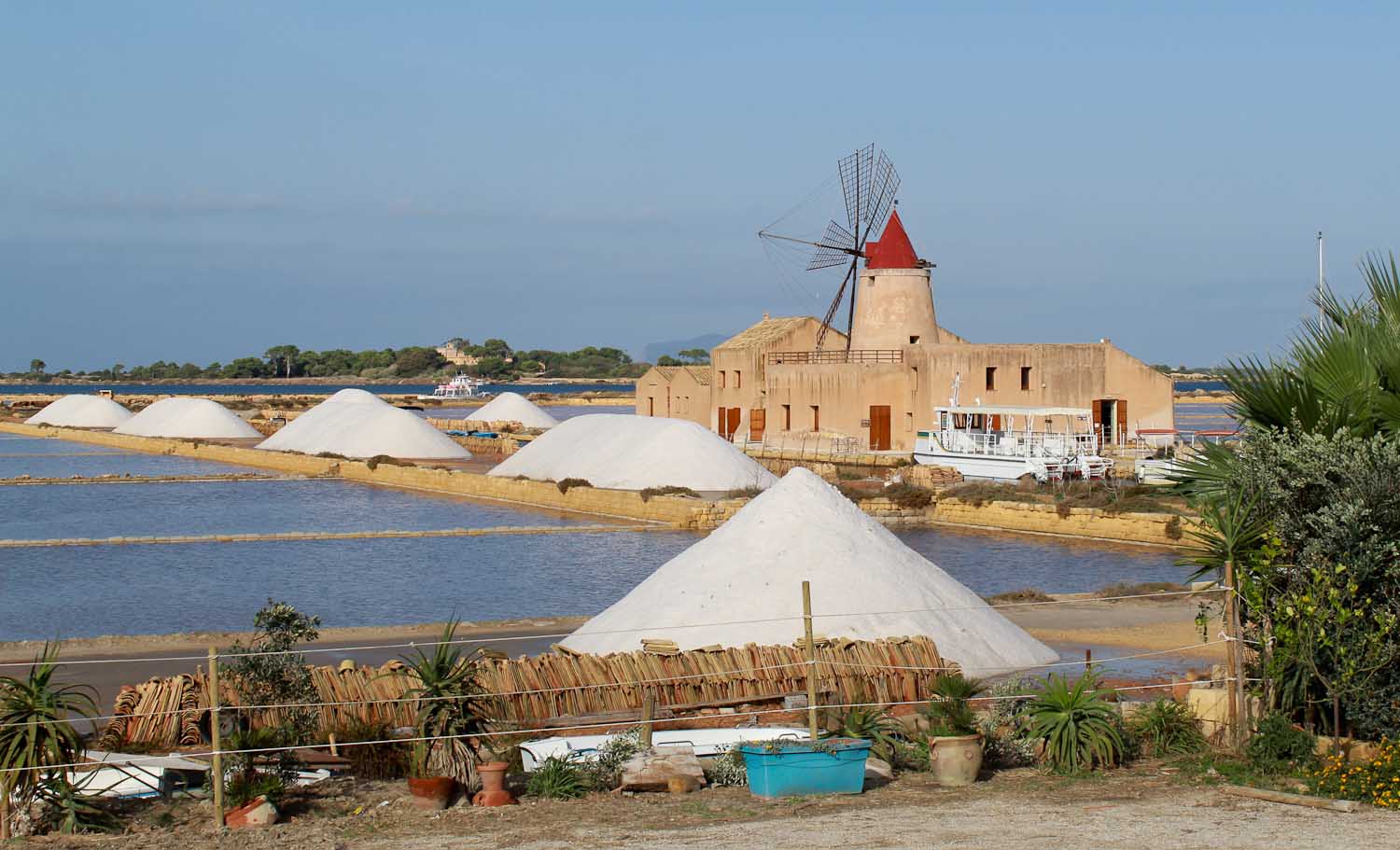 The renovated salt mill now serves as a museum

There has been salt production on Western Sicily for 3.000 years. The area is perfect for the purpose thanks to the high salinity of the Mediterranean Sea and a climate characterized by low precipitation, lots of sun and frequent wind to help evaporation, as originally discovered by the Phoenicians. These sailors, traders and merchants presumably established a colony in Trapani, monopolized the salt and used it to preserve meat and fish such as mackerel and tuna caught in the strait between Trapani and Favignana. The salt could also be used in the tanning process to cure leather.

The Phoenicians were followed by other people and civilizations like Arabs and Normans, who continued to produce and trade salt from Trapani, and the industry grew. Yet the production method remained the same until the end of the 18th century, when the first Sicilian salt mills were introduced. 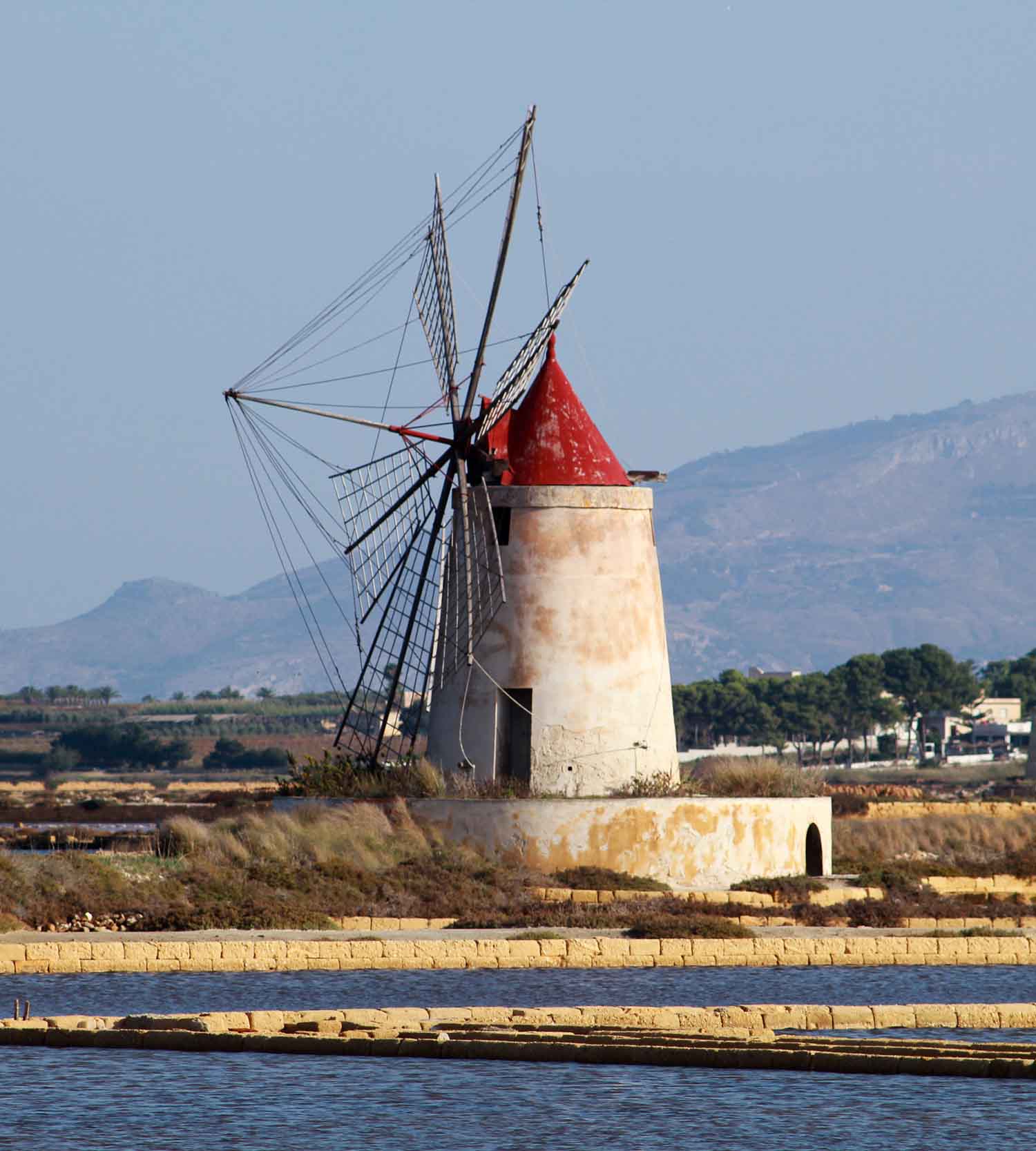 One of the recently restord Sicilian salt mills.

The Mills at Present

Some of the Sicilian salt mills grind salt to powder, while others are shaped like an Archimedes screw and used to transfer water from the salt pans and back into the sea in order to further the evaporation process.

In 1840 a loathed salt tax was abolished, and the salt producers invested in a larger harbour from where large loads of salt, Marsala wine, tuna fish and corals could be shipped to America.

The salt industry in Sicily has declined over the last century, but in 1991 the salt pans near Trapani and Paceco became a protected nature reserve. Walking paths and bicycle routes have been established. And family-run aziendas are still producing salt in Western Sicily.

The harvest takes place in summer, when groups of twenty very well-tanned men and women venture out into the salt pans and collect the dried out sodium cloride. Before then the salt has been turned, cultivated and scooped up in small heaps.

Producing sea salt through evaporation takes lots of hard work and patience. It’s a craft with fixed times and rituals handed down from one generation to the next. A visit to the Sicilian salt mills between Marsala and Trapani gives you an idea of the process and a strong admiration for the zeal and dedication of the salters. 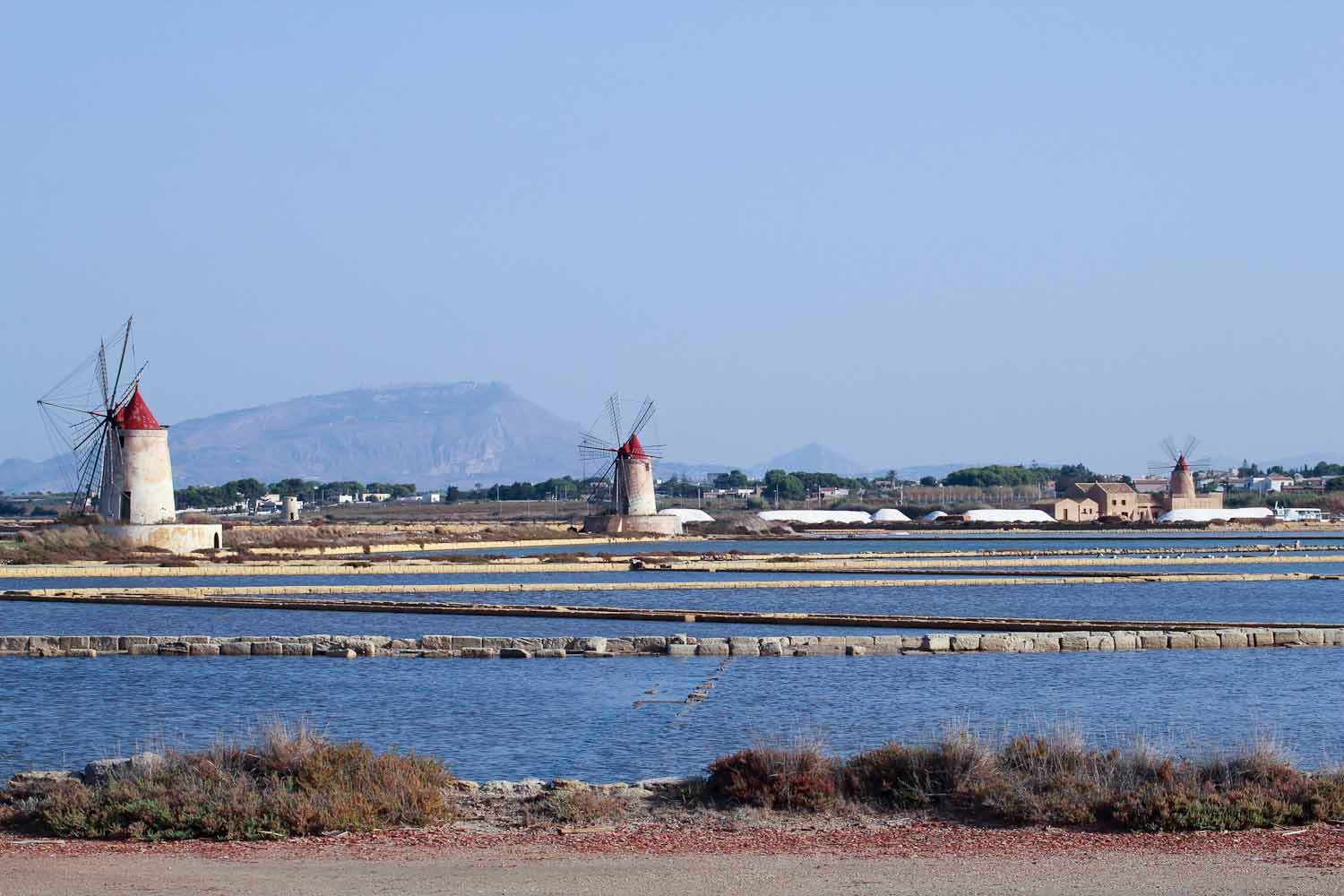 A view over the salt pans intercepted by windmills