The Greek Temples of Selinunte in Sicily

The Greek temples of Selinunte in the province of Trapani is the largest archaeological park in Europe and sometimes described as a Greek Pompeii. A thriving ancient city that survived the sudden death of its inhabitants.


For the casual visitor, the Greek temples of Selinunte appears as a vast jumble of carved stones spread over 270 hectare (640 acres) of macchia mediterranea heath and shrubland on a cliff overlooking the sea.

A once thriving city
Among the debris, seven Doric temples can be identified. Some have been partially rebuilt with steps leading to various levels and lines of massive monolith columns joined at the top by metopes, pediments and friezes, but most figurative elements have been transferred to the archaeological museum in Palermo.

The ruins are the visible remains of a once thriving city. For 219 years from 628 – 409 B.C, Selinunte was one of the richest and most powerful cities in the world with a population of more than 30.000 people living in some 2500 houses. The city was built as an acropolis by a man-made habour and surrounded by a terraced wall with towers and gates. Two main streets divided the urban plan into quarters with residential areas, necropolis and industrial zones interspersed with sanctuaries and places of worship dedicated to forgotten deities. In consequence, the temples are identified by letters and only the best conserved Temple E has an alias as the Temple of Hera due to an inscription on a votive stela.

The bustling city was destroyed in 409 B.C. , when attacked by a Carthaginian army of 100.000 men led by Hannibal Magone. Over a very short period of time, Selinunte was plundered and 16,000 of the male population were massacred while women and children were taken into slavery. From that moment onward Selinunte became a ghost town, and after the Roman era it disappeared from historical accounts.

The rediscovery
It was rediscovered in the 16th century, by the Dominican friar Tommaso Fazello who traveled Sicily on the back of a mule looking for the remains of ancient cities to illustrate his work “De Rebus Siculis”. At that time, the place had lost the name of Selinunte, and become known locally as ‘Terra di Pulichi’ meaning the land of fleas. Since the Middle Ages the place had been used as a quarry of building materials, for instance, some block of an ancient temple were used to renovate a crumbling bridge over the Belice river. The spoliation continued even after King Ferdinand I of the Two Sicilies in 1756 issued a decree which forbade the removal of the stones from the site.

Meanwhile the picturesque and alluring Selinunte had become an archaeologically important stop on the Grand Tour, where European intellectuals and aristocrats knew it as the ‘City of the Gods’.

In 1822 the English architects William Harris and Samuel Angell went to Sicily to look for evidence for the use of polychromy on ancient Greek monuments. They found the ruins of Selinunte buried under a great accumulation of earth and cultivated soil. Without permission the Englishmen started systematic excavations, and in their book Sculptured Metopes Discovered Amongst the Ruins of the Temples of the Ancient City of Selinus in Sicily in the Year 1823 they described the difficulty of moving the enormous blocks which concealed many of the most important architectural element, the thickets and dwarf palms by which the ruins were overgrown were obstacles difficult to surmount in so deserted a spot. The most serious obstacle, however, was the seasonal mal aria that haunted the area, and already in July 1823 William Harris died from fever. (The blog post continues beneath the photo) 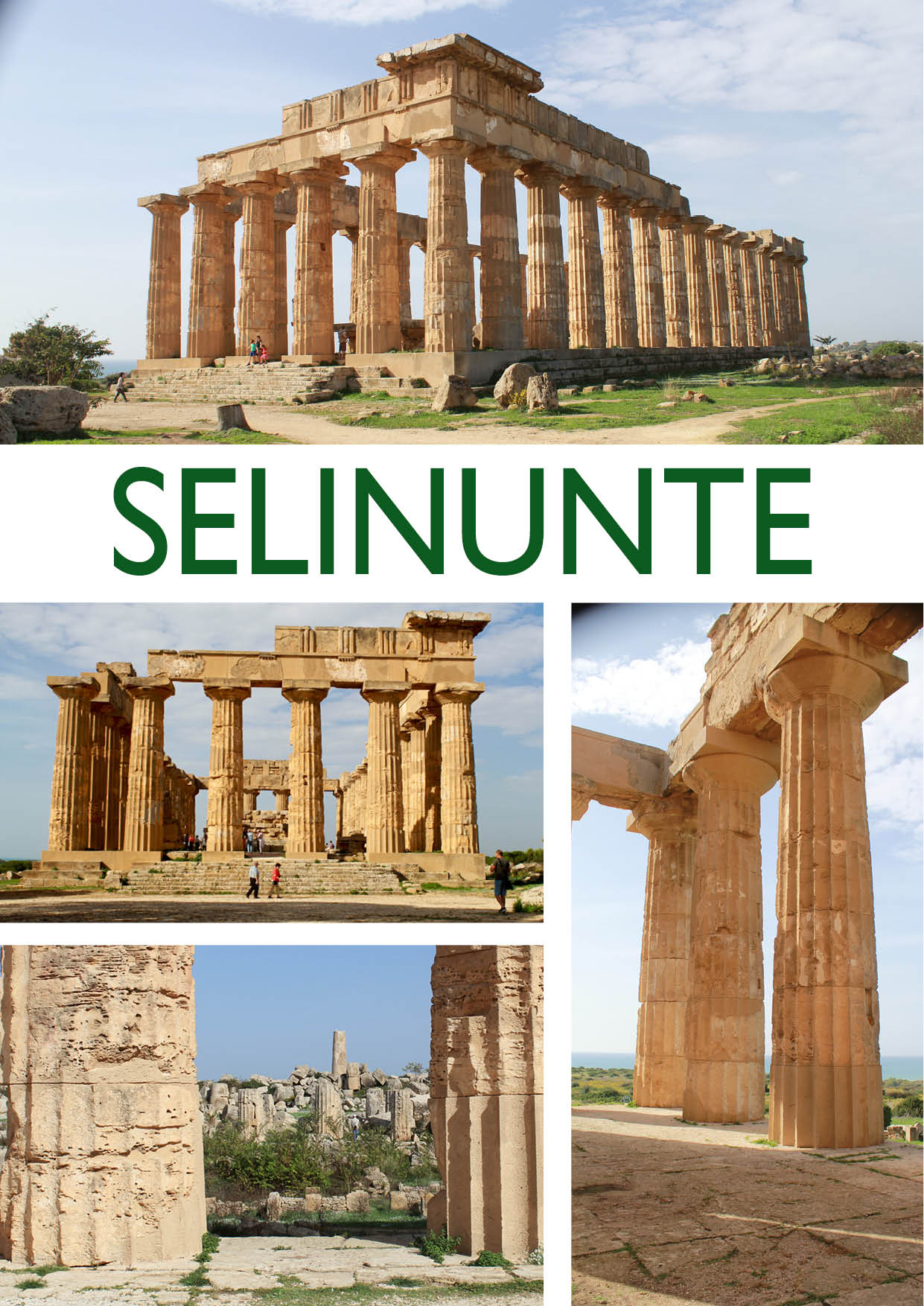 Snapshots of the reconstructed Greek temples of Selinunte in Sicily.

Ancient life frozen in time
After Harris and Angells’ initial excavations, other archaeologists followed and copies of a few of the temples were erected using some of the original building blocks, but to this day only 15% of the 250 acre city – mostly its temples and its acropolis – has survived above ground. In other words, the ruins in Selinunte are still being uncovered, registered, mapped and analysed.

In 2015, an article in the British newspaper Independent reported how the use of new geophysical techniques in Selinunte has led to massive discoveries. Beneath the sand and the earth, archaeologists found the entire metropolis well preserved, and this enabled them to produce a comprehensive plan of what a classical Greek city looked like.

They found half-eaten remains of meals abandoned by the townsfolk as catastrophe engulfed them. The city had a great marketplace and an important man-made harbour. Pottery kilns and workshops complete with pottery-making equipment and the pigments used to paint the pots. The kilns were an important part of Selinunte’s economy, and the citizens used them to produce everything from loom weights, tableware and small statues of gods and goddesses to giant ceramic amphora, roof tiles and ceramic coffins. The pottery was mostly exported or employed as storage containers for the transportation of wheat and olive oil to foreign markets. In return some of the richer houses and temples had glass and bronze artifacts imported from places like Egypt, Turkey, southern France and northern Italy.

A walk in the park
This knowledge, however, is not communicated to visitors in Europe’s largest archaeological park. If there were signs explaining the sights in Selinunte, I didn’t see them, but the magnificent and mysterious structures and building elements speak for themselves. A walk through the archaeological park is awe-inspiring in much the same way as a visit to the grand cathedrals, the tall columns make you feel small and insignificant and the roofless temples offer no relief from the scorching sun.

For this reason it is recommended to schedule visits to Selinunte in the spring when the wildflowers bloom before the hot season and remember to wear your best travel shoes. The distance between temples and excavations amounts to several kilometers, which gives you the choice of risking heat stroke and spending the better part of a day on site and/or hiring a golf cart to drive you around. We chose to devote our time to the reconstructed temples closest to the entrance, which meant that the acropolis had to be enjoyed from a distance.