San Giovanni in Fiore A to Z

Few people outside the Cosenza province in Calabria know San Giovanni in Fiore, which is why I’ve collected an A to Z guide to the town.

San Giovanni in Fiore is one of 34 San Giovanni municipalities in Italy. A town surrounded by mountains and forests with a population of 17,501 people making it the most populated of Italy’s 282 municipalities located in altitudes of more than 1.000 m AMSL. 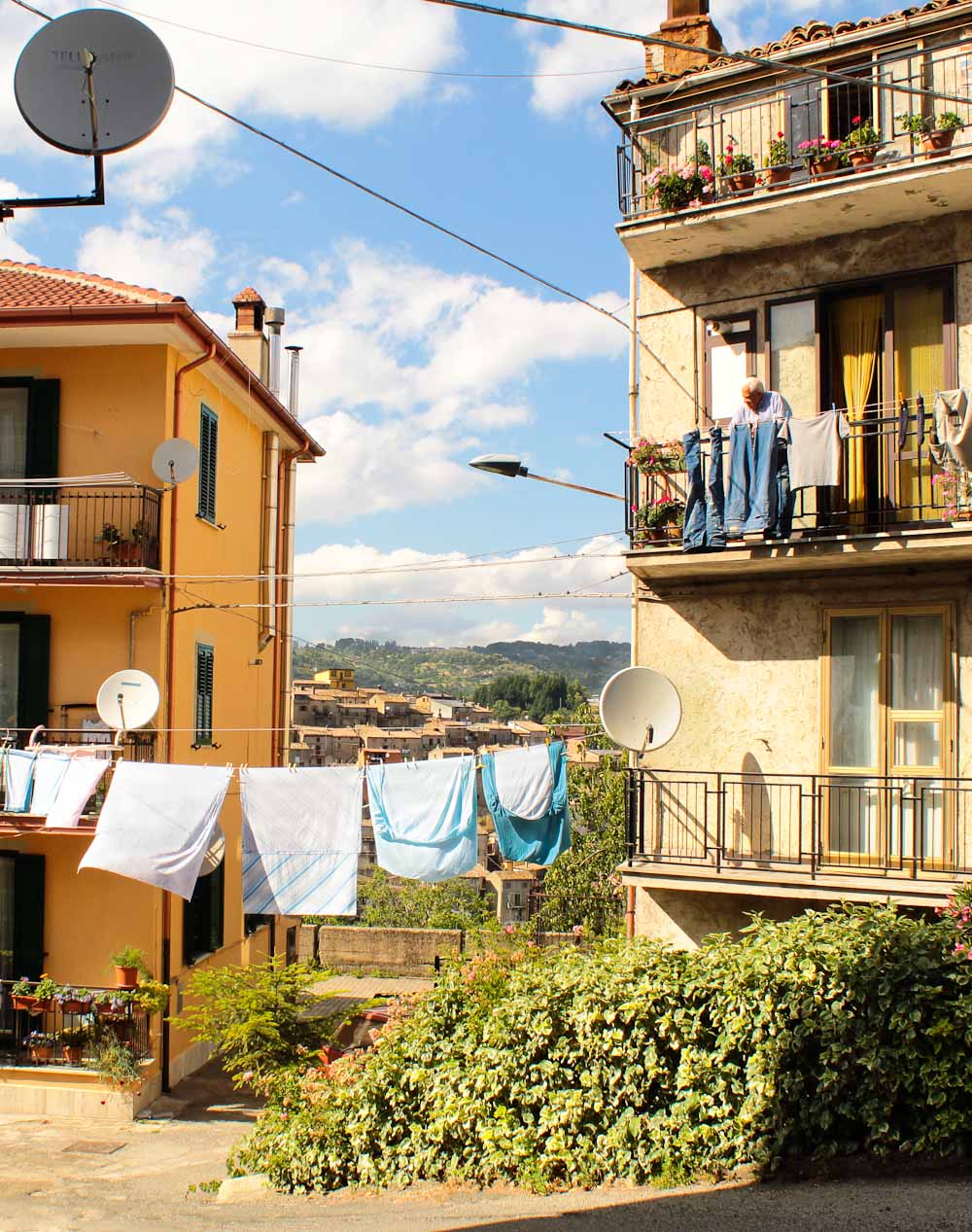 Gorges and great differences in altitude makes it hard to get around in San Giovanni in Fiore.

In the area of San Giovanni in Fiore, there are two artificial lakes called Arvo  and Ampollinno established in the first half of the 20th century in order to generate hydroelectric power.

Attilio and Emilio Bandira were two brothers from Venice   who attempted to make a popular uprising in South Italy in support for a unified Italy. They were caught at the gate of San Giovanni in Fiore in June 1844. They were taken to prison and condemned to death in a martial court under King Ferdinand II.

In february, San Giovanni in Fiore celebrates the annual carnival with street performances of le ‘frassie’. Frassie  are burlesque songs and recitals in dialect satirizing over local and national event. The masters of this particular kind of poetry were local writers Saverio Perri and Pasquale Spina.

The urban centre of San Giovanni in Fiore is located on Monte Difesa at an elevation of 950 to 1.170 m. The city is is located behind Sila Grande on the eastern side of the plateau and opposite a valley which affects the climate and the meteorological conditions.

Located in a mountainous area, San Giovanni in Fiore with 17.501 inhabitants is the most densely populated town in Italy placed with an elevation of more than 1.000 metre

San Giovanni in Fiore originates from the Romanesque Florense Abbey built at the confluence of the valleys Arvo and Neto in 1234. On the facade there is a Gothic style portal with thin bundles of columns and capitals decorated with palmettes and leaves.

The flowers in the name of the town and the monastery were meant as a reference to Nazareth, known as the flower of Galileo, where the coming of Christ was announced. Florense Abbey was meant to announce the coming of the age of the Holy Spirit, a christian community that did not believe in the sacred confines of buildings and monuments, but celebrated the presence of God in tiny roadside chapels out in the open landscape. 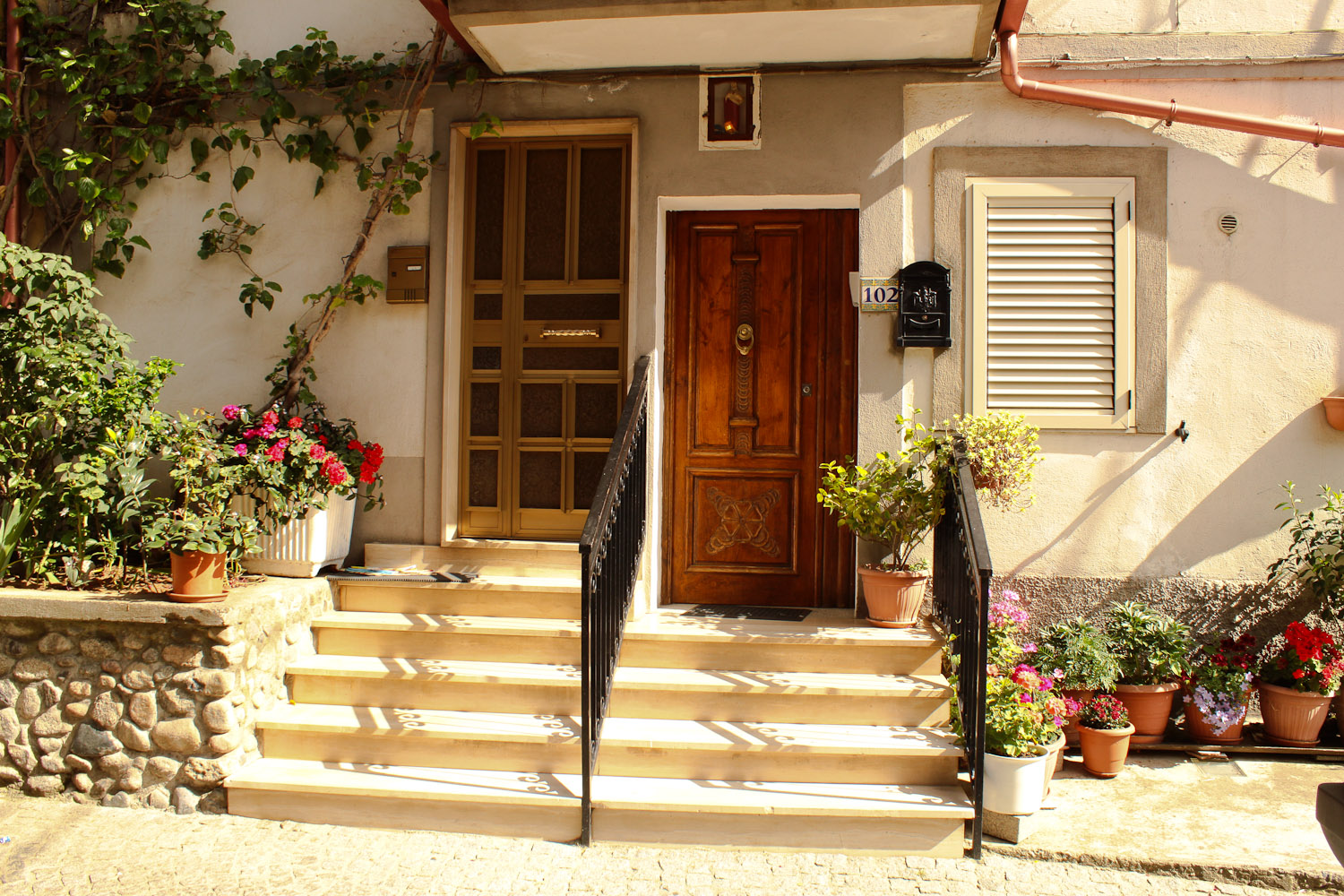 San Giovanni in Fiore lives up to its name with flowers on every doorstep.

The abbey is dedicated to San Giovanni aka St. John the Baptist, the holy hermit with a gift for prophecy and contemplation, who has also given name to the town.

Florense Abbey and the monastic order was founded by the Calabrian monk Joachim of Fiore (c. 1135 – 30 March 1202). Joachim was a greatly popular priest who retired first to the hermitage of Pietralata, then founded the Abbey of Fiore (Flora), which became the center of a new and stricter branch of the Cistercian order. By the main altar in the Abbey of San Giovanni in Fiore there is a crypt with an urn containing the remains of Joachim of Fiore.

Laricio is the Italian name of the larch pine, a subspecies of the pine tree pinus nigra only found in Calabria, Sicily and Corsica. Larch pines are particularly widespread throughout the Silas plateau, where you can find dense forests of 45 m tall trunks forming a perfect, natural colonnade. The larch pine is depicted in San Giovanni in Fiore’s coat of arms.

San Giovanni in Fiore has two regional museums, both housed in the Florense Abbey. One is an ethnographic collection focusing on the traditions of the area through an exhibition of utensils and dresses in the Museo demologico dell’economia, del lavoro e della storia sociale silana, while the other is dedicated to the photography of Saverio Marra.

Nzuddha are traditional honey biscuits shaped like doves or fish. Other sweet specialties from San Giovanni in Fiore include pitta ‘mpigliata rolls with a filling of raisins and nuts, the deep fried turdilli and the doughnut like zeppole.

Potatoes are not just potatoes in San Giovanni di Fiore. Locally grown spuds are known as the Queen of Sila, and they have just been granted IGP status. 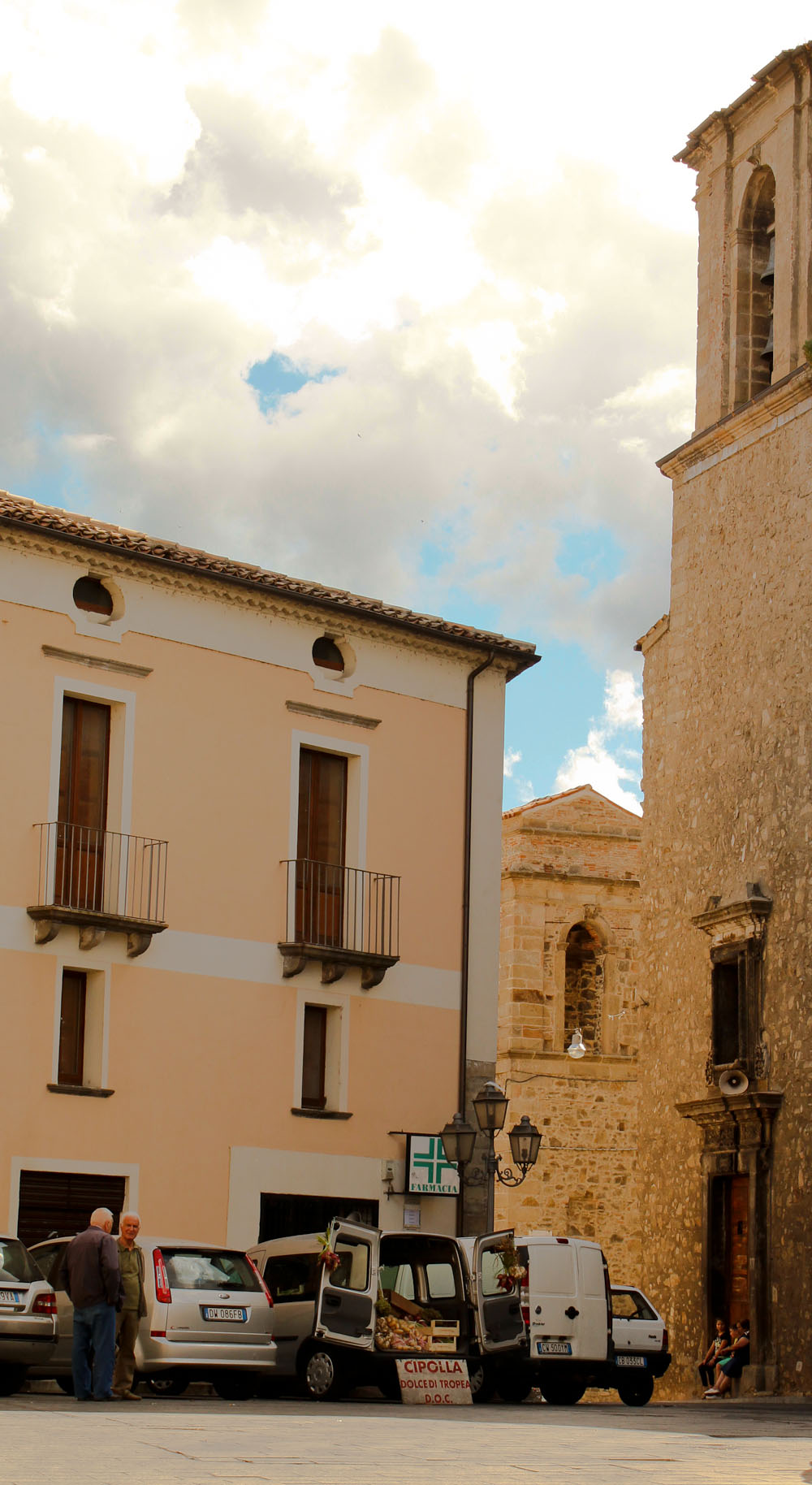 ‘Ù ritùartu‘ is the traditional dress worn by the women of San Giovanni in Fiore. The black costume, which has a full skirt and a white embroidered blouse under a sleeved cape dates back to the 17th century, when it was used as an emblem of austerity and prudence. It was worn by young girls from the age of 15 to the time of marriage.

San Giovanni in Fiore is the administrative seat of the Silas national park. A mountainous plateau with large forests, lakes and natural waterways that occupies part of the provinces Crotone, Cosenza and Catanzaro. Silas national park claims to have the cleanest air in Europe. The highest mountain is Mt. Botte Donato (1,928m).

The typical dish in San Giovanni in Fiore is a kind of stew called the ‘tiella’,  where local potatoes are cooked with baccala, zucchini or other vegetables such as mushrooms, aubergine or dried tomatoes.

Local crafts include ‘vimini’ or wickerwork made with vines and weaved rugs using orientally inspired techniques and patterns. 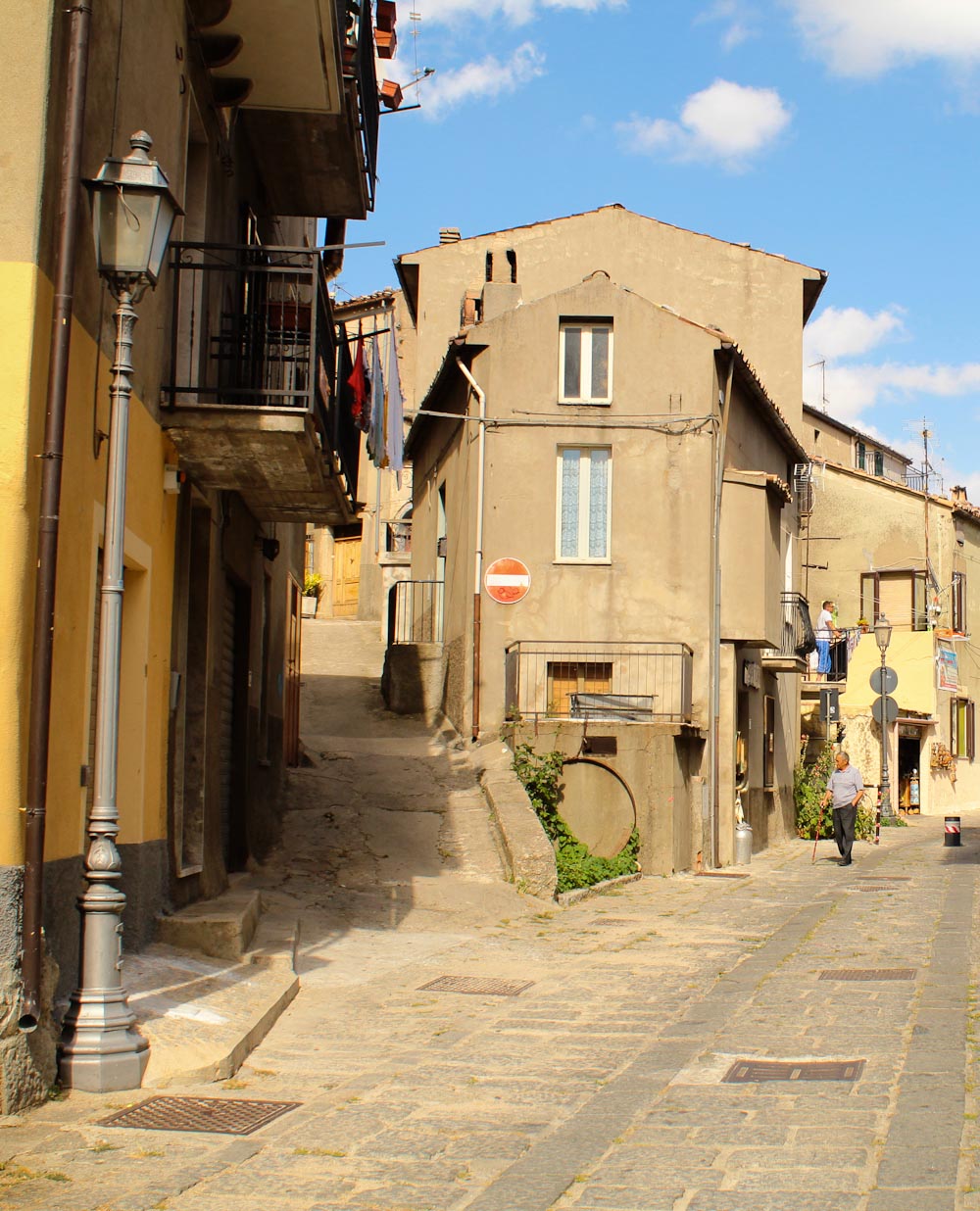 The centro storico of San Giovanni in Fiore

The Silas area has rich wildlife with a number of mammals such as wild boars, wolves, weasels, roes, deer, martens, foxes, otters, wild cats and squirrels in addition to the rich and variegated bird life.

‘U zugghi’ is a traditional song used to greet friends and loved ones, before they are invited into the house for a Christmas meal. On Christmas night the locals also light bonfires to provide some warmth for the freezing Jesus child.

Maps were disabled by the visitor on this site. Click to open the map in a new window.
3 replies