It’s supposed to have looked exactly like the Greek acropolis with a citadel and hill for the Gods, but today Agrigento on the south coast of Sicily resembles any other Italian city with houses decorated with satellite dishes, streets lined with oleander trees and a Golden Point chain store in the shopping area around Piazzale Aldo Moro. Still, the past is just around the corner.

Walk towards the southeast and you’ll come to Valle dei Templi – a ridge with the remains of seven Doric temples from Magna Grecia. I’ve never seen so many carved columns, architraves and friezes in the one place, and the sight left me in puzzled indifference, until I read up on the history.

The practical use of prisoners

The gigantic temples were built over a period of 50 years after the Battle of Himera (480 BC), where Greek settlers won dominion of west Sicily from the Carthaginians from Tunis. The victory gave the Greeks innumerable prisoners, who became slaves and labourers in a building boom of incredible dimensions. Nine temples were erected outside Agrigento, before the Carthaginians returned in 406 BC and found a population weakened by wealth, prosperity and internal strife.

An almost completely reconstructed temple seen from a distance.

Walking around the ruins I’m surprised to note the straight, no-nonsense geometry of these houses for Juno, Concordia, Asclepius, Heracles, Dioscuri and Vulcan. There’s no apparent place for worship and no religious paraphernalia. The Greeks were rational people, and though there have been some excesses in the colour and relief, the temples stand in frozen harmony compared to the later Christian places of worship.

Another striking feature is the size and closeness of the columns. The ancient Greeks didn’t know how to construct arches, so the pillars had to be placed near each other to prevent the lintel from caving in.

Among the ancient stone jumble in Agrigento there are also a sleeping giant. 2500 years ago these 8 metre tall figures were placed between the columns to commemorate the battles of Zeus, and according to legend the Roman magistrate Gaius Verres (ca. 120 BC – 43 BC) stole an Apollo statue on his first visit in Agrigento. He and his men came back later for a very beautiful statue of Hercules, but the statue was so big that it could not be moved, and after trying for more than an hour Verres and his men were attacked with stones by guards from Agrigento wanting to protect the local heritage.
Since then the Valley of Temples has survived looting and earthquakes, but the ruins can still be seen along with the immoveable fallen giant. The weather worn stone carvings lying among almonds and olive trees on the hill side are, however, a tufi copy. The original has taken shelter in the Agrigento’s archeological museum. 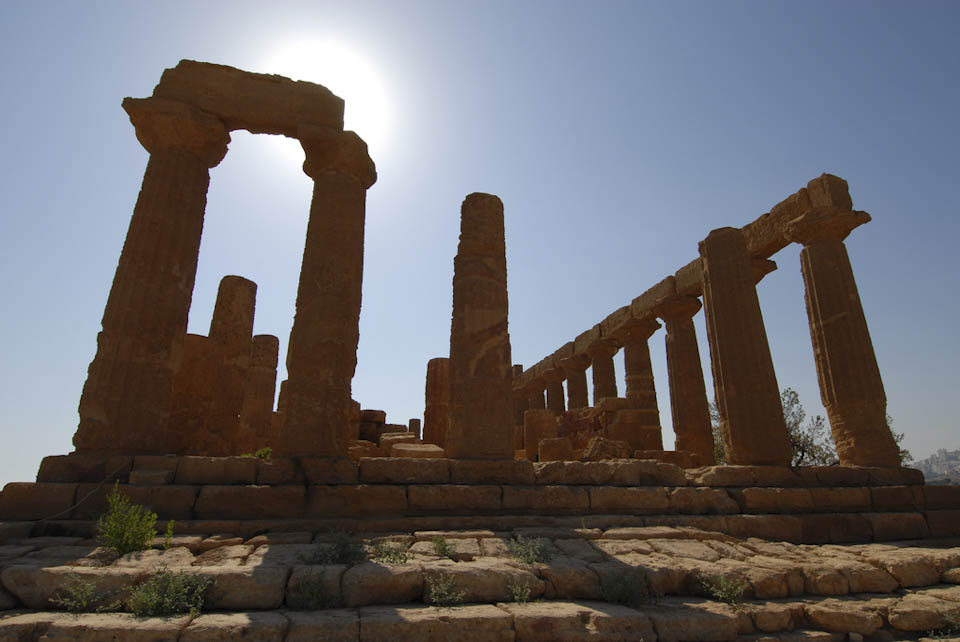 A Palermo market taste of the Orient