There are 127 columns of Istrian stone in Senigalllia’s Portici Ercolani, and they are all alike. Yet one column outside the Caffe Portici has been the subject of a highly unlikely coincidence.


Today Senigallia may seem like a holiday town complete with hotels, restaurants, campsites, a seaside promenade and a pleasure pier, but for centuries before that it was a thriving trading post. Back in the 1200s, Senigallia became host to an annual trade fair on the Adriatic coast of Italy, called Fiera della Maddalena.

At that time nearby Ancona was the main port in the area, but arriving ships brought along contagious diseases, and to minimize the risk of spreading it was decided to move the international trade fair 30 km further up the coast. The fair attracted merchants from all over Italy, Europe, North Africa and the Middle East, and their numbers and presence grew over time.

An international trade fair
According to Wikipedia traded goods comprised iron tools and weapons from Brescia, fabric, used clothes and paintings from Rome, leather and drugs from Trieste and Venice, soap, oil and wine from Puglia, jewellery from Jesi, ceramics from Romagna, silk umbrellas from Rimini, earthenware from Abruzzo and Ascoli, hides and silk from Bologna, hemp and ropes from Faenza, wood and tobacco from Fiume in Croatia, musical instruments from Bavaria, crystals from Bohemia, glass and books from Venice, toys from Nurnberg, swiss watches, salted fish and pork sausages from Istria and Sicily, shoes, boots and slippers from Padua, silk from factories in Lyon, coats from Ancona, and bricks from Marche.

Senigallia had become an international hotspot, and the local authorities did their best to ensure a steady flow of merchants and commercial traffic. For instance tribunals were established to resolve trade disputes within three days so as not to delay the departure of travellers. By the 18th century, countries such as Denmark, England, Austria, Belgium, Sweden and Turkey had established consulates in Senigalllia to protect the commercial interests of their merchants, and each nationality was assigned areas and shops for rent. 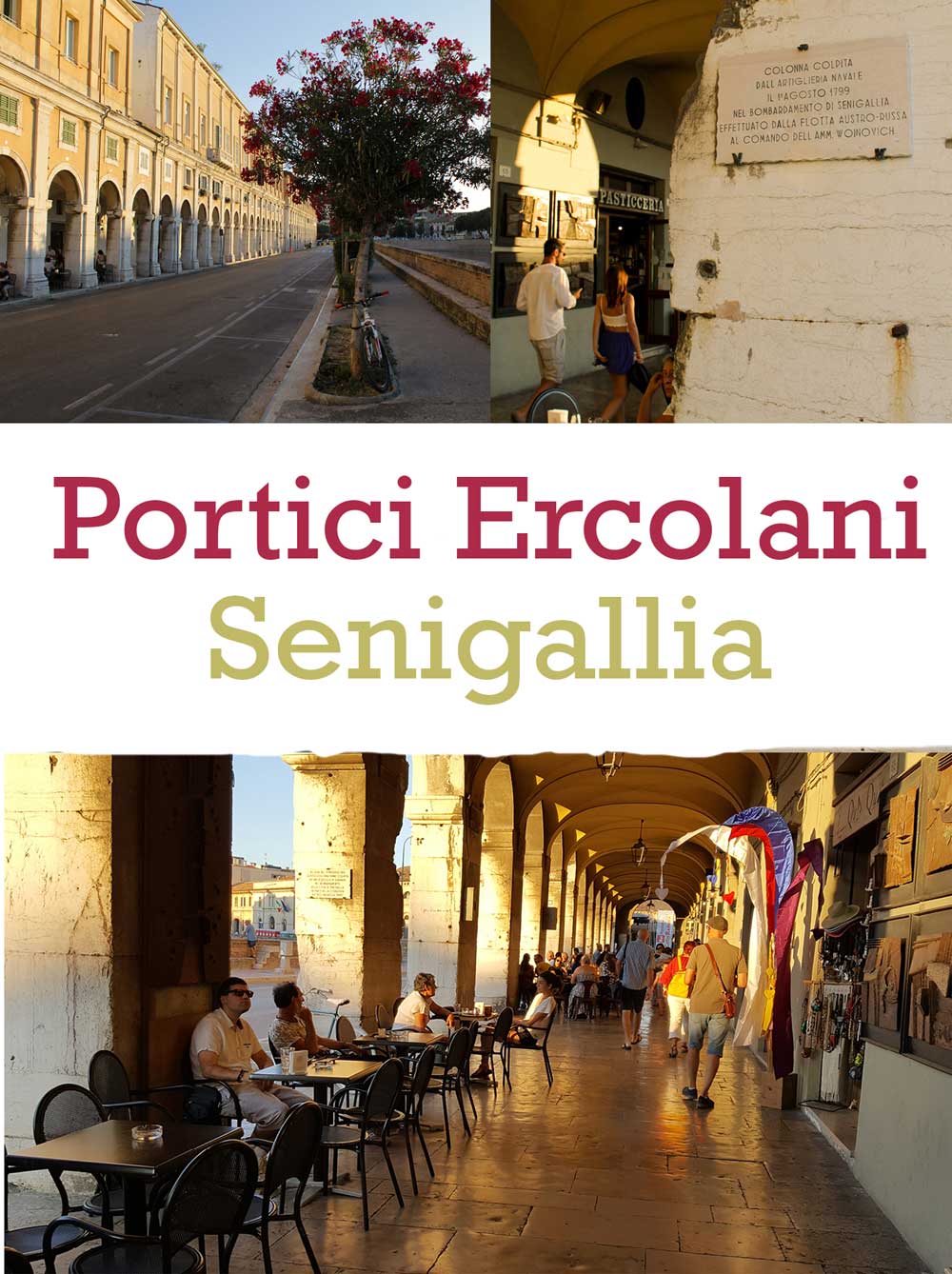 The Portici Erconali were originally built to improve and enlarge the urban structure.

Portici Ercolani and the twice hit column
At that time the Fiera della Maddalena could no longer be contained within the city walls, and it was decided to improve and enlarge the urban structure by creating an arcade along the river Misa. Thus in 1746 the first two stretches of the Portici Ercolani became a reality, a few years before a commercial crisis caused a sharp decline in trade fair volumes.

In 1799 during the War of the Second Coalition, Napoleon’s troops occupied Senigallia, but they withdrew when the city was overtaken by Austrian, Russian and Turkish forces. To intimidate those who had supported the French administration, the city was bombed from the sea and one of the columns in the Portici Ercolani took a severe blow. You can still see the marks on the stone beside a plaque with the inscription:

Still, the column was not just hit once. In 1915 during the First World War the Austro-Hungarian imperial navy carried out a lightning attack on the cities and the transport lines of the Italian Adriatic coast in response to Italy’s declaration of war on May 23. The attack caught the Italians unprepared and they were unable to issue an effective response. The main target was Ancona and the surrounding cities and in Senigallia the SMS Zrinyi, with two other torpedo ships destroyed a train and damaged the railway station and a bridge. Shrapnel from a grenade further damaged the exact same column in the Portici Ercolani that had already been hit during the Napoleon War, so when you walk around the column, there is a second commemorative plaque saying:

Fortunately the twice damaged column is still standing, so you can still wonder at the coincidence or its weird attraction to shellfire. And if you want to experience the atmosphere of the Fiera della Maddalena you could visit the Portici Ercolani on Thursday mornings, when local vendors at the weekly market display and sell their goods under the arches.