Pisa’s Tiny Church by the River

There’s so much to explore in Pisa apart from the Leaning Tower and the other sights on Piazza dei Miracoli. Take a walk along the Arno, for instance, until you stumble over Pisa’s tiny church by the river.

To me the epitome of Tuscany can be found on a walk along the Arno. The warm sienna, umbra and ochre colours of the houses along the river banks serve as artificial, happiness inducing sunlight, and behind the facades there are museums, convents and curious historical incidents.

While strolling along the Lungarno Mediceo, I was surprised to find the pavement blocked by a tiny church with an extraordinarily rich Gothic ornamentation. The white marble and intricate decorations are completely at odds with the surroundings, it looks as if some giants have been playing around with a toy church and forgotten to take it with them.


As it turns out Santa Maria della Spina hasn’t always been sitting on the pavement. The tiny church was originally erected in 1230 as a prayer hall for sailors directly by the river, but in 1871 it was dismantled and rebuilt on a higher level to protect it from damp and flooding with the high tides. The thorn (Spina) in the name refers to a holy relic from Christ’s crown of thorns brought to Pisa in 1333, but this has later been moved to the Chiesa di Santa Chiara. In other words, there is not a lot to see inside the church, which is nice to know considering that the doors are mostly locked. 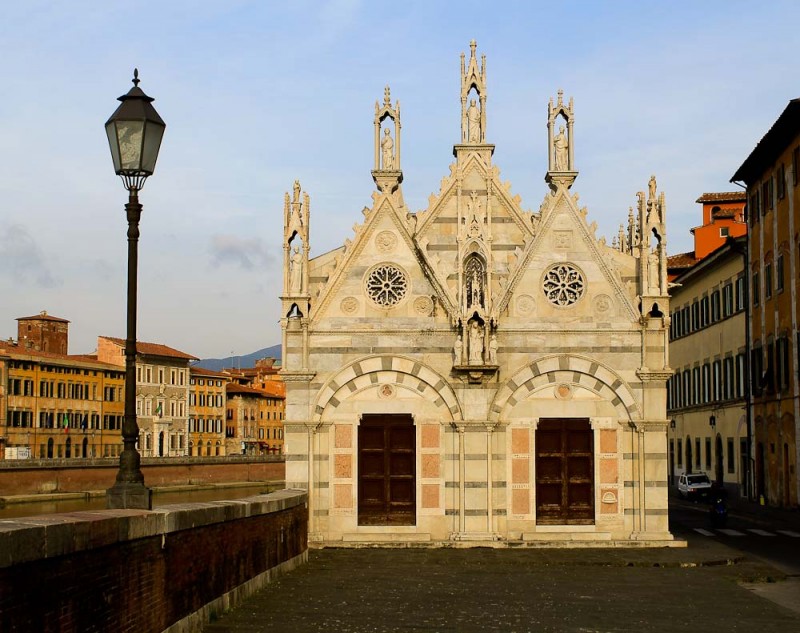 The real name of Pisa’s tiny church by the river is Santa Maria della Spina due to the former presence of a holy relic from Christ’s crown of thorns.

The exterior, however, is magnificent. Santa Maria della Spina is one of the most outstanding Gothic edifices in Europe with numerous sculptures, pediments, turrets and pointed ends. The centerpiece on the western façade is a statue of Madonna with Child attributed to Giovanni Pisano and on the side facing the street it is possible to identify the 13 statues of the Apostles.

Pisa’s tiny church by the river is in many ways as miraculous as the world famous edifices on Piazza dei Miracoli. And there are no tourist queues and weird poses to disturb the admiration of building.