In south Italy, it’s not unusual to see a Ferrari or a BMW surrounded by a herd of sheep or goats. Shepherding is a contemporary vocation that remains unaffected by progress and modern technology.

A Way to Make a Living

What puzzles me, especially, is the fact that shepherds exist after a century that has seen the invention of central heating and the electronic cuckoo clock and that they can still make a living wage by tending to the animals. Even though I sometimes find the price of lamb chops rather steep, I don’t believe I’m financing a sheepsitter. And the livestock is constantly trespassing on private property, so I doubt the shepherds are publicly employed to tend commons or maquis shrubland. The most likely explanation is that privately owned  sheep and goats are herded to different pastures and free fodder as a local transhumance.

Another source of wonder is the position of the shepherd. After all, herding sheep is not just one of the world’s oldest occupations, but also a universal symbol of God, Jesus, several prophets and most priests, who all have flocks to be tended along with the wisdom and moral integrity to work as spiritual guides. For eons the pastoral tradition and shepherds have been eulogized by poets, writers, painters and sculptors. They are seen as true sons of nature, uncorrupted by the temptations of the city. As great thinkers meditating under the stars.

Still, the shepherds I’ve come across, don’t seem as if they are experiencing perfect zen, and they are frequently inhaling nature through a Marlboro filter. Yet they walk around for hours, while their sheep leave a trace of droppings and feast on a diet of weeds, waste, crops, prickly pears and rusty iron fences. And that leaves plenty of time for contemplation. 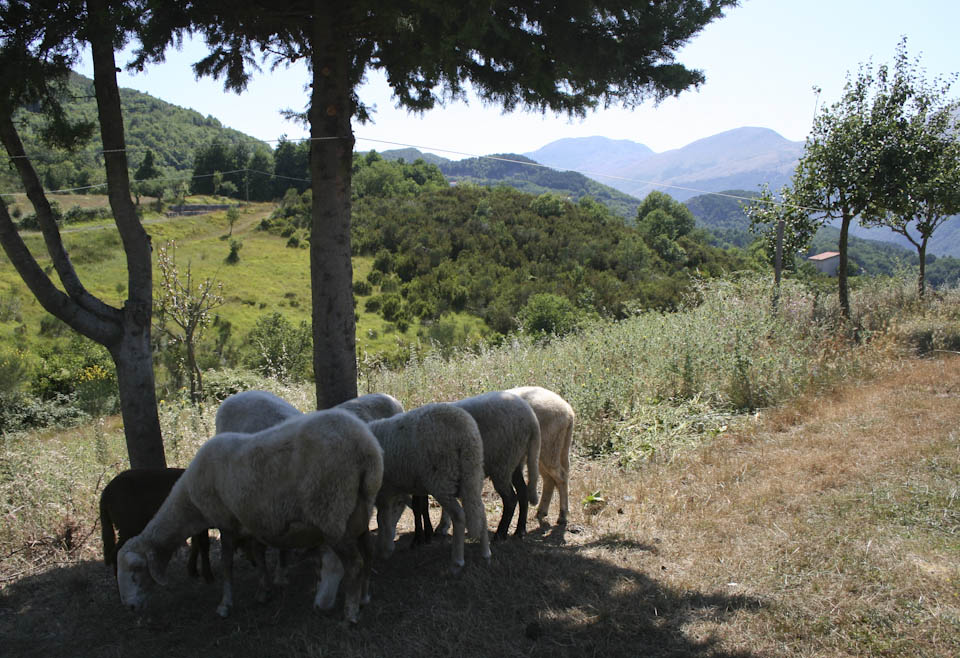 Grazing sheep on a hillside in Calabria