The painted houses of Pordenone

There are frescoed houses on both sides of the Alps, but few cities have more painted houses than Pordenone in Friuli Venezia Giulia.


The historic center of Pordenone follows Corso Vittorio Emanuele II, where colonnaded porticoes of antique houses line a pedestrianized shopping area. But the main attraction can only be seen, if you gaze upwards. The renaissance houses of Pordenone are decorated with frescoes and behind layers of peeling plaster you can still glimpse patches or fragments of geometric patterns, mythological creatures, allegorical scenes and/or the coat of arms of noble families, particularly the red and white coats of arms of the Habsburg dynasty.

The oldest of these buildings date back to the 14th century, when Pordenone gained status as a city thanks to flourishing trade on the Noncello river. City-dwellings were originally built in wood, but in 1318 a devastating fire destroyed the urban core, and it was subsequently decided that the town should be rebuilt with stones.

The richest families settled in the main street – today’s Corso Vittorio Emanuele II – where they built houses with tile roofs and frescoed facades, turning the walls into a kind of tapestry. This ornamental custom was a sign of status and economic prosperity, influenced by Venetian and Byzantine traditions.
Tracing the history of these frescoes is not easy. Information regarding the buildings is fragmented and sparse due to changes of ownership and structural changes in the buildings over time. It would be more accurate to regard the mural work on the houses of Pordenone as a result of centuries of decorative interventions. 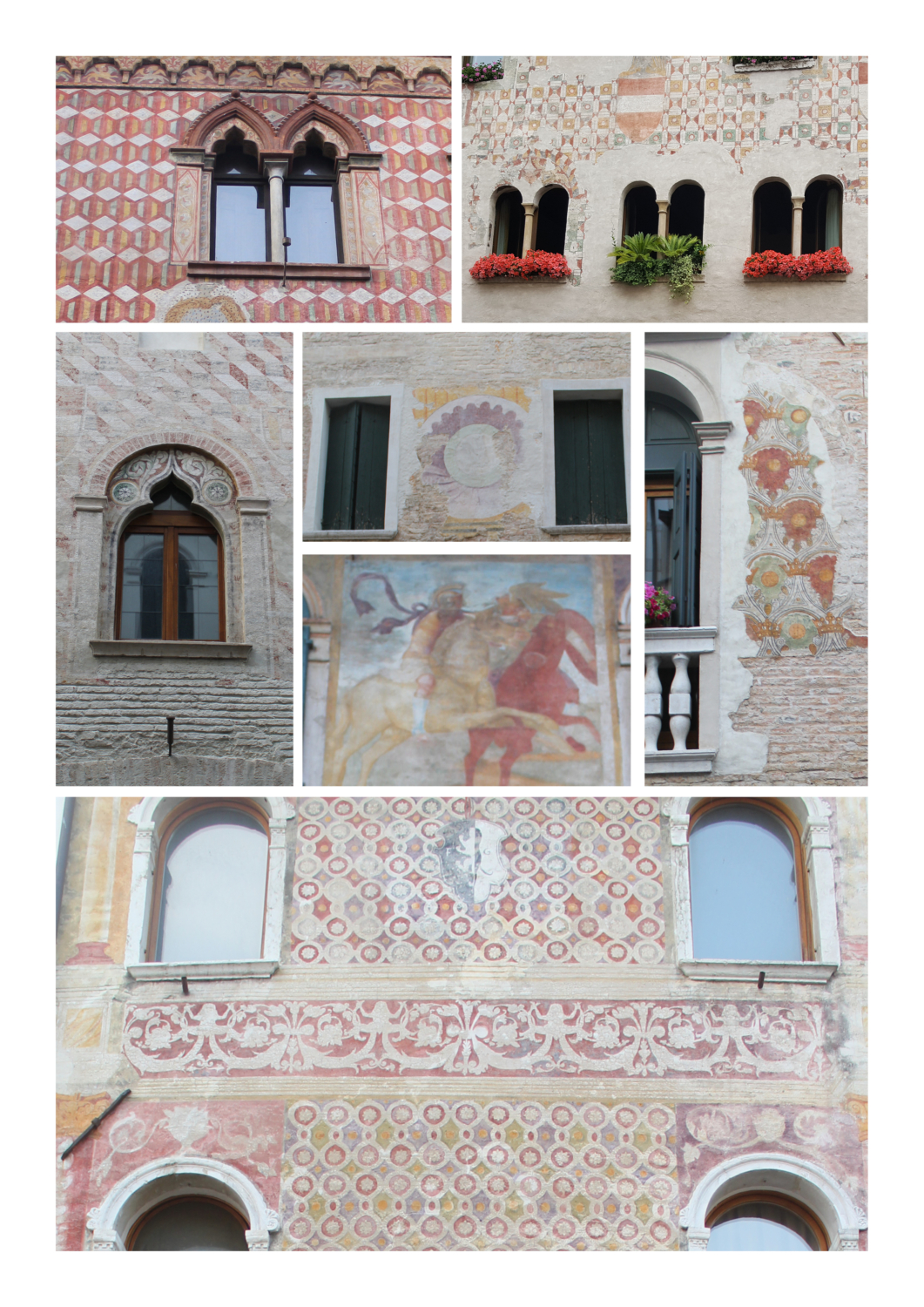 One of the first frescoed buildings encountered on the right after leaving Piazetta Cavour is the 14th-century Simoni house with floral and fruit motifs in the lower eaves, a civic coat of arms between two Gothic windows, and a well preserved faux brick decoration. This technique belongs to the oldest part of wall frescoes. Further down the street to the left there is a house front completely decorated by geometric shapes and colours. This building also dates back to the 14th century. It was used to house two factories, each of which had a portico with round arches.

The Palazzo Popaite – Torriani – Policreti consists of two units, one from the 14th and one from the 18th century. On the facade on the right there is a large fresco with two coats of arms representing the families who lived there. There is the rising moon of the Popaite family and the talking tower of the Torriani. On the older left facade there are traces of fake brick frescoes and polychrome motifs of stylized plants surrounding the original windows. Behind the house there is a large courtyard bordered by the ancient city walls.

On Palazzo Cortona – Ovio – Floreano there are fragments of frescoes with illusionistic ornaments, elegant bundles and phytomorphic motifs. The stone capitals carrying the portico are carved with crests and the frescoed head of a putto.

The restoration of Palazzo Ragagnin – Falcomer revealed vast pieces of decorations dating back to different eras. There is a coat of arms showing a rampant lion with a twisted head and grotesque elements under an arch with fake brick decorations. Most visible is the House of Austria’s coats of arms.

Casa Gregoris – Bassana is completely covered by a fake damask tapestry in strong chromatic colours. The centrepiece is the Gregori’s coat of arms and three friezes depicting masks, dolphins, mermaids, tritons and hippogriffs.

On the second floor of Palazzo Mantica there is a fighting scene between two knights killing a rooster designed by Il Pordenone . In the string course the Mantica coat of arms has been identified along with images of the imperial eagle and the lion.

The Mantica – Cattaneo building was originally two buildings from the 14th and 15th century. The year 1559 is written in the frescoes of the eaves and there is a scene of Milone being torn apart by a lion. The frescoes could be painted by Antonio Sacchiense, nephew of the great Pordenone. In 1797 the young Napoleon Bonaparte stayed in this palace for one night on his way to the victorious battles in Friuli

The facade of Palazzo de Rubeis is completely covered with a polychrome pattern of tetrahedra and hexahedron figures in bright red, green and ochre colours. The pattern is interrupted by numerous windows of different architectural styles and the depiction of human effigies and fantastic animals taken from medieval bestiaries.

Palazzo Polacco – Barbarich – Scaramuzza is of certain 14th century origin, though is was restructured in the 1500s. The facade has friezes with floral motifs alternating with racemes and fake brick decorations.
The front of Casa dei Capitani on the corner of Via del Mercato is covered by a fake tapestry with three shield-shaped coats of arms. By the chimney there is a grotesque Telamone figure.

For a full account in Italian of all the painted houses along Corso Vittorio Emanuele in Pordenone visit the local administration’s website.