Greek ruins in a sea of flowers

A once flourishing town in Magna Grecia disappeared for centuries like some Italian Angkor-Wat before it was rediscovered. Now the three Paestum temples mark a quietly charming UNESCO World Heritage site.

In pre-Roman times Paestum was a wealthy logistic hub, where trade goods were transferred from ship to land transportation to avoid the long and dangerous passage through the Strait of Messina. People lived in comparative luxury in a town with covered arcades, an entertainment arena, and three temples to ensure their spiritual well-being, before the town was swallowed by a swamp and taken over by malaria and mosquitoes. From the 9th to the 18th century, Paestum was all but forgotten until some road builder happened to plough right through the ruins. This led to a partial excavation in the flatlands between the mountains and the Tyrrhenian Sea.

The first thing I noticed when we came to Paestum a hot summer day was not so much the three incredibly well-preserve Doric temples, dating back to the first half of the 6th century BC. They looked more or less as described and painted by traveling writers and artists in the 19th century. But I hadn’t expected to see the old ruins surrounded by sun burned grasses, crumbling foundations and flowering oleanders. 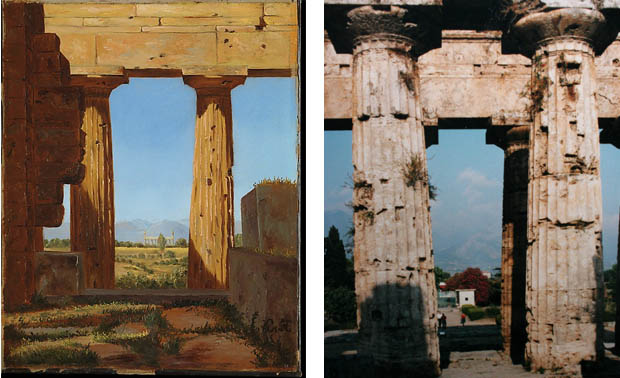 My photograph of the Columns of the Temple of Neptune at Paestum (right) beside the same view painted by Danish artist Constantin Hansen in 1838.

Both because there is a strong contrast between the arid undergrowth and the lush proliferating bushes, and because the place was more or less deserted. Apart from a few souvenir shops outside the ancient town walls there were no queues and tourist busses. We – and a population of fat lizards – had the temples to ourselves, and the flowers gave the place a tranquil beauty and serenity, I felt lucky to experience.

The Roses of Paestum

The atmosphere was precisely as described by travelers from by-gone centuries. According to HV Morton, Horat, Ovid and Martial all mentioned the flowers and especially the twice flowering roses of Paestum.

Henry Swinbourne, who was one of the first foreigners to visit Paestum (and Crotone) after it had been recovered, writes about a wild, deeply red rose with a strong fragrance, though he didn’t actually see it. And Norman Douglas thought he had found the real rose of Paestum and tried to transplant his pickled specimens to English soil. He didn’t succeed, and the roses haven’t been seen since, but oleanders make a nice if unfragrant substitute, so that Paestum has retained its spirit through the ages.

Maps were disabled by the visitor on this site. Click to open the map in a new window.
19 replies