The origin of blue jeans:

How the fabric of Genoa conquered the world

Once ‘bleu de Gênes’ was a fabric used for sail making around the ancient harbour of Genoa. This was the origin of blue jeans that crossed the Atlantic and became common property.

Walking along the ancient harbour of Genoa, there are blue jeans everywhere. Local workers, tourists and refugees are all dressed in indigo coloured cotton trousers. In most cases these trousers have been imported from the US, and we tend to regard them as a piece of Americana like the banjo, bolo ties and bluegrass music. But blue jeans did in fact originate in Genoa. 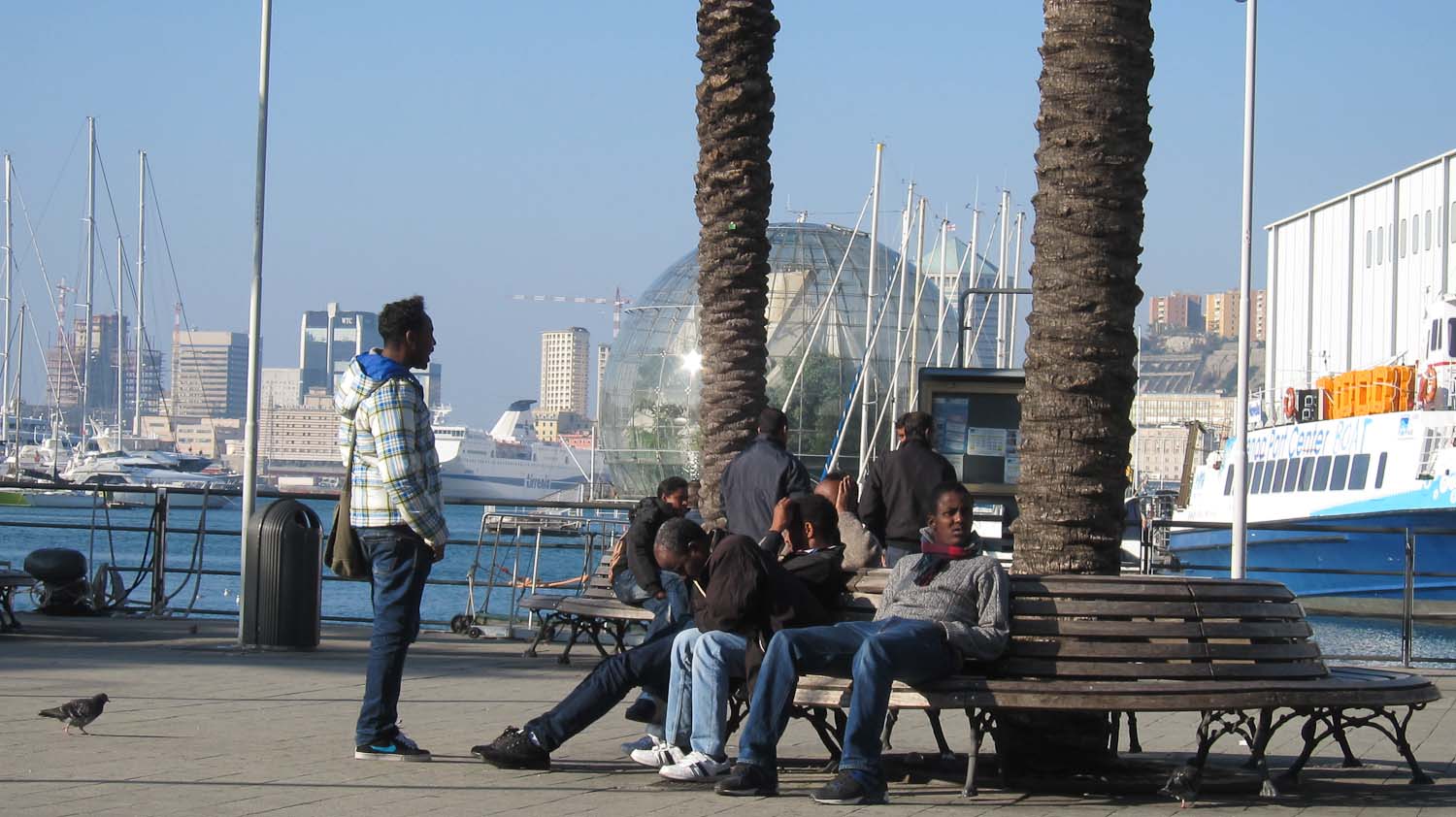 I was reminded of this fact by a three-masted galleon docked beside the modern yachts that have taken over the old port of Genoa.

Back in the 15th century, shipbuilders and merchants in Genoa used a cheap, coarse and strong, cross weaved type of cotton to make sails and protect their goods. This kind of fabric was produced in the French city of Nimes, resulting in the name ‘denim’, and used in combination with moleskin. In Genoa, similar textiles were dyed blue by indigo traded with India. Their use extended to work clothes, and they were exported under the French name ‘bleu de Gênes’ that became blue jeans when translated to English.

In the 1800s some anonymous merchant had the brilliant idea of sending a shipment of blue work pants to America. These jeans were designed with lots of strong pockets as requested by gold diggers. The jeans were discovered by Levi Strauss and Jacob Davies in 1873, and they patented the modern, mass-produced prototype with two pockets in front and one on the back with copper rivets.

Denim work pants acquired fame through cowboy movies, and after WWII they became increasingly popular among young people. In Italy, however, blue jeans were actively banned by work managers and headmasters for most of the 20th century. It wasn’t until the founder of Fiat car manufacturing, Gianni Agnelli, started wearing jeans in public, they became generally acceptable. 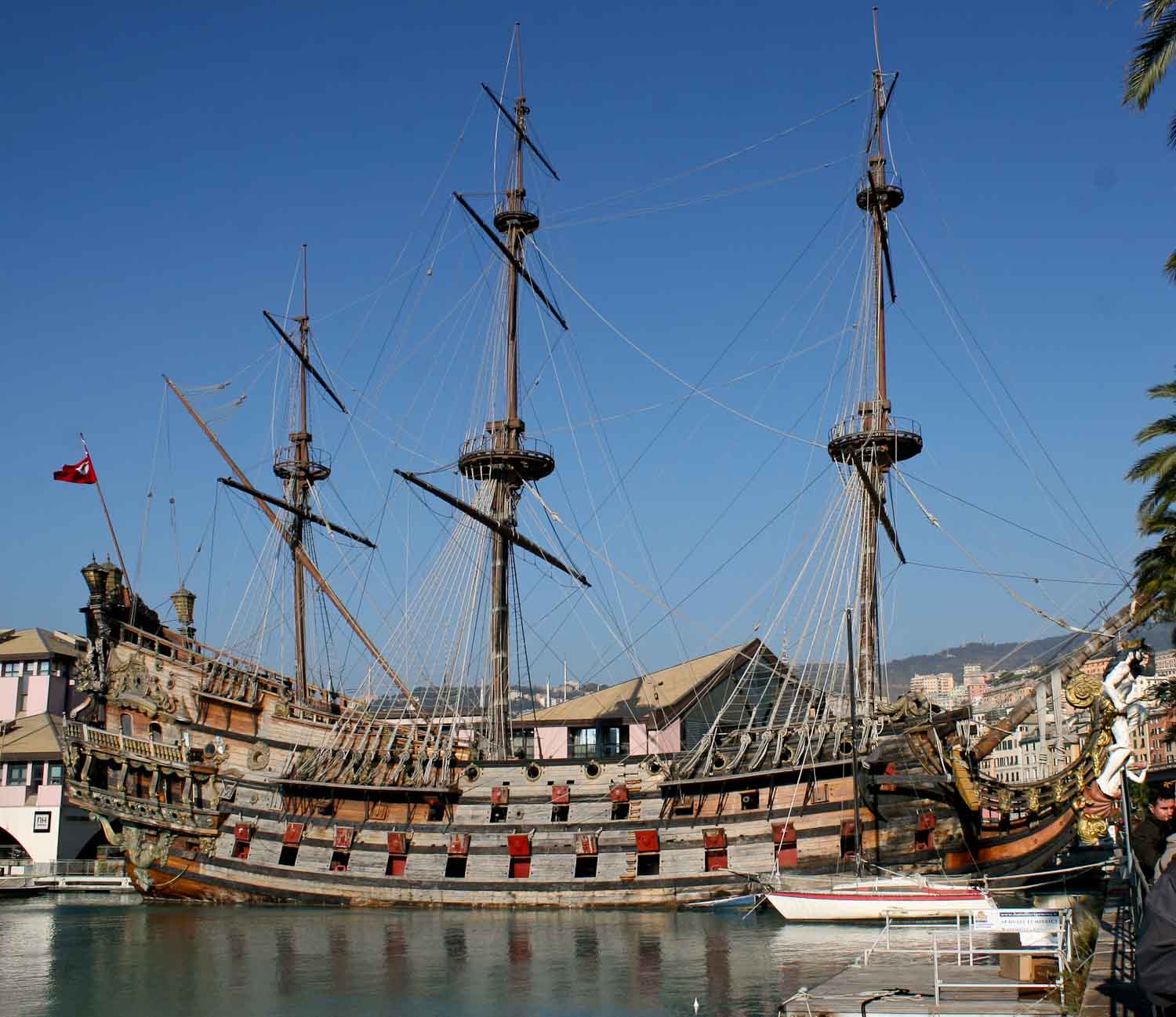 A historic galleon anchored in the harbour of Genoa

A question of authenticity

Today the casual style has spread throughout the fashion conscious republic, as can be seen by the dominant dress code along Genoa harbour, where the clothes revolution started several hundred years ago.

I walked closer to the wooden galleon with cannons poking out through hatches in the hull in order to catch sight of the sails. It could be fun, if they were made from original blue jeans material. The spearhead, however, looked remarkably inauthentic and plastic like, and by the gangway I found an explanation. This ‘Neptune’ was not an original Spanish galleon from the mid-17th century, but scenography for Roman Polanski’s film ‘Pirates’ that came out in 1986.

I didn’t bother paying the 5 euro fee to get on board, but continued along the old port in search of better clues to understanding Genoa past and present.