The Mythological Origins of Chieti

The history of Chieti in Abruzzo dates back to the second millennium B.C. making it one of the most the most ancient Italian cities with a rich mythology of origin.

The first people to settle on the hilltop overlooking the estuary of the Aterno-Pescara River were a tribe of Marrucini. A bellicose group of hunters with a flair for metal work, growing beans and domesticating animals. They fought against the Romans for a couple of centuries, until they realized they were on a losing streak and decided to switch sides. Chieti, which was then called Teate, was placed under Roman municipal jurisdiction and equipped with Roman conveniences like an underground water supply system, public baths, an amphitheater and a temple. 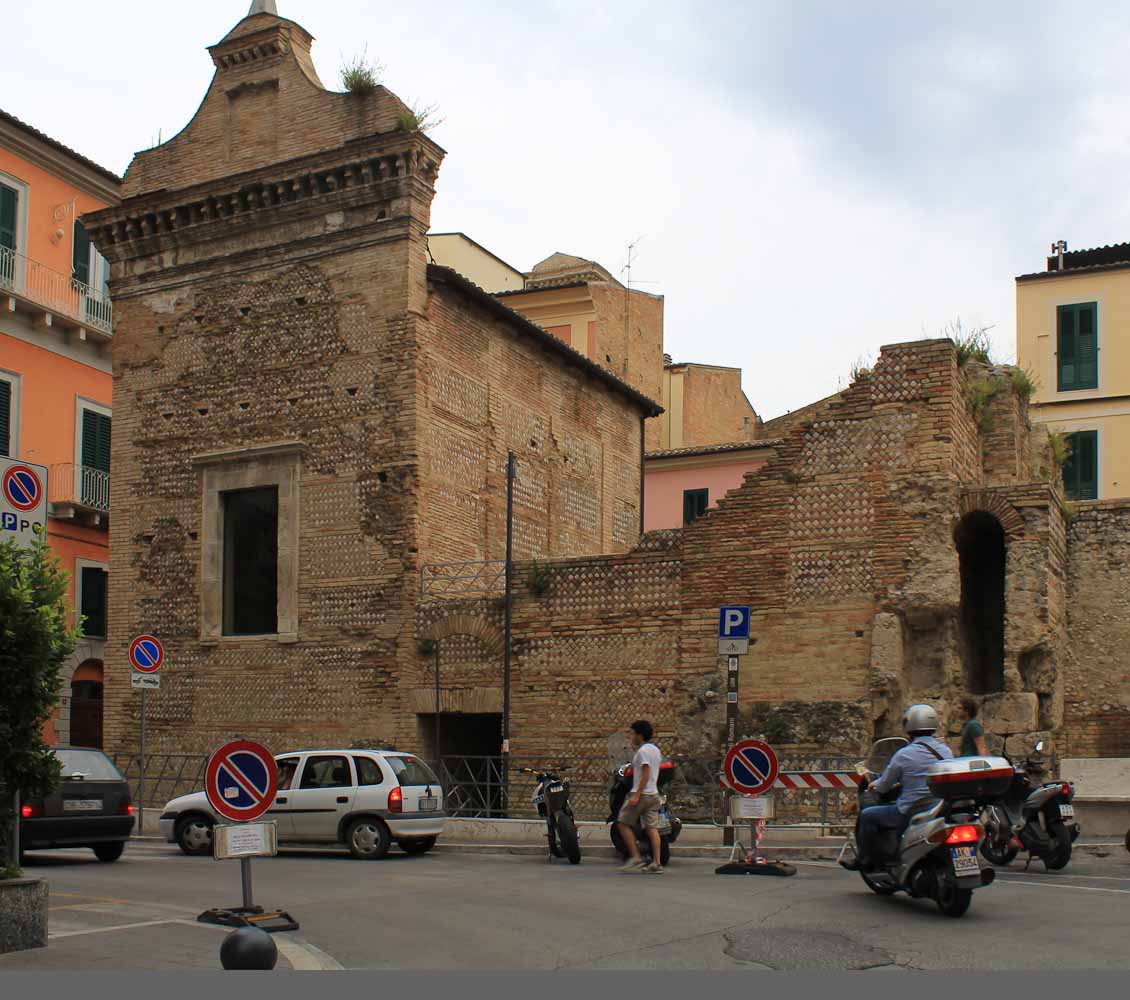 The Roman remains in the centre of Chieti are squeezed by modern housing and infrastructure.

Still, the marrucini couldn’t forget their independent past,and mythological stories about the origin of the city, which were later picked up by Medieval historians, started to flourish.

According to the historian Girolamo Nicolino (1604-1665) Chieti/Teate was founded by the Homeric hero Achilles, who named the town after his mother, the Nereid Thetis. How this impressive youth managed to come from an island in the Aegean to Abruzzo and back to fight in Asia Minor remains an insignificant detail, but other details such as the dating are remarkably precise. And in Chieti’s municipal emblem, Achilles can still be seen on a rampant horse holding a spear and a shield with a white cross and four keys to the gates of the city.

Nicolino claimed that Chieti was founded in 1181 BC, just one year before the end of the Troyan War. The dating means that the semi-god Achilles, who had been made almost immortal, when his mother dipped him in the River Styx, carefully holding on to a tendon in his foot, and who had been kept quite busy all his life, first hiding among a group of girls to avoid going to war, then ousted by Odysseus and sent to fight against Troy. In battle he became known as one of the most courageous, undefeatable Greek warriors, until somebody nicked his wife and he refused to fight for a period.

While sulking he must have left the battlefield, skipped over to Italy and founded Chieti. After this short break, Achilles returned to Asia Minor and resumed fighting, until a stray arrow penetrated his vulnerable heel and he died, without seeing the end of the war. 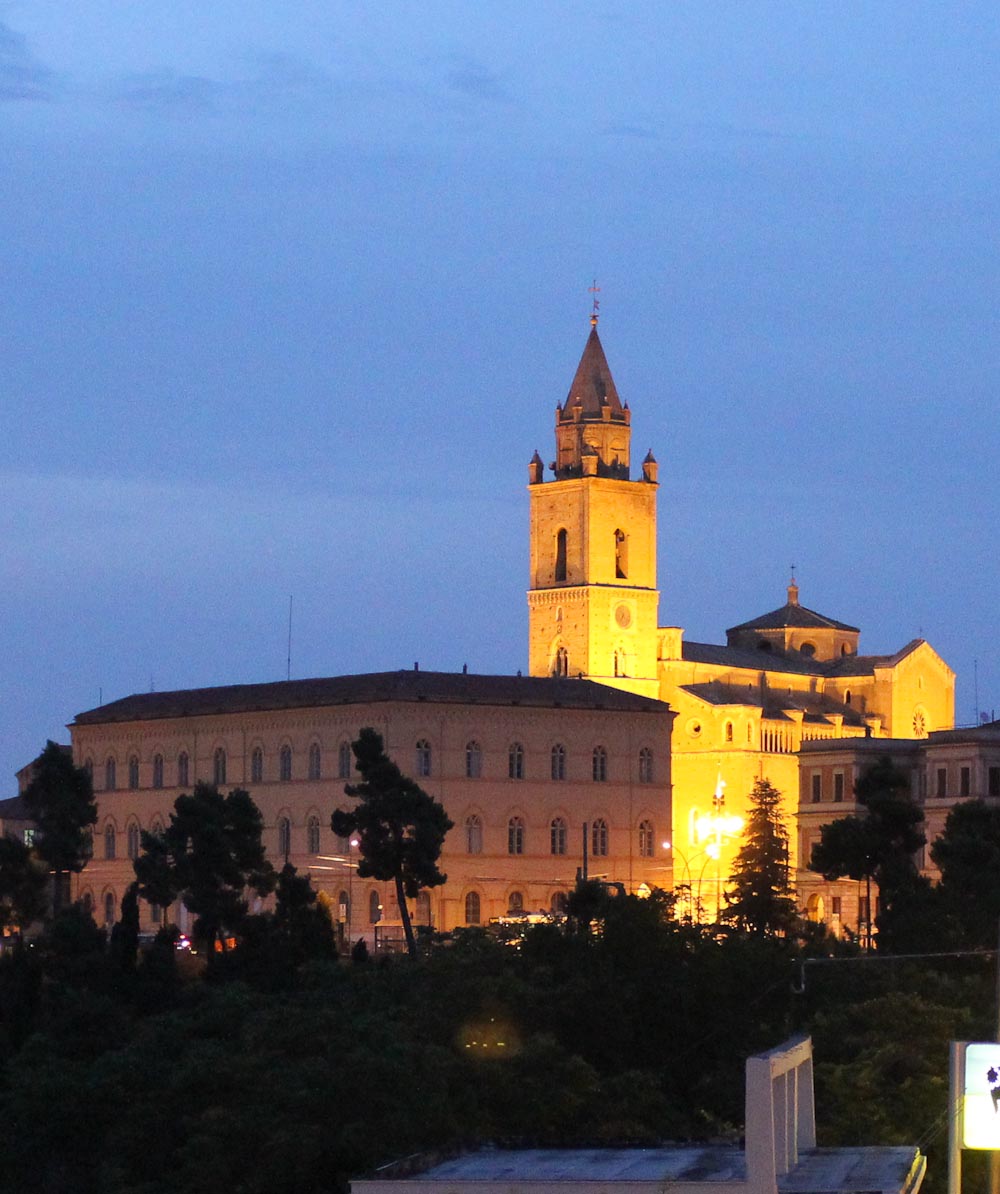 The cathedral of Chieti was built upon the site of a pagan temple for Hercules.

A Paragon of Greek Masculinity

Another historian, Lucio Camarra (1596-1656) disputed this claim as unrealistic. He agreed that the Chieti had been founded by the people from Arcadia, but set the date to 1250 BC before the fall of Troy, which left Achilles out of the equation. I’m not pretending to understand the maths, as the numbers tend to vary from one internet source to the other, but the crux of the matter was that Chieti must have been founded by another Greek hero.

Some speculate that the Arcadian could be the paragon of Greek masculinity Heracles, who in-between his twelve labours might have found time to bless a hilltop in Abruzzo with his presence. Heracles was later adopted by Rome and given the name Hercules. Proponents of this theory refer to some ancient coins stamped with Heracles symbols, a bronze of Heracles in repose that was found at a nearby sanctuary and the discovery that the present cathedral of Chieti was founded on top of a pagan temple dedicated to Heracles / Hercules.

The theories about the origin of Chieti are all highly entertaining, but they are just speculations. The prosaic truth is that Chieti was probably founded by a group of migrating Indo-European, who ensconced themselves on a hilltop, where they developed their own peculiar marrucini dialect and mythologies.