Things you must do in Sperlonga

Perched on a promontory on the edge of the Pontine Marshes, Sperlonga is a fashionable tourist town with long stretches of sandy beaches.


Here’s a suggestion of 5 things you must do in Sperlonga.

The Latin name for Sperlonga means ‘cave’ or ‘grotto’, and for centuries the grotto was the main distinguishing feature of this place on the coast of the Thyrrean Sea between Terracina and Gaeta. But after the drainage of the Pontine Marshes and the construction of a coastal road, Sperlonga became a fashionable holiday town, where many Roman families have their summer residence. 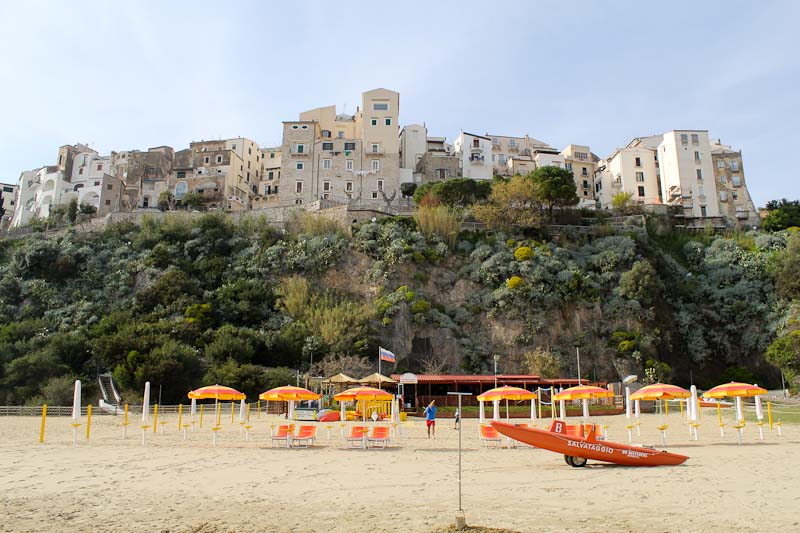 There’s lots to do on the beach in Sperlonga all year round.

Play on the beach

The main attraction in Sperlonga is undoubtedly the beach. Challenging parking conditions and a steep one way circular road around town help to keep the masses away, but in summer the beautiful beaches are packed with deck chairs and beach umbrellas. Still, you can always find a place to play beach volley, built a sand castle or rent a pedalone hydrobike. And from September to June you can take a nice long walk by the sea or bring a fishing rod and see if you can catch fish from the beach. 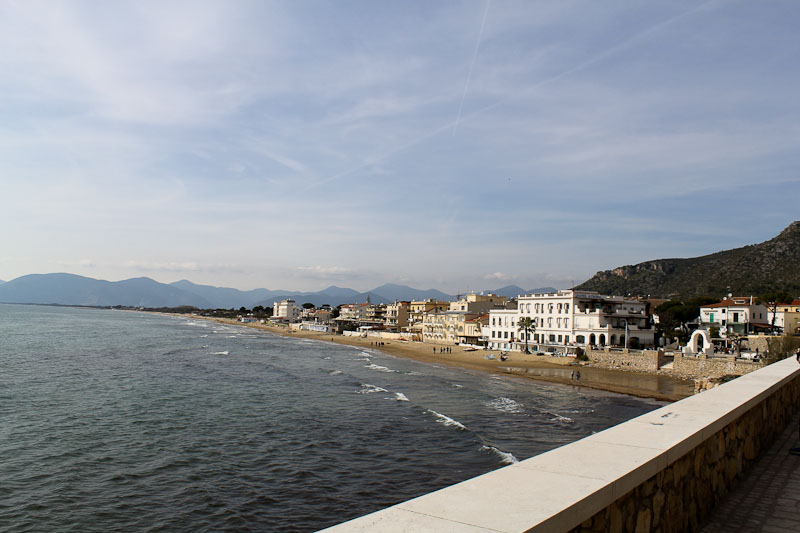 Sperlonga is a great place for walking by the seaside or in the narrow alleys of the old town.

Any proper Italian holiday town has a promenade, where you can stroll back and forth after dinner, while you eat and ice cream, greet acquaintances and chat with the people you meet. In Sperlonga the promenade encircles the promontory, directly above the sea and far away from motorized traffic. It’s magic. And when you get tired of walking the same distance, you can climb the stairways to the old town and explore the narrow alleys, whitewashed houses and charming terraces overlooking the coast. 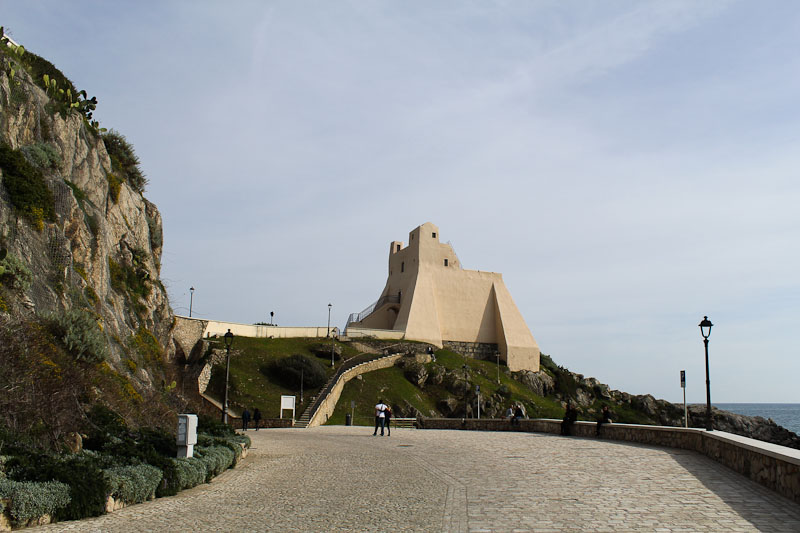 Torre Truglia has been destroyed and rebuilt several times though the centuries.

Torre Truglia looks like a desert fortress used by the French foreign legion, but it is a proper watchtower that has been destroyed and resurrected several times over the centuries. The present watchtower was built on the foundation of an ancient roman ruin in 1532, but only 2 years later it was destroyed when Barbarossa. This happened several times over the course of the next centuries, but from 1870 the tower has been used by public administration and as a small museum. Just go inside and have a look around. 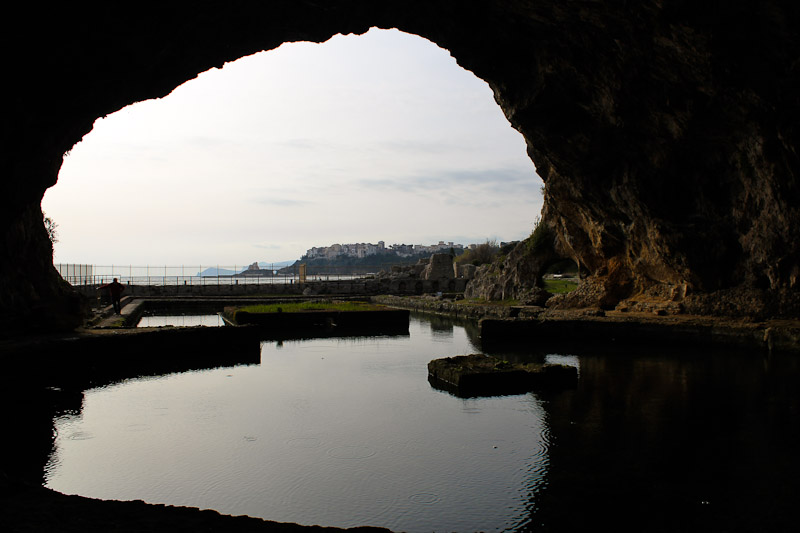 From the grotto there’s a magnificent view of the coast and the Ponza islands.

If you walk along the beach for about an hour, you’ll reach the famous grotto, where the Roman Emperor Tiberius had installed groups of sculptures celebrating the deeds of Odysseus. The natural grotto collapsed in 26 AD and the sculptures lay crushed, for almost 2000 years, until they were discovered in 1957 by civil engineers building the coastal road above the site.

In Roman times, the grotto was used as a dining space. A fish pond ran into the grotto and in the middle there was a rectangular island in the fish pond with a light pavilion and couches were guest could eat and and admire the artwork.as well as the artificial stalactites and encrustations and other theatrics decorating the walls.

Today there are just the bare walls of rough stone, but you can go island hopping in the grotto. Just remember there is no entrance from the beach. Only point of access is through the archaeological museum. 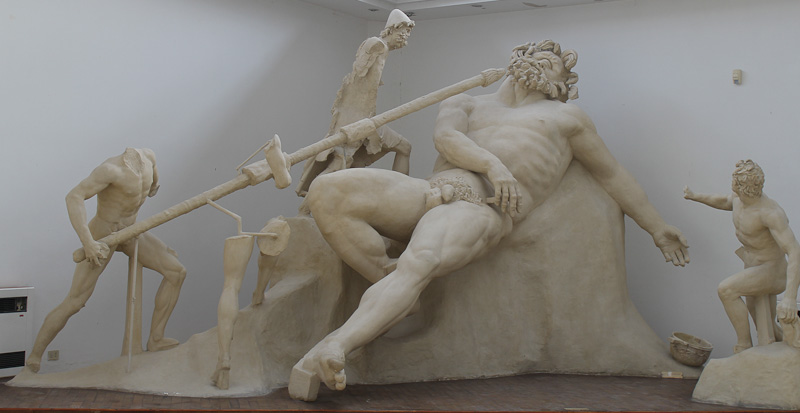 Odysseus and his men prepare an attack on the one-eyed cyclops.

A visit to the archaeological museum of Sperlonga is a must do in Sperlonga for anyone with the slightest interest in mythology or the history of the Roman Empire. Outside by the sea you can explore Tiberius’ grotto and study the founding stones and layout of his villa, and inside the museum the five groups of sculptures found in the grotto have been restored.

The sculptures that date back to the early Imperial period are in a highly expressionistic style known as Hellinistic baroque, where movements and sentiments are charmingly exaggerated. Here you can see Odysseus and his men preparing to blind the drunken, one eyed cyclops Polyphemus with an olive stick, and the fragmented Scylla group where Odysseus’ ship is attacked by a many headed monster. This centerpiece is displayed as a puzzle with quite a few missing pieces, so it is an advantage to know the story or be gifted with a vivid imagination.