Avellino in Campania is a provincial town with around 55.000 inhabitants and very few tourist attractions. These five monuments in Avellino may be easily forgotten, but each one of them points back to the history of Avellino and Southern Italy.


Over the last century Avellino has been nearly eradicated twice. On September 14th, 1943, at 10:55 in the morning Allied planes bombed the city in an attempt to cut off the retreat of German panzer units over the Bridge of Ferriera. It was a market day and the bombs fell heavily on the market square which is today’s Piazza del Popolo. More than 3.000 people – or one in eight Avellinesi – lost their lives. 37 years later on November 23rd, 1980, an earthquake with a magnitude of 6,9 hit the central part of Campania, causing massive damage to whatever remained of the historic centre of Avellino. This has given Avellino a modern appearance with broad boulevards, open squares and concrete housing, very unlike other cities and towns in this part of Italy.

Today Avellino is best known as hometown of the leader of the 5 Star Movement, Luigi di Maio, and the mob-boss character, Tony Soprano, from the television series of the same name, but the reality of the place is more prosaic than the colourful people might suggest. Avellino is a working town, and after hours families walk up and down the high street or sit on a bench to chat. I asked for recommendations of what to see at the hotel, and they suggested a trip with the funicular railway from nearby Mercogliano to Montevergine. The view from the top of the hill should be spectacular, but wanting to experience Avellino, we saved the pleasure for some other time. This gave me plenty of time to dig into the history of the five monuments I found most interesting in Avellino.

The statue of Carluccio
The most important monument in Avellino can be found in Piazza Amendola in the sad remains of the old town. Right here, surrounded by what looks to be permanent scaffolding, a few shops, a cafe and mostly well-kept houses with relatively fresh coats of paint in different shades of yellow, there is an obelisk with a bronze statue on top. The statue represents the child King Charles II of Spain, which in the 17th century included Southern Italy. Carluccio, Carluciello or Reuccio, as he is known locally, has been the mascot of Avellino since it was erected in 1669.

At that time, King Charles II, who ascended to the throne at the age of four, was seven years old, and the statue shows him wearing a feathered hat, a robe with bishop sleeves and fancy boots. In his right hand he is holding a wand, as a conductor or magician directing the show. In reality, King Charles II was the figurehead of an empire being torn apart by internal power struggles, while he himself suffered from severe inbred illnesses and deformities, most notably the elongated Habsburg jaw, consisting of an over-sized jawline and large tongue that made activities such as eating and speaking difficult.

Still, a local nobleman in Avellino must have thought he could ingratiate himself with the court in Naples by commissioning a flattering statue of the king. The sculptor was Cosimo Fanzago and the people in Avellino loved his little bronze from the start. Carluccio survived the last century’s the bombing and the earthquakes, and every time the local football team wins, the statue in Piazza Amendola is dressed up with the team’s scarf or flag.

A local newspaper L’Irpinia suggests that the affection is rooted in the strong similarities between the child king and the city. They quote the Pope’s ambassador to the court, who met King Charles II when the latter was in his early twenties. The newspaper quotes the ambassador for saying that the king is ‘lower than tall, malformed and with an ugly face… Sometimes he shows signs of intelligence, memory and liveliness, but now he seems slow and unresponsive, clumsy, lazy, with an amazed expression. You can do what you want, he has no will of his own.” A sad epitaph for both the King and Avellino.

Torre dell’orologio
Still on Piazza Amendola we turned around to see another hallmark of Avellino. The baroque clock tower sticks its neck out behind Palazzo della Dogana and Salita dell’Orologio leads up to the base, which was also partly covered in scaffolding and orange boards, hopefully as a first step towards restoration.

The 17th century structure looked grimy and forlorn with black soot in all the undulating crevices. On top of this 36 meter high column there is a – probably – pink cupola, two tiny clocks to be sounded in case of danger and dials pointing in all directions. Given its height and location the clock tower is visible from afar, and it must have been an important landmark for the farmers, who used to bring wheat from Puglia to Napoli.

Like most other structures in Avellino, the Torre dell’orologio has experienced the consequences of several earthquakes, and it was restored for the first time in 1782 as a plaque on the base commemorates. The tower collapsed almost entirely following the earthquake of 23 November 1980, which made it necessary to reconstruct some original elements.

Outside Avellino, the clock tower is most famous for decorating the cover of an international scientific journal called ‘Peace Economics, Peace Science and Public Policy’. The journal is edited by Professor Raul Caruso, who happens to be from Avellino. 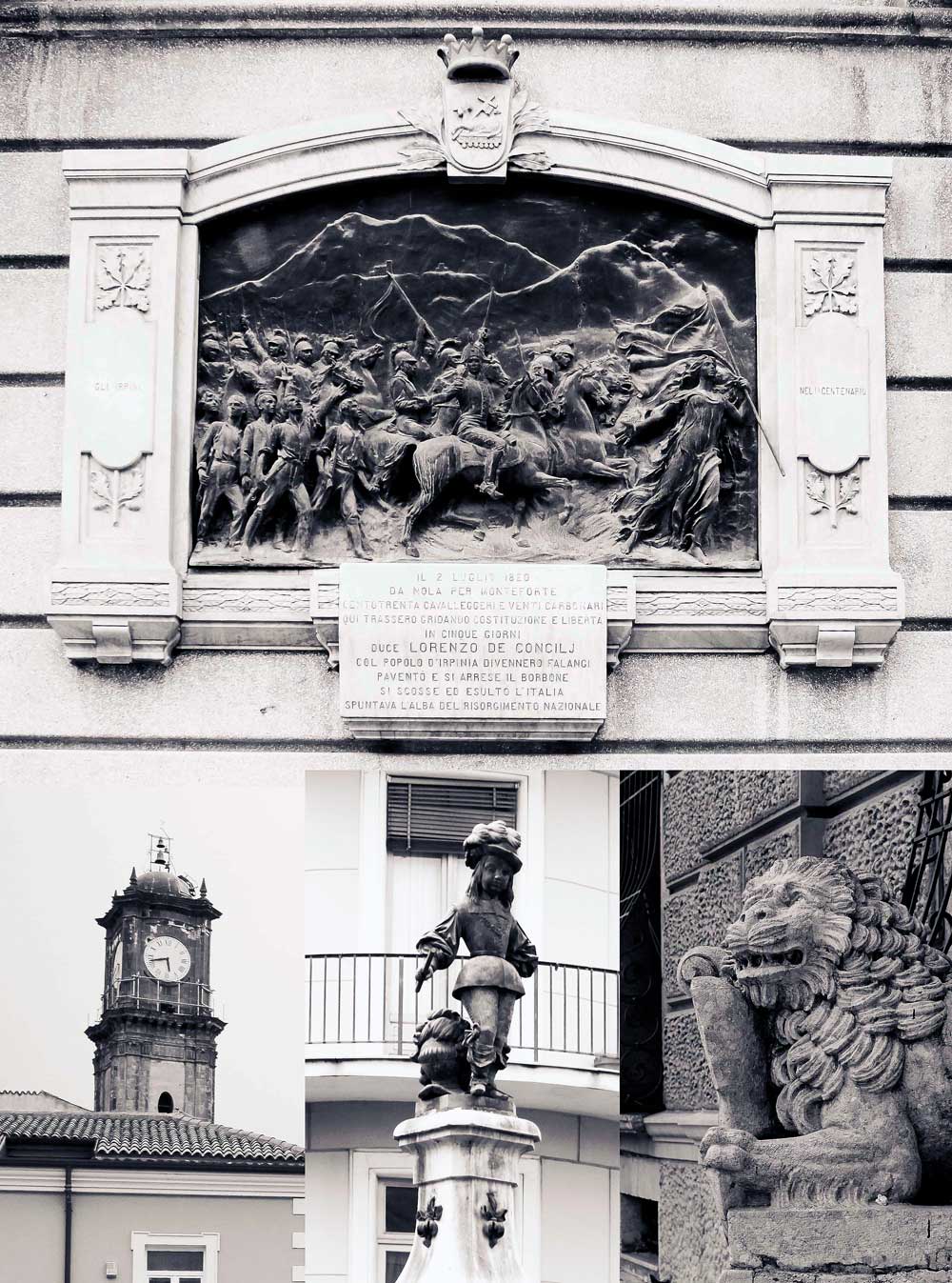 The five monuments in Avellino will most probably not leave a lasting impression, but there is an interesting story behind each monument with deep roots in the history of Southern Italy. The photos show the plaque commemorating the Neapolitan Revolution, the clock tower, Carluccio and the stone lion..

The stone lions
I believe every Italian town of a certain size has a pair of lions guarding a palazzo or a church. In Avellino, they are placed outside the prominent Palazzo Caracciolo, which is now the seat of the local government on Piazza dellá Liberta. The lions look somewhat forlorn and weather beaten, but you can still admire the thick curly mane, deep set eyes and flaring nostrils. What makes these lions remarkable, however, is their walrus moustache and sharp milk teeth. The craftsmanship is a little too crude for the lions to be imposing.

I have no idea how old the lions are, but Palazzo Caracciolo was erected between 1708 and 1713, when the feudal lords of Avellino moved out of their dilapidated Medieval castle located near the statue of Carluccio in the old part of town. They decided to bring along the two lions that had up to this point been guarding a beautiful old customs house. The shift moved the centre of gravity in Avellino from the old part of town to Piazza della Libertà and Corso Vittorio Emmanuele II.

In the same period, the feudal lords introduced woolworks, ironworks and copper industries to Avellino, initiating a period of urban and demographic expansion and economic prosperity. And in January 1735 Palazzo Caracciolo hosted the successor of Carluccio, King Charles III of Bourbon, who was preparing to visit his newly obtained Kingdom of Naples. King Charles later built a number of palaces around Naples, most notably the lavish Reggia di Caserta, but none in or around Avellino.

Memorial for the Neapolitan Revolution
Moving on to Corso Vittorio Emanuele 4, we find a nondescript building with a modest bas-relief. It depicts a woman in a rather transparent, billowing dress, holding a flagpole. Behind her an army of horsemen and workers shout and shake their fists. I presume the woman relates to the French Marianne as an impersonation of liberty, fraternity, equality and reason. Below the bas-relief there’s an explanatory text saying:

The plaque commemorates the Neapolitan Revolution, which is generally considered one of the first events that paved the way for the Italian unification (Risorgimento) some 40 years later. As such it marks a proud moment in Avellino history.

In the early 1800s, people who were unhappy with the repressive political system in south Italy formed secret revolutionary societies called the Carbonari (charcoal makers). Their purpose was to defeat feudal tyranny and establish a constitutional government, but they lacked a clear political agenda, and their revolts were easily suppressed. In July 1820, however, the Carbonari were joined by two officers and their regiments of cavalry, and together they marched from Nola and Monteforte to Avellino, where they were received with great enthusiasm by the garrison commander, Lorenzo de Concilj, and the people of Irpinia.

The protests worried King Ferdinand I of the Two Sicilies, and he agreed to grant a new constitution and the adoption of a parliament. A partial victory that caused hope among Carbonari sympathisers all over the Italian peninsula. 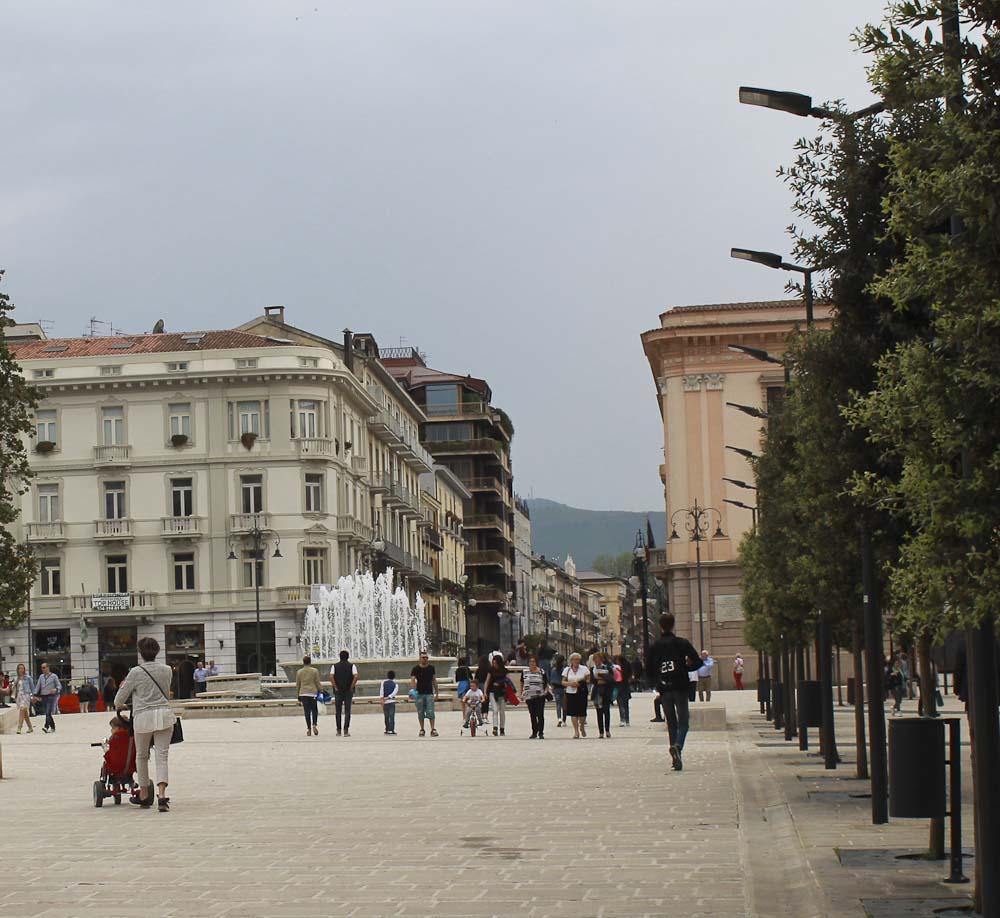 Piazza Liberta with the fountain shooting refreshing water jets up in the air.

The Fountain on Piazza Liberta
The last of the monuments in Avellino to be highlighted here could have been the monument for the people killed by the bomb 1943, but I find the Italian Monumenti ai Caduti too sad and disturbing and most of the time the charmless Piazza del Popolo appears deserted.

Not that the modernist concrete fountain on Piazza Liberta offers must respite in terms of beauty or remarkablity, but the water jets cool the air, there is no shortage of places to sit down and take a rest and the pedestrianized and perfectly level pavement is ideal for skateboards, roller blades, pushchairs, bicycles, walking sticks, shopping carts, rollator walkers, balloons, footballs and frisbees. This is where the people of Avellino promenade, meet up and hang out, and I would recommend all tourists with a taste for people watching to do the same.

Where to stay:
We stayed at the Viva! Hotel right in the centre of Avelline. A comfortable modern and quiet place serving good Italian breakfast.

Where to eat:
For dinner I would recommend the Antica Trattoria Martella in Via Chiesa Conservatorio 10. It’s a family-style restaurant serving simple, but well-prepared pizze and local food. Especially the buffet bar with a wide selection of local dishes is popular. The menu is only in Italian.

What to eat: :
Avellino is famous for their Brasato avellinese, a roast of veal marinated in black, red and green pepper and cooked for hours over low heat. Another local dish is Lasagne imbottite which is very different from the traditional lasagne, as it is made with meat sauce, boiled eggs, mozzarella, ricotta, sausage and grated cheese. Fusilli avellinesi is homemade pasta from semolina flour served with tomato sauce, fried meatballs, basil and a shower of pecorino. The local pizza and panzarotti is made with whole grain flour and topped with ricotta, sausage, ham and eggs. There are the famous Cicci di Santa Lucia, a hearty soup made with chickpeas, lentils and vegetables including garlic and chili. And for dessert you might want to try the Spantorrone, which is Italian nougat paired with a spongecake drowned in rum and liquor. Yum. 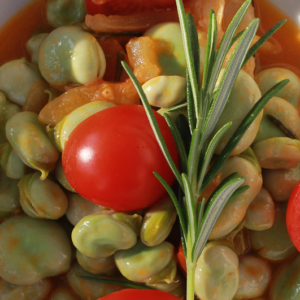