The German speaking majority of Merano south Tyrol in Italy was repressed well into the ’60s, when the UN put an end to Mussolini’s Italianizing campaign.


The little old lady, who runs a Meran/Merano Gasthof, scrutinizes every guest carefully, before she decides who to let in to the immaculately clean doctor’s mansion, while her free-ranging turtle guards the door. The turtle has a fetish for bare feet in open shoes, and in spite of it being more than 50 years of age it attacks relentlessly, making me perform an inelegant slow motion turtle trot in the courtyard, while I wonder whether this kind of reptile has teeth that bite hard in the tetanus vaccination sense, or whether it just nipples. The uncertainty makes me want to flee. 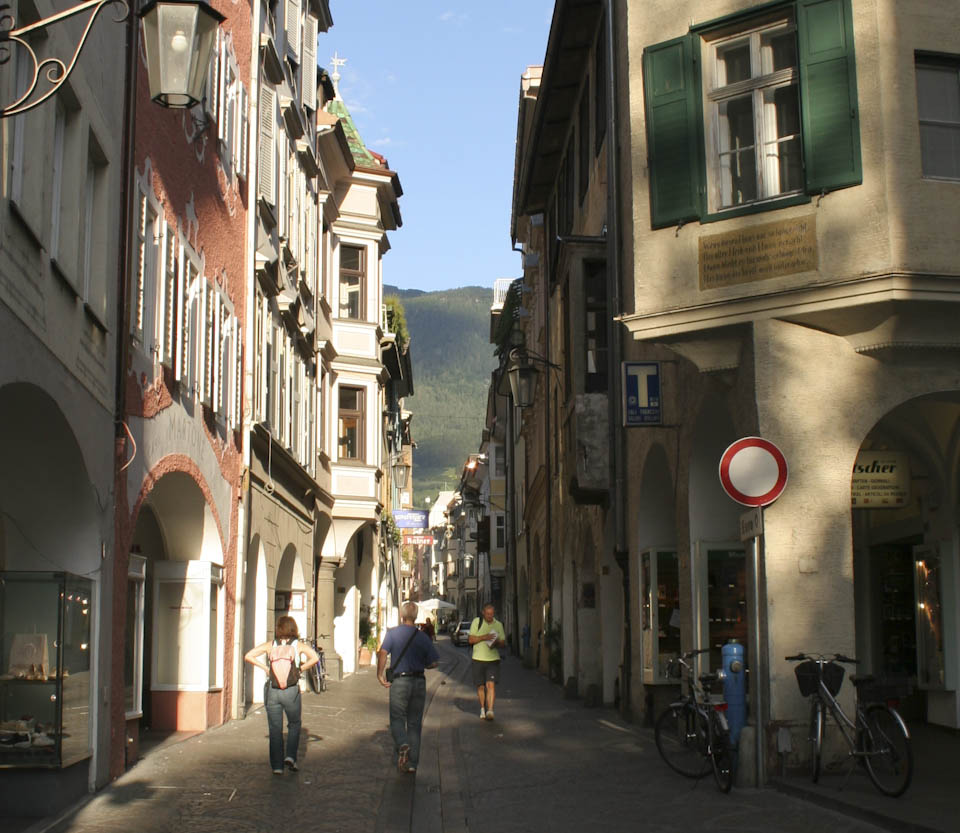 In a corner inside the door an old stove with hand painted tiles sweat terribly in the summer heat, and the tiny guest rooms with shared bath and toilet in the corridor appear frugal. But the view is magnificent, the floors are polished and the gate to Merano – or Meran as the lady prefers to call it – is only due passi down the street.

On the stairs we meet a couple of in their 30s in full dirndl and Tyrolean dress. The woman wears an apron dress with a laced up corset, huge white puffed sleeves and hair braids coiled over the ears, while the man is dressed up in long stockings, bare legs and lederhosen with suspenders. All he needs to complete the picture is a green Tyrolean of the kind Danes like to sing and laugh about, but here the dress is obviously a serious matter.

– When I went to school here in Meran, we were not allowed to speak German, not even in the schoolyard. Everything had to be done in Italian, and if by mistake someone happened to utter one German word, they were severely punished, the little old lady confides. Repression of the German-speaking majority in Alto-Adige continued well into the ’60s, when the UN intervened and put an end to what began as Mussolini’s Italianizing campaign.

Today the border conflicts have been narrowed down to a clash of symbols in eg. the pedestrian street, Via Portici, where pasta shops lie side by side with shops selling local grappa, sausages and speck. Half timbered houses decorated in soft colours sport hanging geraniums in pots on the balconies, and Bierstuben with outdoor serving mix with whitewashed Italian styled houses in the cathedral square.

Merano is lovely town, and it is obvious why it became one of Europe’s first and largest centres of mass tourism around the turn of the 20th century. Back then a great many rejuvenating springs attracted wealthy foreigners, and the wellness industry is still alive and kicking with spas, thermals baths, sanatoriums and wellness hotels. In the winter Merano appears as a lively ski resort, and during summer wellness tourists mix with wandering Dutchmen and Germans, as can be seen from in the local high street fashion, which includes bathrobes, thick stockings and trekking boots.

Merano is situated at the foot of the mountains, where the Passiria river comes roaring. Further up this river in San Leonardo 1767 the local hero Andreas Hofer was born. Andreas Hofer inherited the Sandwirt inn from his father, and he also made a living as a horse dealer, but in 1805 Tyrol was transferred from Austria to Bavaria due to the advance of Napoleon’s army, and this spurred Andreas Hofer to organize a tyrolean uprising.

The revolt began on 9 April 1809, when Hofer poured sawdust into the River Inn as a sign to mobilize the peasants. After several bloody battles against the French army, the Tyroleans conquered Innsbruck, Bolzano and Trento, but Napoleon’s men did not give up, and in January 1810 they managed to capture Hofer, who had been betrayed by a neighbour. Andreas Hofer was executed shortly afterwards in Mantova. Since then, he has been granted martyr status in Tyrol, and last year the 200 year anniversary of the peasant revolt was celebrated with exhibitions, parades, festivals and role-playing in of the many towns in the area.

Among the participants in the celebration were people like the old lady at the Gasthof, who still feel a need to protect Tyrol’s specific cultural identity. And of course the turtle, who willingly attacks the toes of all foreign invaders that get too close.

The painted house in Trento

Leuca – The tip of Italy’s heel