What’s so interesting about Merano Cathedral? A Gothic hall church dedicated to St. Nicholas on the market square just south of the Alps? Here are 3 suggestions on what to look for.

I’m not a religious person, but I’m fascinated by churches as cultural and historical monuments, and the stories they tell. Take Merano Cathedral at the end of Laubengasse as an example. A massive Gothic structure erected centuries before long the wellness industry and apple strudel made Merano famous, and designed with a few inconspicuous details that I find interesting.

The church dates back to 1302, and the construction stretched over two centuries. With a building site right on the market square, the ambitions, aspirations and piety of Merano was immediately evident to travelers and traders. They could see a stone structure much larger than the surrounding – now perished – clay and timber houses. Merano Cathedral was constructed using the latest building technology and architectural trends such as ribbed vaults, pointed arches, blind arcades and small pinnacles were incorporated in the design. A typical Gothic hall church with all the characteristic Gothic features.

At the same time Merano Cathedral has a few outstanding aspects – or features I – at least – haven’t noticed elsewhere. 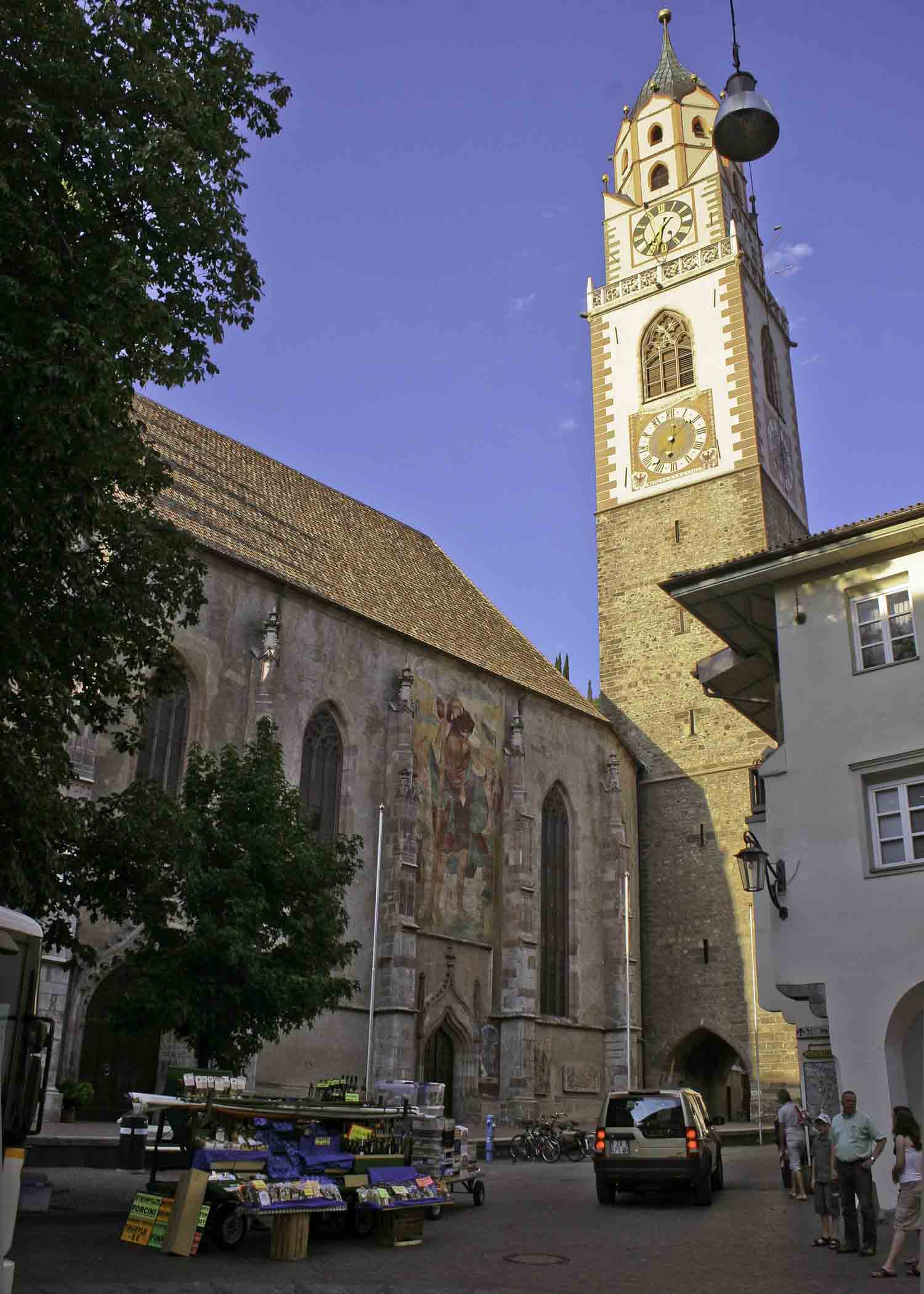 Merano Cathedral facing out to the market square.

Around the front door of Merano Cathedral the facade is ‘decorated’ with headstones, which seems mildly bizarre. Influential people at the time of construction have wanted to obtain immortality by combining tombs with a the place of worship. And they didn’t want to wait until people had entered the church to make their presence felt, but had to get right up in the face of people passing by as well. A little too outgoing for my taste.

On the exterior walls of Merano Cathedral there are several colourful frescos, a hallmark I don’t recall seeing on churches further south in Italy. I’m not sufficiently strong in Biblical narratives to identify the parables depicted, but the huge fresco on the wall facing the marketplace could well be Saint Christopher helping children cross a river. It’s definitely a lovely painting with vigorous strokes and vivid colours in verdigris, yellow and carmine, even though it doesn’t compare to the celebrated masterpieces found in other Italian churches. 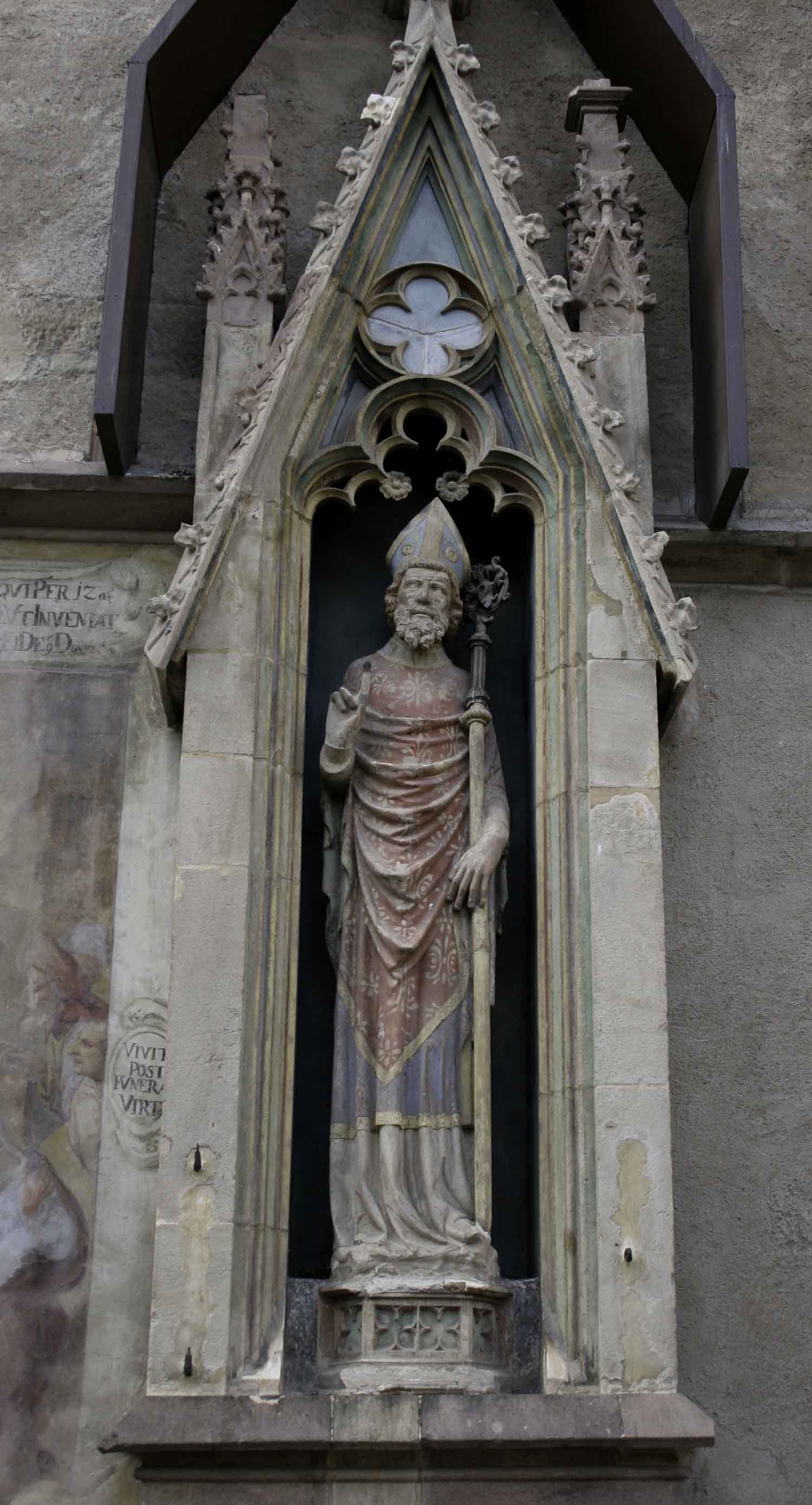 A slim statue of St. Nicholas observes the dealings in the market square.

St. Nicholas without a purse

A sentry box on the facade shelters a long slim figure of a saint, probably St. Nicholas considering the church dedication and the attire of the figure who is dressed up in with mitre and a crosier rod and staff to shepherd the believers. The most ingratiating thing about this figure in my opinion is the hand sign. St. Nicholas’ index finger is pointing up and it could be an admonition, a sign victory and a christogram as one of the first gang signals in religious history. With powerful body language like that, it doesn’t matter that St. Nicholas seems to have lost his traditional purse.

Which reminds me not to leave Laubengasse without taking a look around the altmodish, Germanic shops and buying at least some speck and grappa to take home.

Ragù of lamb with cicoria and pecorino