The three main attractions of Lucca in Tuscany

Every year in October/November Lucca is invaded by scores of comic book look alikes. But the divine comedy of this charming Tuscan town can be experienced any day.

We visited Lucca a couple of days prior to ‘Lucca Comics and Games’, which is the leading comic book and gaming fair in Italy with more than 200.000 visitors dressed up as cartoon look alikes. Tents and pavilions had already started to crowd the historic centre. Not that the city is unaccustomed to the influx of day trippers. Lucca ranges among the top destinations in Tuscany rivalling other former city states like Florence, Pisa and Siena with the added charm of intact city walls that have kept the car tides at bay. But the oncoming comics convention underlined a sense of playful pretence that can also be observed in some of the main sights around town.

The city walls are military fortifications serving as a peaceful park.

Take the monumental mura as an example.  The 4 km long, 12 metres high walls with 11 bulwarks around the old town were originally built in the 16th and 17th century as a deterrent to prevent expansionist neighbour states from invading the city at the foot of the Apuane Alps. It worked, and the only attack the walls had to withhold was a disastrous flood in 1812, when the river Serchio threatened to overflow the historic centre.

The flood was prevented by sealing the gates with mattresses. Afterwards this military fortification was turned into a welcoming city park used for roller skating, biking, jogging and the evening passeggiata. A fantastic place to relax and meditate, while you enjoy the shady view of the old town with its intricate layout, terracotta roofed houses and the hilly Tuscan landscape. 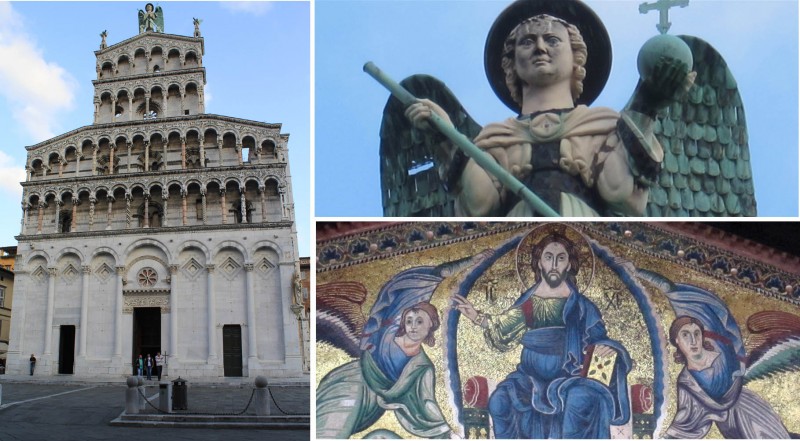 The city of a hundred churches

Lucca is sometimes referred to as “città delle cento chiese” due to the – even for Italy – large number of religious buildings in the city. Some of these buildings have been converted to other uses and are no longer what they appear to be, but even secularized northerners like us appreciate the stunning façade of the Duomo di San Martino along with the mystery, legend and cult surrounding its Volte Santo crucifix.

And it is hard not to feel a tiny spiritual awakening when you see the 13th century gold leaf mosaic that highlight Christ and the apostles on the church of San Frediano. The decorations make it evident how renaissance painters and sculptors used art to convey religious ideas. Medieval cartoons are not exactly subtle in their attempt to educate the illiterate masses. 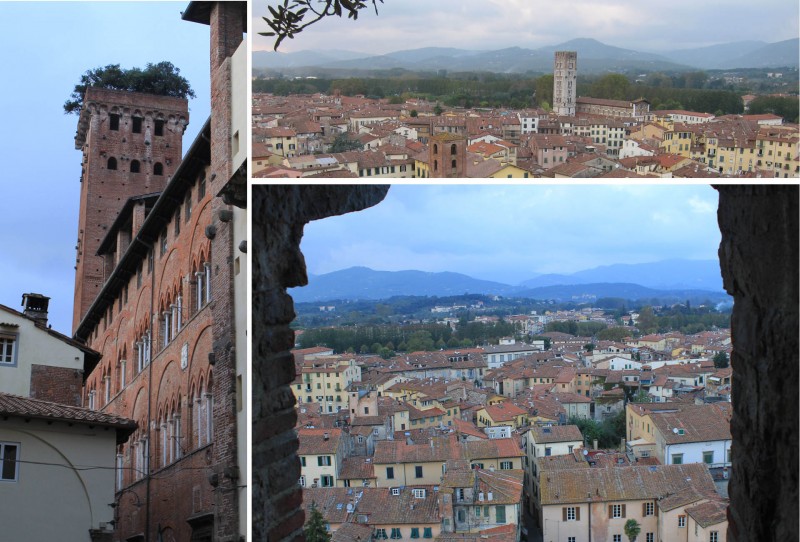 The Guinigi Tower with the hanging garden and magnificent views.

We crowned our visit to Lucca by climbing the 130 stairs to the top of the Guinigi Tower attracted by a hanging garden. Beneath the seven oaks planted 44 metres above ground we could see the city stretched out like Legoland with tiny marks of identification like the oval Piazza del Mercato, while the sun set in the horizon. Lucca definitely has its moments of great beauty and tranquillity.

A few days later we drove past Lucca on the motorway, while all exits leading into town were blocked by traffic. In each car, cartoon characters and comic look alikes sat lined up and ready to take in the city. It might not have been what Dante thought about in his references to Lucca in the ‘Divine Comedy’, but it seemed as a fitting reminder that we all have to pass through some sort of purgatory to enter this small piece of heaven.