The south coast of the Gargano peninsula in Puglia is not only extremely beautiful with white limestone cliffs lining emerald green and opal blue waters. It is also a treasure trove for geologists looking for traces of prehistoric wildlife in the rocks. And I suppose you could have the same kind of adventures along other limestone coasts.

In Vieste, we once met a young Dutch couple of geology students, who went out early each morning and returned late at night after field trips along the coast. According to them the Gargano peninsula had been an island in the Early Miocene (which – according to Wikipedia – is a period of climate and landscape change millions of years ago, when new mammals started to evolve).

At that time, there were no large animals on Gargano, so smaller species like mice, hamsters and hedgehogs evolved quickly into spectacular forms that have been preserved as fossils in the limestone. It was these freakish fossils the geologists hoped to find with their hammers and chisels.

Limestone cliffs along the south coast of Gargano

Fascinated by the idea of reading the past in a piece of stone, I started to study the hard surfaces hoping to find traces of a beetle or a wasp, yet nothing much ever materialized. But diving around a tiny limestone island we came upon heaps of sea urchin shells – not to mention some prickly live ones. None of them had yet been turned into fossils, but the shells are very pretty with interesting patterns and colours.

And collecting sea urchin shells became our vacation field study supplementing other grand collections of sea shells, desert sand, broken tiles and naturally sand blown glass shards. Even for tourists, it’s amazing how much affection and meaning can be invested in and deducted from a handful of pebbles.

What do you collect, when you are travelling? And what is your best free Italian  souvenir? 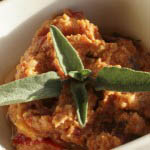 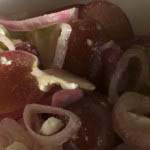 Onion salad with grapes and feta
Scroll to top