Italian pottery is produced in a few towns each with a special trademark. In Grottaglie it is the rooster as can be seen in the “Quartiere delle Ceramiche”. where a display shows 80 different rooster designs.

Like 32 other Italian towns, Grottaglie (TA) is a classified ‘Città della Ceramica’, which basically means there are lots of artisans and potteries around. Some say the ceramic tradition in Grottaglie dates back to the Greeks, while others trace it to the mid 18th century. All agree that the availability of pottery clay from the ravines and the steady demand for containers that could be used to transport and preserve Puglian farmers’ production of wine and olive oil have been good for the local pottery business. 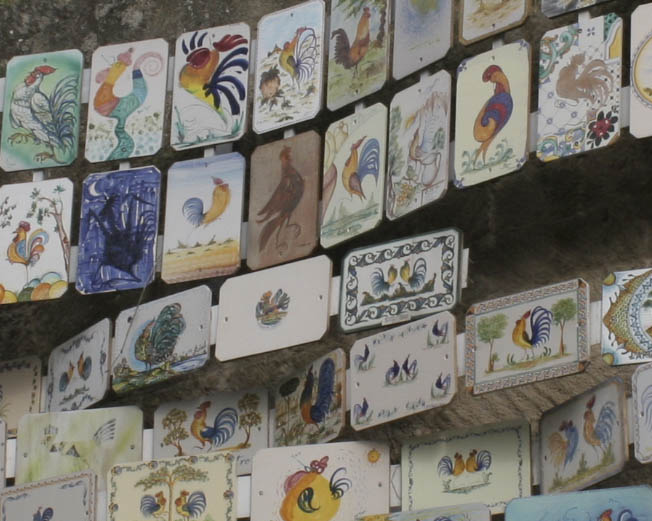 Pitchers and large jugs form part of the earthenware traditionally used in the kitchen. And plates, bowls, vases, mugs, cups and saucers still take shape in artisan workshops in Grottaglie’s “Quartiere delle Ceramiche”. Each series of items is more or less unique, but despite their differences all ceramists decorate their tableware for daily use with the dotted blue flower that characterize  Puglian pottery and with a personal interpretation of the Grottaglie rooster.

From what I’ve heard, the rooster motifs became popular among the rural population a hundred years ago, when entire families shared a communal plate placed in the middle of the table. As the plate was emptied, the centre motif appeared, and the rooster was a symbol of fertility, richness, longevity and promised the birth of a son and heir.

Through the years the rooster has been presented in more than 80 different  ways. Each Grottaglie artisan and workshop have their own signature bird and all the various designs are displayed in Via Crispi, where you can see a collection of cocky, naturalistic, bizarre, expressionistic, grotesque and futuristic roosters. Ready to start crowing every time they see a tourist with empty hands and a full purse.

Other things to see and do near Grottaglie than studying Italian pottery:

Castellaneta – The city of Rudolf Valentino