Coming from a country where the key persona around Christmas is a humanoid nisse, who features in animated department store windows, I’ve always found it hard to relate to the Italian ‘presepe’ tradition. Until a neighbour – who’s a mason by trade – showed me his very own, personal interpretation of a Puglian nativity scene.

A Tradition Dating Back to Saint Francis

According to Wikipedia, the first nativity scene was created in the 13th century by Saint Francis of Assisi who wanted to call attention to the birth of Jesus by showing a characteristic scene from the barn in Bethlehem. St. Francis’ nativity scene was alive with humans and animals in the Biblical roles, but eventually, statues replaced living participants, and static scenes grew to elaborate affairs with wood or clay figurines placed in landscape settings.

The figurines became particularly popular in Naples, where families started competing with each other to make the most lifelike cast that gradually expanded from Mary, Joseph and the infant Jesus to all kinds of Biblical and mundane characters including politicians, actors and celebrities. It is not unusual to see Silvio Berlusconi or Barack Obama among the Three Wise Men on display in Italian homes and churches from December 8, which is the Feast Day of the Immaculate Conception.

If Jesus Had Been Born in Puglia

From this point of view I shouldn’t have been surprised to see my neighbour’s presepe which was an exact replica of a nearby trullo shed. For hours and days, he had collected tiny stones and built them up in scale with the original. To give the finished presepe a more festive touch than the natural grey a few splashes of colour had been added, but apart from that it was a perfect – if rather heavy – miniature.

It took two strong men to lift the presepe trullo up on a chair, so we could admire the built-in electric light and the figurines of which only the archangel was missing. I’m sure the archangel  is in place now though, along with all the other characters inhabiting Italian nativity scenes throughout the country.

Other posts on tradition and religion 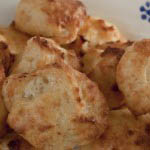 Steak with mushrooms and pepper
Scroll to top