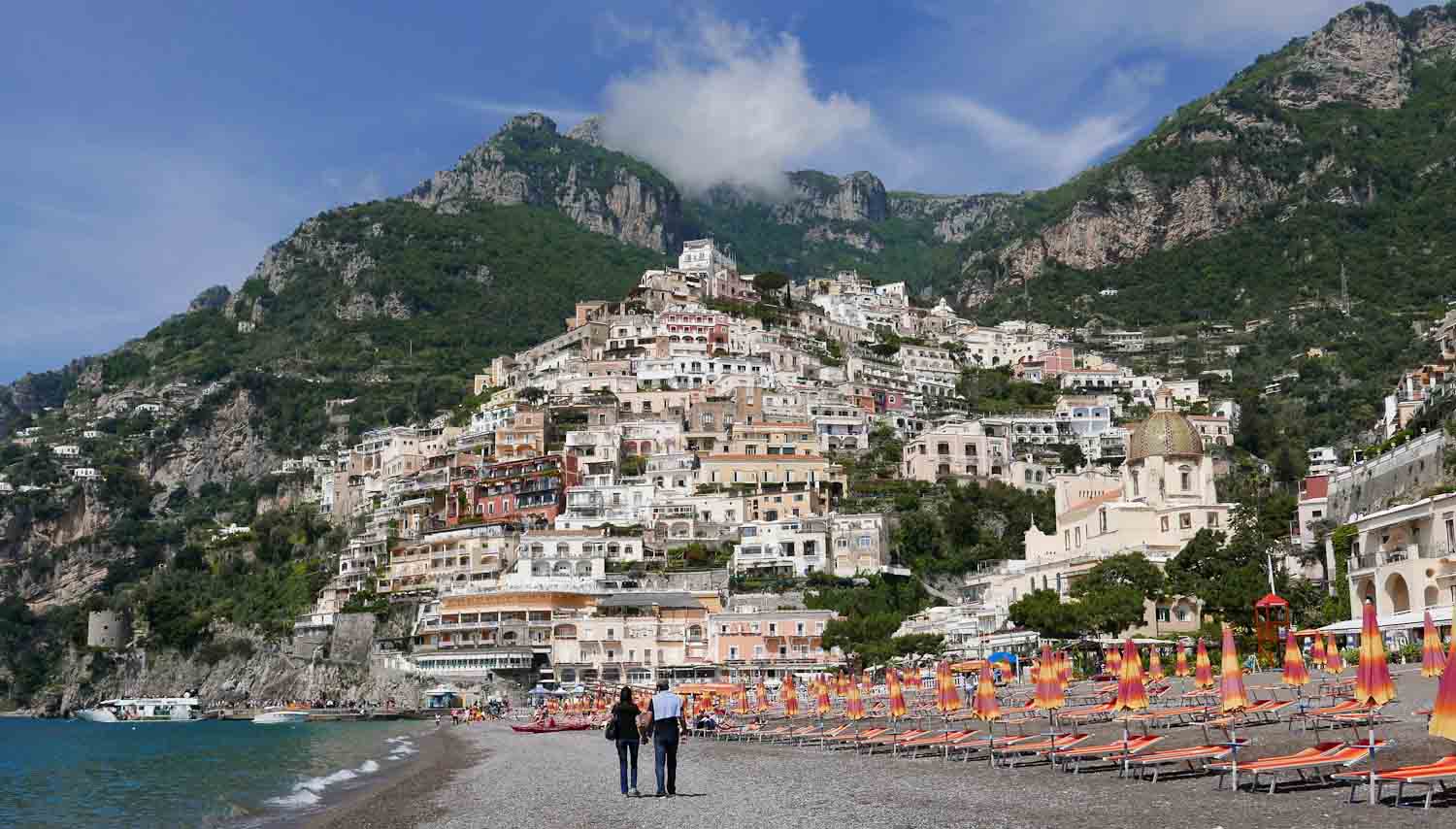 If Positano Were a Film

If the small villages on the Amalfi Coast were a film, they would be classified as romantic comedies in the best Hollywood tradition. Positano is one of those feel good places with massive star quality, a simple plot and a happy ending. We went out looking for the storylines that capture Positano.


Before visiting Positano, we had encountered the town in movies like ‘Only You’, ‘The Talented Mr. Ripley’ and ‘Under a Tuscan Sun’ and seen it eulogiesed by the great American author and screenwriter, John Steinbeck. In his words:

“Positano bites deep. It is a dream place that isn’t quite real when you are there and becomes beckoningly real after you have gone. Its houses climb a hill so steep it would be a cliff except that stairs are cut in it. I believe that whereas most house foundations are vertical, in Positano they are horizontal. The small curving bay of unbelievably blue and green water laps gently on a beach of small pebbles. There is only one narrow street and it does not come down to the water. Everything else is stairs, some of them as steep as ladders. You do not walk to visit a friend, you either climb or slide.” John Steinbeck, Harper’s Bazaar, May 1953 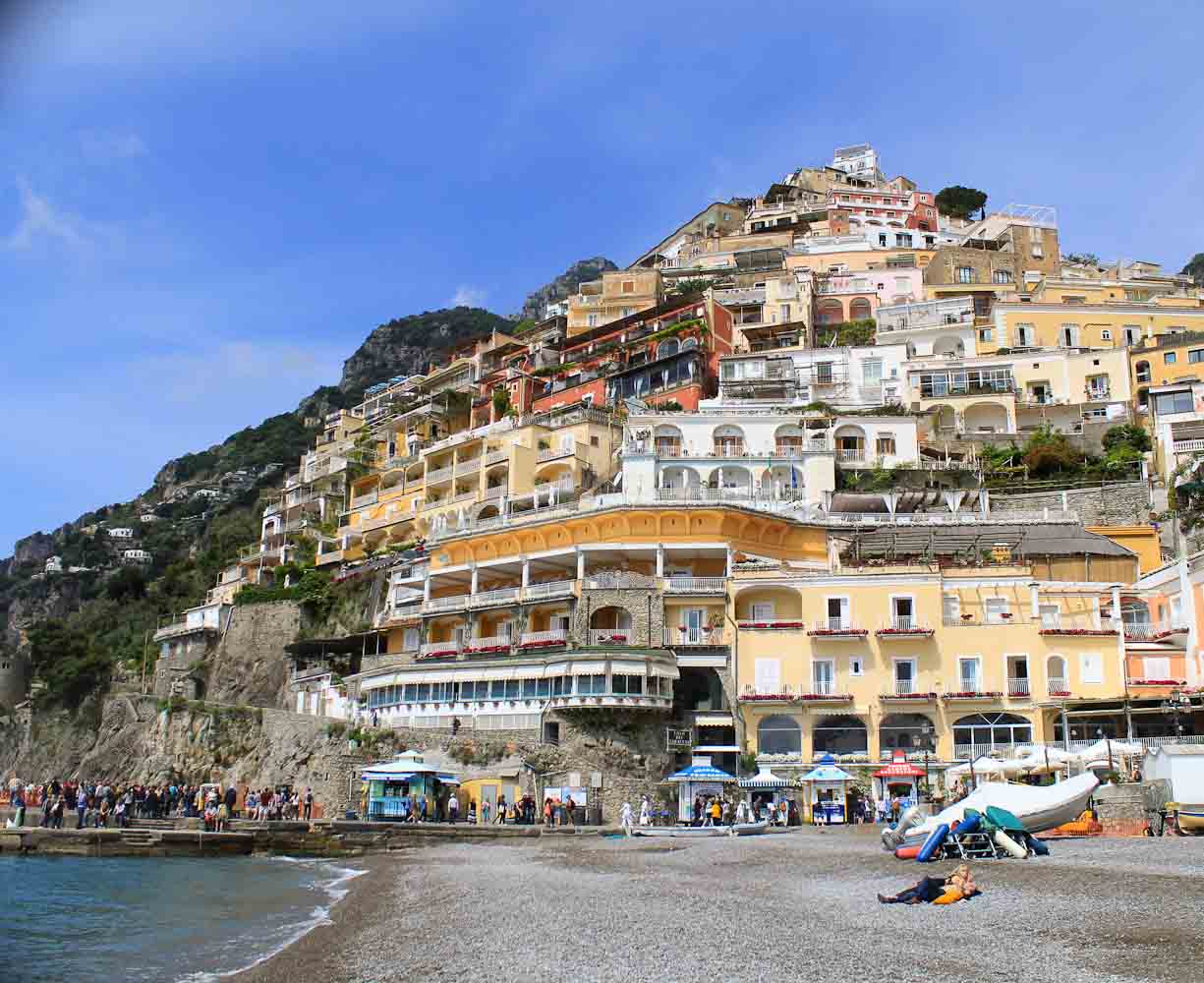 Houses make up a hill on the left side of Positano seen from the beach.

Starting with a Happy Ending

With this description in mind, we headed straight for a vertical experience, inadvertently watching the film that could be Positano backwards.

It was mid-morning and the ‘downtown’ area was slowly waking up to a new day. While waiters sat their outdoor tables for the lunchtime pizza rush, the first souvenir hunters were out and about in boutiques selling organic limoncello, ceramics, flax linen clothes and arty oil paintings of the picturesque village by the deep blue sea.

Not wanting to have my impression of this outstandingly beautiful and evocative town marred by the mercenary manifestions of mass tourism, we disembarked from the boat, and took the first way out.

To the left, the steep stairs were peaceful and sedate. We had the narrow path largely to ourselves and savoured the views of walled in lemon trees, ancient gates and archways framed by not yet blossoming bougainvillea and wisteria, nostalgic signposts, hidden stairs that seemed to drop vertically down the mountain side, and – whenever there was a low wall or an opening between houses – a lovely view of the coast with mountains folding into the sea; strata of white, yellow and red houses carved into the rock, and in the centre of it all a tiny shingles beach and the proud Church of Santa Maria Assunta with its colourful majolica tiled dome.

At that point, it seemed entirely plausible that Positano had been named after and founded by the Greek king of the sea gods, Poseidon, in order to impress and woo the sea nymph Pasithea. A place where everything turns out for the best, as in a perfect happy ending. 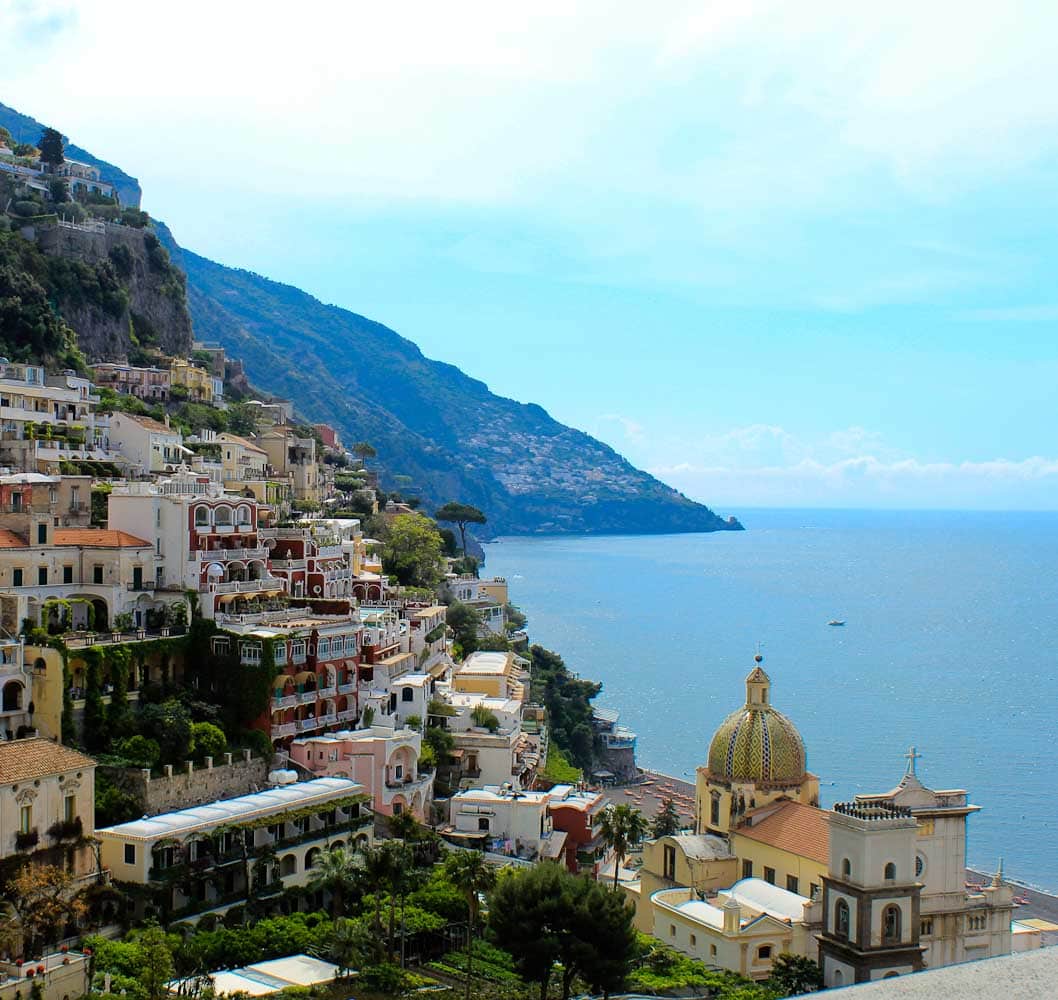 A view of the Amalfi Coast towards Salerno.

Emerging from the stairs on Viale Pasitea, we found a café with a belvedere terrace and sat down over a frothy cappuccino. Some of the other guests were on kiss and hugging terms with the owner, but their accents revealed they were not Italian.

Across the great divide that makes Positano spread out like the wings of a butterfly, I tried to identify the hole in a mountain near Montepertuso. According to legend this hole symbolizes another of Positano’s founding legends.

It is said that in the sixth century, the inhabitants of a small mountain community were startled by a loud clap of thunder. They turned their heads towards the mountain and saw a dazzling white light with an image in the centre that turned out to be a young girl. In a motherly tone she told them not to be afraid anymore. The devil had been expelled from the mountain and the evil spirit destroyed. As proof the devil’s snake-shaped body had been imprinted in the stone and the mountain was pierced by the index finger of the Madonna.

In order to see the evidence, you have to walk the 3 km up to Montepertuso il Buco. Such miracles are obviously not visible from a distance. 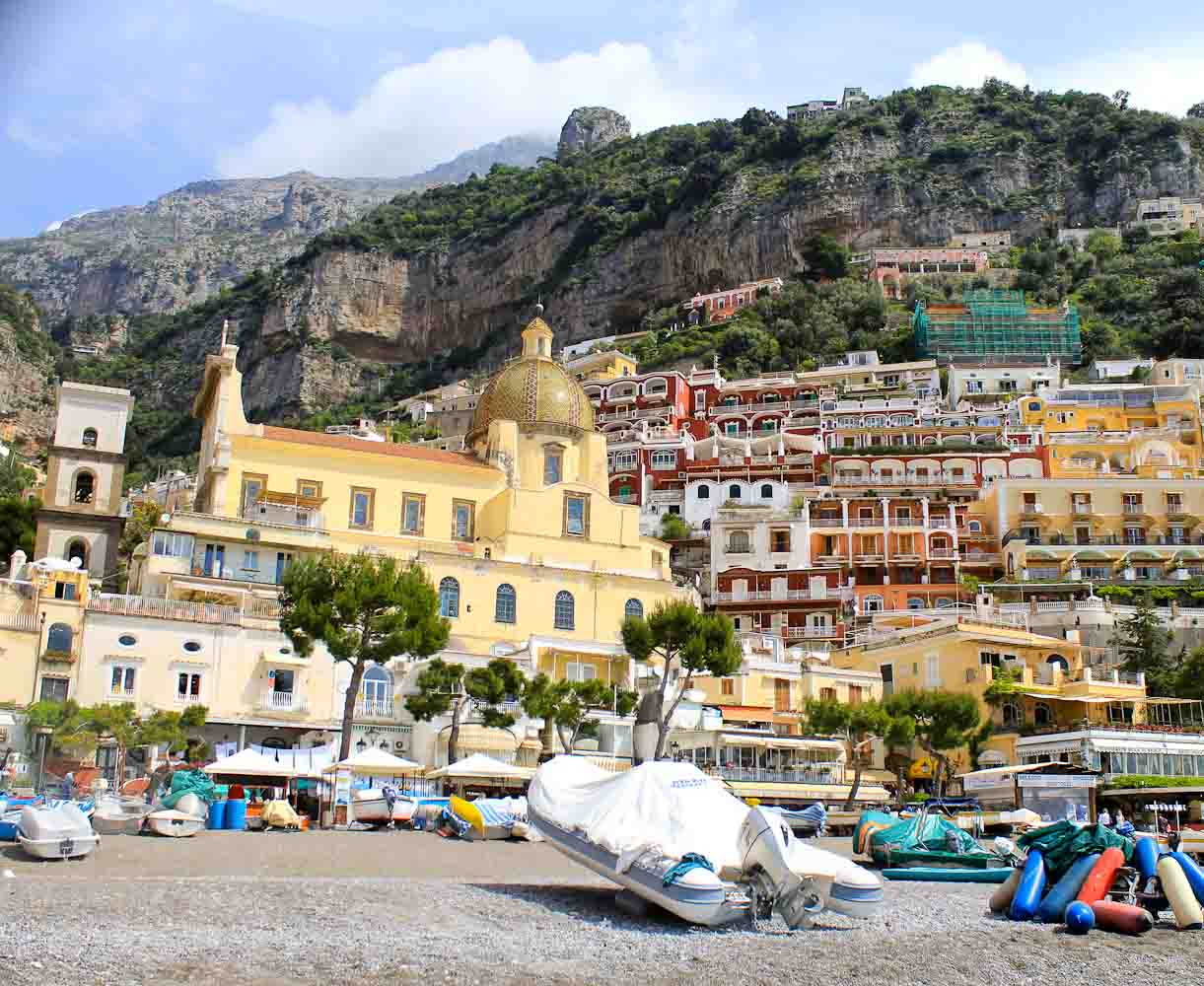 Supernatural occurrences determined the positioning of the church.

One of the ‘must-dos’ in Positano is celebrity sightings, so I kept my senses open. From the gossip columns you get the impression that you can’t go to the beach in Positano without stumbling over Katy Perry’s sun lotion, and that every Martini glass or hotel bed has been blessed by the presence of stars like Picasso or Michael Jordan. This day, however, I did not see anything more glamourous than windbreakers and sensible shoes. I suppose the rich and famous have better things to do than waking up and down the road which – to quote Steinbeck – was “carefully designed to be a little narrower than two cars side by side”.

Still, we did come face to face with the legendary Byzantine Madonna, who represents Positano’s third founding myth. The golden portrait placed above the altar in the main church was brought to Italy on a ship around the twelfth century. In the waters south of the Sorrento peninsula, the sailors heard a voice that said “Posa Posa” or “Stop in that place there”. The voice seemed to come from the painting, so the sailors gave the name Positano to the village and took the painting to shore, where it was installed in a church. The next morning, however, the painting was found hanging on a myrtle tree near the sea. A miracle that led to the construction of a new church dedicated to Maria Assunta. The saint is celebrated every year on August 15th with a re-enactment of a Saracenic pirate attempt to steal the image. 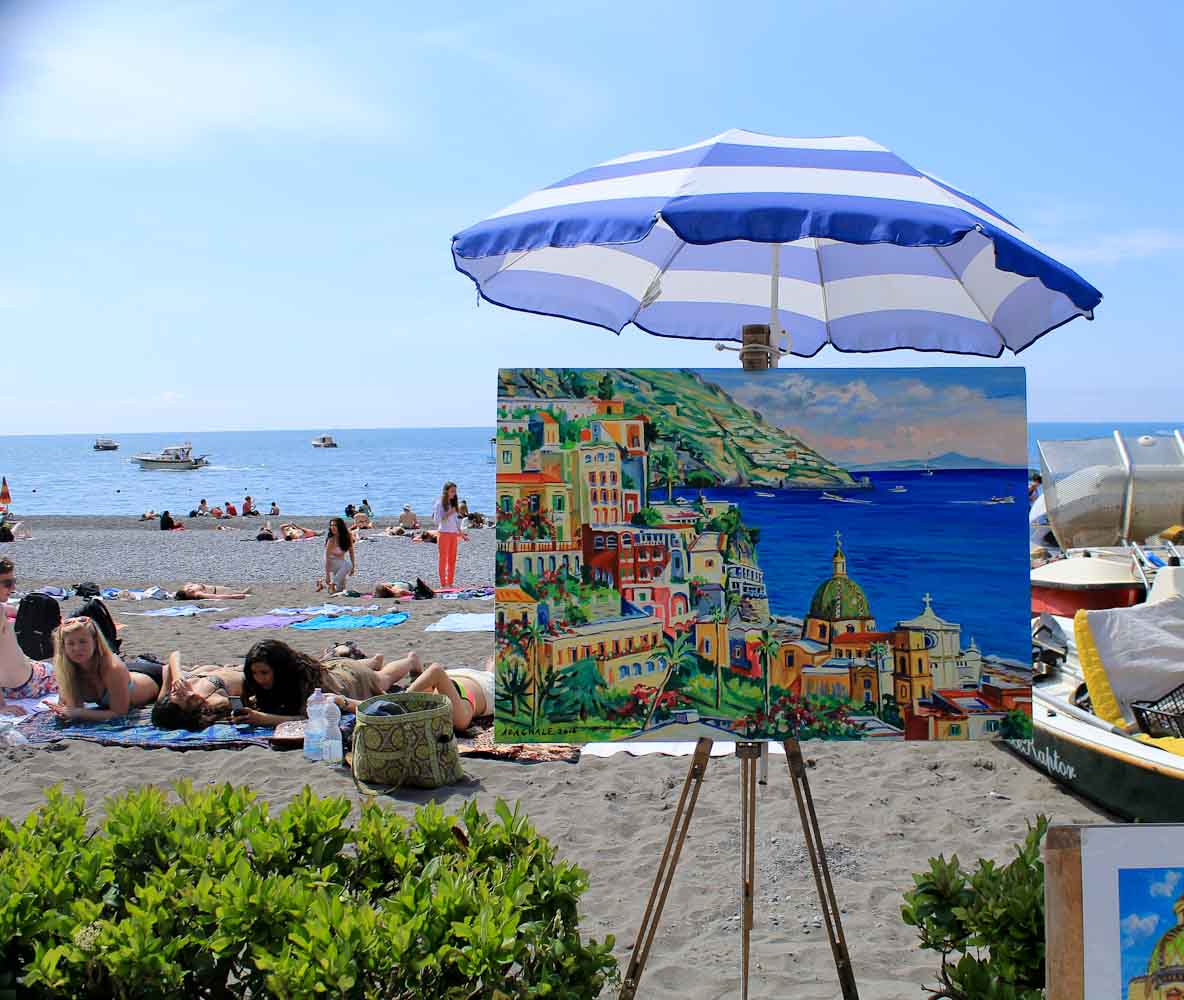 You can buy souvenirs everywhere in Positano

On the beach we were back at the beginning, where tourists are faced with the choice between the two sides of the village. Those who hadn’t yet made up their minds were still hanging around by the waterside.

Some local boys were trying their luck with a fishing rod, while groups of young people gathered to soak up the sun or prepared to go on boating trips to Capri or the dolphin shaped Galli Islands off the coast.

Positano is not the most action-packed destination. There is not a lot to see and do once you have checked out the shops and visited the religious monuments. Still, it is the perfect location for a recreational holiday centrered on the good life with a hike and a swim in terms of exercise, time for contemplation and lots of food and drink in the company of family and friends. In the end the beauty of Positano conquers all.