How to Enjoy the Attractions of Pistoia

The attractions of Pistoia include fascinating historic buildings. A far-fetched theory. And a car-free town centre. In short, you have all the charms of Tuscany, apart from the maddening tourist crowds.

It was the far-fetched theory that made us stay in Pistoia for a few days. I had read that the town some 30 km north-west of Florence had given name to the pistol, which was manufactured by local gunsmiths and armouries in the 16th century, and wanted to check out whether the town was still up in arms.

A History of Violence

Before we proceed any further, it should be mentioned that the Pistoia-pistol theory has never been verified. In other words, it’s probably bogus, but it is true that 500 years ago Pistoia was an anarchic, violent place, when rivalling clans butchered each other in the streets. In fact, some people from other parts of Italy thought that Pistoians were a particularly barbaric breed with an inherent viciousness.

The painter Michelangelo (1475-1564) captured the sentiment (or the prejudice) in a letter, where he wrote

‘I have your letter, thank you, as received,
and I have read it many times, at least a score,
It’s clear you don’t need sharper teeth, any more
than one stuffed to the gills needs food. And since
I saw you last I’m assured, having more than hints,
you have Cain the killer himself for ancestor,
and that in your blood generic traits still fester:
if fortune befalls another, you feel aggrieved.
Jealous, conceited, enemies of heaven,
a neighbour’s kindness sets your teeth on edge,
you Pistoians, self-destructive, eye askance
on every virtue. The great Poet even
saw the truth.

Testimony like this, still gives Pistoia a certain thrill that nearby Lucca lacks, even though the last five centuries in this part of Tuscany have been marked by relative peace and tranquillity. 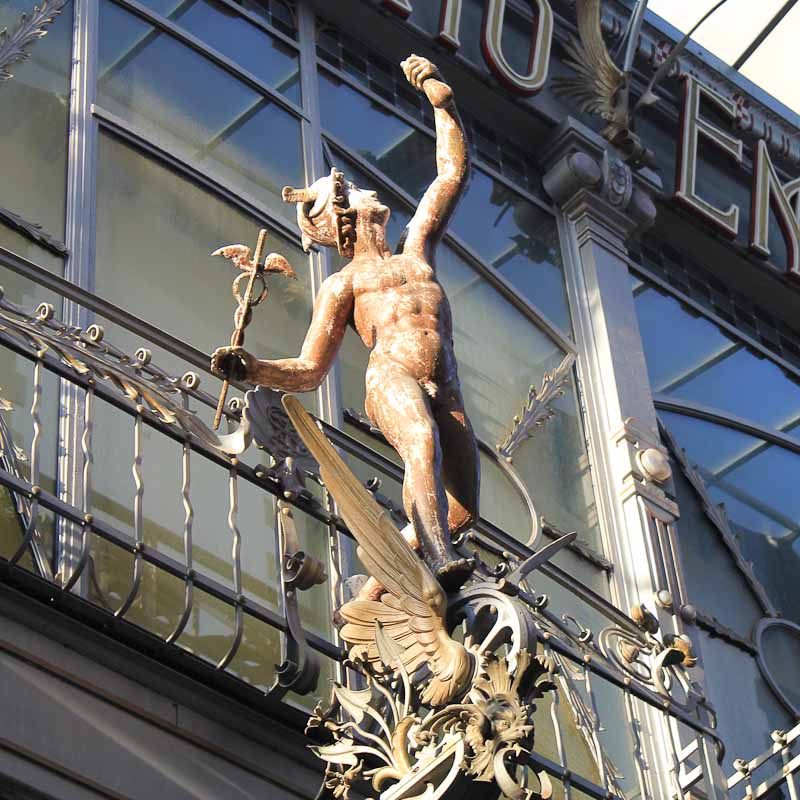 After having parked the car in a garage outside the ZTL-zone and been installed in the cosily cluttered, family-run Canto alla Porta Vecchi a right in the centre of town, we went out to look for some action.

By Italian standards, it was a chilly evening out of season, and most of the locals had the good sense to stay at home. We had the narrow medieval alleys more or less to ourselves. We started out looking for a possible place of strife Via degli Orafi where the goldsmiths used to reign, but found only a golden example of Italian Liberty Style and a volatile Roman god.

Galleria Vittorio Emanuele was fronted by a flying Mercury with his chick winged helmet and caduceus. In ancient Roman mythology, Mercury was the patron god of financial gain, commerce, eloquence, poetry, messages, travelers, luck, trickery and thieves, which more or less covers us all.

He was also the guide of souls to the underworld, which wasn’t where we were heading, so we turned left through a street of lilies and ended up in Via dei Fabbri, which used to be the blacksmiths’ domain. I didn’t see any workshops forging knives or pistols behind the protection grills and roller shutters that lined the street, and there was no animosity lurking anywhere.

The historic tensions among Pistoians had clearly been abandoned centuries ago. Along with the practical medieval custom of naming streets by trade or occupation. 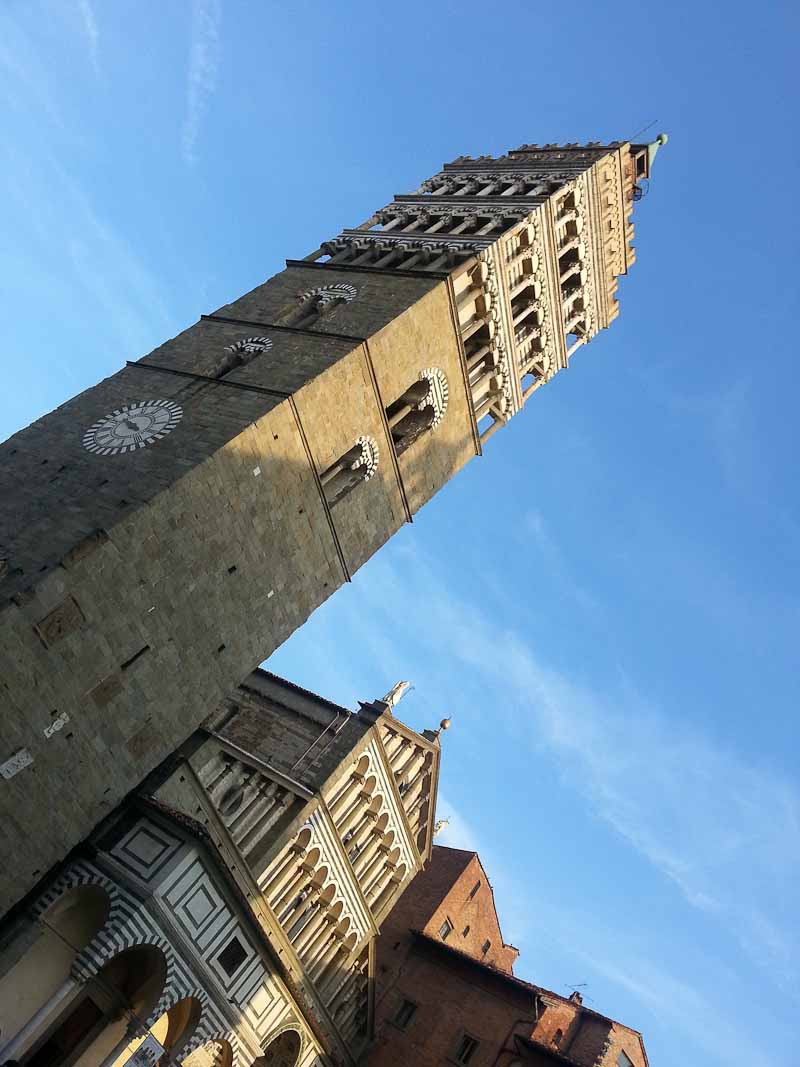 The Unspoiled Wonders of Piazza del Duomo
From the maze of restricted passageways, we reached the wonderful Piazza del Duomo, where pure family bliss took over with lots of children playing catch and chasing pigeons. There were no outdoor cafés or restaurants around, so we sat down on the steps of a Gothic palace and took in the magnificent square that must be one of the most unspoiled beauties in Tuscany.

To the right the spiritual side of Pistoia was massively present with a cathedral, baptistery and bishop’s palace, while houses exhibiting power and wealth lined the northern side of the square. In the middle, there’s a typical Ghibelline type bell tower with swallow-tailed crenellations.

According to the tourist office on the ground floor of the Bishop’s Palace, you are welcome to climb the 200 steps to the top of the 67 metres high campanile. From there you might try to convince yourself that you can see the outline of Florence in the distance. 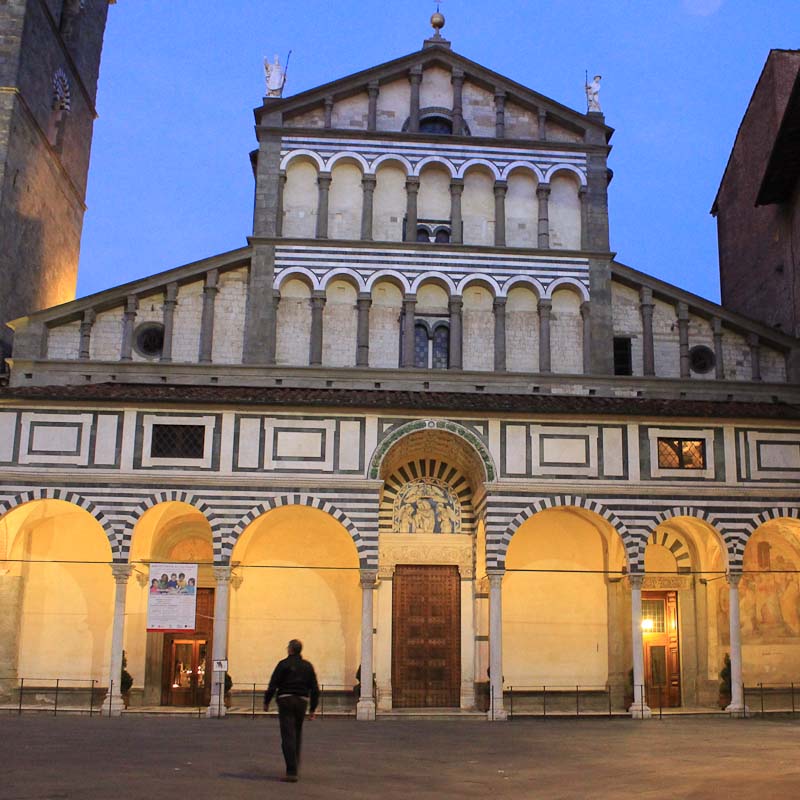 St. Zeno Without a Coat
I preferred to stay grounded and marvel over the octagonal baptistery with stripes in white and green marble. The ancient bishop’s palace that is half mansion and half fortification displaying the bishops’ coat-of-arms between the lancet arches of the loggia. And the 12th-13th century cathedral, where the patron saints St. Zeno and St. Jacopo guard over the incredible silver altar of St. Jacopo and welcome pilgrims passing through, while hiking along Via Francigena.

Unfortunately St. Zeno also known as Saint James of Verona did not wear his woolly red coat. Every year for the patron saint’s day on 25th July, the statue on top of the cathedral is dressed up as a hint to a legend saying the saint had worked as a horse dealer before his conversion. In this capacity, he bought horses on credit and promised to pay for them as soon as the hot weather arrived. To ward off his creditors he kept his hot, woolly coat on through the height of summer. 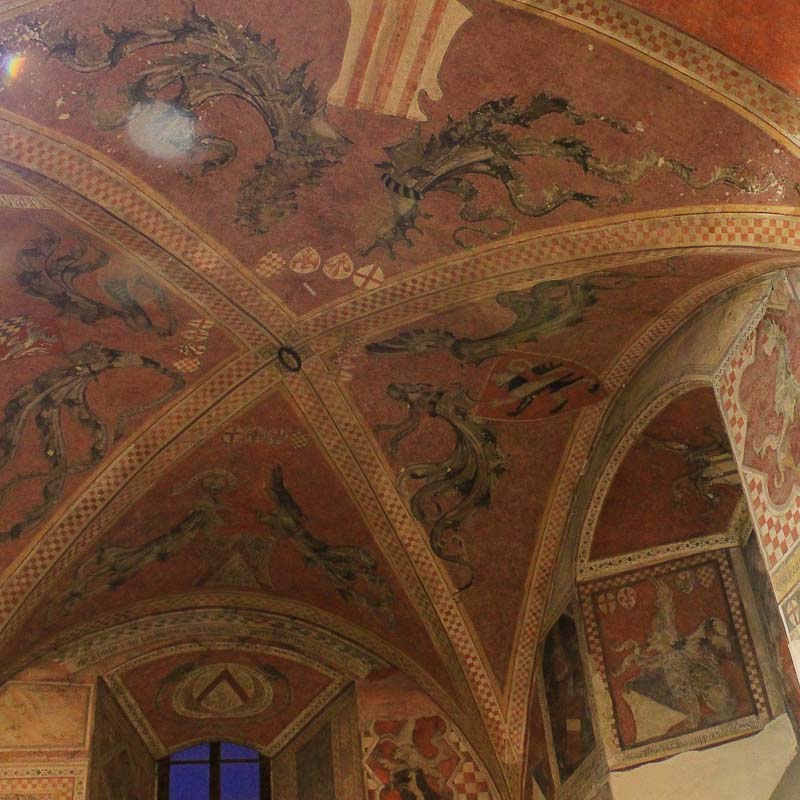 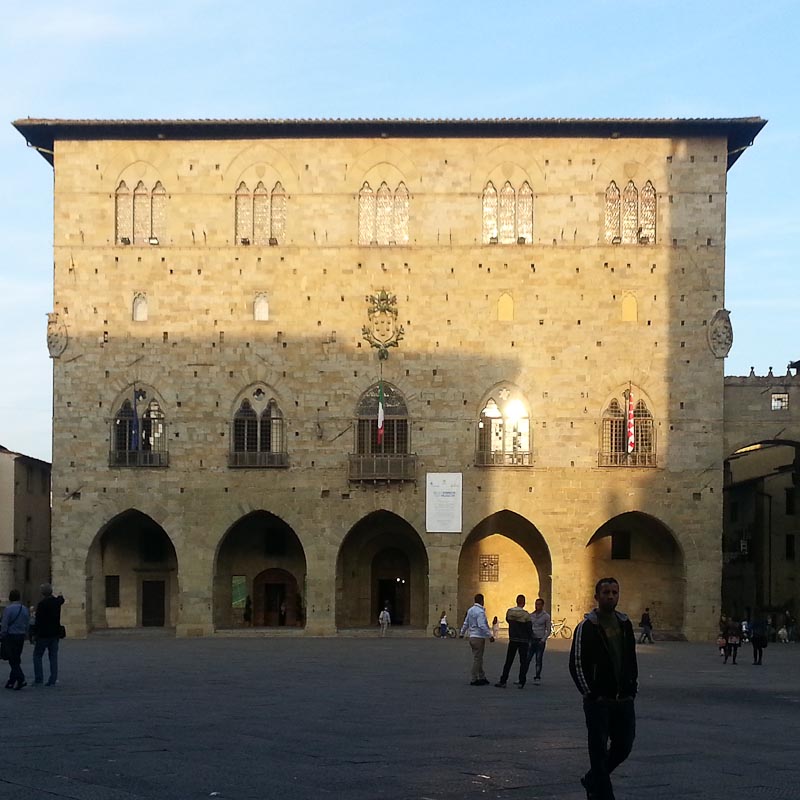 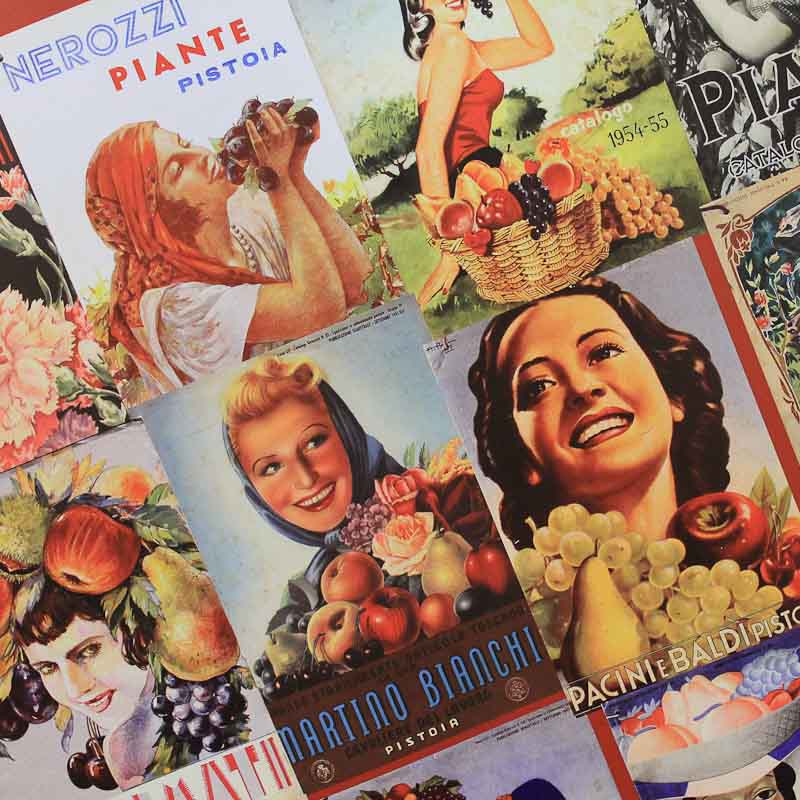 Flower Posters and Seed Packets
When we started to feel cold too, we went into Palazzo Pretorio that was open to the public and studied coat-of-arms in the densely decorated tribunal. The town hall in Palazzo degli Anziani with the Civic Museum offered more free entertainment. The museum displays a wealth of painted panels, frescoes and pictures from deconsecrated churches along with blueprints of the architect Giovanni Mechelucci, who designed the brutally modern Santa Maria Novella Railway Station in Florence.

There was also a contemporary exhibition about the farmers around Pistoia, who have specialised in the production of flowers and ornamental plants. There’s about 2 000 nursery gardens situated in the province of Pistoia, and their importance for the local economy was illustrated through a collection of historic photographs, posters and seed packets. 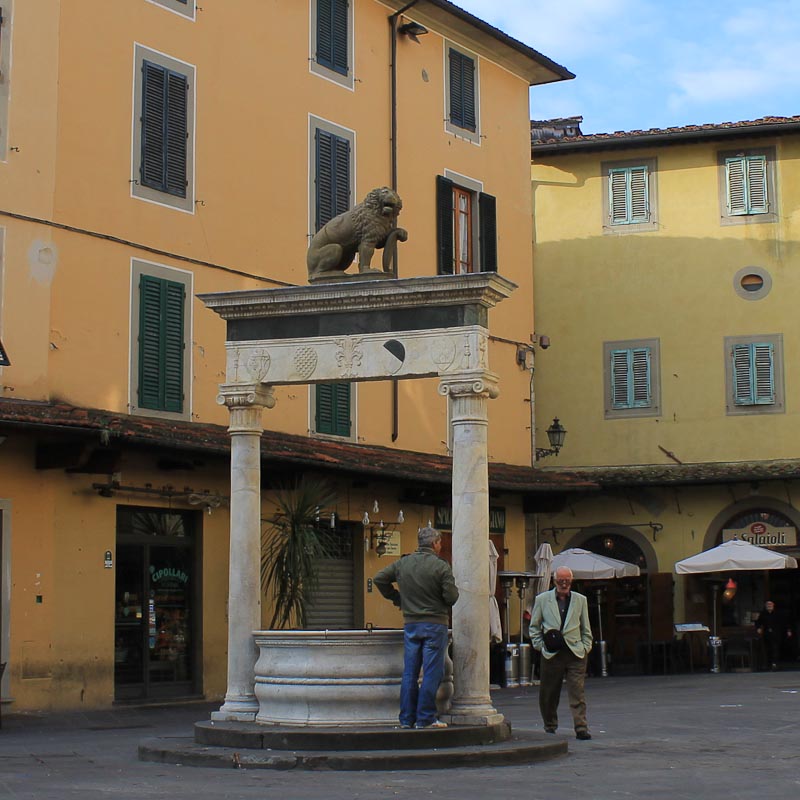 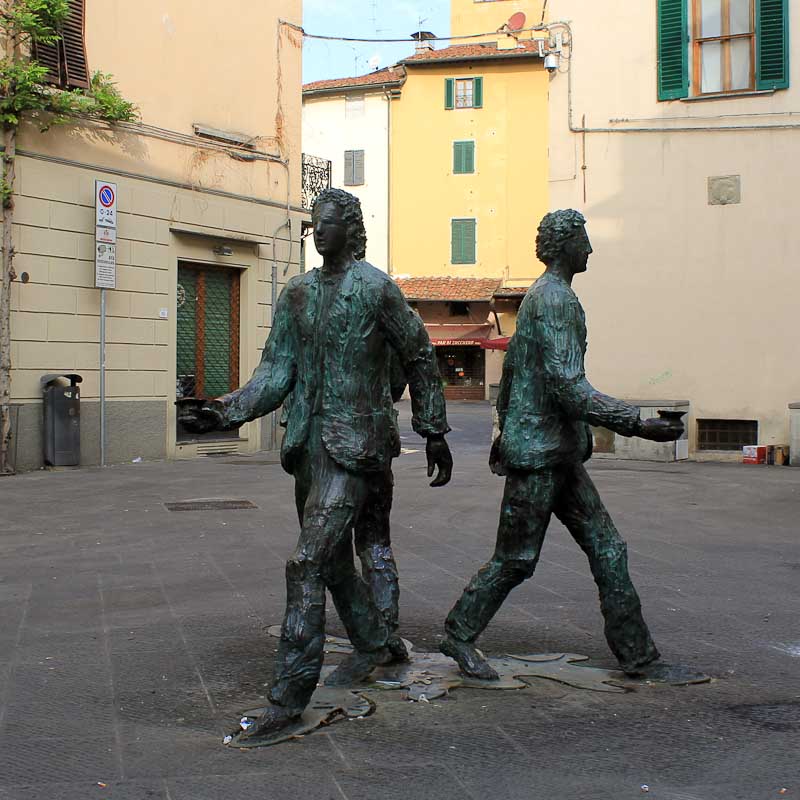 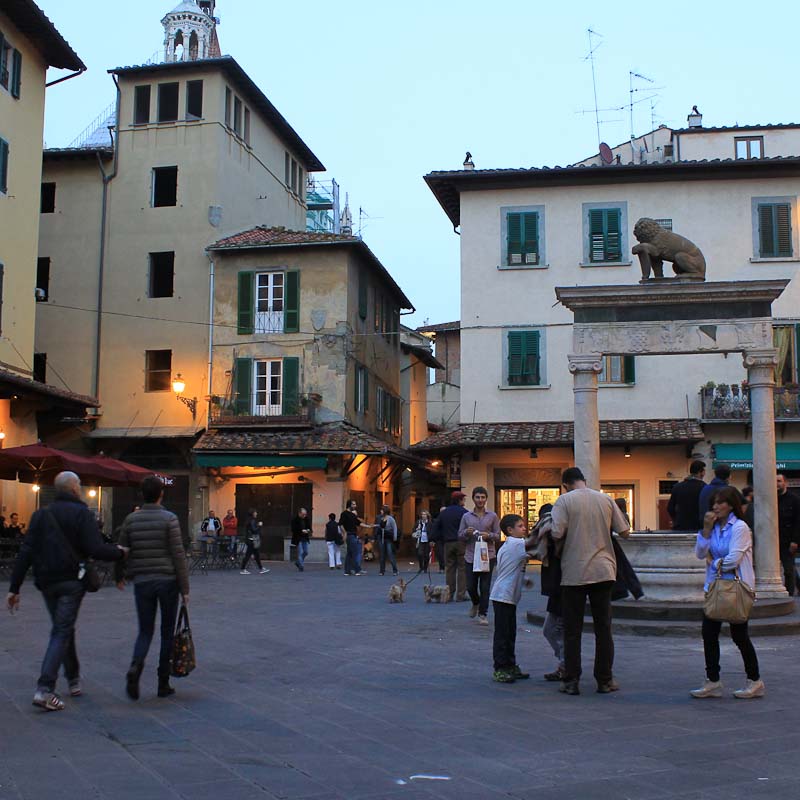 Night Out in La Sala

The evening ended at Piazza della Sala were several wine bars, cafes and restaurants are located. Compared with the Florence, the attractions of Pistoia include more modestly priced restaurants. And in the evening there’s a nice, intimate atmosphere with live rock and blues streaming out from the open doors of the cafes.

The next morning La Sala had shaken off the party crowds and transformed itself into a artisan market with various workshops along the fringes. In Medieval times this piazza housed a food market with the well in the middle that supplied water to nearby fish mongers and slaughter houses. The two columns by the well were used as support of a pulley to draw water. In 1529 an architrave with a sandstone Marzocco lion was placed above the well as an emblem of Florence’s dominance over Pistoia. Since then, the well has been know as Pozzo del Leoncino.

Another charming feature was the modern bronze statue of three life-sized men walking in different directions from the same point of departure. On busy days they tend to blend in naturally with the shoppers. 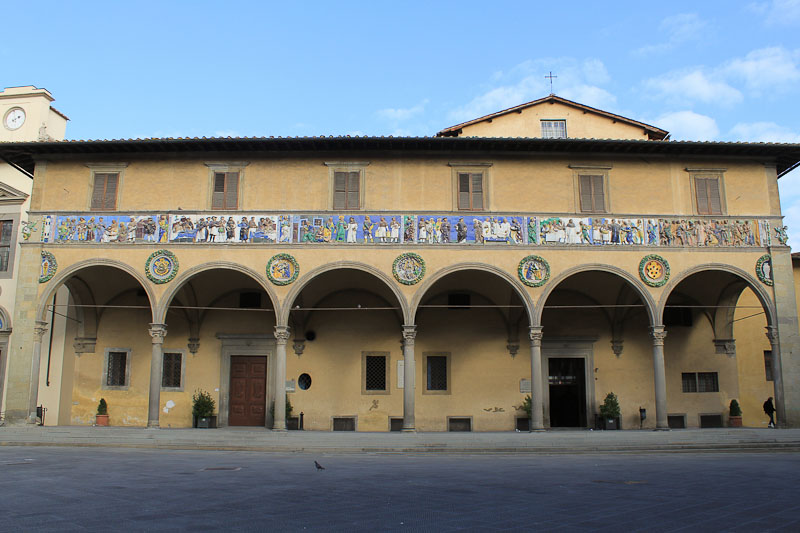 A Medieval Hospital
Over the following days we revisited the attractions of Pistoia several times over along with other main sights such as the Ospedale del Ceppo. The hospital was founded on donations received in the wake of an epidemic of the black plague that raged the city in 1348. For this reason it took its name from the collection box (ceppo). It was in use up until 2013, when a new city hospital was inaugurated

Ospedale del Ceppo’s claim to fame is embedded in the facade with a frieze of seven ceramic panels representing the virtues of mercy ie. feed the hungry, give drink to the thirsty, clothe the naked, bury the dead, shelter the traveller, comfort the sick, and free the imprisoned. Six of these panels are works of the Della Robbia workshop and their colours and the amount of detail are stunning.

You cannot visit the inside of Ospedale del Ceppo, but it is possible to have a guided tour of “Pistoia Sotterranea” where you will see the smallest anatomic room in the world, an exhibition of surgical instruments, 650 m tunnel and a secret underground passageway.

At this point, my curiosity had been cured and I was“stuffed to the gills” with the attractions of Pistoia. And the altruism and mercy demonstrated on the hospital wall seemed to contradict all theories of inbred brutality. We spent the rest of our visit in Pistoia strolling around the car-free town centre with no obligation to see anything in particular. Which in itself was thoroughly enjoyable.

Chicken with Lemon and Garlic 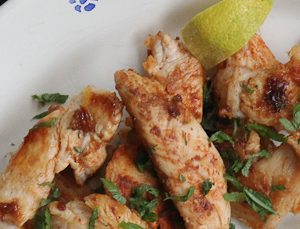 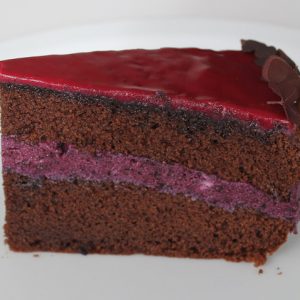