A photographic poster of  waterfalls and green lakes in a deep, limestone canyon first drew me to the Cavagrande del Cassibile in southeastern Sicily. Unfortunately, the most trails into the canyon have now been closed.


The picture showed a series of waterfalls and untouched green lakes in a deep, white limestone canyon below the blue summer sky, as a blissful natural attraction among innumerable cultural sights. Nonetheless, there was no reference to the place in the brought along guidebooks, and first after consulting the locals we drove off on a narrow country road in the direction from Avola to Palazzolo.

Not in those shoes

The road climbed up to Avola Antica and a magnificent view 500 metres over sea level, and after about 10 kilometres we encountered a line of parked cars and a helicopter pad marked with a circled H. A couple of shacks indicated some sort of action, and suddenly people emerged in rather large numbers considering the deserted feeling of the surroundings. Most of them were panting and sweated profusely, as if they had just completed a major sports achievement, but I did not pay much attention. It was after all four o’clock in the afternoon on a hot Sicilian summer day.

We went with the flow to buy a bottle of water, and lined up for the path that seemed to descend into the canyon. It was being guarded by a man, who instead of asking for an admittance fee, demanded to see our passports, carefully registering names and numbers. That done he stuck his head out of the shack window and looked at our feet. 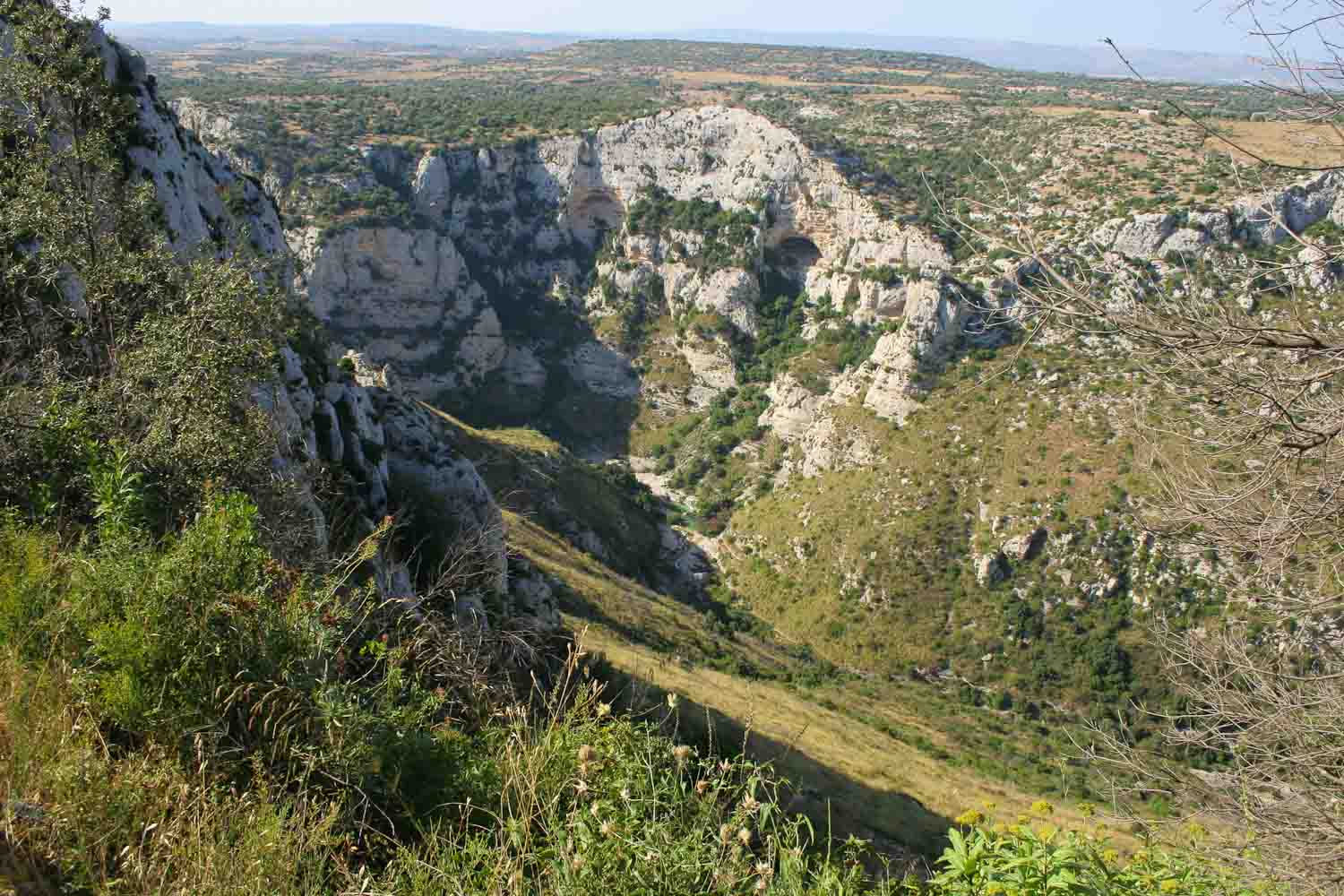 Deep down in the canyon you glimpse the enticing emerald lakes.

Luckily, he was a typical Italian anarchist, who did not mind bending the rules a little.

– But remember: You have to report back here before six and you won’t reach the lakes in less than 3 hours, unless you are in very good shape. Normally, it takes one hour to walk down and two hours to ascent, but never mind: In those shoes you won’t get far.

At the edge of the precipice I began to see his point. The path was a steep zigzagged line, where you sometimes had to jump from one high stone to the other, and people walking up looked utterly exhausted, parents coaxed complaining or crying children, and ever so often bottlenecks arose when someone had to stop for breath. And they all wore hats to shelter from the sun and sensible shoes.

Excavated in the canyon you could see caves, where the prehistoric Siculi tribe had their dwellings and burial places 1300 years AD. And wild orchids and other rare flowers mixed with the vegetation. Far below the view paid justice to the poster photograph with waterfalls and inviting lakes, where ant-sized people were taking a refreshing dip. 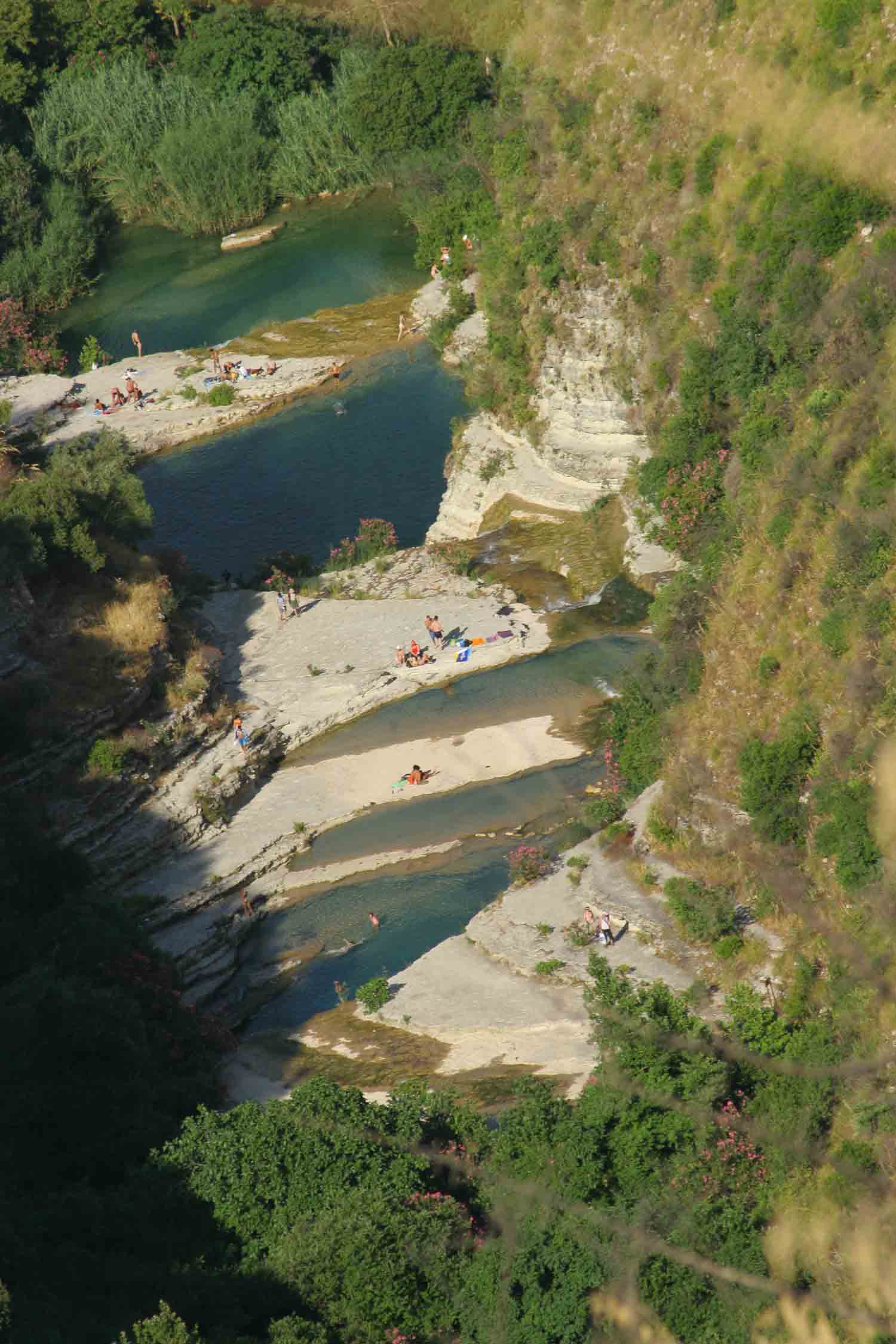 Swimming in the lakes comes as a reward on the three hour hike.

We went half way down, hoping the pearl sandals would last, and then we had to turn around to get back before closing time. Italians are not normally overprotective, so when they treat a natural reserve with such precaution and respect, I am convinced that the Cavagrande del Cassibile may pose real danger. Still, I am going back next time I visit this part of Sicily, and then I will start out early in the morning equipped with plenty of water, packed lunch, hat, swimming suit and sensible shoes.

Closed for the time being

After our first visit Cavagrande del Cassibile  has expedienced several safety issues. A huge fire in June 2014 destroyed much of the vegetation covering the sides of the canyon, and small landslides during periods with heavy rain makes it difficult to access the canyon. So far the region of Sicily has been unable to find funding for a restoration of the trails, which means that the most direct points of access, known as Scala Cruci, Scala di Mastra Ronna and the Mezza Costa trail are all closed to the public. No opening date has as yet been set.

This means that the only way into Cavagrande del Cassibile at present is via a natural path known as “Prisa-Carrubella”.