The Giunigi Tower in Lucca

If you climb up to the top of the Giunigi Tower in Lucca, you may see a mysterious lady sitting in the shade of an oak tree with her faithful dog.

In the Middle Ages, wealthy landowners in Tuscany and northern Italy manifested their wealth and power by building towers to their palace homes. The height and style of the towers along with the shape of the crenellations showcased the family’s position and served as defense structures and lookout posts, when things got rough. So very different from the convenience and comfort of today’s luxury accommodations in Tuscany.

A Symbol of Power and Wealth

Being on the crossroads of the silk trade, Lucca flourished after the turn of the first millennium. AT that time the town had 250 towers of which only 9 have survived.

One of the most remarkable surviving towers belonged to a family of successful merchants and bankers led by Francesco Guinigi. His family owned several palaces within the the city walls including Palazzo Guinigi that was built in red brick and timber around 1390 with four defensive towers.

The Giunigi Tower on the corner of via Sant’Andrea and via delle Chiavi D’Oro is the only one of the four towers to have survive the violent Medieval raids, ambushes and battles. With its crown of five living oaks is has become the symbol of Lucca, like the leaning towers are a symbol of Bologna. 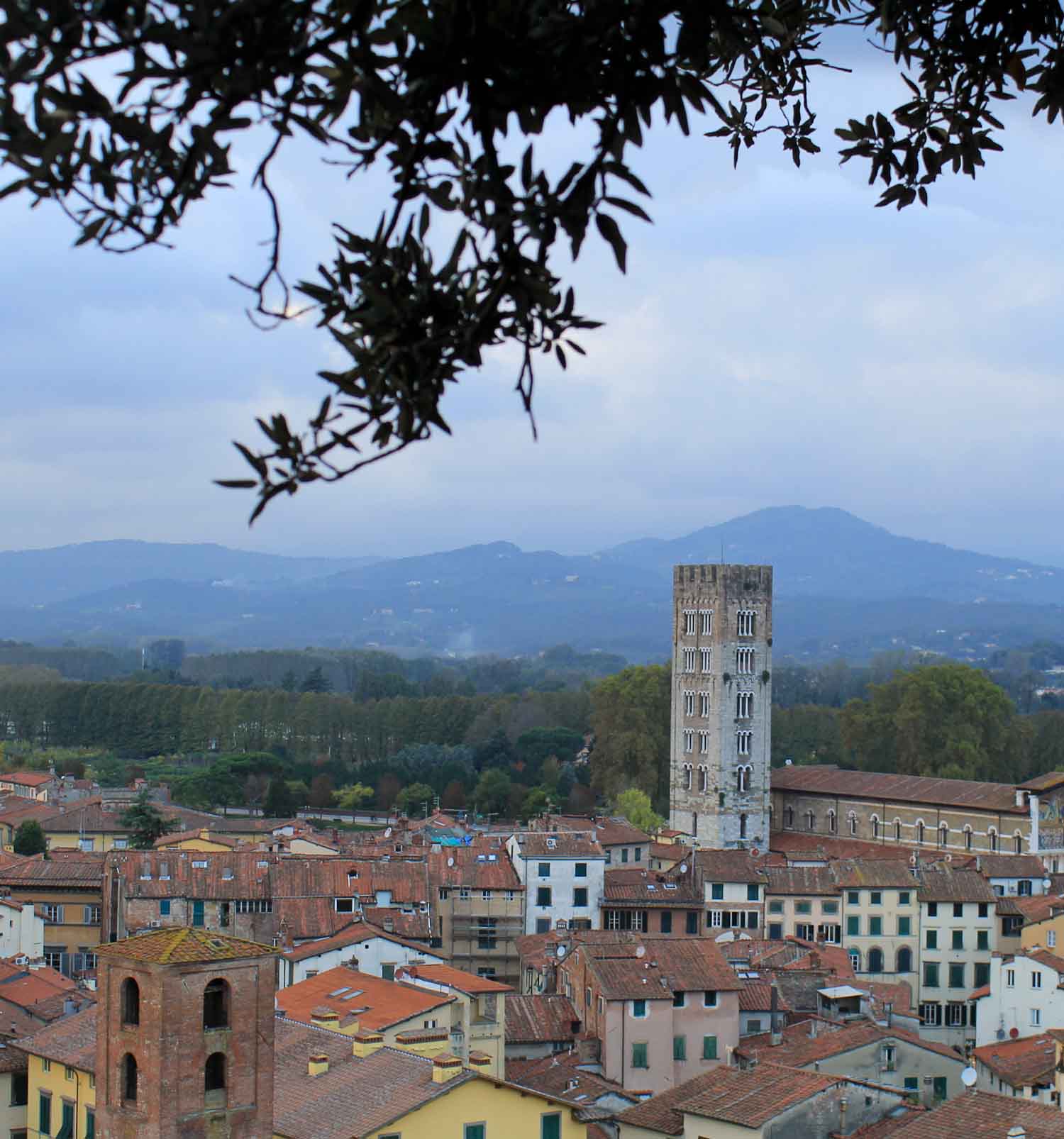 Why the Giunigi family wanted a rooftop garden remains unclear, but some people claim it was a kitchen garden catering to the needs of the kitchen on the floor below the top.

This would make sense during a siege, but having climbed the 25 flights of stairs and 230 steps to the top of the tower, I can’t help feeling sorry for the kitchen staff, who would have had to carry water and vegetables to an altitude of 44 metres before coming down with a meal balancing on a tray. Especially as the stairs at that time were not integrated in the tower, but attached to the outside. 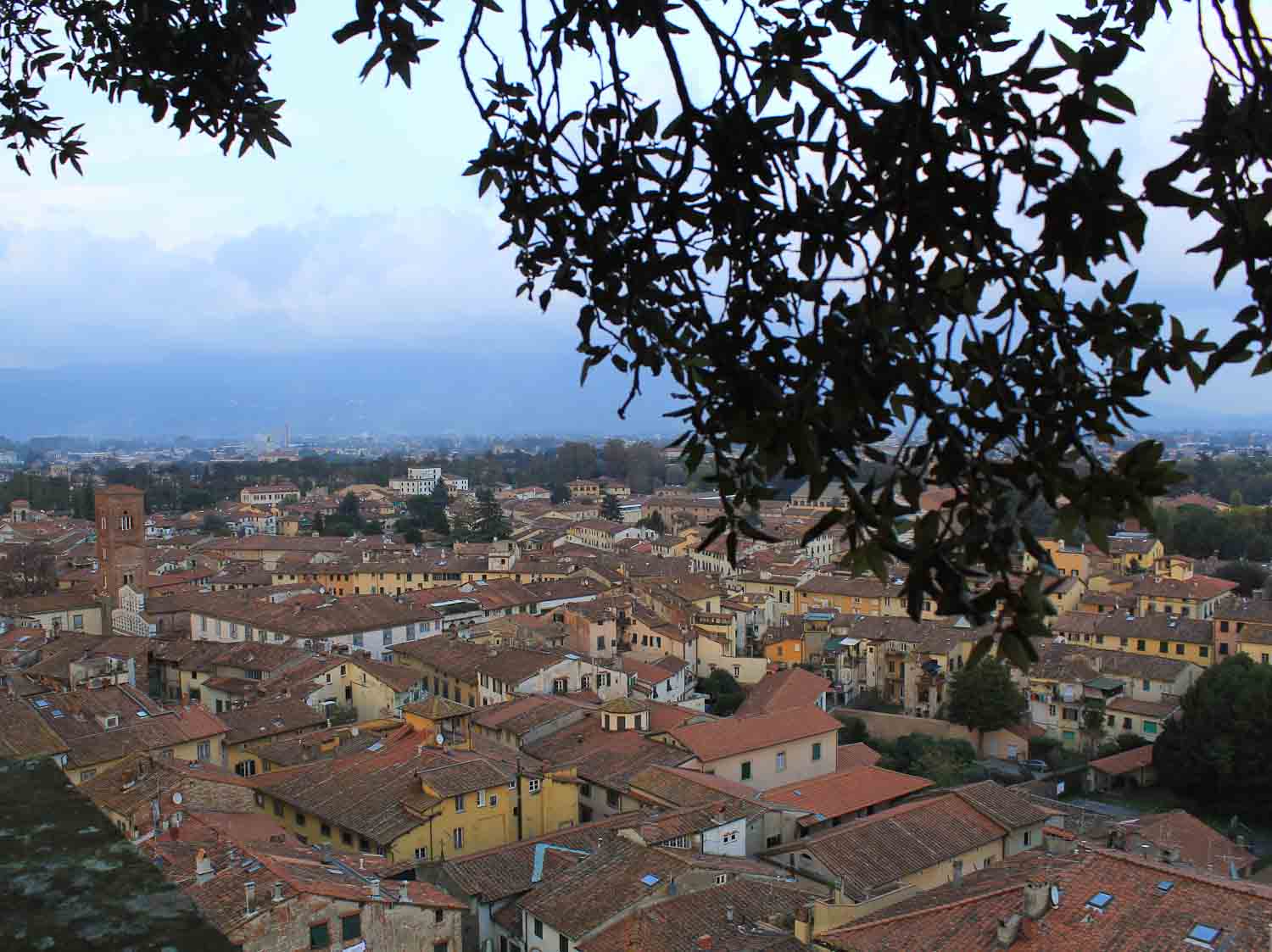 The old town of Lucca in the evening light.

The theory that the rooftop garden symbolised rebirth is more appealing. After all four of Francesco Guinigi’s seven sons died prematurely. Three from the plague and one by assassination. Of the remaining three sons, Paolo is the most interesting in relation to the tower.

According to a local writer Bartolomea di Monaco, Paolo Guinigi planted the tallest tree in the Giunigi Tower’s rooftop garden at some point around the time he married his first wife. The 11 year old wife died immediately after the wedding, and Paolo married his second wife Ilaria who gave him a son and a daughter.

If you visit the rooftop garden at a particular hour, and if you remain totally silent, you may be able to glimpse Ilary with her faithful dog in the light and shadow under the tree. And uncorrupted loving souls without envy, malice or jealousy may be able to elicit a smile from the beautiful lady. 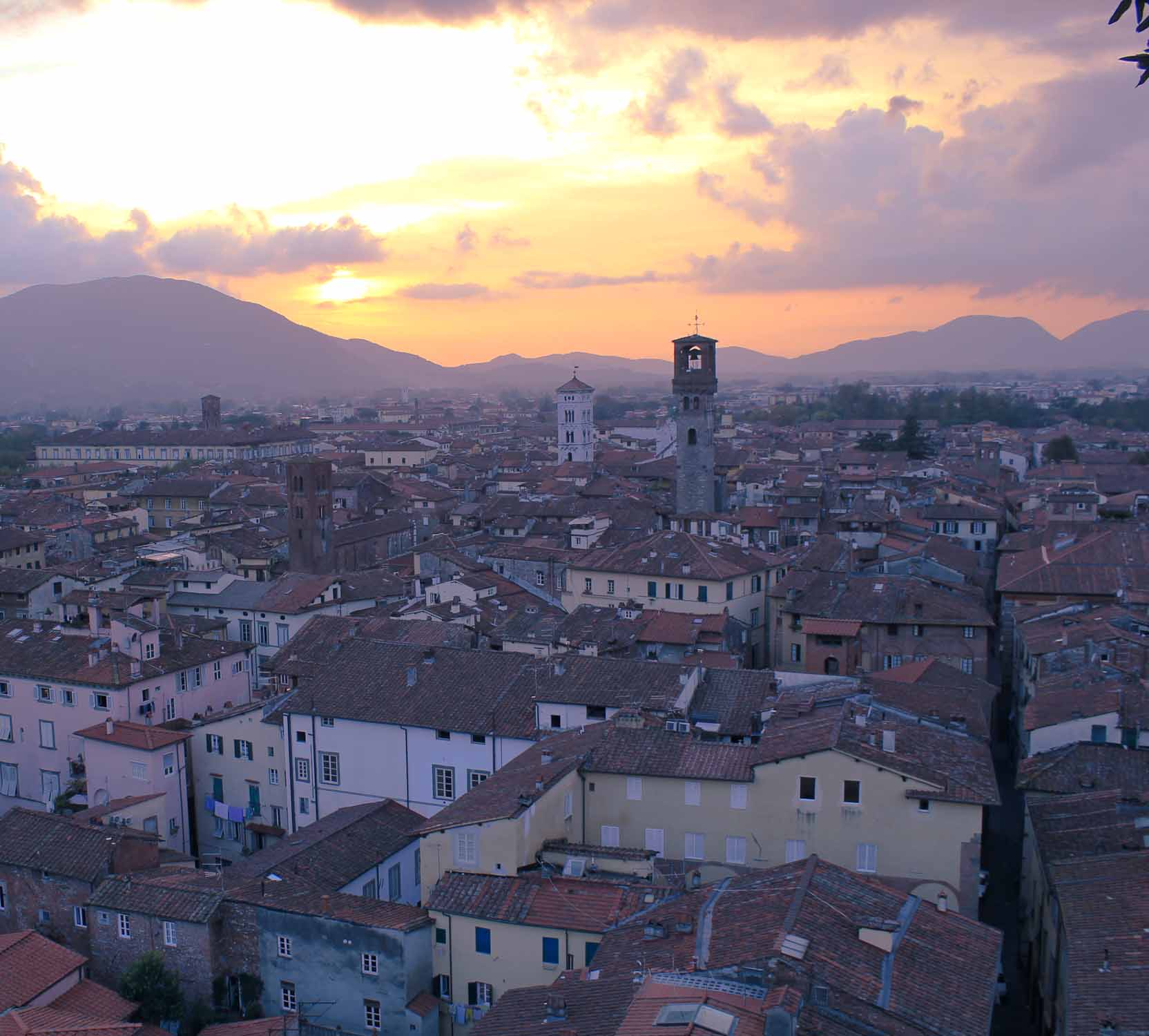 Seeing the sun set over the mountains.

The presence of Ilaria is not the only magic associated with the roof garden. Paolo was captured and incarcerated by Francesco Sforza in 1430. His death in prison two years later was first announced under the tallest rooftop tree, which immediately shed its leaves in grief and sympathy.

Today the tiny forest on the top of Giunigi Tower seems to follow the rules of nature, and whether from lack of innocence or bad timing I personally did not catch a glimpse of Ilaria and her smile in the shadows under the tree. But I did see the town of Lucca from above and the mountains surrounding and protecting the city. With a view like that is suddenly makes sense to extend the family home with a 44 metre tall tower like the Torre Guinigi. 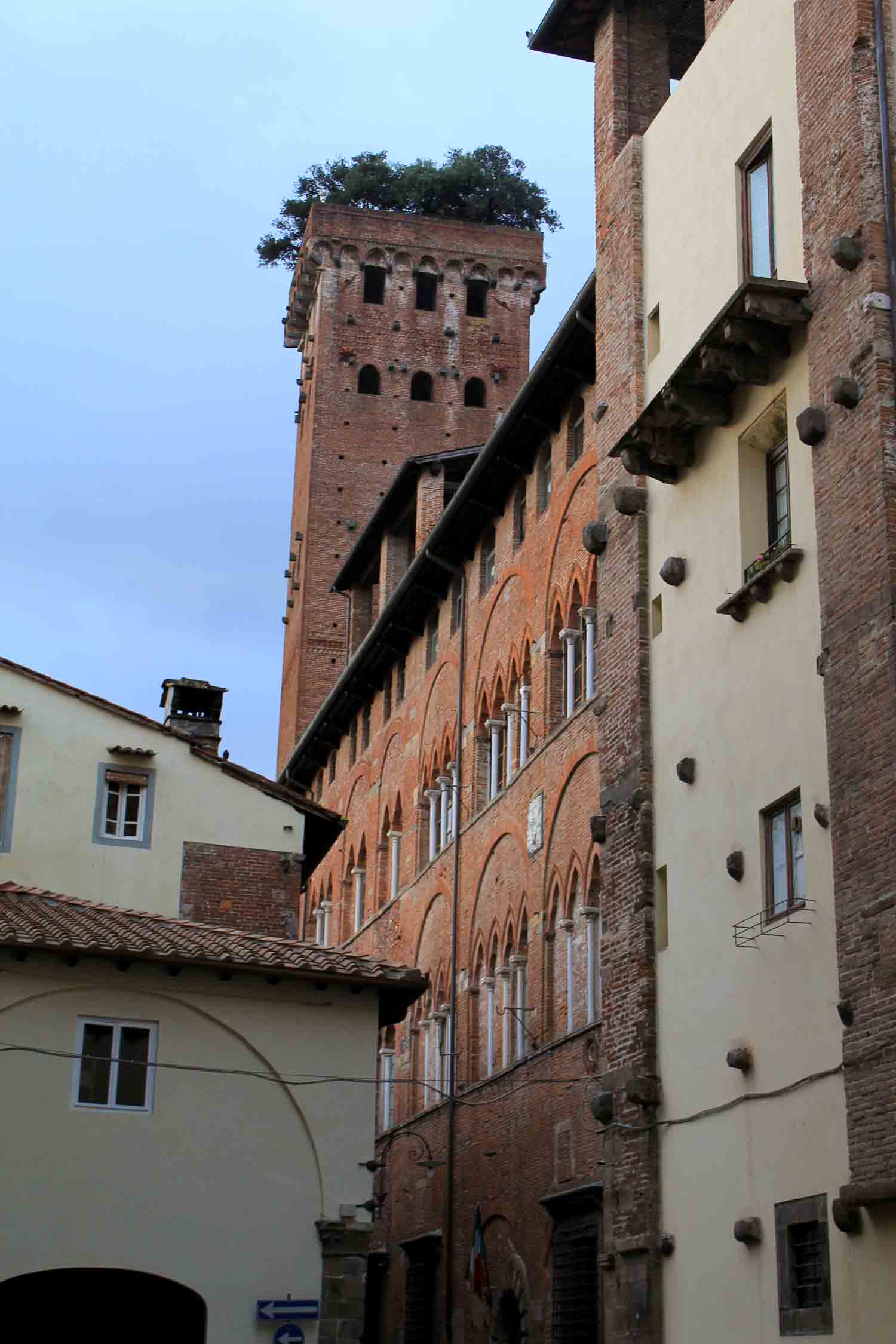 The Guinigi Tower in Lucca with the characteristic rooftop garden.