Some encounters with Italian police representing some of the eight national police agencies and 324,339 active police officers.

The beach bar down the corner had hired a one-man band, who gave a tolerable impersonation of Jovanotti, Zero Assoluto, and Tiziano Ferro by means of keyboard and microphone. The volume was turned up loud, and a about a hundred young people had gathered on the pavement, eating ice cream, drinking beer and chatting without the slightest sign of trouble. We stood with a cono in the middle of the crowd and enjoyed the atmosphere, before it was time to go home. It was all very pleasant and undramatic.

The next morning at breakfast a Roman tourist vented his frustration:

– Can anyone tell me why the police had to break up the street party last night? I was standing on the balcony and heard how the youngsters were sent home, while the bar was ordered to turn off the music. Why do the police intervene with these things? Young people should be allowed to be here, and it is much better for them to listen to music, than death driving on the road along the beach. Berlusconi’s security package has given us more police on the streets, but they don’t take action against speeding and drunk drivers who are really making life dangerous for themselves and others.

The roman’s outburst made me aware of a possible connection between the newly passed security package, the Berlusconi government’s law-and-order policies and this year’s extremely visible policing. I have never seen Italian police as overtly conspicuous before, but this summer policemen were everywhere. 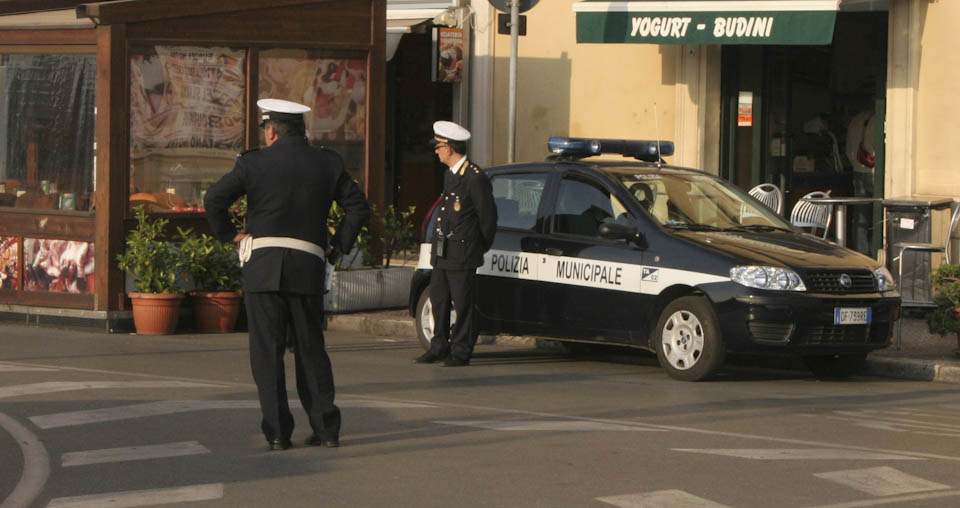 It started at the Brenner Pass border, where passport control had been restored temporarily. This was allegedly due to security reasons during the G8 meeting in L’Aquila, which was understandable, but it did not explain the massive police presence on roads, in parks, town squares and beaches throughout the nearly 20 Italian cities from north to south, I have visited over the last month. The Carabinieri, Guardia di Finanza and representatives from the other six Italian police forces were visible everywhere. It had suddenly become evident that Italy with eight police agencies and 324,339 active officers is the country in Europe with most police per capita.

Apart from the heated Roman, the musician and the young people at the beach bar, the immense police presence does not seem to bother the Italians, unless they fall victim to the new policy of issuing fines for illegal parking speeding. People in general seem to get along fine with the local polizotto who knows all the weirdoes and strange characters in town.

There may, of course, be others like me, who are frightened at the sight of the cross belt and Beretta that make up standard Italian police equipment, but this is strictly speaking unnecessary, as in most cases the friendly policeman only wants to check the car’s insurance papers.

Reggio Calabria to Taranto: A road trip through south Italy