Fettuccine with asparagus and pecori inspired by a visit to the Osteria Travi “Il Buco” in Bari, where they offer genuine and local cuisine.

When visiting a new Italian city, I seek advice on where to eat in the online Michelin guide, and the French Bibendum never cease to surprise. In a good way.

Last time was a mild April evening in Bari, where our first choice restaurant was fully booked. Instead we went to Osteria Travi “Il Buco” which had been awarded two forks with a recommendation of ‘home cooking offering genuine and local cuisine.’

In Puglia this means la cucina povera and Il Buco didn’t let us down with a buffet of seasonal antipasti including melanzane parmigiana, spinach and broad beans.

The main courses were just as traditional with offerings of homemade pasta with horse meat sauce, wild boar sausage and mussels and artichokes in pecorino sauce. Nothing costed more than 6 euro and with 2 euro for half a litre of wine, there was absolutely nothing to complain about. In fact the main course was absolutely lovely, and it inspired me to recreate part of the recipe in this dish of fettuccine with asparagus and pecorino.

For the fettuccine
400 g flour
2 eggs

Prepare the pasta
Form a heap of flour on a clean tabletop
Make a well in the centre and add the egg yolks
Stir the egg yolks with a fork to incorporate the flour.
Add a little water to make a firm elastic pastry.
Wrap the pastry in cling foil and leave it in the fridge for 30 minutes.
Knead the dough thoroughly with the heel of your hand or run it through a pasta machine 10 times at the widest width.
Keep rolling the pasta through the machine while you gradually decrease the width.
When the pasta sheets are appropriately thin run them through the fettuccine aggregate.
Clean and break the hard ends off the asparagus.
Break the asparagus in bite sized pieces,and cook them in boiling, salted water for 3 minutes.
Heat the milk over low heat in a casserole.
Add the grated pecorino and let it melt in the milk. It’s important to prevent the cheese from getting a heat shock, as this may cause coagulation.
Keep stirring while the cheese melts.
Use lemon juice, salt and pepper to adjust the taste.
Add the pre-boiled asparagus, when the cheese has melted completely, and you have a creamy pecorino sauce.
Cook the pasta in boiling, salted water for 3 minutes.
Drain the pasta and toss it with the sauce, and your fettuccine with asparagus and pecorino is ready to serve. 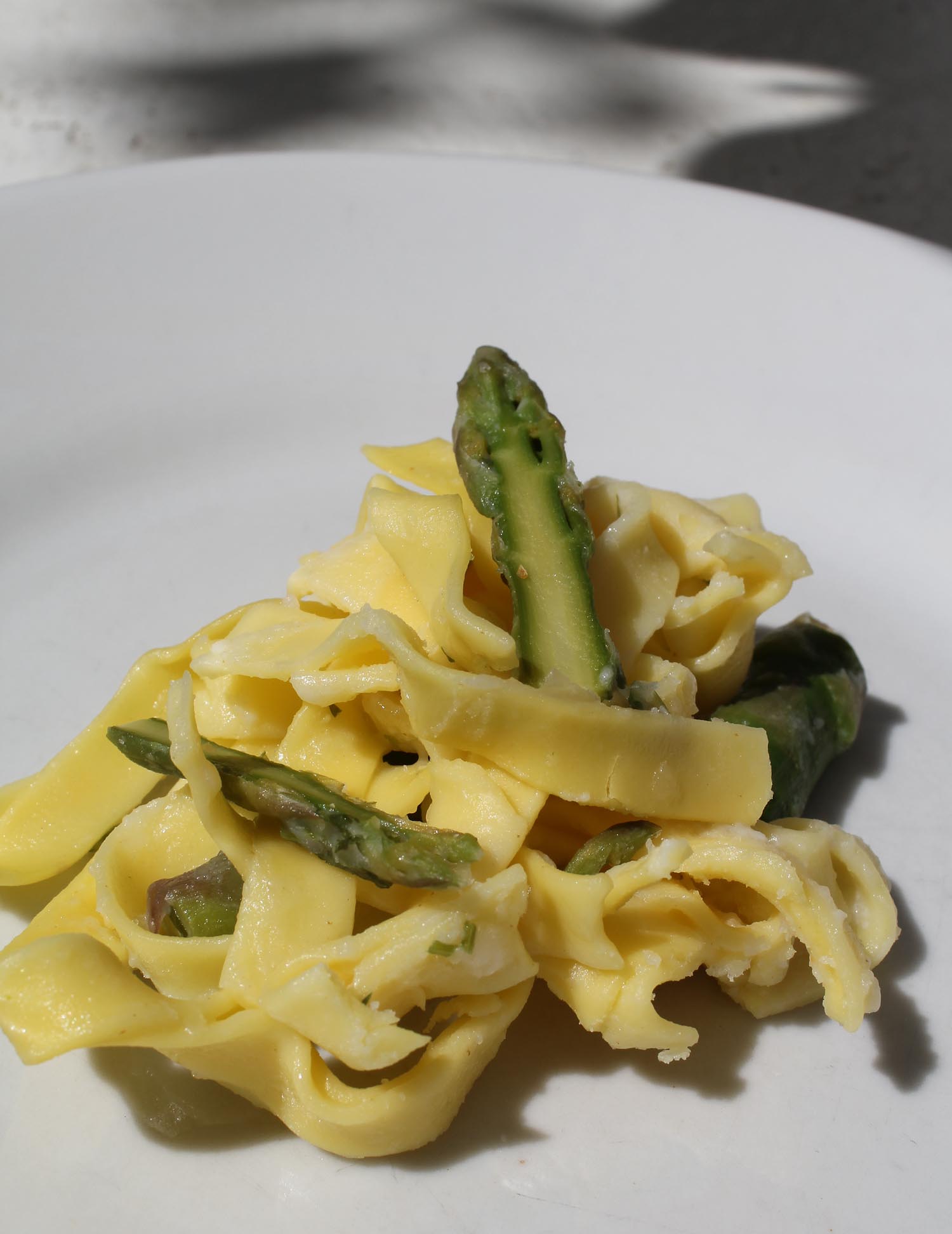