Maybe it is the positive emotional message of harmony and protection associated with the oval shape that leads to an instant infatuation with Piazza del Campo in Siena. This collection of facts may help to explain the phenomenon.

Piazza del Campo in Siena was established as a marketplace on a sloping site near the meeting point of the three hillside communities in the 12th century.

The facade of Palazzo Pubblico is slightly concave in order to reflect the outwards curve of Piazza del Campo. It is characterised by a white strip of marble on the ground floor and with a rhythmic alternation between three-arched and two-arched windows. 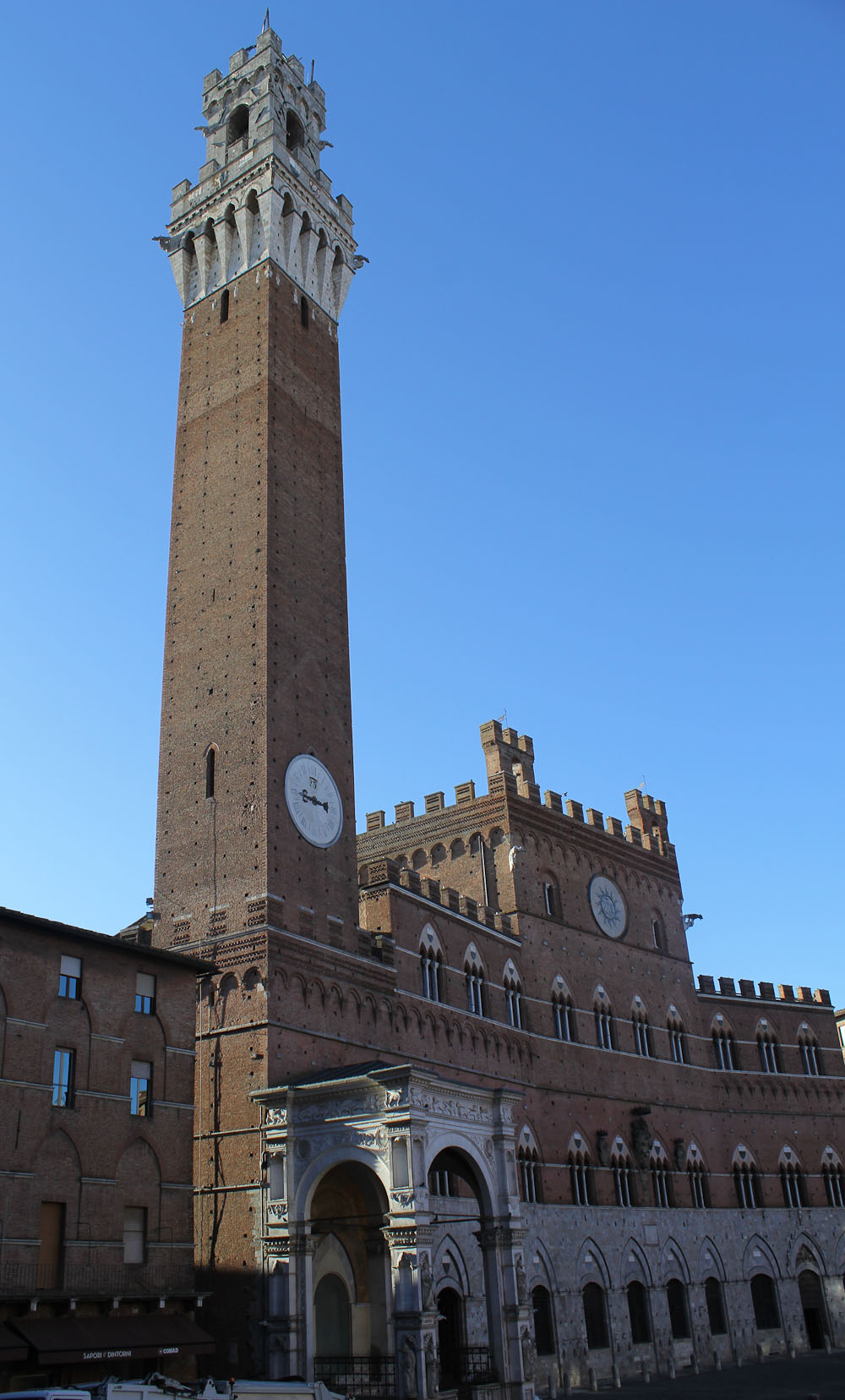 Palazzo Pubblico with Torre del Mangia and the Cappella di Piazza. If you look closely, you’ll see the black and white Balzana emblem over every window.

Siena’s black and white coat of arms called the ‘Balzana’ can be seens in the recessed triangular spaces over doors and windows. The Balzana symbolise the black and white horses that led the mythical sons of Remo, Aschio and Senio, over the hill to the place where Siena was founded.

The bell tower of Palazzo Pubblico was was built between 1325 and 1344. It was designed to be taller than the tower in rivalling Florence, and at 102 m it is the second tallest medieval tower in Italy after Torrazzo of Cremona. The Asinelli tower in Bologna comes third at 97 m.

5. View from the Top

The walls of the tower are approximately 3 m thick on each side, and there are 332 steps to the top of the tower from where you can admire an exceptional view of the city.

The tower was exactly the same height as the Siena Cathedral. A sign that the church and the state had equal amounts of power.

The tower is known as Torre del Mangia after the first bellringer, nicknamed Mangiaguadagni for his idleness or gluttony.

The crown of the tower was designed by the painter Limmo Memmi, a famed practitioner of the international Gothic style with its emphasis on vertical lines. It consists of a parapet resting on corbels. The pronounced petal-like arches between the corbels have led writers to describe the structure as a tulip or lily.

9. Bells and a Mechanical Clock

The greatest one of the three bells on top of the tower is called the “Sunto”. On the lower part of the shaft the tower was fitted with a mechanical clock in 1360.

Cappella di Piazza is the marble loggia at the foot of the bell tower. It was added in 1352 as a vow for the Holy Virgin by the Sienese survivors from the Black Death. The vaulted ceiling is supported by 4 pilasters decorated with images of saints. During the Palio games, the mass for the jockeys is held at its altar.

The main reason Siena has maintained its medieval intregrity is disaster. Approximately half the population died in the plague in 1348. In consequence, the republic’s economy was destroyed and the state quickly declined from its prominent position. Over the following centuries Siena stagnated, which meant it did not develop during the Renaissance. It was also preserved from bombardment during World War II and from modern development. 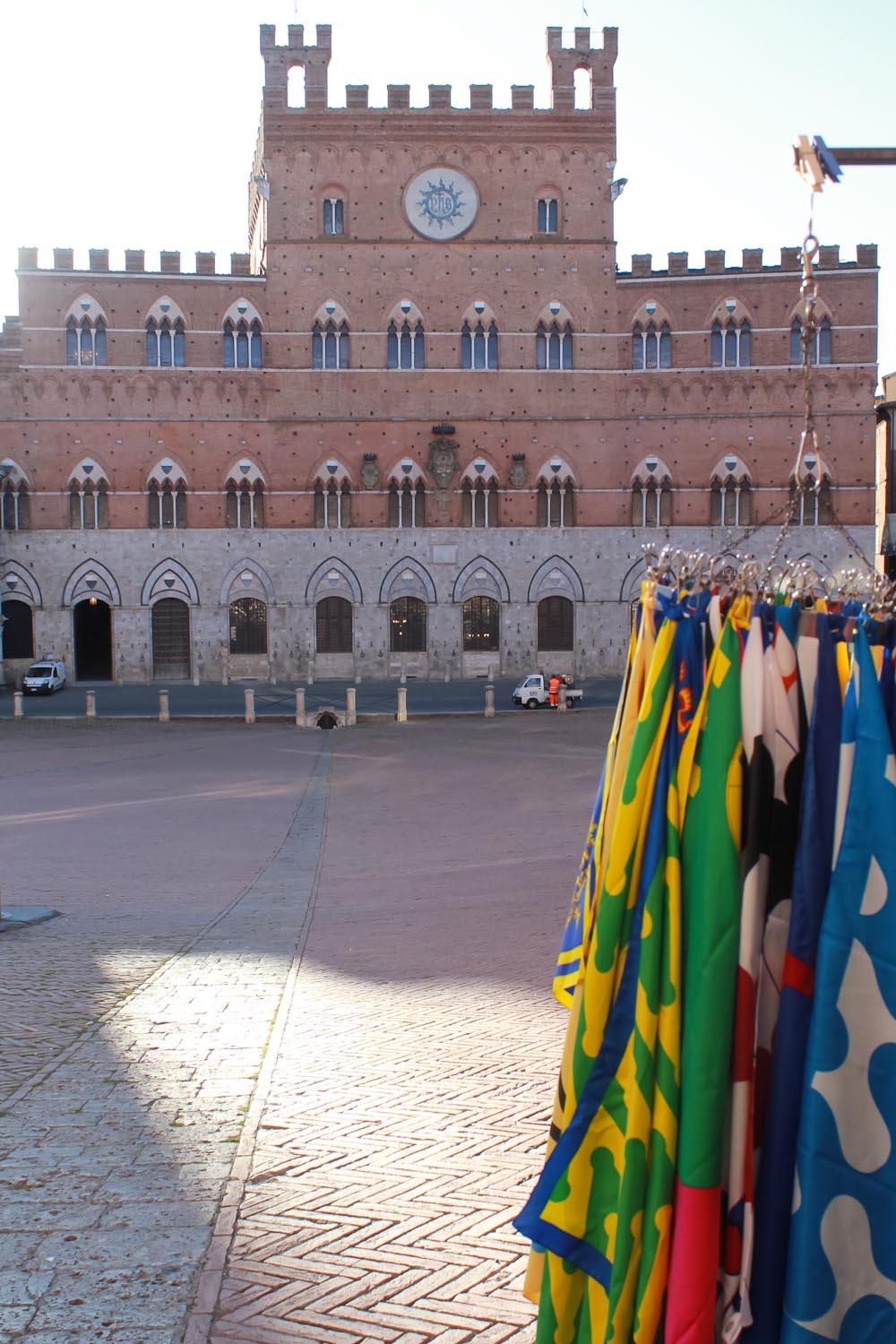 The nine lines dividing the Campo into sections fan out from the central drain in front of Palazzo Pubblico.

In front of Palazzo Pubblico the shell-shaped piazza was paved in 1349 in a red brick fishbone pattern divided into ten sections by lines of travertine. The nine lines radiate from the mouth of the central water drain in front of Palazzo Publico.The number of divisions were said to reflect the rule of the IX merchantile-banching oligarchy that ruled Siena between 1287-1355. In spiritual terms the sections were said to resemble the folds in cloak of Virgin Mary, who was considered the “ultimate ruler” of Siena.

Piazza del Campo has a circumference of 333 meters. During Il Palio the shell-shaped centre of the Campo has a capacity for around 30.000 spectators

The Fonte Gaia (Fountain of the World) is found at the northwest edge of the piazza. It was built in 1419 as outlet for a system of more than 30 km underground tunnels bringing water to the city’s centre and draining the surrounding fields. 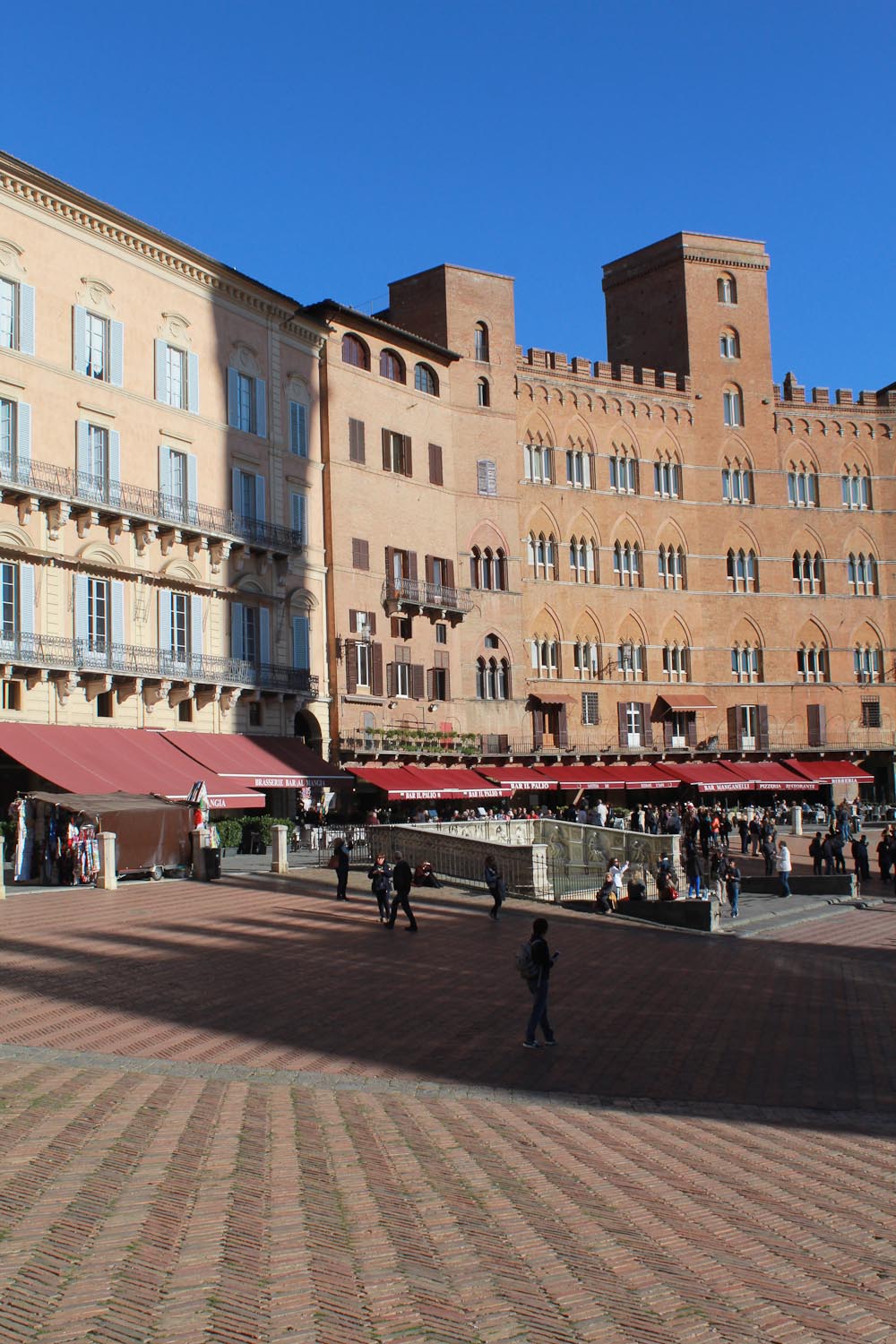 Fonte Gaia and in the background Palazzo Sansedoni with the rhomboid tower.

Fonte Gaia is a rectangular white marble basin that is adorned on three sides with basreliefs of the Madonna surrounded by the classical and the Christian virtues.

The palazzi signorili that line the Campo belonged to the wealthiest families, which were the Sansedoni, the Piccolomini and the Saracini.

In contrast to earlier tower houses, the palazzi signorili that line the Piazza del Campo in Siena have unified rooflines.The civic and architectural decorum that new edifices along public thoroughfares should proceed in line with existing building was prescribed by the statutes of the city.

In addition these late Gothic houses share the uniformity of brick walls, as brick-making was a monopoly of the commune.

Another common architectural feature are the Sienese arches characterised by a lowered arch surmounted by a pointed arch over doors and windows.

Starting from Via Rinaldini the first palazza to the right is Palazzo Chigi-Zondadari. The name Zondadari indicates that the house originally belonged to a family of silk merchants.

The neighbouring Palazzo Sansedoni was originally several private homes that were integrated in one palace over the course of a century. It belonged to one of Siena’s leading aristocratic dynasties during the Middle Ages. Beato Ambrogio Sansedoni, who lived from 1220 to 1286, was a major player on the political and social scene, and his exceptional talents as a speaker and crowd-mover were admired across Italy. Inside the palazzo the chapel of the Beato Ambrogio you’ll find one of Siena’s finest examples of baroque decoration. Some sources report the unusual rhomboid tower in the middle of the building was truncated in order to not appear taller than the Torre del Mangia. Today, the palace has offices and exhibition spaces for the Fondazione Monte dei Paschi di Siena.

Between the alleys of San Pietro and San Paolo, you’ll find the backside of the Loggia della Mercanzia followed by the Case de Metz.

Costarella dei Barbieri is also known as La Mossa. The line that marks the start and the finish of the Palio.

Costarella dei Barbieri is also known as La Mossa. It marks the start and finishing line in the Palio race.

The last palazzo on Piazzo del Campo is Palazzo d’Elci originally belonging to the noble Pannocchieschi family. The palazzo is characterised by the rectangular shaped guelph merlons on the battlement and a strong likeness to the Palazzo Publico. Palazzo d’Elci was the first seat of the Sienese government.

From the piazza, eleven narrow streets radiate into the city. A 12th – now closed – alley was placed in between two of the original houses that became Palazzo Sansedoni.

On the corner of Cassato di Sotto you may find a marble plate with a quote from Dante’s Purgatory saying:

The lines refer to the humiliation of Provenzan Salvani, who was forced to beg in public in Siena in order to help a friend. This is just one of several plaques with Dante quotes strewn over the city.

Scenes in the James Bond film Quantum of Solace were filmed on location in Piazza del Campo. The film opens as 007 chases a villain through Siena’s narrow cobbled streets and across rooftops on foot, after having raced through the city’s underground alleyways and medieval aqueducts in his Aston Martin. The chase ends with Bond emerging from the Fonte Gaia in Piazza del Campo just as the Palio race ends.

30 Most Dreamy and Fantastic

Charles Dickens visited Siena in 1845 and in ‘Pictures from Italy’ wrote:
‘We went off, betimes next morning, to see the Cathedral, which is wonderfully picturesque inside and out, especially the latter – also the market-place, or great Piazza, which is a large square, with a great broken-nosed fountain in it: some quaint Gothic houses: and a high square brick tower; outside the top of which – a curious feature in such views in Italy – hangs and enormous bell. It is like a bit of Venice, without the water. There are some curious old Palazzi in the town, which is very ancient; and without having (for me) the interest of Verona, or Genoa, it is very dreamy and fantastic, and most interesting.” 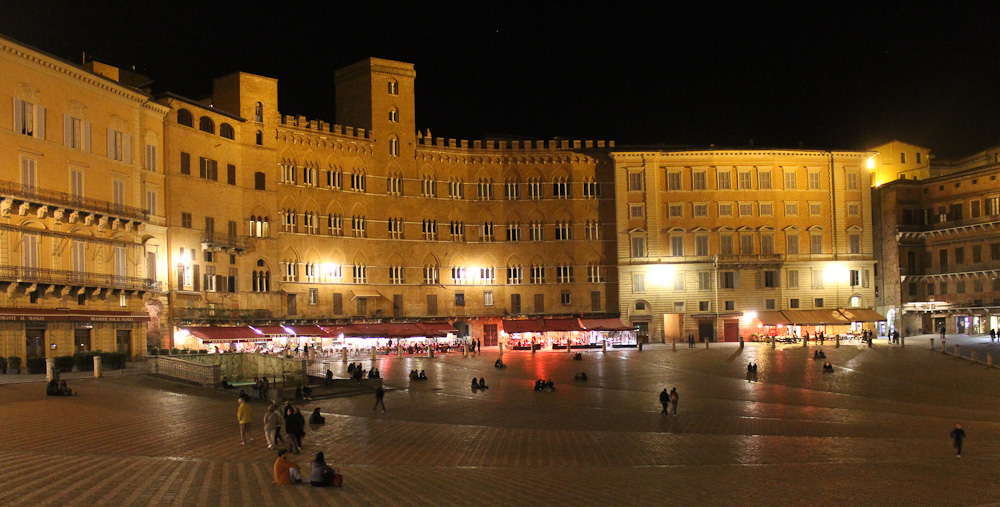 “The moonshine assisting, I had half-an-hour’s infinite vision of mediæval Italy.”

31. Almost a Phantom of Delight

Henry James experienced the Piazza del Campo in 1873 and wrote about it in ‘Italian Hours’
“The great Piazza of Siena is famous, and though in this day of multiplied photographs and blunted surprises and profaned revelations none of the world’s wonders can pretend, like Wordsworth’s phantom of delight, really to “startle and way-lay,” yet as I stepped upon the waiting scene from under a dark archway I was conscious of no loss of the edge of a precious presented sensibility. The waiting scene, as I have called it, was in the shape of a shallow horse-shoe – as the untravelled reader who has turned over his travelled friends’ portfolios will respectfully remember; or, better, of a bow in which the high wide face of the Palazzo Pubblico forms the cord and everything else the arc. It was void of any human presence that could figure to me the current year: so that, the moonshine assisting, I had half-an-hour’s infinite vision of mediæval Italy.” 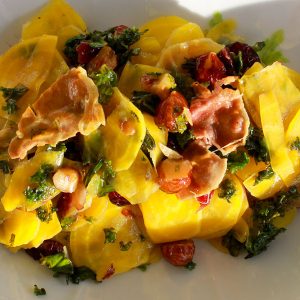 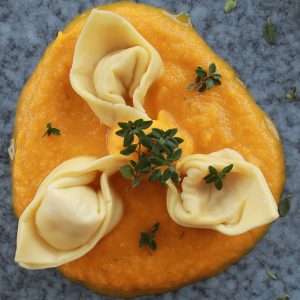