To non Catholics a visit to Santa Maria degli Angeli Assisi come as a revelation of history, beauty and spirituality. Here are 10 facts to explain the magic of the place.

According to Assisi Online Santa Maria degli Angeli is the seventh largest Christian church (St. Peter’s Basilica being the largest)  – A Mannerist styled basilica situated at the foot of the Assisi hill in Umbria.

3. A church within a church

Inside the basilica directly under the dome there’s another little church of older origin which measures about 5.5 by 3.2 m. This little exquisitely decorated chapel called the Porziuncola (meaning “Little portion of land”) is the most sacred place for all the people and religious orders that adhere to the teachings and spiritual disciplines of Saint Francis of Assisi.

4. Relics from the grave of Virgin Mary

According to legend the Porziuncola chapel was erected between 352-366 by hermits from the Valley of Josaphat in Israel, who had brought relics from the grave of the Virgin Mary. The chapel passed into the possession of St. Benedict in 516 who gave it on to St. Francis in 1208 on condition of his making it the mother house of his religious family. The church has never since been abandoned by the Franciscan friars.

When St. Francis received Porziuncola it was in bad condition, lying abandoned in a wood of oak trees. St. Francis restored it with his own hands after being visited by a mystical vision of Christ. It was in the Porziuncola  Francis of Assisi understood his vocation and renounced the his father, his patrimony, and even his garments in order to live in poverty among the poor and thus started the Franciscan movement.

St. Francis asked the Pope to grant a special pardon to all sinners confessed, repented and acquitted who enter the Porziuncola chapel between the afternoon of 1 August and sunset on 2 August. Later the privilege of the Porziuncola Indulgence has been extended to all churches pertaining to the Franciscan Order.

From the sacristy of Santa Maria degli Angeli visitors can enter a rose garden which is the last remains of the ancient oak wood. In this place St Francis lived and talked to the turtle doves, inviting them to praise the Lord. Since then doves have been nesting in the hands of the statue of St. Francis in this rose garden. 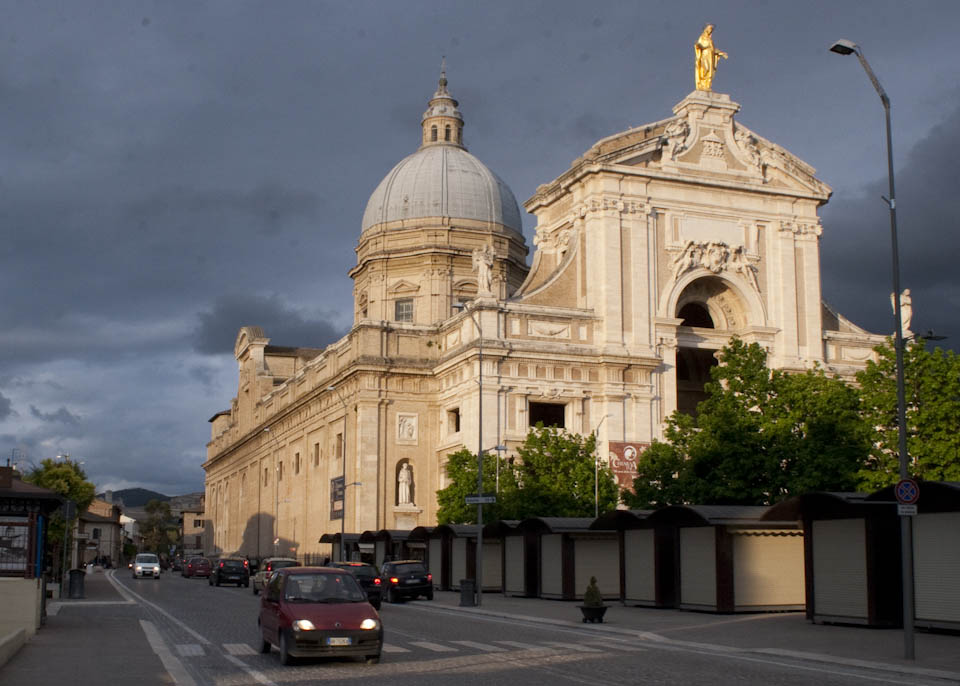 The basilica in Santa Maria degli Angeli near Assisi

8. The miracle of the thorny bush

One night St. Francis felt a strong carnal temptation which induced him to roll naked in bramble thorns in an attempt to overcome his doubts. Upon contact with his body, the bramble bushes turned into dog roses without thorns. Even today a special thorn-less rose still grows in the garden.

St. Francis died in 1226 in a little hut serving as a primitive infirmary for the sick near the Porziuncola. The hut has been incorporated in the basilica as Cappella del Transito and above the small altar there is the rope of St. Francis.

San Francisco in California was named after St Francis and here a 78% scale replica of the original Porziuncola Chapel has been built.

Other notes on Santa Maria degli Angeli Assisi and nearby places