Pretty doll-sized houses, a broken sword and the legend of a black, horse-drawn carriage are among the main attractions of Fano in Le Marche.


Looking at the map, I’d expected Fano to be yet another Adriatic seaside resort crammed with sunbeds, gelato shops and miserably small stretches of free beach. And if you stick to the area east of the railroad line that cuts through town, that’s exactly what you’ll find. A perfect holiday setting for those who have spent the last year dreaming about a week in the sun only interrupted by the occasional swim, a cool drink and genuine Italian pizzas. If you, on the other hand, walk across one of the railroad bridges, you’ll discover a city with a rich and dramatic history dating back to 49 BC. 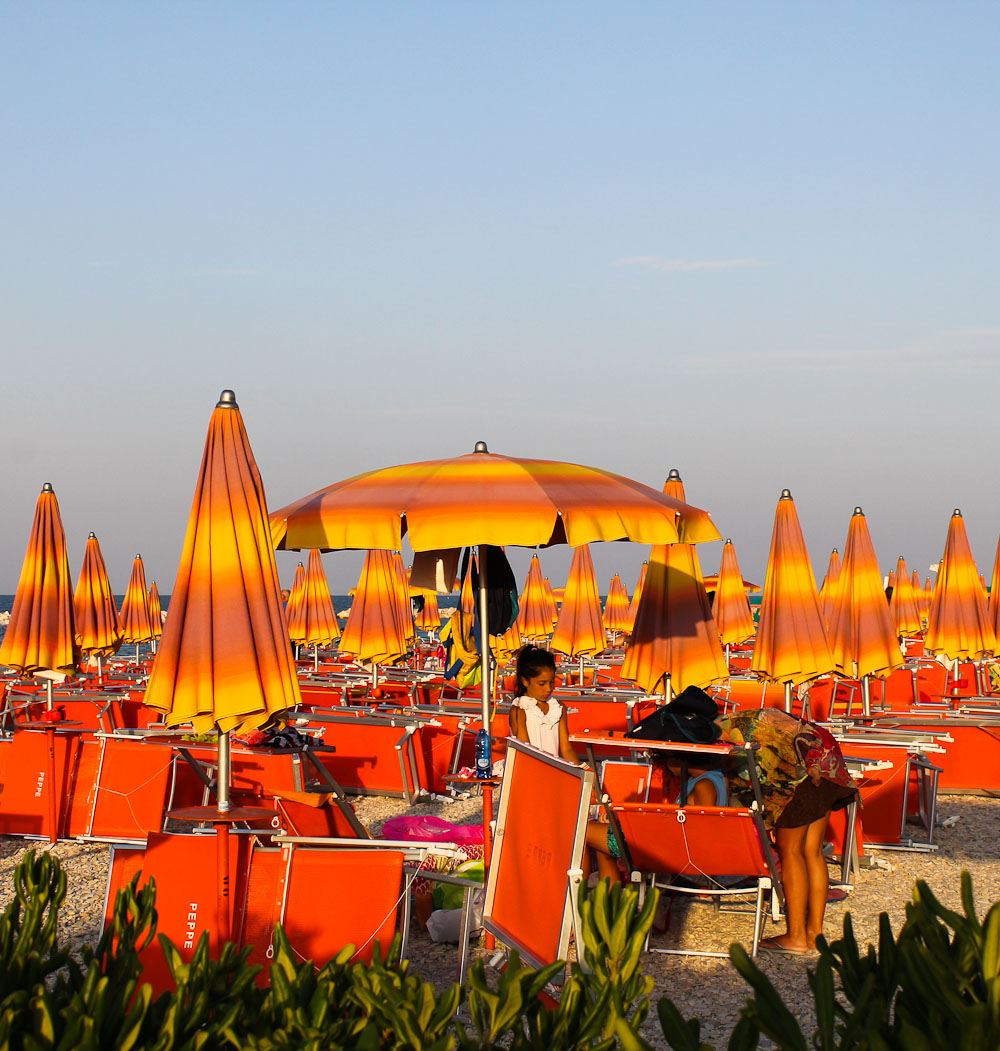 There’re plenty of free umbrellas at the private beaches in Fano, while the free public beach is more crowded.

We started our tour of Fano by walking under pine trees inside the remaining city wall. Much of the wall has crumbled with age, but on Via Mura Augustee it’s almost intact and teenagers have fun climbing the rubble. The wall takes us back to the time when Fanum Fortunae was a Roman colony on Via Flaminia, the ancient road connecting Rome with Rimini and the fertile plain along the Po river.

When the wall come to an end, a youthful looking Augusto greets us with a finger pointing upwards, as if he is awaiting permission to talk. A meek posture considering his legacy which in Fano includes a triumphal arch with three vaults as the primary gate to the city. Part of the monument was destroyed during a feud in 1463, but you can still read the inscription enumerating Augustus’ political victories on the frieze and see an image of the original structure on the facade of Saint Michael’s Church and loggia on the right hand side of the arch. 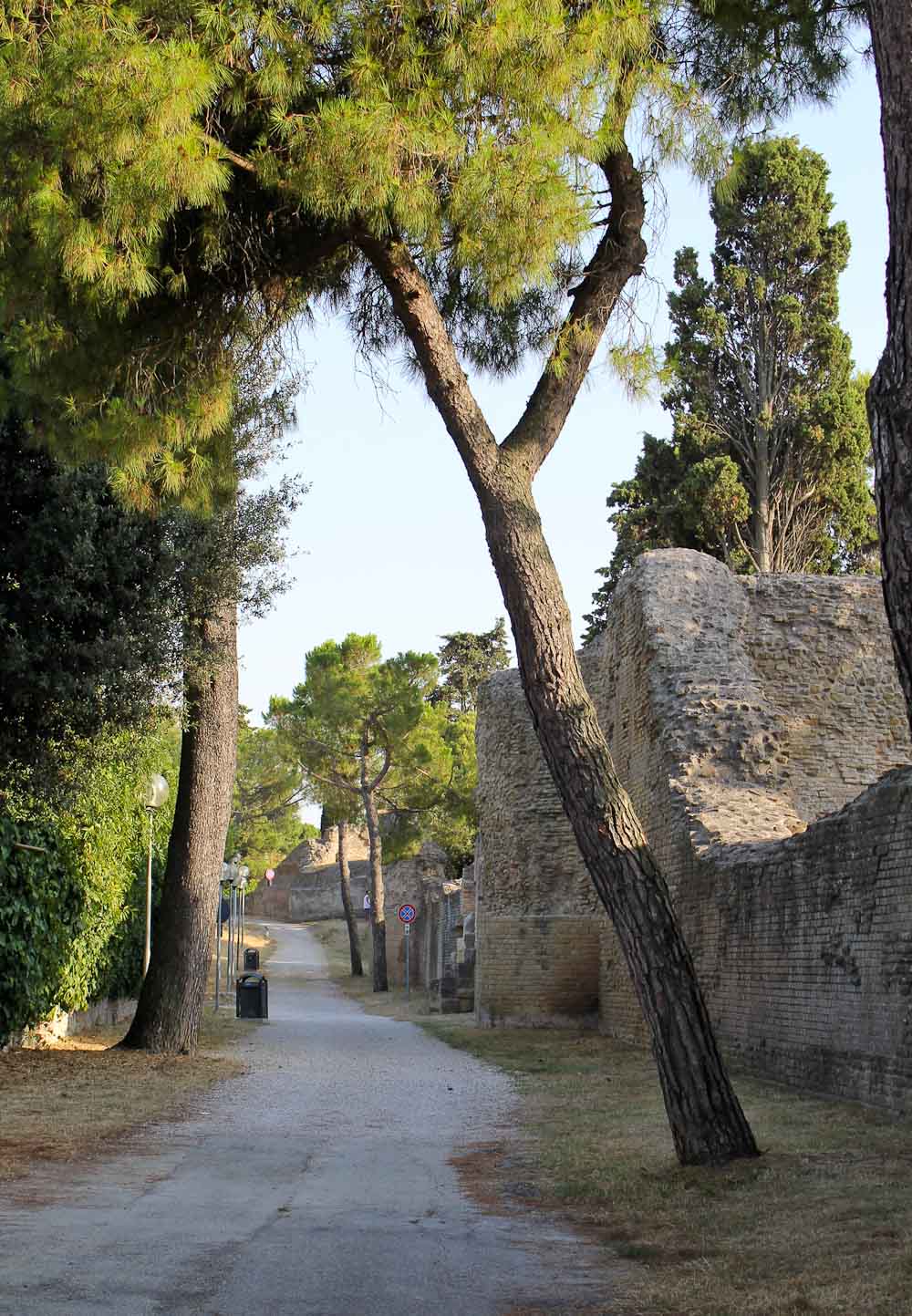 Via Flaminia ran on the other side of the city wall built to protect Fano.

Bicycles and a Horse-Drawn Carriage

Inside the gate there’s a welcome ban on motorized traffic, but people have taken up bicycling instead and speed past in the narrow cobble-stoned streets. The only other vehicle reported inside the gate is a black carriage drawn by two black horses and a liveried coachman.

I had hoped to catch a glimpse of the black coach that should be discernible on pitch dark nights, but a bright moon kept the streets illuminated. The carriage is supposed to start from a corner of Piazza degli Avveduti known locally as il Vicolo dell’Inferno or the Alley of Hell and drive at full speed through the old town and out Arco di Augusto. No one has ever recognized the passenger seated in the carriage, but witnesses claim that the carriage crashes as soon as it passes Saint Michael the Archangel’s church and that the carriage along with the horses, the coachman and the passenger are swallowed by the ground.

And even if you won’t see the carriage, you can still see Saint Michael waving his sword that appears to be broken above the door to the church. As long as you take care not to get in the way of the bicycles dashing through the gates 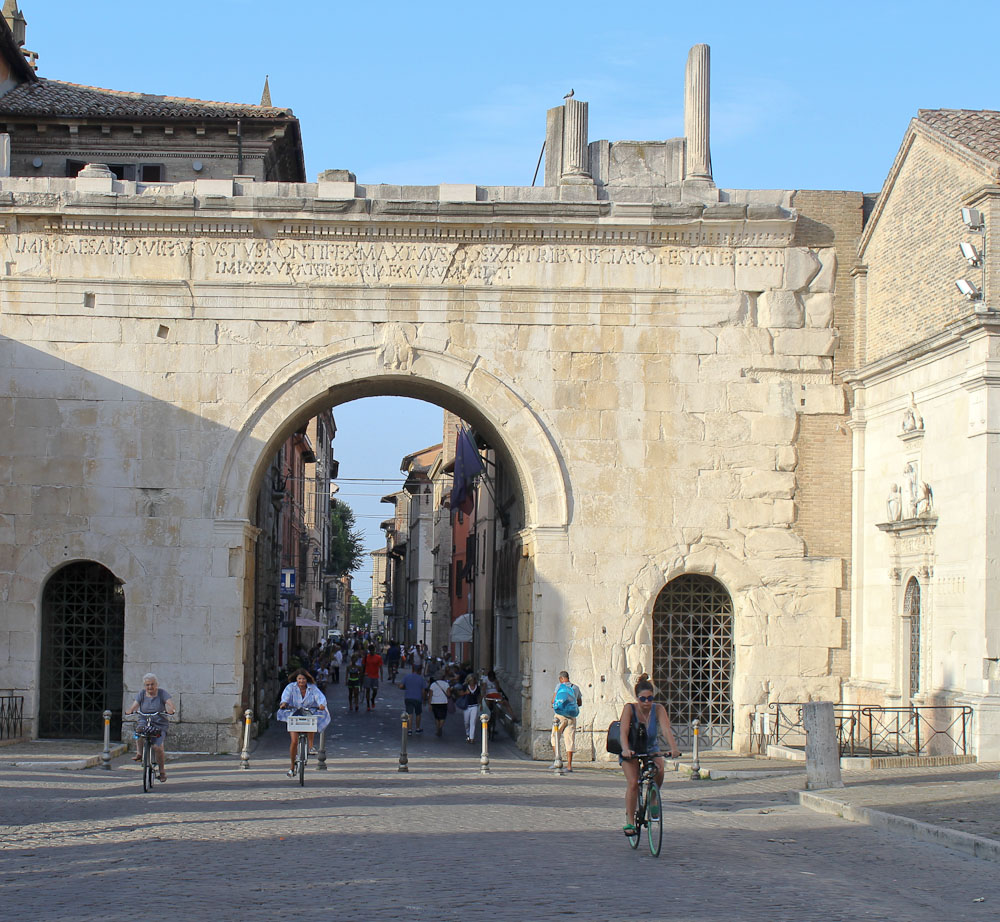 Arco di Augusto is the main gate to the old town, while Saint Michael’s Church can be seen to the right.

Such legends go well with the Medieval city centre, where even churches hide behind massive layers of brick. From 1356 Fano was under the rule of the Malatesta family, who also ravaged Ascoli Piceno, and it lasted until 1463 when the town was besieged by Papal troops under Federico III da Montefeltro from Urbino, and returned to the Papal administration. Before that happened the famous condottiero Sigismondo Pandolfo Malatesta extended the city walls and initiated the construction of housing for the poor.

The effort gave rise to the Piattelletti neighbourhood that spreads across Via Tomassini, Via Tomani, Via Speranza, Via Monaldi, Via della Vica and Via del Vasaro where rows of small terraced houses line streets so narrow you can reach almost across them with open arms. Over the last 50 years these characteristic townhouses have been refurbished and decorated in a multitude of warm colours, adding yet another aspect to the emperors and commons, warlords and noblemen, angels and devils that have inhabited Fano between Pesaro and Ancona through the centuries. 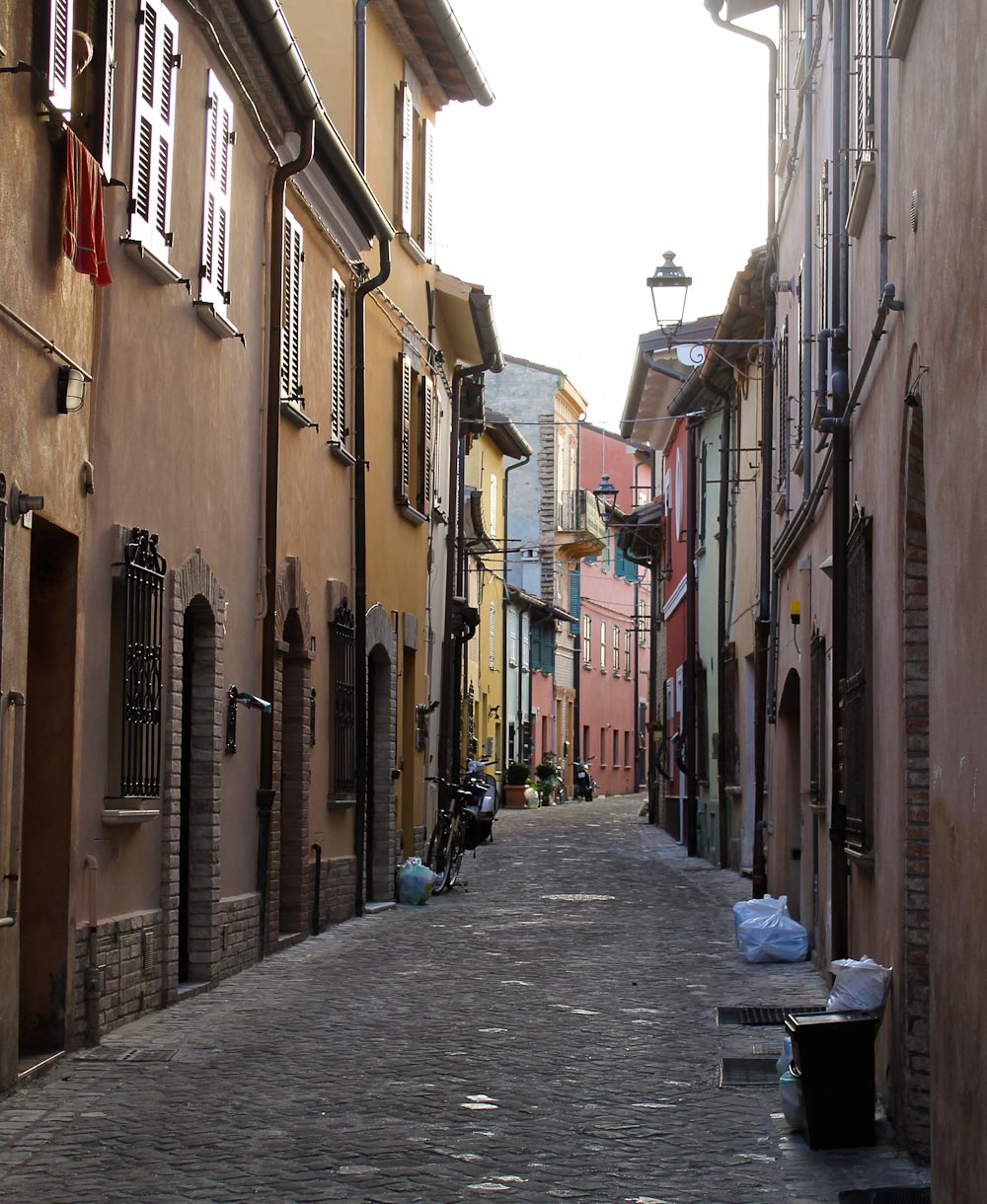 The Piattelletti neighbourhood offered Medieval accommodation for the poor.