Lombardy is the Italian region with most Unesco World Heritage Sites. This six day itinerary guides you to Unesco sights in the main cities as a way to explore Lombardy.

As one of the most populous and rich regions in Italy, Lombardy offers all the attractions imaginable. Here you’ll find cosmopolitan cities and secluded villages. Mountains, hills, lakes and plains with facilities for every conceivable outdoor activity. And there are foodie trails, museum trails, festival trails, garden trails and many other trails to cater for visitors with particular points of interest.

This itinerary is a cultural trail leading you to Lombardy’s Unesco World Heritage Sites around the Po Valley. In six days you will visit places that live up to one or more of Unesco’s six criteria as masterpieces of human creative genius; monumental architecture, architecture, design or art; structures that bear exceptional testimony to a cultural tradition or civilization; outstanding buildings that illustrate a significant stage in human history; outstanding examples of a traditional human settlement; or sites associated with events, ideas or living traditions of outstanding universal significance.

All the sites are located in big cities in the plains, which means you can travel by train, bus or car. The maximum distance between two sites is 90 km or 90 minutes travel time. So if you don’t like the idea of settling into a new hotel every night, you can easily find a nice agriturismo or a place to stay in or around eg. Bergamo or Cremona, from where it is possible explore the sites on day trips.

Make sure to book tickets months in advance for your 15 minutes in the company of Leonardo da Vinci’s iconic painting.

The Last Supper
The itinerary starts in Milan with Leonardo da Vinci’s masterpiece The Last Supper and one of the most important paintings of all times. The painting made between 1495-1497 depicts a scene from the New Testament, when Jesus sits down to dinner with the 12 Apostles, knowing that one of them will betray him. By using light and strong perspective Leonardo captures the movements and expressions of each figure represented. For this reason the painting is considered a timeless and unique artistic achievement of Outstanding Universal Value that has highly influence the development of painting. It covers the north wall of the refectory in the Convent of Santa Maria delle Grazie, which is an integral part of an architectural complex that also includes a church.

The painting measures 4.60 by 8.80 meters and it is quite vulnerable. And several measures have  been implemented to protect the paint from deterioration. To ensure that the fresco is maintained at room temperature, since the last restoration, visitors’ entry has been restricted to a group of 25 people every 15 minutes. With these limits, tickets tend to be sold out months and years in advance, so you should book your visit well ahead of time and/or contemplate a group tour.

Although The Last Supper and the Church and Dominican Convent of Santa Maria delle Grazie is the only Unesco World Heritage site in Milan, the city has other must-visit sights like the cathedral, the Galleria Vittorio Emanuele II, the Sforza castle and the Scala Opera house. And if this isn’t enough to keep you occupied, there is a long list of art galleries and museums waiting to be explored.

About 90 km from Milan and right in the middle of the Po Valley you’ll find Cremona, a town that has been famous for its luthiers and musical activity since the 16th century. The string instrument makers in Cremona have taken their craft to the summit of achievement, and there are still 150 active artisan workshops in Cremona keeping the traditions of past masters alive. For this reason, Cremona has been included in Unesco’s representative list of Intangible Cultural Heritage.

The process of fashioning and restoring violins, violas, cellos and contrabasses by hand starts with selecting, shaping and assembling more than 70 pieces of wood around an inner mold. The wood is carefully chosen and seasoned according to the different acoustic response of each piece. No two instruments are alike.

Violin-makers learn their craft by attending a specialized school with a close teacher-pupil relationship, before being apprenticed in a local workshop. From then on they continue to improve their techniques. Each violin-maker constructs from three to six instruments per year.

The most famous violin-maker in Cremona was Antonio Stradivari, and his house in Corso Garibaldi 57 is occasionally opened to the public. In addition there is a Museo del Violino with regular concerts and auditions in Piazza Marconi 5. 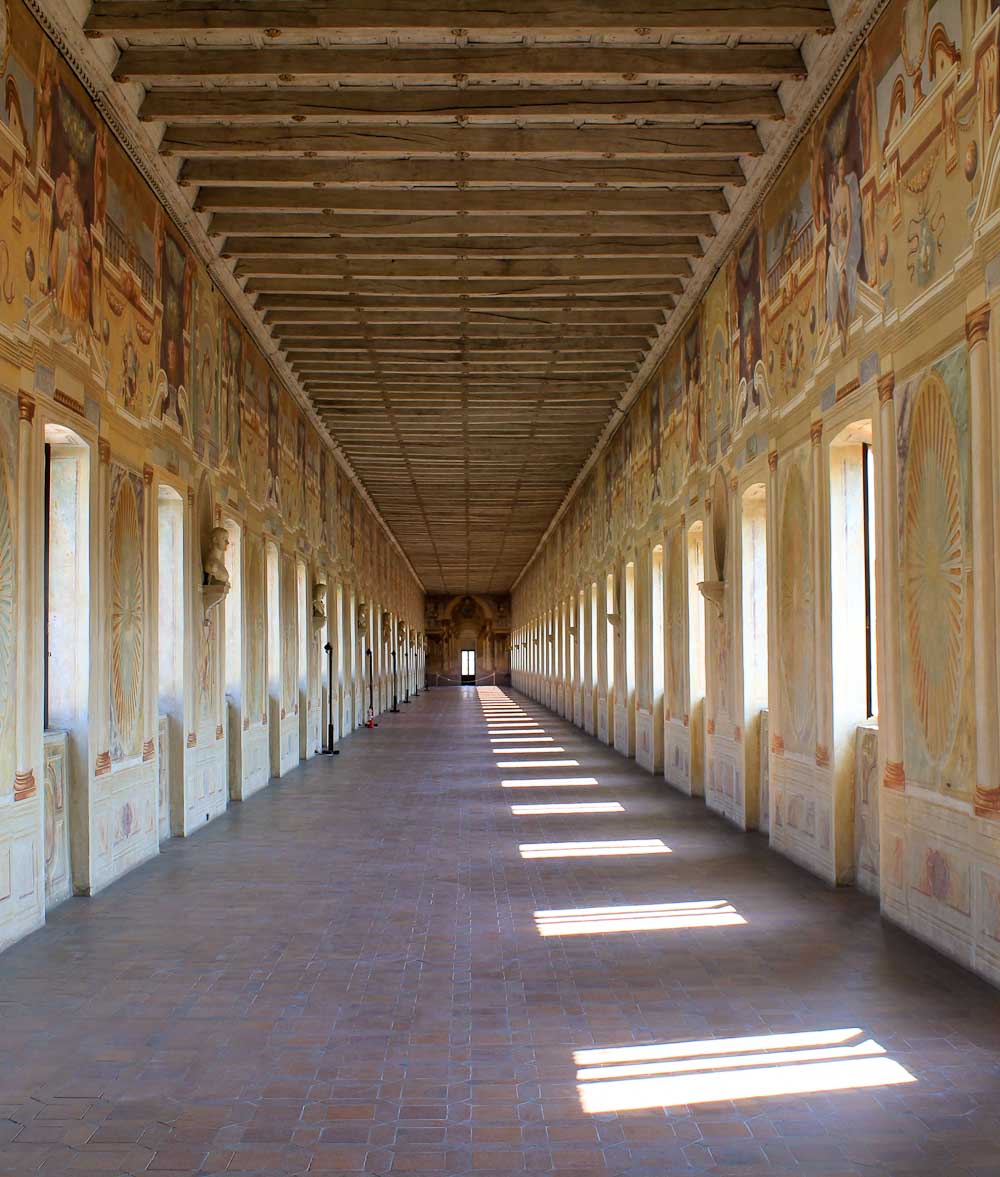 Galleria degli Antichi in Sabbioneta is one of the Renaissance gems included in the Sabbioneta and Mantua World Heritage Sites.

The ideals of the Renaissance

From Cremona you drive 80 km east to Mantua, but on the way you make a stop in Sabbioneta – the ideal city of the Renaissance. Both towns are Unesco World Heritage because of their monumental Renaissance architecture and because they can be seen as testimonies to a particular civilization. The difference between them is that Sabbioneta was a new town designed and built from scratch in accordance with Renaissance theories of urban planning. Mantua, on the other hand, was an existing city which was adapted to the architectural and artistic aspirations of the 15th and 16th century.

While Sabbioneta appears as a museum town with few permanent residents and a number of museums and public buildings, Mantua is a living city with a university and lots of shops, outdoor markets, cafes and restaurants. I would spend the morning in Sabbioneta and visit the Ducal Palace, Palazzo Giardino, La Galleria degli Antichi, Teatro all’Antica, the Church of Beata Vergine and the Synagogue, and then use the afternoon and evening to hang around and soak up the atmosphere of Mantua. In other words, I’m not sure I would find time to visit some of the 11 listed museums, though Mantua’s Ducal Palace and Palazzo Te are gigantic and highly interesting. But it’s nice to have the Mantova Sabbioneta Card that buys access to all the houses and museums mentioned and more. 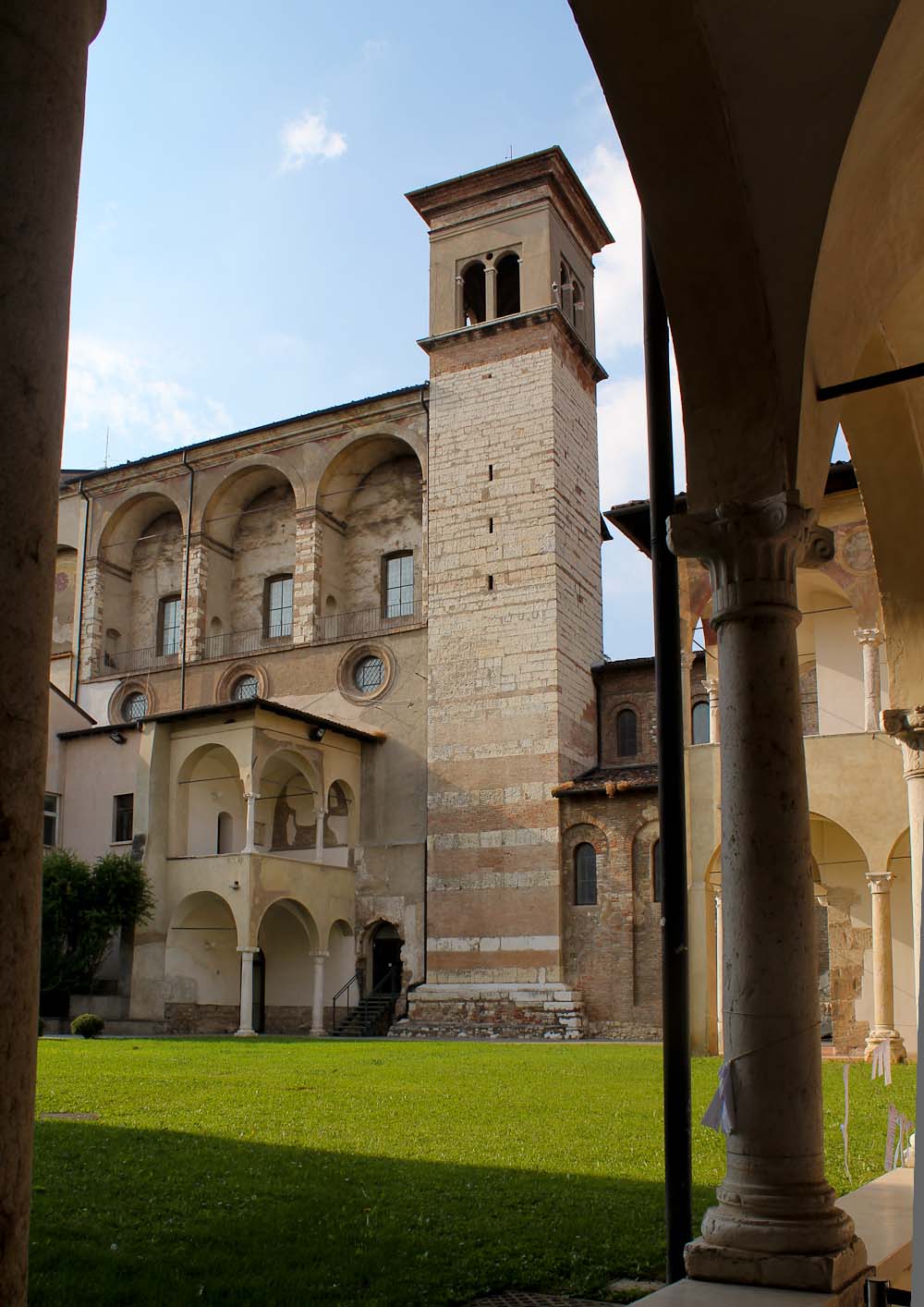 The female monastery San Salvatore-Santa Giulia in Brescia is part of a multi-centred Unesco World Heritage Listing for the Longobards in Italy.

From the Renaissance we move north to Brescia and places of power during the reign of the Longobards in Italy (568-774 A:D). This multi-centered site spreads over 7 locations in Italy and in Brescia you find the monumental area with the monastic complex of San Salvatore-Santa Giulia.

The Longobards (or Lombards) were a Germanic tribe from southern Scandinavia who migrated south looking for new territory. They ended up conquering much of Italy, founding their own kingdom and giving it the name Lombardy. One of the kings, Desiderius, had four daughters, and to ensure their economic, social and political position he established a female monastery called San Salvatore (and later Santa Giulia) in Brescia in 757 with one of his daughters as the first abbess. The monastery owned an enormous amount of property, and it served as an important cultural centre, producing books, paintings and metalwork.

Today the monastery has been transformed into a huge museum with monuments, building blocks and artifacts spanning 2000 years of history. And when you have walked through all the churches, cloisters and rooms of the monastery, you really deserve a rest at one of the charming cafes on Piazza Paolo VI. 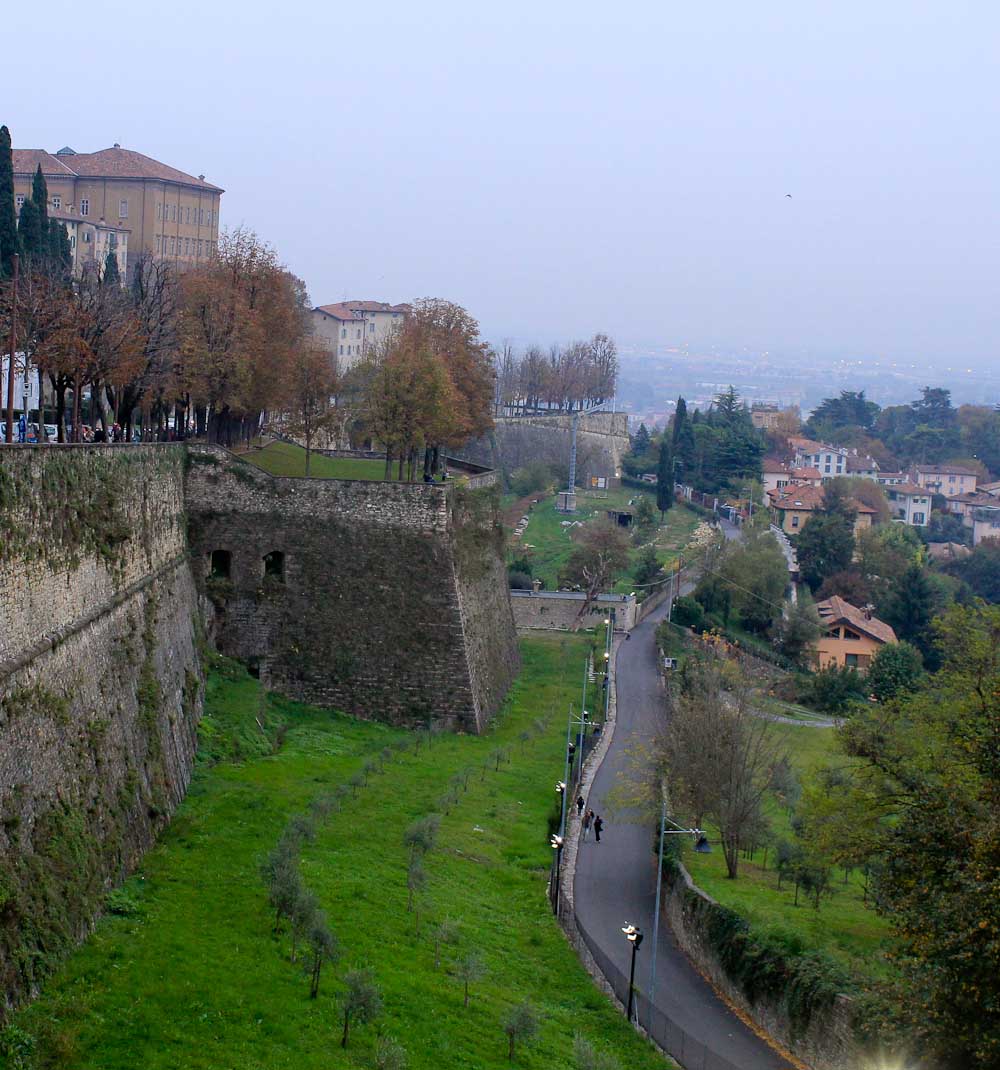 Even on a drizzly day it is fascinating to walk the perimeter of the defensive walls in Bergamo seeing how the structure has been designed to prevent invading armies from conquering the town.

Just 50 km north west of Brescia, you will reach Bergamo and another multi-centered World Heritage Site. The entire city of Bergamo with its sharp division in Città Alta and Città Bassa has been on Unesco’s Tentative List since 2006, but so far only the massive Venetian Walls have been granted World Heritage status along with similar fortifications in Peschiera del Garda, Palmanova and three other cities in Croatia and Montenegro.

The Venetian defence walls are seen as testimony to a cultural tradition and as outstanding structures that illustrate a significant stage in human history. They were built in the 16th and 17th centuries to sustain the expansion and power of the Republic of Venice at a time when the introduction of gunpowder led to significant shifts in military techniques and architecture.

Compared with the earlier, ring-shaped medieval fortresses, the thick Venetian defence walls were composed of many triangular bastions, designed to cover each other, and a ditch with a sloping glacis to deflect cannonballs.

Walking around the perimeter of Bergamo Alta it is easy to see the advantage of this type of fortification in case of an attack. Due to the elevation, the approaching enemy would have been exposed to fire from above. The walls were built of bricks that do not shatter on impact from a cannonballs. And in most places the walls are too tall to climb.

Fortunately, there is no need to climb the walls, as roads, pathways and a funicular connects the upper and lower parts of town, and once you have reached the top the views will captivate even those uninterested in the architectural requirements of military strategy. 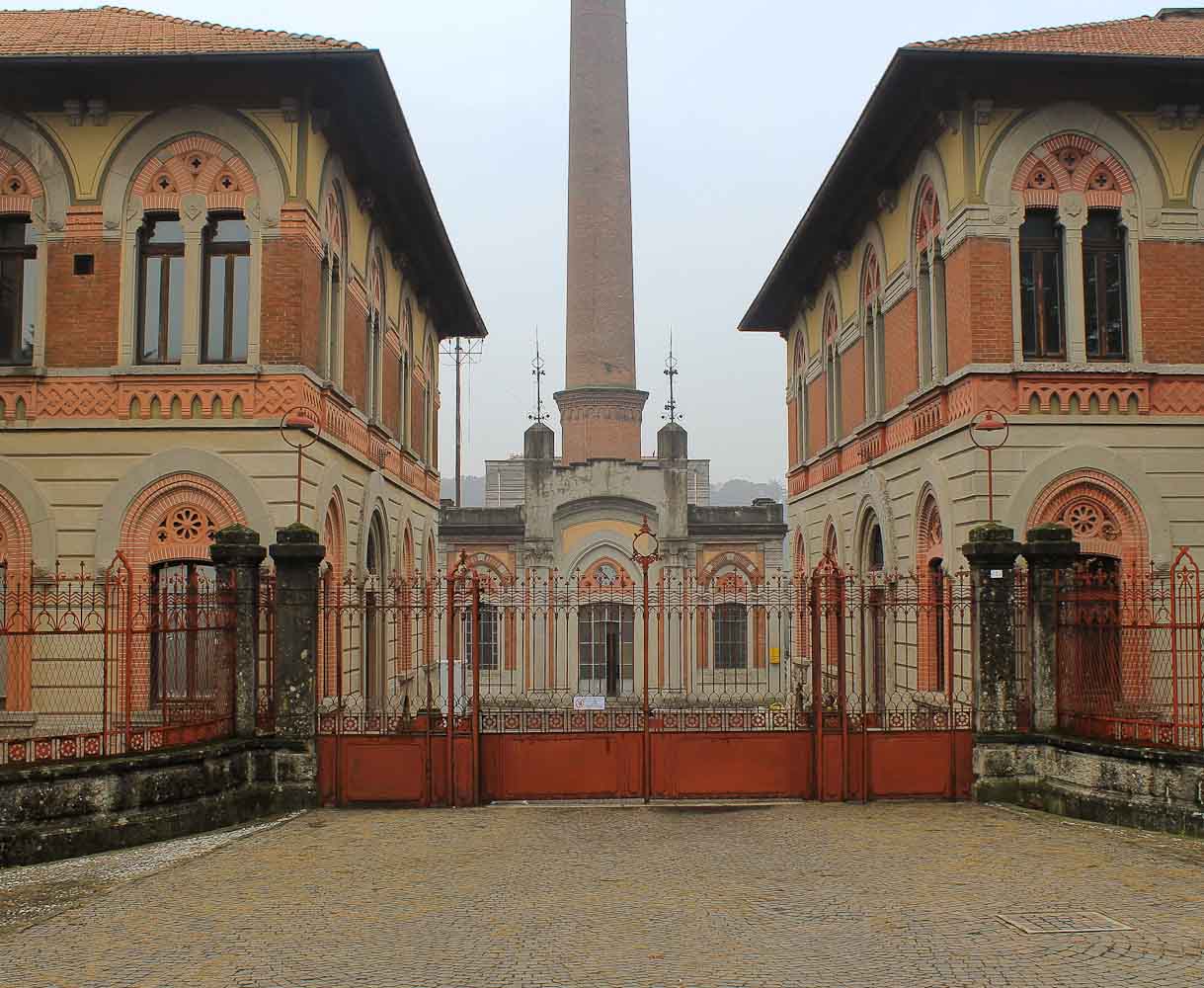 Every detail in Crespi d’Adda from railings, to windows and manhole covers has been designed to reflect the corporate brand.

The last stop on this 6 day itinerary to Unesco World Heritage sites in Lombardy is Crespi d’Adda. Crespi d’Adda has been Unesco World Heritage since 1995, because the remarkably intact village illustrates a significant stage in human history and serves as an outstanding examples of a human settlement from modern times. The village was built around a textile factory in the 1920s in order to ensure the employees a comfortable standard of living and easy access to all facilities from housing and lavatories to a cooperative shop, bank, power station, hospital, nursery, school, sports ground, church, graveyard and castle. Everything is laid out in a neat geometric grid of roads, and differences in the style of the houses reflect the position of the inhabitants in the factory.

In its prime, the factory employed some 3200 people, but it closed down in 2004, and today there are only about 450 inhabitants living in Crespi d’Adda, most of them descendants from the original workers. It’s a strange place and apparently the village hasn’t changed much over the course of the last 100 years. This means there are no restaurants or hotels to accommodate tourists, so you’ll have to stay in one of the nearby towns like Cassano d’Adda or Trezzo sull’Adda, which gives a final rural twist to you exploration of Lombardy. 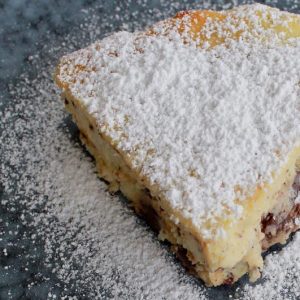 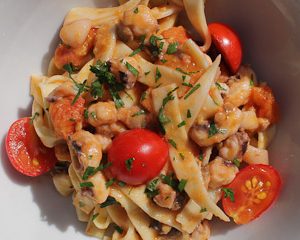