One of the most iconic drives in Tuscany is the SR2 from Siena through San Quirico d’Orcia to Montepulciano. The driving itinerary through Val d’Orcia offers 70 km of the most enchanting scenery.

According to Unesco Val d’Orcia deserves World Heritage status, because it reflects the way the landscape was re-written in Renaissance times to reflect the ideals of good governance and to create an aesthetically pleasing pictures. Furthermore the landscape of the Val d’Orcia was celebrated by painters from the Siennese School, which flourished during the Renaissance. Images of the scenery and people depicted as living in harmony with nature are considered icons of the Renaissance and have profoundly influenced the development of landscape thinking, so it was with a certain amount of anticipation and trepidation we set out from Siena in a small rented car.

The SR2 is a narrow road with relatively intense Italian traffic even on out-of-season weekdays, which means the driver should drive up to speed and remain fully focused on red brake lights and passing cars. In other words the itinerary is not cruising territory. Locals seem to need the road, they are probably going places, and some of them can get a little annoyed at slow moving tourists. Fortunately, the most adorable villages are scattered evenly along the road, so we decided to stop in every one of them and have a look around.

Buonconvento is a maze of arched alleyways and potted flowers.

First stop was Buonconvento after 27 km on a disappointingly ordinary stretch of road. Buonconvento means ‘happy place’, and it’s a fortified medieval town on the Via Francigena pilgrim route, located where the rivers Arbia and Ombrone converge.

Inside the walls the village appears as a maze of arched alleyways lined with potted flowers. There is a church, some palaces and a couple of museums. Flags divide the village into four tribal districts, but with a total population of just 3,137 people, there is not a lot of action around. We tried to walk the perimeter of the village, hoping to glimpse some rolling hills and cypress trees, but the surrounding landscape was mostly flat and agricultural.

One of the local cars in San Quirico.

Next stop on our driving itinerary through Val d’Orcia was San Quirico 18 km further south. A lovely medieval town on a hilltop with mostly intact fortified walls, which means that cars are left outside the city centre.

Although San Quirico is about the same size as Buonconvento, there is so much more to see, including a few of the photogenic cypress trees.

The scenery surrounding San Quirico is jaw-dropping idyllic in the vintage Tuscany sort of way, but you still need photography skills and heavy equipment to capture the most iconic Instagram moments. At least I found it difficult to get a straight shot of the landscape without disturbing power lines and lampposts, but then again I didn’t have the gps coordinates for a perfect view – or a driver willing to stop the car anywhere regardless of the traffic conditions.

The best vantage point we found was from a unmanned Tamoil petrol station on the edge of town, where a self-service pump swallowed our 100 euro note without releasing any petrol in return. The man responsible for sales was more than a phone call away, so we had at least half an hour to talk to locals and enjoy the view.

Val d’Orcia in the brown and burned autumn colours. The palette changes with the seasons.

From San Quirico there is only 10 km to the next village, which happens to be a Unesco World Heritage site in its own right. The historic centre of Pienza was remodeled in 1459 in accordance with Renaissance humanist town-planning concepts. In particular the buildings around the central square are considered a masterpiece of human creative genius, and it has played a significant role in urban development in Italy and beyond.

Unfortunately Pienza is threatened by the influx of tourism, so until an improved tourism management system has been implemented visits cannot be recommended. But the scenery around Pienza is absolutely stunning, and driving is a thrill with cars scattered along the roadside and people hiding in ditches and jumping out behind bushes with their telephoto zoom lenses poised and ready to shoot. Val d’Orcia is a very beautiful – and popular – place to visit, but around some bends of the road it should come with a selfie warning. 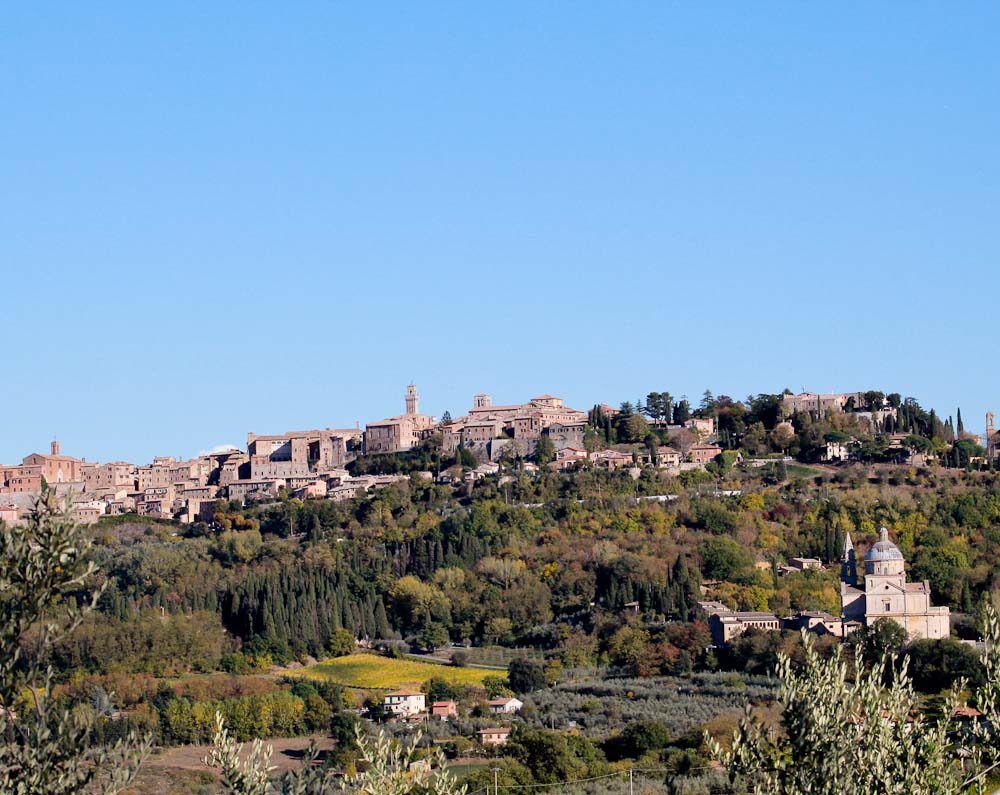 The itinerary ends in Montepulciano

Our driving itinerary through Val d’Orcia ended in Montepulciano, which is considerably bigger than any of the other villages in the valley. Still it has retained all the medieval hilltown charm with a historic centre of steep and narrow cobbled streets lined with restaurants and wine houses.

The whole drive from Siena to Montepulciano is only 70 km, but if you want to stop in all the small villages along the way, you should plan it as a full day trip. Alternatively you could stay in one of the Val d’Orcia towns or in an agriturismo in the countryside and make several excursions to explore the area and the villages. That way you would have all the time needed to wait for perfect weather conditions and find the best possible views depending on the season, the light and the time of day for a memorable photo shoot.