Dancing in the streets of Cosenza

Fair to say Cosenza and I got off on the wrong foot, but eventually I fell into the rhythm of the regional capital of northern Calabria and started to enjoy myself.
Booking.com


According to Lonely Planet ‘Cosenza’s medieval core is Calabria’s best preserved historic centre’ with side alleys that are ‘a study in urban decay’, but before we could explore the area and check out things to do in Cosenza, we had to get some lunch.

Our hotel was a mirrored monstrosity near a shopping mall 2 km from the city centre, so before check-in we visited a couple of cafes and asked for a bite to eat. In spite of the ‘pizza a taglio’ signs out front, the people in the cafes looked uncomprehending and pointed in different directions, so we ran around in circles for a while, until someone took mercy on us and explained, that lunch should be bought in a nearby supermarket and eaten at the free tables in front of the cash counter. A concept I hadn’t tried it before. Still, the takeaway lasagna and arancini were acceptable, and we weren’t the only shoppers taking advantage of the supermarket lunch spot. 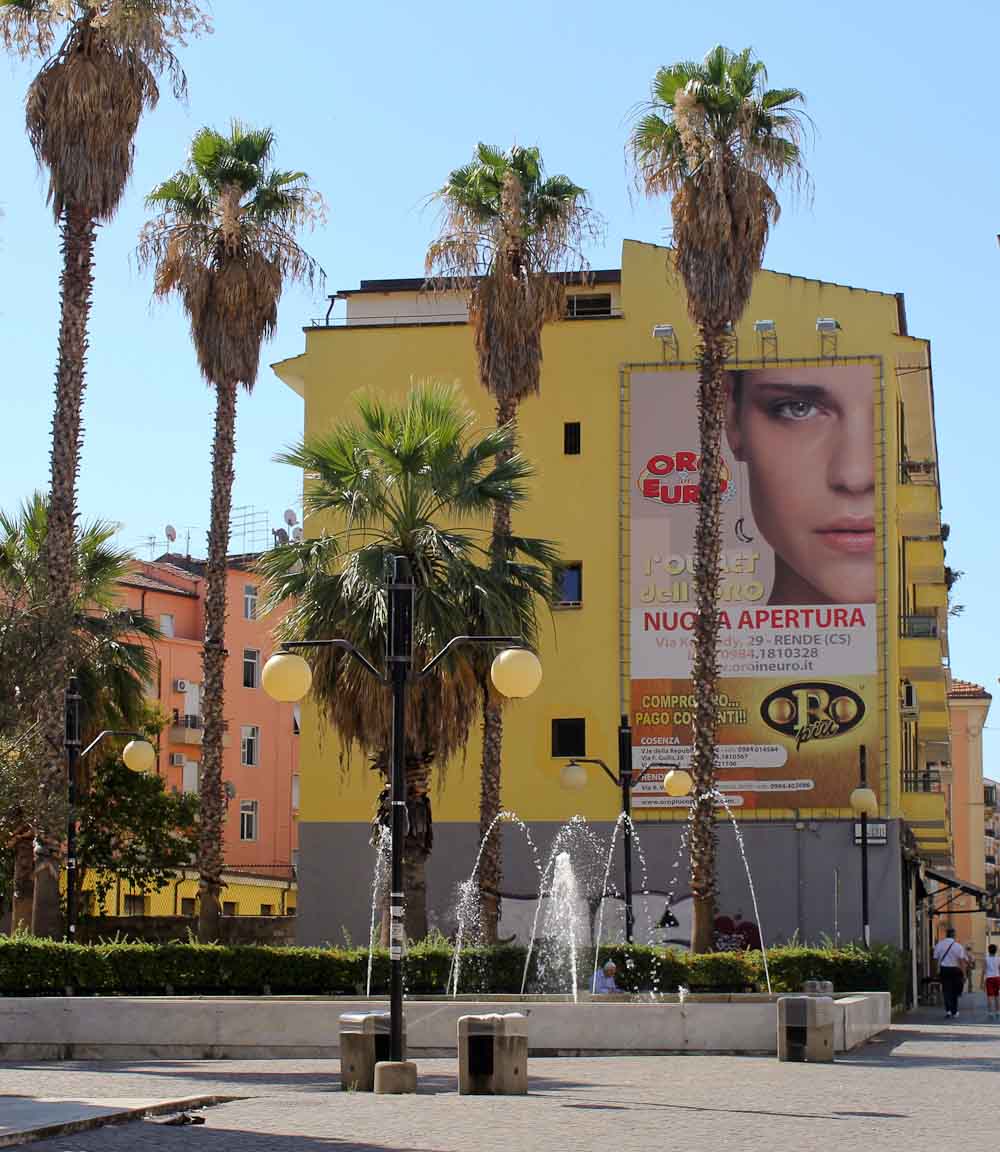 A colourful piazza close to the centre of Cosenza

An hour later we were ready to hit town and asked the hotel’s receptionist for directions. Unfortunately, he had a city map in front of him, which he did not turn around, so I came out with the geographic directions unaligned, and instead of turning right, we turned left from the hotel and kept walking.
To begin with it was just ordinary apartment buildings, but gradually the architecture became either indifferent or bizarre like the Sant’Antonio Church and the Skyline tower. I mean, who needs concrete pyramids and cubist tower blogs with 22 storeys in a town with a total population of just 71.000 persons? 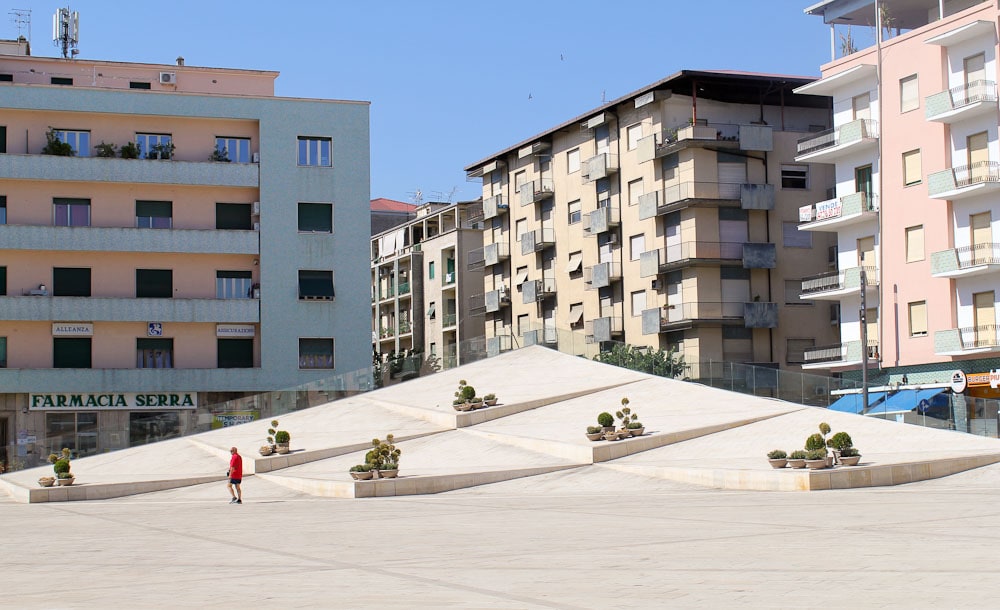 After having walked for hours in a desert of modern architecture the flying carpet of Piazza Bilotti came as a relief.

Getting Back on Track

After 6-7 km I started to doubt the existence of a centre in the European sense in Cosenza. Maybe earthquakes had levelled the entire region, so that all old houses had been replaced by suburban monotony. Too late we stopped someone to ask for direction, and after making it clear that it was not the centre of nearby Rende, we were looking for, he told us to get on a bus heading in the opposite direction.

We got off at the bus station a few hundred meters from Piazza Bilotti, which marks the start of one of the longest pedestrian streets in southern Italy. Again I was struck by the modernity of the urban spaces. Piazza Bilotti looks like a flying carpet with upturned corners and grey pattern of square paving tiles that has landed somewhere in a tree-less desert. There is no shade and no colours to break the monotony. In a corner, a group of rusted iron cut-outs hints at the artistic aspirations of the place. 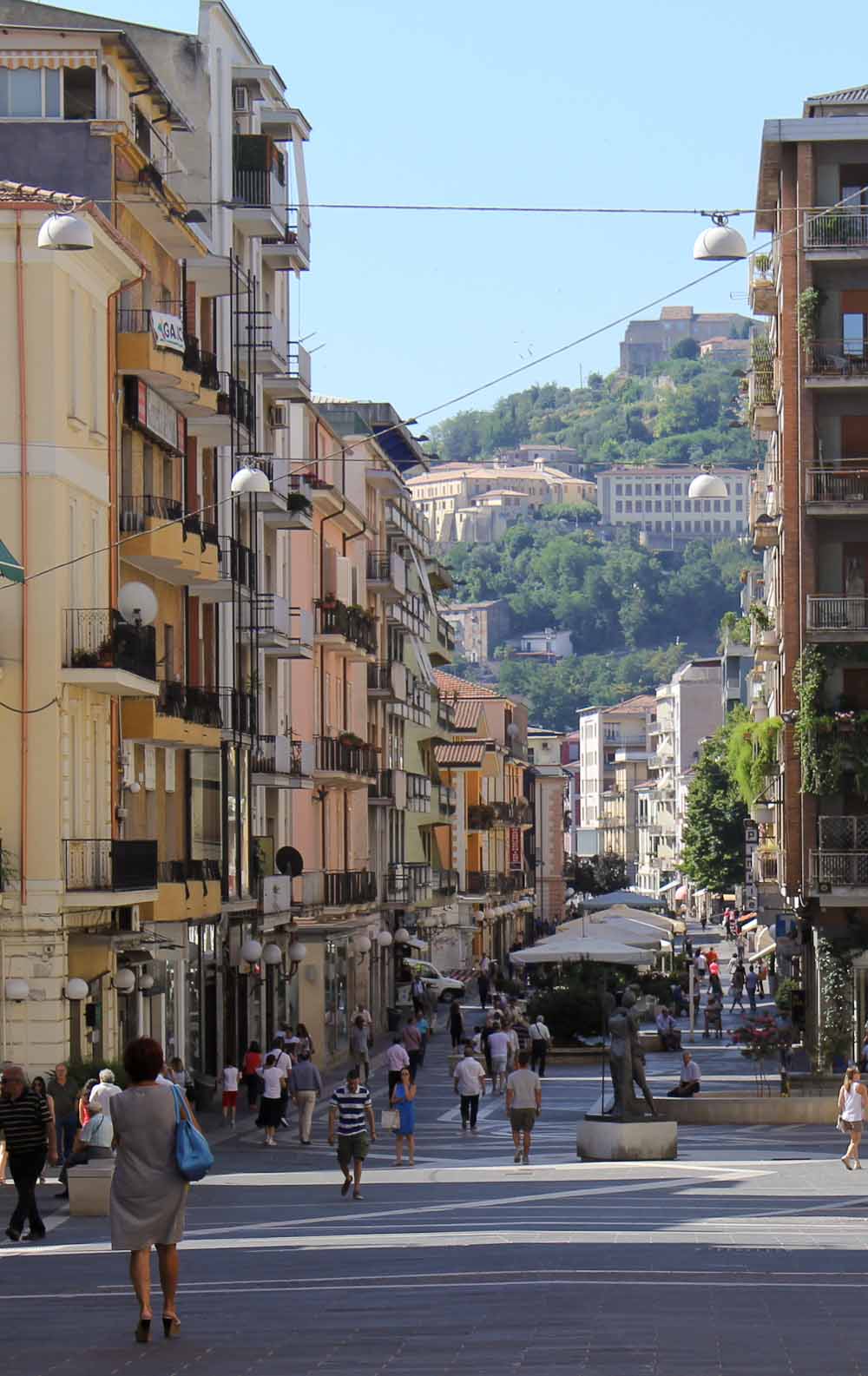 An open-air museum and a digression

The pedestrianized Corso Mazzini serves as an open-air museum with 19 sculptures by such Italian sculptors as Giacomo Manzú, Giorgio De Chirico, Mimmo Rotella, Emilio Greco and Pietra Consagra. A few of the sculptures are by internationally acclaimed artists, which means that you can now see San Giorgio slay Salvador Dali’s dragon in front of H&M, while a group of young men hang around Amadeo Modigliani’s Caryatid.

We decided to save the open-air museum for the next morning, and hurried on to the Ponte Alarico where the rivers Busenti and Crati merge. It is said that the Visigoth Alaric I, who sacked the city of Rome, died in Cosenza in 410 AD and was buried with all his treasures at the confluence of the two rivers, but that’s a digression, because I badly wanted to see the old city before night fall.

We hurried past the fast food outlets along the river banks and headed up the winding Corso Telesio. All the shop fronts were boarded up apart from an instrument maker specializing in pizzica guitars. The tenements were in a crumbling state of disrepair, there were few people around and fast cars speeding up the hill made it necessary to jump aside in every other door opening. The atmosphere was strained and did not seem to welcome further exploration of the narrow alleys, so we kept to the main road and stopped by the cathedral. If we had continued a little further, the medieval town would have opened up to a charming square with the beautifully restorated Palazzo del Governo and a cute salmon-coloured theatre and on top of the hill we could have enjoyed magnificent views from the ruins of an old Norman castle, if we hadn’t started out with a detour to suburbia and lost the daylight along the way. 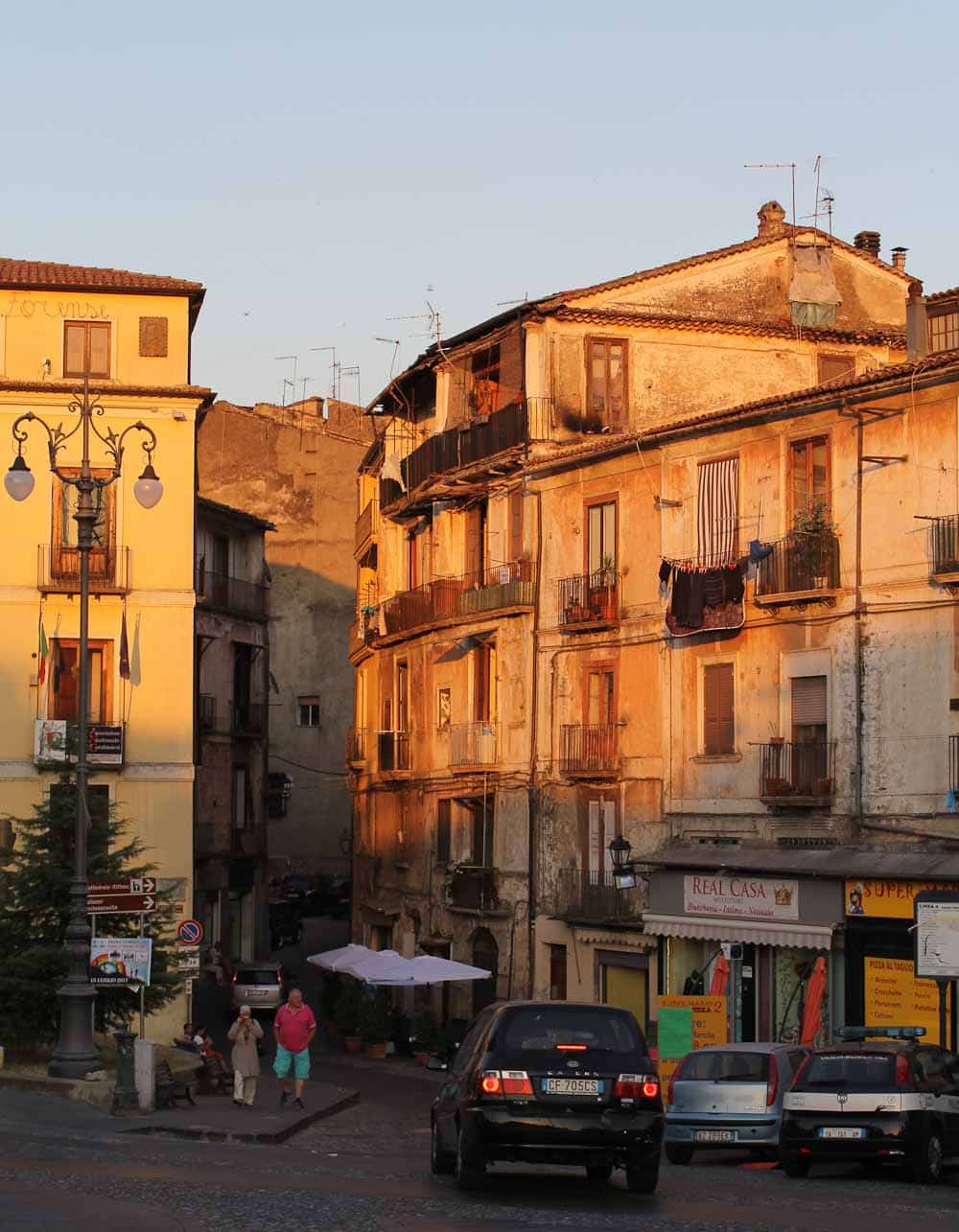 The decay is real in the historic centre of Cosenza, and I would not recommend wandering off Corso Telesio after dark.

The Magic of Cosenza

Back on the other side of the river, we happened to find the tiny Trattoria Il Paesello which served the most wonderful pasta with Rossano liquorice and chili tomato sauce. While we sat in the street under a supermoon, the grievances of the day slowly faded away, and I started to enjoy the magic of Cosenza.

The sentiment grew, when we strolled back up Corso Mazzini. It was around midnight, and as always in southern Italy, the street was full of families eating ice cream and bumping into relatives and friends. When we came to Piazza Kennedy loud salsa music sounded from the café and young and older people were practicing their moves. At that point we had walked a half marathon, and my feet were killing me, but the atmosphere was contagious, and I couldn’t wait to experience more of Cosenza the next day.