My 12 euro cruise along the Amalfi Coast

A cruise along the Amalfi Coast does not have to cost a fortune. But don’t expect to get pampered with anything more luxurious than the view.

The ferry sailing locals and tourist from Salerno to Amalfi and Positano lies at the end of a long quay off Piazza della Concordia. It’s a medium sized passenger boat with no frills apart from rows of benches and an open top deck. There are four departures every morning and two in the afternoon, and being among the first to arrive we were able to secure seats right up at the front. 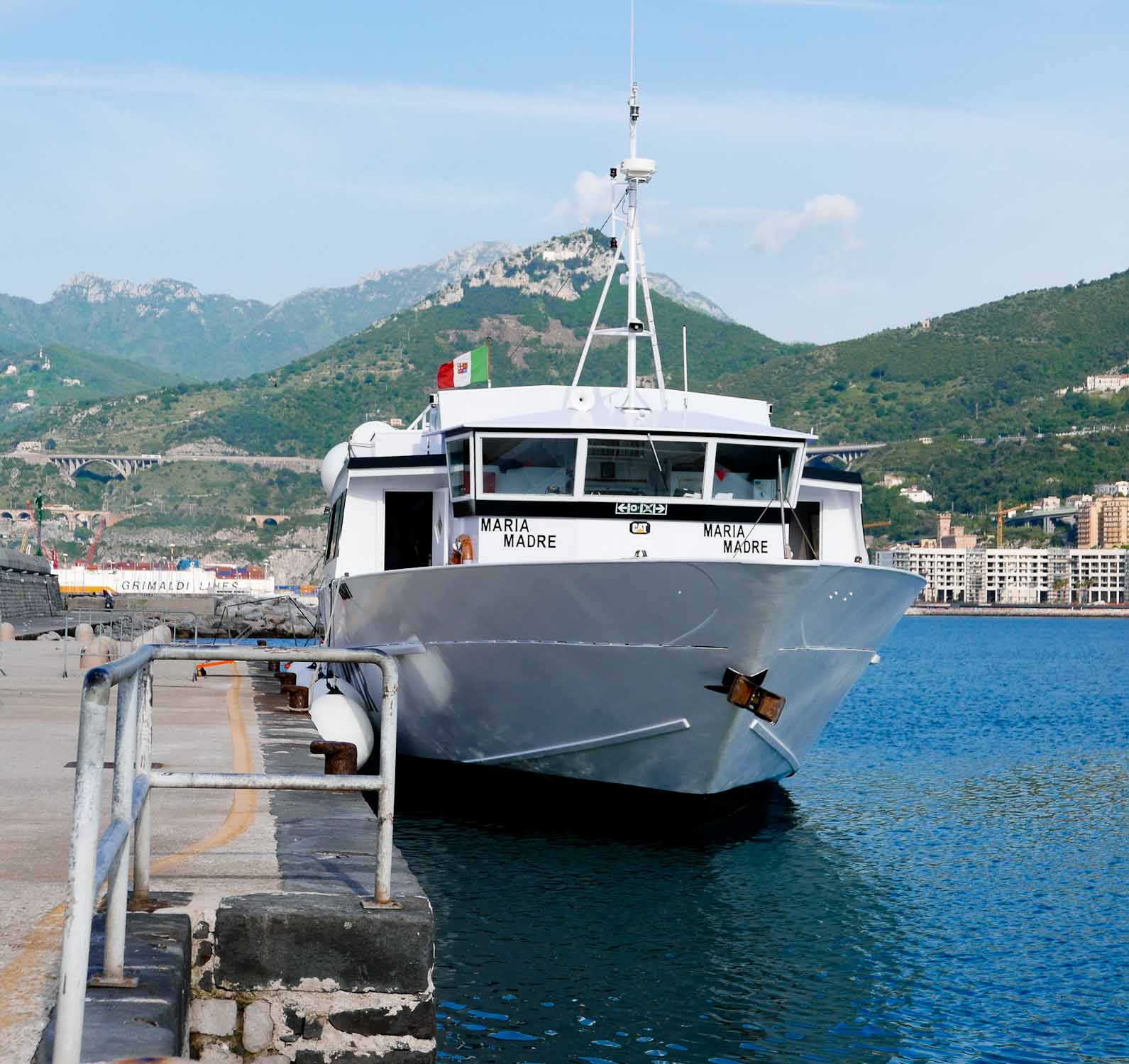 The ferry sailing passengers from Salerno to Amalfi and Positano

It was a beautiful mild and clear day in the early spring and we enjoyed identifying landmarks like the castle and the bridges of Salerno and seeing busloads of tourists come trudging along for the cruise. Even out of season, the ferries can get pretty full, so it might be a good idea to book tickets in advance.

The boat left Salerno almost on schedule and we sailed out past the port, where a Brazilian container ship was being unloaded beside the car ferry to Malta. The port of Salerno is neither particularly big nor busy compared to eg. Naples and Messina, but it is still in business. 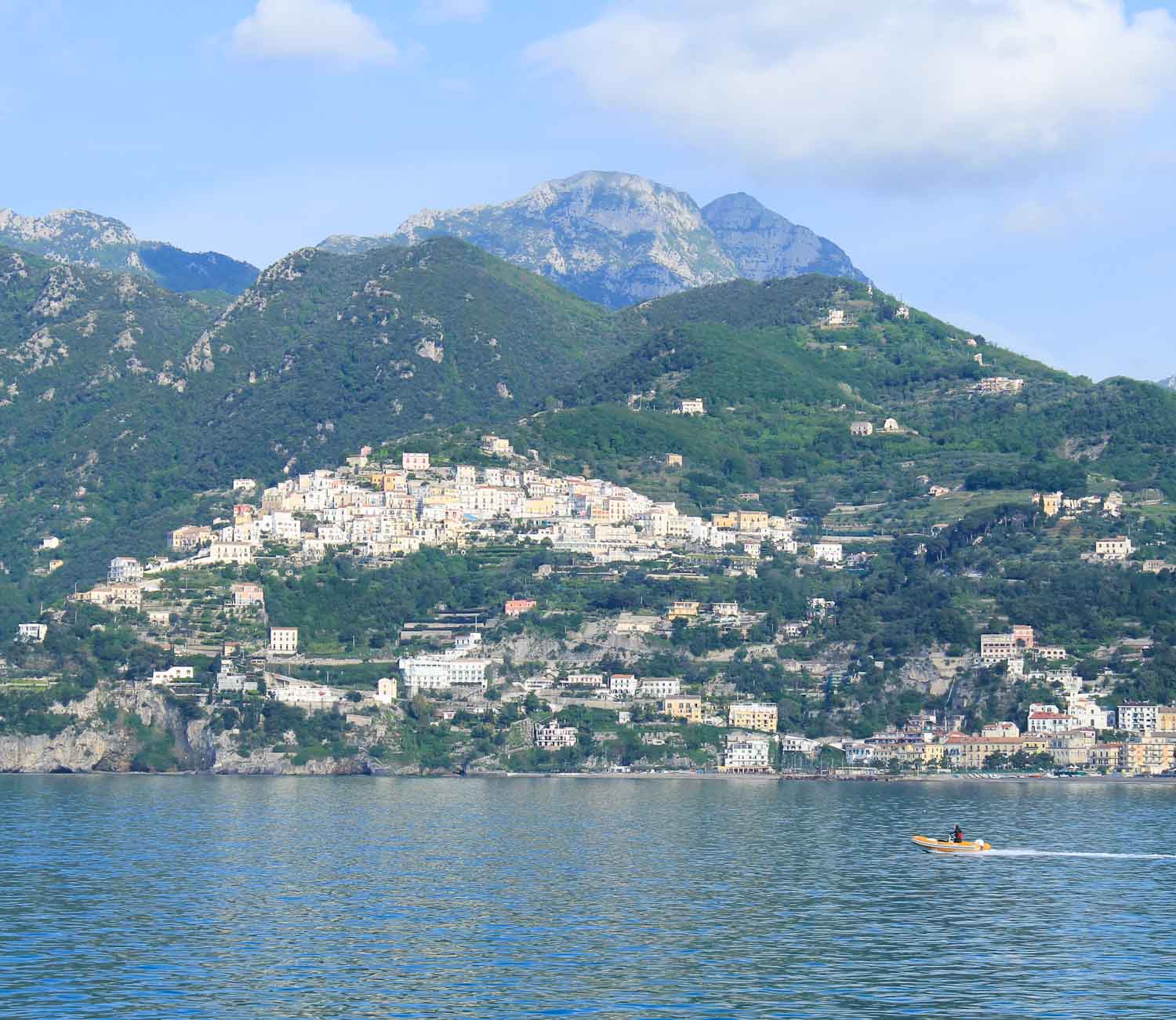 The first village after the boat has left Salerno is Vietri sul Mare.

Seeing the villages from a distance

On the way, the ferry to Positano only stops in Amalfi, but we had fun trying to identify the villages along the coast from a distance. The first of course being Vietri Sul Mare that shone white in the morning sun just a short distance from the port of Salerno. 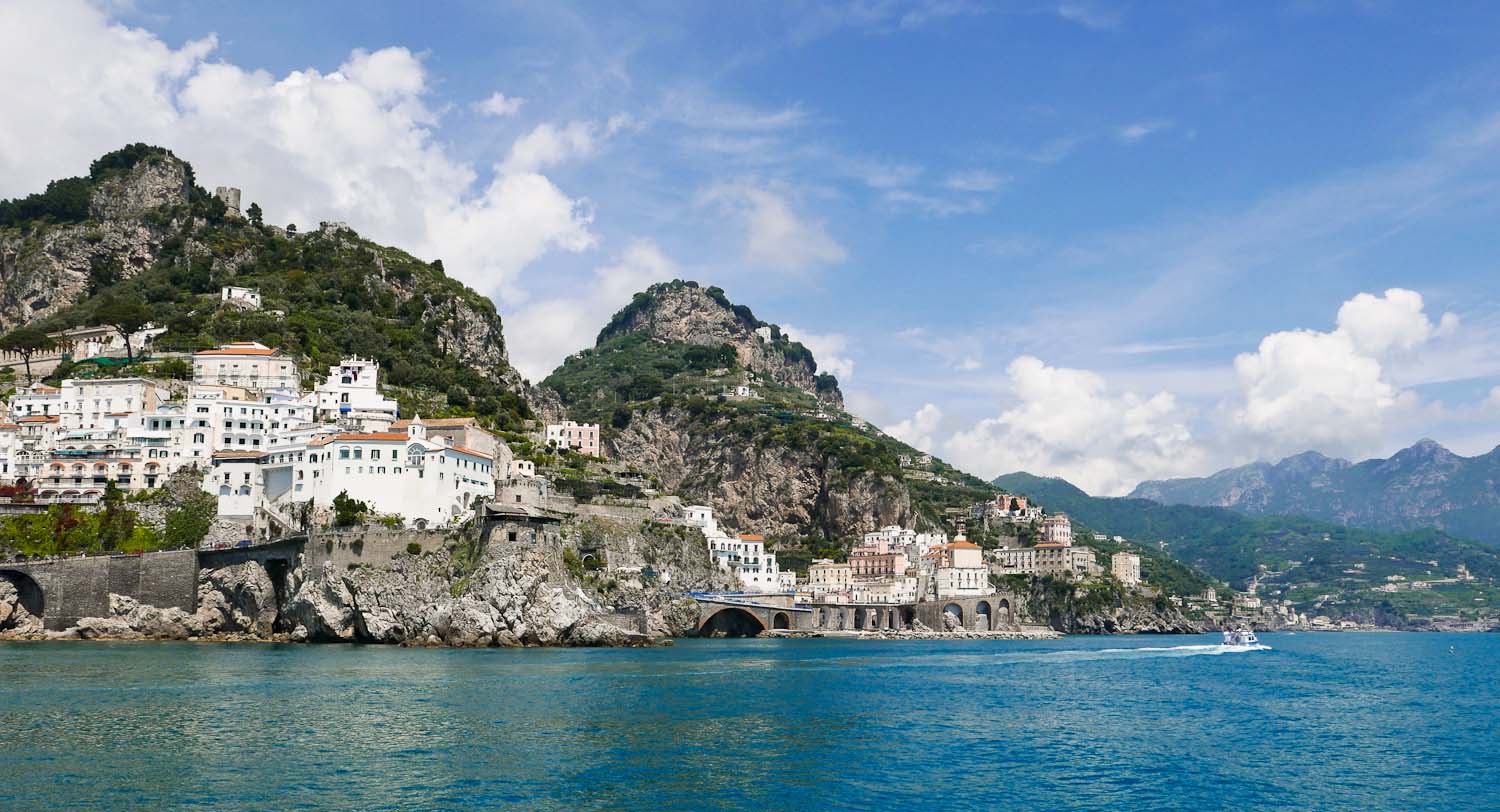 There’s lively traffic of small boats along the coast.

There was Cetara and Erchie with watchtowers that had been converted to habitation, blind-arched concrete preventing the steep sides of the village from gliding into the sea and the characteristic church domes with tin-glazed majolica tiles that glinted green and yellow.

After we had rounded Capo d’Orso followed by Maiori and Minori the landscape became wilder with barren and rugged mountain tops. The blue skies clouded over temporarily, but after an hour we reached Amalfi, where about half the passengers disembarked and new ones got on board. 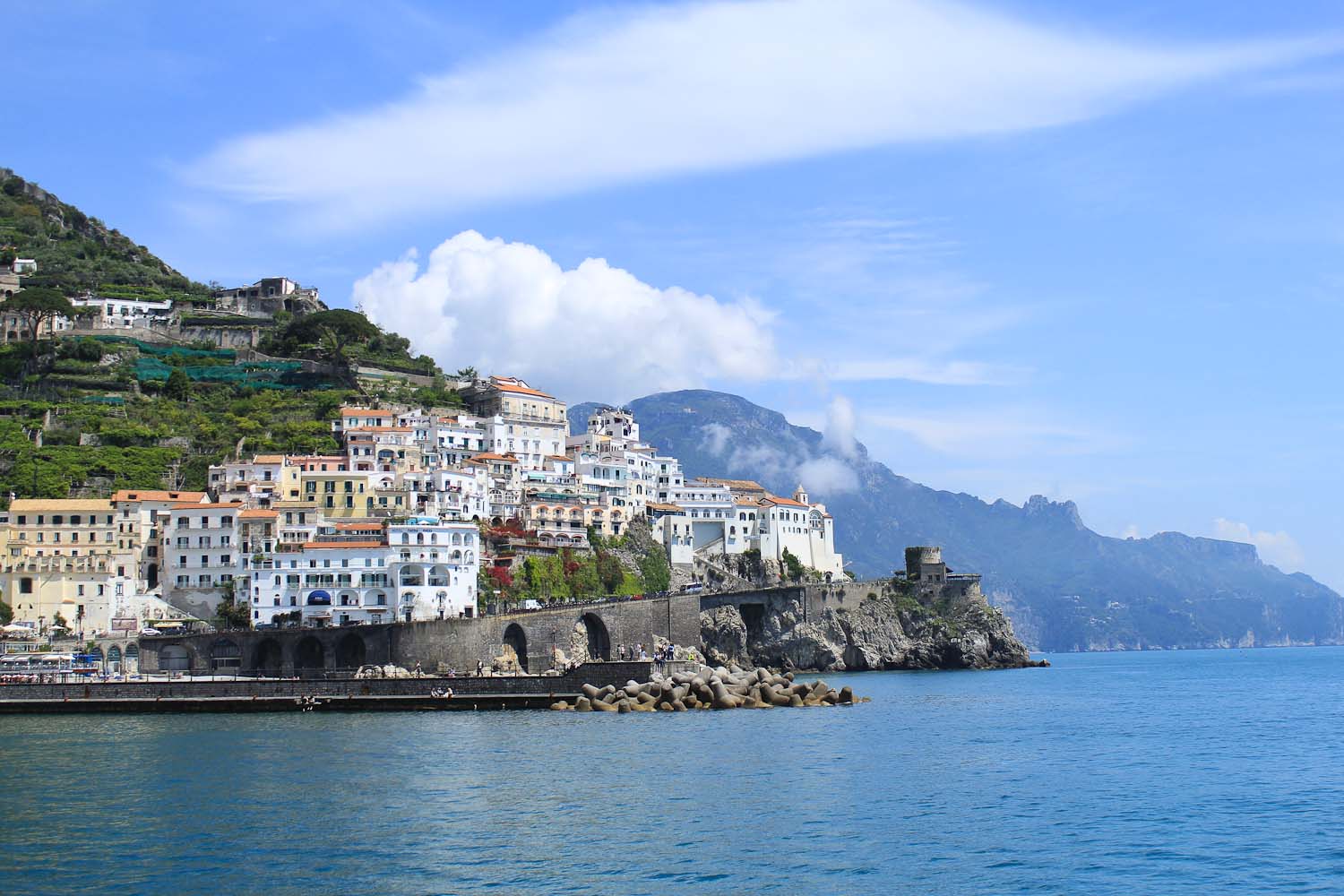 There are plenty of villages, watchtowers and interesting landscape formations to be seen along the coast.

A landscape of dolphins and butterflies

We continued for another half hour past Conca dei Marini with the Grotta dello Smeraldo with which is famous for brilliant blue or emerald light that floods the water just like the Blue Grotto in Capri. The fascinating light could not be glimpsed from a distance, but there were several karst sea caves along the coast as a reminder of things to explore.

There were party boats, diving boats and the odd fishing boat sailing by, and although we did not get close to the dolphin shaped Galli Islands we did see them from a distance along with other tiny outcrops protruding from the water like the scoglio dell’Isca islands. When we finally arrived in Positano that sits like a butterfly over two hill tops, the sun broke through, and we felt we’d had the most perfect two-hour cruise ever. 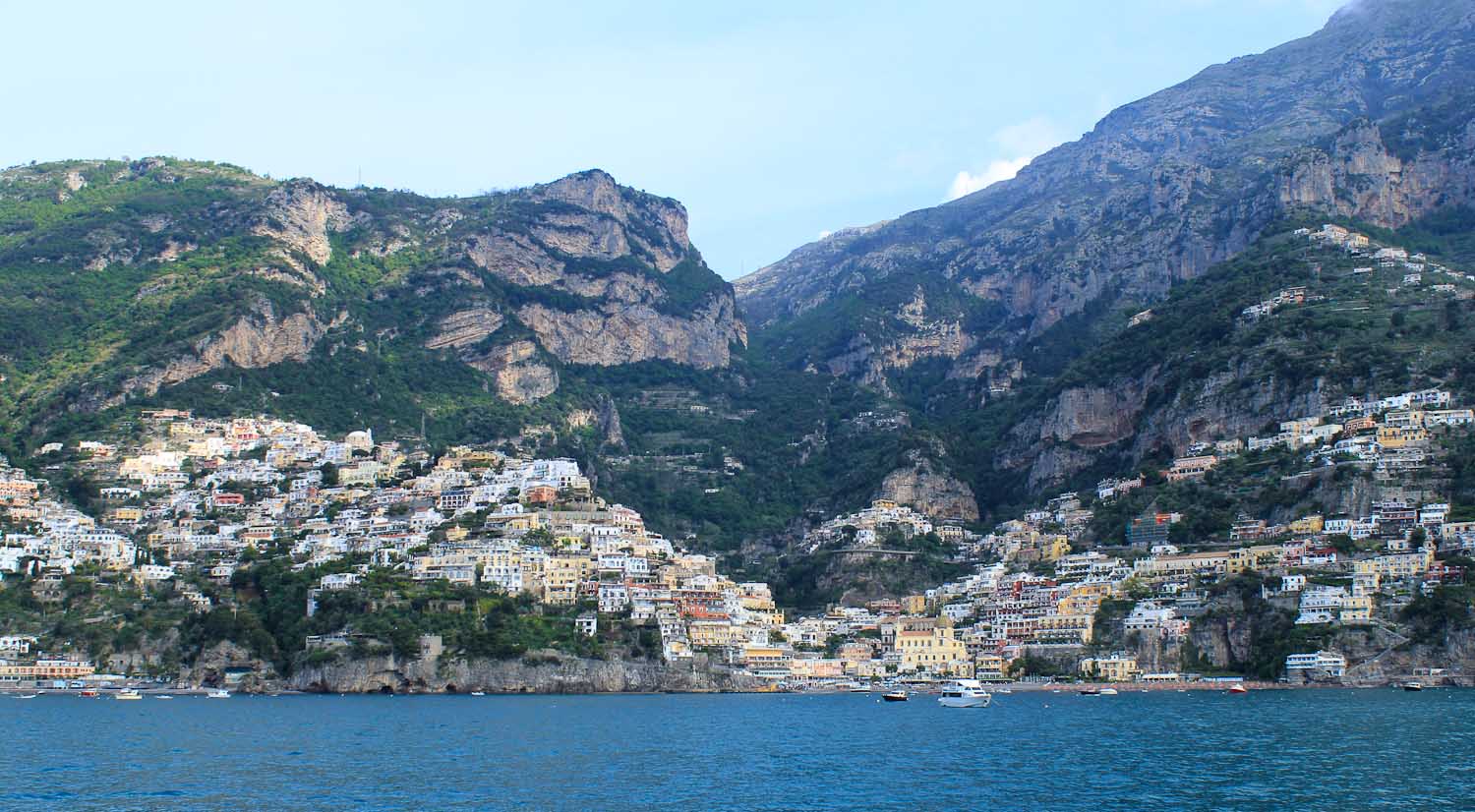 Positano spreads out over two hill sides like the wings of a butterfly.

10 gifts with a taste of Italy
Scroll to top