Drive along the E55 from Venice to Rimini and you will suddenly find yourself crossing the Rubicon.

When travelling in Italy you are constently stumbling over pieces and places of history. Take a drive along the busy E55 from Rimini and Venezia, and you will suddenly find yourself crossing the Rubicon. A small bridge over a placid looking stream, which may or may not be identical with the mighty river the Roman Legions feared to cross, does not look like a point of no return, but 2000 years ago is constituted the northern boundary of the Roman Empire, and any general who crossed the river with an army of men, without permission from the Senate, committed rebellion.

In the year 49 BC after careful deliberations, Julius Caesar ordered his men to cross the Rubicon, and said the famous words “alea iacta est” or “the die is cast”. With the act and a gambling metaphore Caesar started a violet civil war from which he emerged as the unrivaled leader of the Roman Empire.

At that time Roman armies were in the habit of making sacrifices to the river god, when crossing a river into enemy country. In this instance, Caesar was said to have set out a herd of horses that were left free to roam along the banks of the Rubicon. Five years later when Caesar was assassinated in Rome, people swore that they had seen these noble creatures refuse to eat and weep mournfully, while standing in their pastures.

Today you have to be extraordinary lucky to spot weeping wild horses, while crossing the Rubicon, and as long as you abide by the traffic rules no one will take up arms to prevent you from going one way or the other. Just remember that there is a nice beach around the place where the Rubicon flows into the Adriatic Sea, so if you are passing in the summer months, you might want to stay a while and think about the time, when men in sandals were not just defending the territory of their beach towel.

After crossing the Rubicon you might want to see 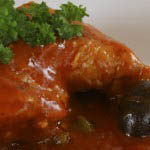 Carneval in Rome today and 165 years’ ago
Scroll to top