What is the meaning of cow skulls decorating old buildings, like the Palladio arches in Udine and San Daniele del Friuli?

I normally associate cow skulls with western films and Americana, so it came as a surprise to discover the symbolism in an idyllic town in Friuli-Venezia Giulia. It was a drizzly summer day around noon, and we had a couple of hours to get a taste of the local ham capital, San Daniele del Friuli, before heading north across the Alps. 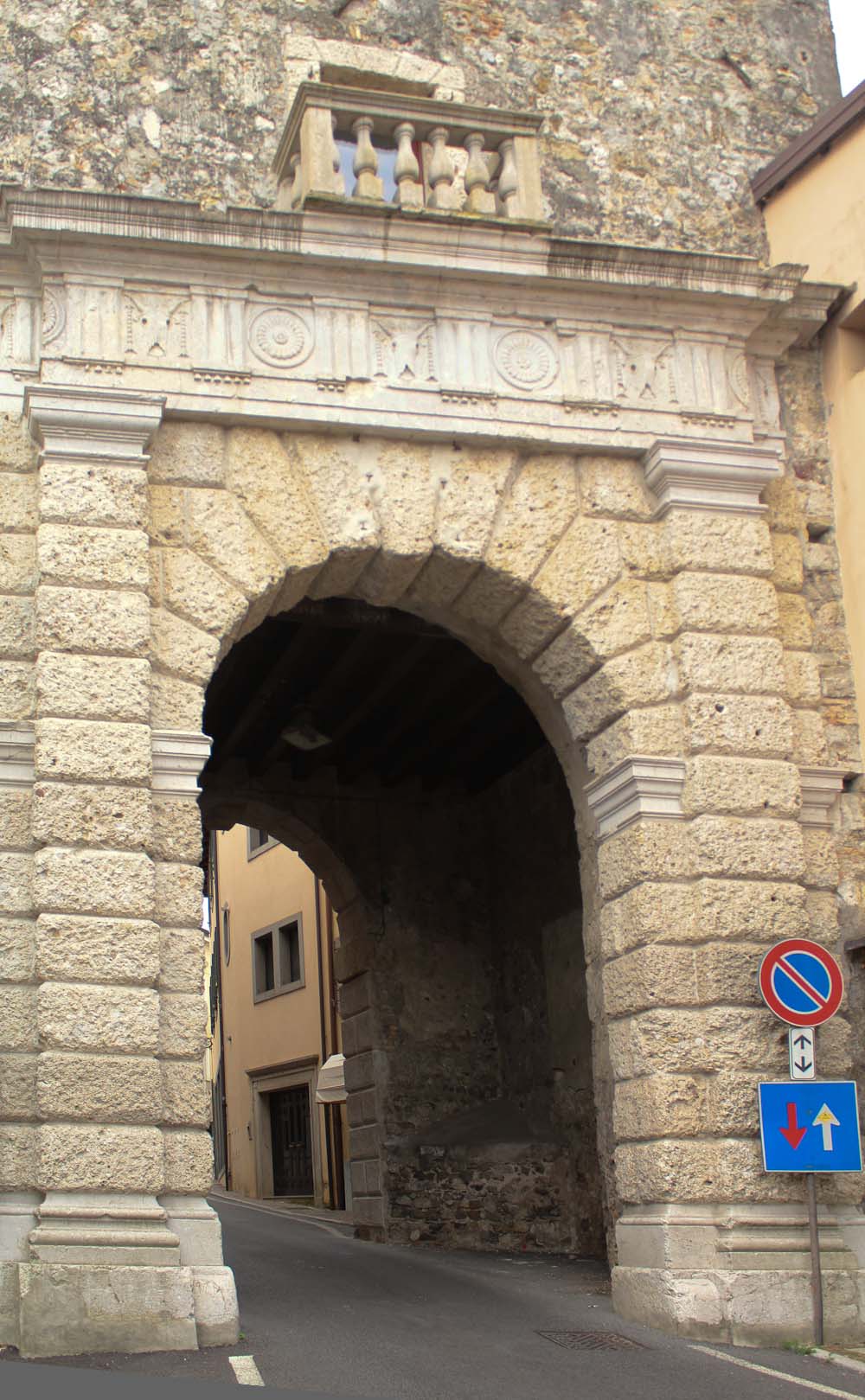 I didn’t find Palladio’s arch in San Daniele particularly interesting, before I noticed the cow skulls in the frieze.

San Daniele del Friuli isn’t a big town, but it boasts a Palladio structure, a narrow arch or gateway in the old city wall known locally as the Portonat. We found the Portonat on the other side of a contemporary, ham-coloured house by following a road sign indicating the direction of Austria. Seen from the other side, a Medieval watchtower replaced the painted plaster and the gate became an arch with the Roman-ness that has come to signify Palladio. I shrugged. The Palladio arch didn’t seem particularly interesting or significant, but I wondered about the repeated pattern of cow skulls and flower circles decorating the frieze above the entrance. What on earth were they supposed to signify?

At that point something else happened, and I forgot all about the mysterious signs on Palladio’s arch in San Daniele, until the next time we visited Udine, and I noticed that the Arco Bollani leading from Piazza Libertà up to the castle hill was almost identical to Palladio’s arch in San Daniele. If it wasn’t for the winged Venetian lion scouting over Udine and a centre plate with an inscription, I’d be hard pressed to tell the two Palladio arches apart.

On closer inspection the frieze on Arco Bollani was slightly more stringent, the cow skulls had a simpler, pennant-like garland decorating the horns and there were no flowers in the circles. I made a note to myself to find out more about these Palladio arches. 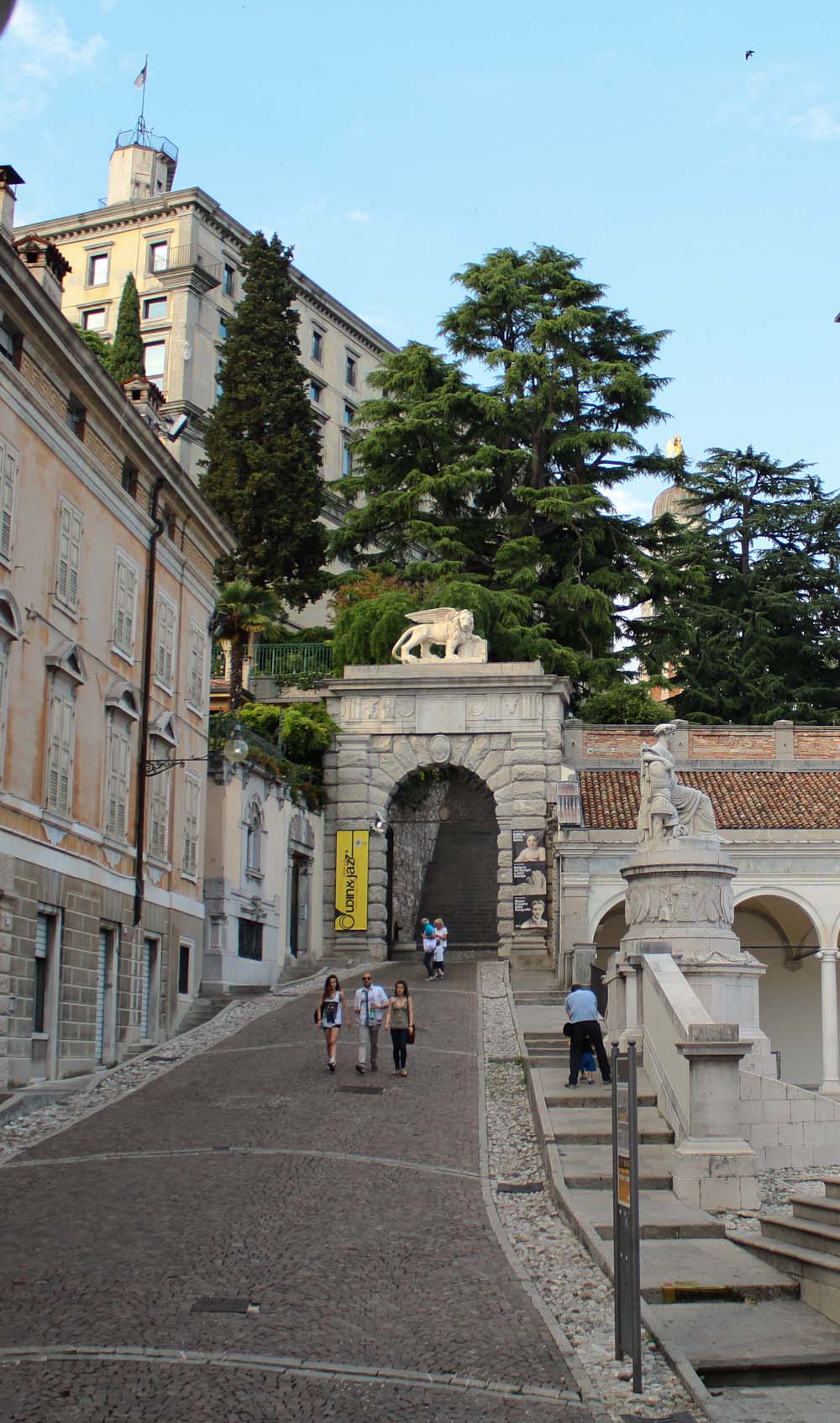 Arco Bollani in Udine is a little older that the Portonat in San Daniele, but the two arches are almost identical.

Research revealed that Arco Bollani in Udine was erected in 1556 in honour of Bishop Domenico Bollani, who had saved the city from hunger and plague, as commemorated in the Latin inscription on top of the arch, while the Portonat in San Daniele was completed 23 years later in 1579, just a year before Andrea Palladio’s death.

Another architect, called Andrea da Venzone, had initiated the project of rebuilding the gate in San Daniele, after the original had been destroyed in an earthquake in 1511, but when Andrea da Venzone died in 1578, Palladio took over. And he may have been too weary to invent something new or so satisfied with his previous design in Udine that he decided to replicate it with a few extra, jazzy details. 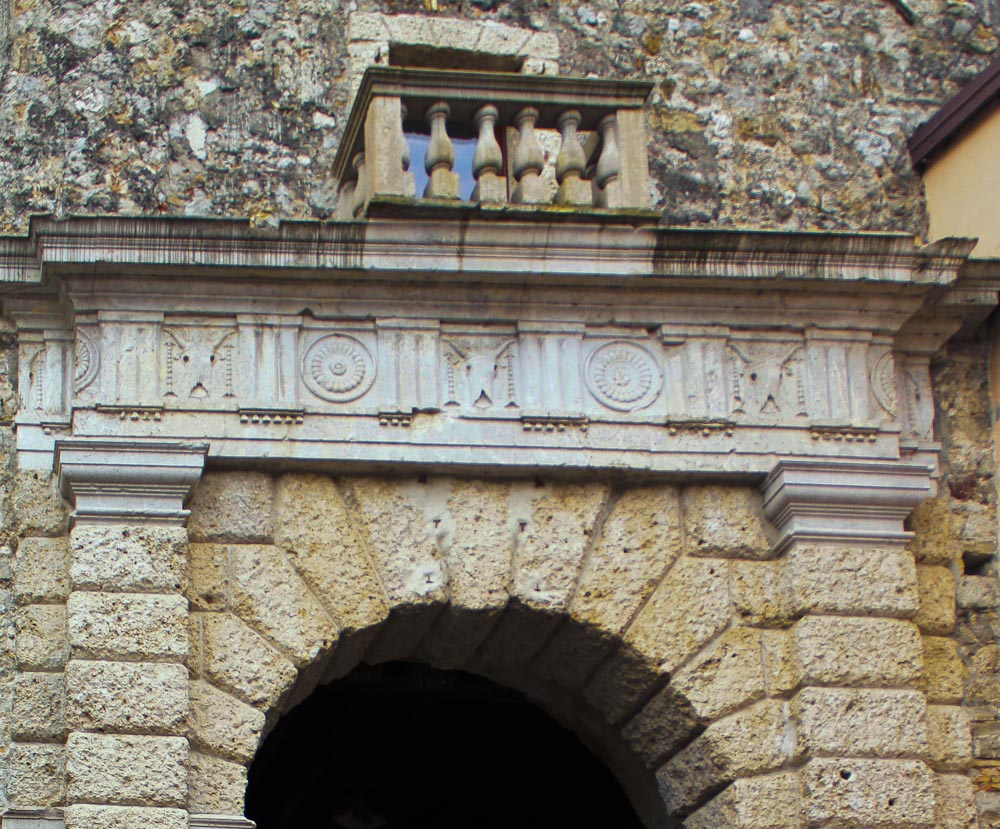 The bucrania, which is the architectural term for cow skulls, is an ancient motif that can be traced back to pre-Roman times. They were first used as an allusion to pagan sacrificial rites. In ancient Greece and Rome each god required a specific animal in sacrifice, and the cattle were decorated with garlands of fruit and flowers or tasseled ropes. Just before execution sacred wine was sprinkled on the animal’s head, which explains the circles in-between the bucrania. The circles symbolize shallow plates or paterae used as ceremonious wine containers. When the animals had been sacrificed, their skulls were hung on the temple as a sign that the gods had been appeased.

Later sculpted heads replaced defleshed skulls in the friezes, and this tradition continued after people converted to Christianity.

With the fall of the Roman Empire, the use of bucrania died out, but it was rediscovered in the Renaissance as a hallmark of class and style. According to The Classicist Blog, Palladio incorporated bucrania along with paterae in the metopes of his generic Doric order, and the originally pagan motifs became emblems of architectural pedigree and authority.

In consequence, you can find bucrania with paterae not just on Palladio’s arches in San Daniele and Udine, but also in his villas and palaces in Vicenza and elsewhere. And it’s great fun to walk around trying to spot them.